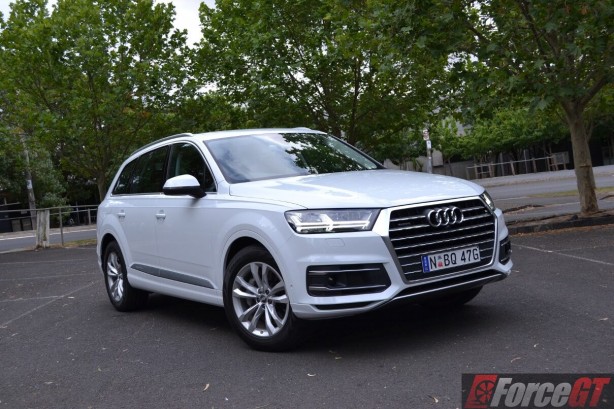 The Q7 is the first SUV offering from Audi and went on sale in 2006, nine years later than the Mercedes-Benz ML and seven years behind segment leader BMW X5. It was a bit of a behemoth and left much to be desired in the handling department.

Almost a decade later, the second generation Audi Q7 is finally here. And from the outset, it definitely looks less ghastly than the old model. On paper it seems to have got things right, too. Well, it must, considering how much time Audi had to get this to market.

Prices for the new Q7 start from $103,900 plus on-roads for a range that has been simplified to just one engine offering. The 3.0-litre V6 turbo diesel is now the only powertrain available, with Audi dropping the 4.2-litre V8 turbo diesel citing negligible demand.

The 3.0-litre supercharged V6 petrol offered previously will also not make it to the Australian line-up for similar reason. However, a thrifty version of the 3.0 V6 turbo diesel, which is currently used in the Volkswagen Touareg, is under consideration for the Q7. 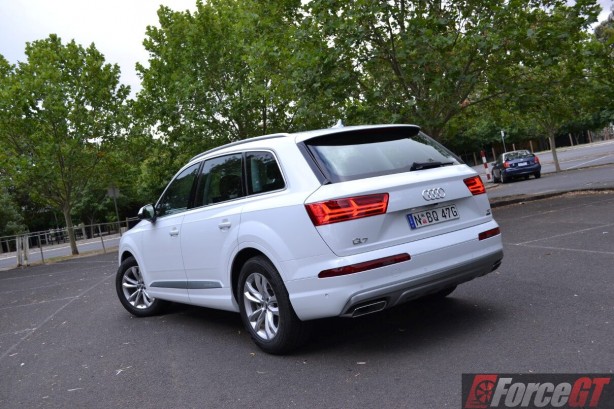 If the Q7 was launched two years ago, it would look alright. But amongst its rivals – the modern BMW X5 or the edgy Lexus RX – the supposedly ‘new’ Q7 looks rather tired already.

While there’s no doubt the Q7 has done a better job in concealing its size, it struggled to bring fresh design cues to the table in our opinion. It seems that Audi designers have had too much use of their ruler. It wouldn’t hurt to have some curves, Audi?

And strangely, the Q7 seems to look better in photo than in metal. Nevertheless, the SUV sports an evolutionary styling and adopts the brand’s latest single shield grille that first made its debut on the Audi Crosslane Coupe concept. At the back, the new taillights have lost its round edges and appear more chiselled. The Q7 still needs the optional 20- or 21-inch wheels to look its best.

In sharp contrast to the exterior, the Q7’s interior is amazing. And we really mean amazing. The cabin looks to be lifted straight off Audi’s latest concepts and what a place to be in. It looks superbly classy and features the premium brand’s latest “virtual cockpit” digital instruments and a new steering wheel. 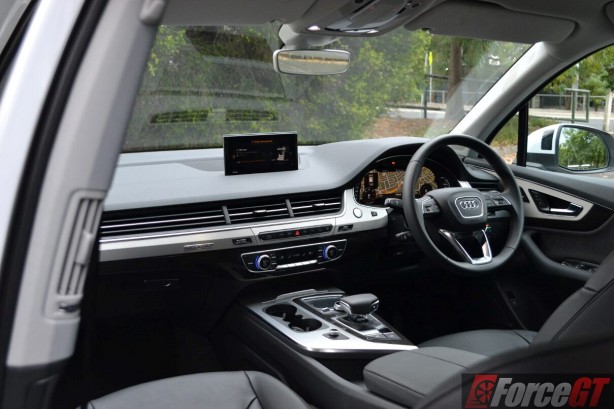 The brand’s interior of late has gone from excellent to class-leadingly brilliant, and the one in the Q7 is the best interior we have seen from Audi so far. It’s the kind of cabin you’ll be happy whiling the hours in on long country drives. Road and wind noise is very well suppressed and the seats are sumptuously comfortable though the standard seats are lacking a little side support.

While the extra space is good news for front and middle row occupants, those in the third row will still find the rear seats cramped.

The new Audi Q7 is powered by a comprehensively updated 3.0 TDI V6 engine that produces 200kW and 600Nm, 20kW and 50Nm more than before. With maximum torque on tap from just 1500rpm (down from 1750rpm in the old engine) the Q7 gets up to pace effortlessly aided by the fast-shifting eight-speed automatic gearbox. The diesel is generally muted and far from coarse even when sent high up in the revs.

The rest of the drivetrain is all-new and with heavy focus on efficiency. A new quattro centre differential is integrated into the transmission, making the entire all-wheel-drive setup 20kg lighter than its predecessor. Sophisticated vibration dampening solutions allow very low engine idle speeds of as little as 850rpm without affecting refinement. The start-stop system cuts the engine even before the car comes to a complete stop, when the required braking parameters are met. 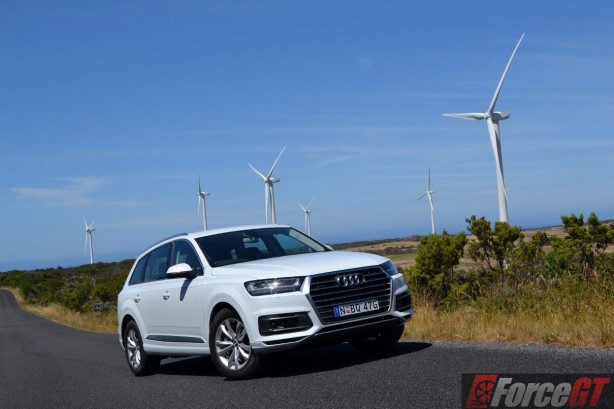 Tipping the scale at 2,135kg, the Q7 is some 300kg lighter than its predecessor. Audi claims the new Q7 is the lightest in its class, thanks to the use of ultra-high-strength steel forming the backbone of the occupant cell and aluminium castings for the doors, front and rear sections as well as the superstructure.

The lighter weight improves everything from acceleration to fuel economy. 0 to 100km/h acceleration is accomplished in just 6.5 seconds (claimed) while combined fuel consumption is rated at 5.9L/100km.

It helps in the twisty bits, too, as the Q7 now has a new found level of dynamism. Our test example came equipped with the adaptive air suspension and it’s not only comfortable around town but also delivers a much greater level of sportiness around the bends.

There are five modes to choose from – Efficiency, Comfort, Automatic, Dynamic, and Off Road. The ride height varies depending on the mode chosen and the electronic dampers adjust to the ideal tuning required to unite the apparently conflicting qualities of comfort and handling.

Body roll is well suppressed and road undulations are absorbed with great stability. The steering is smooth and easy, with just enough feedback. The brakes, however, tend to be inconsistent and lacking in feel. 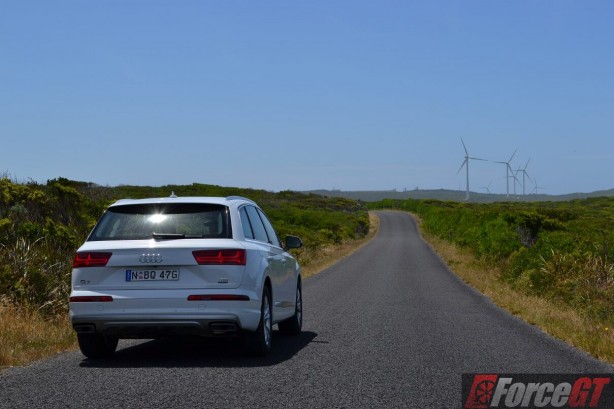 Audi consistently excels in this area and the Q7 is no exception. Its interior is no doubt the benchmark of the segment. High quality brushed aluminium trim adorn the cabin, complemented with high gloss piano black trim pieces.

Then there’s the ambient lighting, which is composed of thin light tubes and LED light strips embedded around the cabin. While those of its rivals are customisable between three or four colours, the ones in the Q7 offer a full colour palette with 30 shades. And boy do they look fantastic at night. 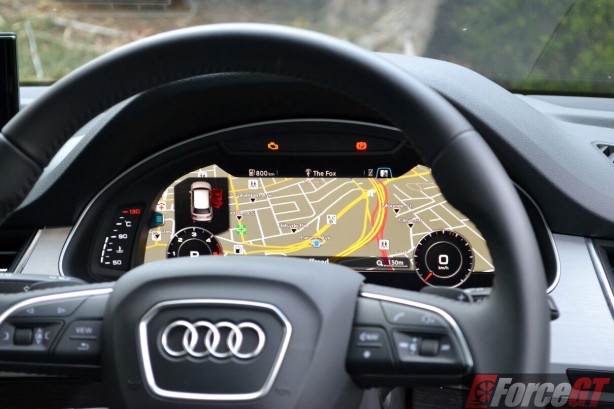 However, the electronics is an area still requiring attention as the side mirrors in our test car occasionally refused to return to their normal position after dipping down while in reverse.

According to Audi the Q7 is 20 per cent more fuel efficient than the previous model. At the end of our week long test the trip computer returned a reading of 7.7L/100km, which is pretty remarkable for a car of this size and weight.

Cruising at legal freeway speed the Q7’s fuel use hovered around 5.0L/100km.

Beyond this, the options list is extensive and expensive. The ambient lighting package in our test car will set you back $1,380, while the adaptive air suspension costs $4,950. The Matrix LED headlights with dynamic rear indicators option is another $5,500!

Improved packaging, better handling and more efficient, there’s now a lot more to like about the second generation Audi Q7. And that interior, wow. It’s got its flaws still – the design is an acquired taste and the brakes need more tuning – but it’s definitely a compelling option in the fast growing flagship SUV market.