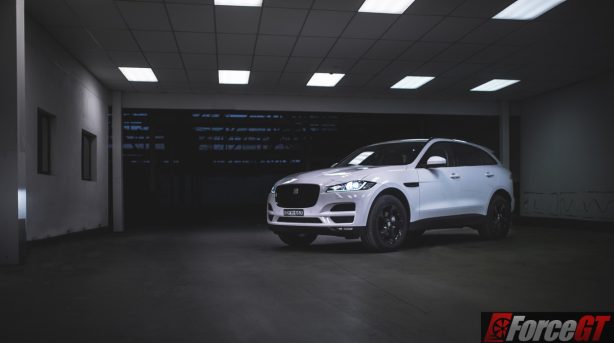 If you are late to a party, you better make a grand entrance and that’s exactly what Jaguar has done with the new F-Pace. Inspired by the company’s gorgeous F-Type Coupe, the F-Pace is anything but bland, turning heads wherever it goes.

The F-Pace is also a sign that no manufacturers can do without an SUV in their lineup, not even Jaguar Land Rover which already has an established arm that cater exclusively to the premium SUV segment.

But unlike Land Rover and Range Rovers, the F-Pace is based on a passenger car platform, which means it has more car-like dynamics but infused with a degree of off-road ability.

The range is extensive, with no less than twelve variants on offer in Australia and available in both petrol and diesel, all with all-wheel drive.

On test is the entry-level F-Pace Prestige 20d – expected to be the most popular model in the range – which starts from $74,340. But as with most press vehicles, our test car is equipped with an additional $18,870 worth of options, taking the price up to $$93,210, before on-road costs. 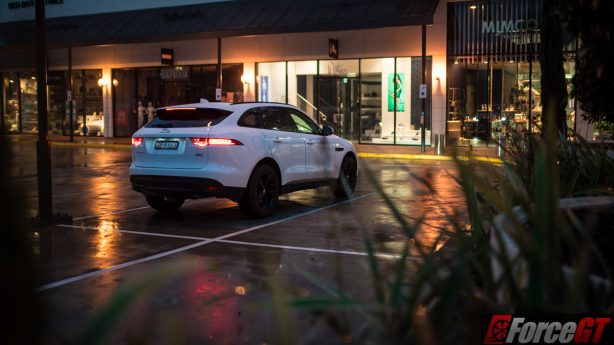 Jaguar Land Rover’s Design Boss, Ian Callum said the F-Pace is “the most balanced, most attractive vehicle in its class” and we tend to agree.

It’s hard to find a bad angle on the F-Pace and the F-Type’s design DNA is obvious, from the muscular haunches to the elegant lines and graphics of the LED taillights, the crossover’s dramatic design is distinctively Jaguar and oh-so F-Type.

The bold, upright grille not only gives the car its assertive look, but also contributes to the F-Pace’s aerodynamic efficiency of only 0.34, helping to reduce fuel and improve refinement, the latter of which is excellent. 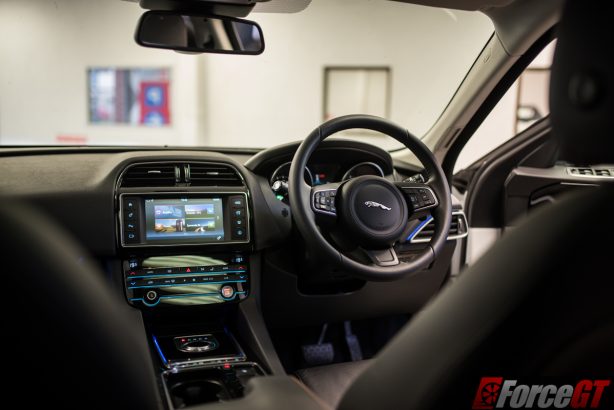 Inside, the driving position is uncannily car-like. Yes, you sit higher than a conventional wagon, but getting in and out of the car doesn’t require long limps or a side step. The driver sits with arms and legs outstretched, surrounded by a high transmission tunnel console and relatively shallow glasshouse.

While the F-Pace’s exterior is full of design flair, its interior is a little more conventional (although not unappealing) and would be familiar to anyone who’s been in a XE or XF.

The driver is greeted by a pair of analogue instruments and most of the car’s features are controlled via an 8-inch InControl touchscreen system. Ergonomics are generally good, although the power window switches are not where you expect them to be – high on the window edge. In its place are the memory seats buttons which you will tend to push when trying to lower the windows. 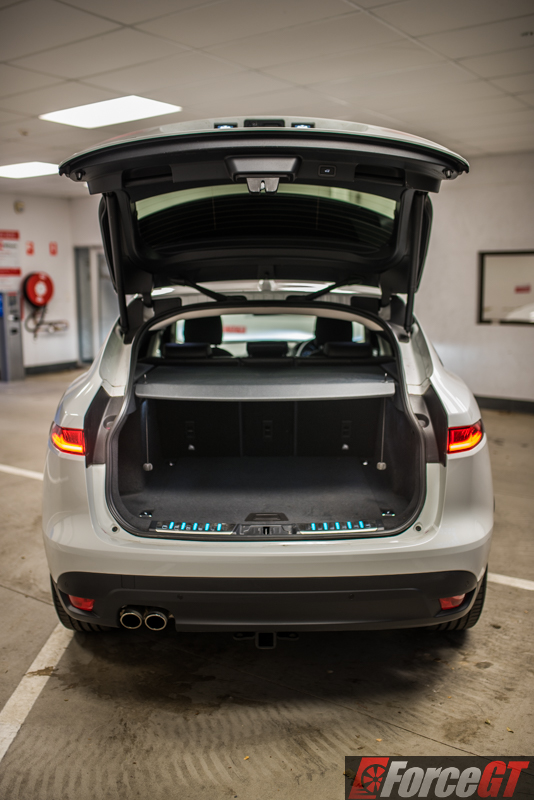 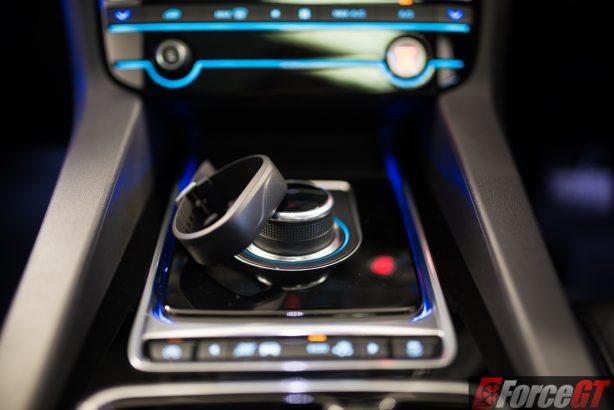 Families will delight in the usefully big door bins, appropriately sized twin cupholders, sizeable centre storage and upright storage cubbies on the sides of the centre console design for smartphones.

Further aback, the F-Pace’s SUV practicality gets clearer. The rear seats can comfortably accommodate three average-sized adults with good head and legroom, while the backrests are split 40:20:40 to improve upon the 508 litres boot space, giving a generous 1,740 litres. There’s also a reversible boot floor that is carpeted on one side and rubberised on the other – making it ideal for sports equipment or pets.

Active types may also want the tick the $640 Activity Key option. It is a Fitbit-like waterproof and shockproof wristband that allows you lock and unlock the vehicle just by touching the ‘J’ of the Jaguar lettering on the tailgate. 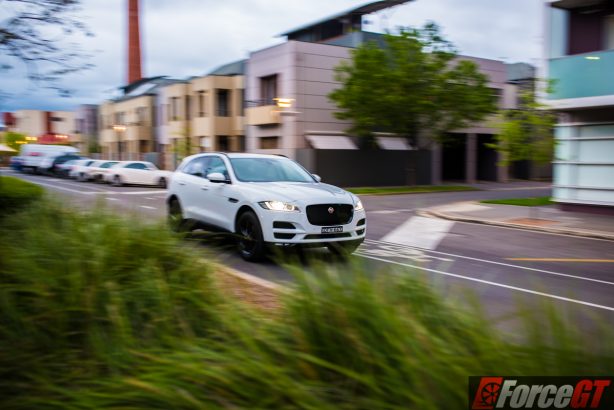 While JLR produces plenty of SUVs, Jaguar has refrained from borrowing Land Rover’s heavy-duty platforms, but instead underpinned the F-Pace with the same architecture as the new XE and XF in its quest for dynamism.

The result is not only remarkably car-like handling but because of its aluminium intensive construction, the F-Pace is relatively light for its dimensions, giving it impressive agility.

Sporting double wishbone front and an integral link rear suspension with standard dampers and optional 19-inch wheels, our test car handles like a sports wagon rather than a large SUV, with tonnes of grip from the 255 section tyres.

Its steering is precise, well weighted and communicative (and appears to get better in Sport mode, too), allowing you to hustle the F-Pace into corners with confidence, and at higher speeds than you would in a rival. Despite minor body roll, body control is excellent with good weight distribution and composure. And thanks to its rear-biased on demand all-wheel drive system, the F-Pace is relatively tail happy, too, if you are aggressive on corner exit. 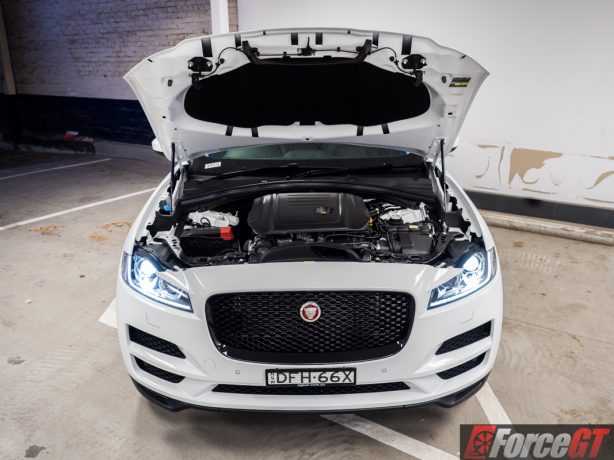 Its throttle response is generally crisp although a little nonchalant at lower rpms. However, turning the gear canister to ‘S’ sharpens it up nicely.

Of course, it isn’t without compromise. The F-Pace’s ride is firmer than one might expect and could be a little uncomfortable for Rover the dog. We also find the brakes don’t grip hard enough when driven hard. 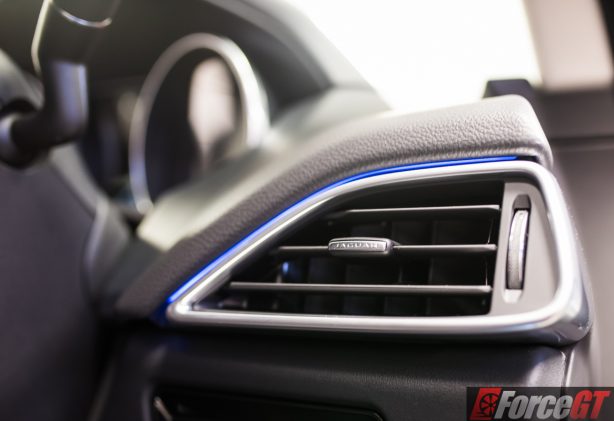 Jaguar is still working hard to shake off its unenviable reputation of being a little unreliable compared to its Japanese and German rivals, but we are pleased to report the F-Pace feels solidly built.

While fit and finish and material quality are generally good, our test car did have minor rattle from behind the dash and around the driver’s side B-pillar.

Thankfully, the F-Pace comes with a jolly good Meridian Sound System that easily drowns out those annoying noise. 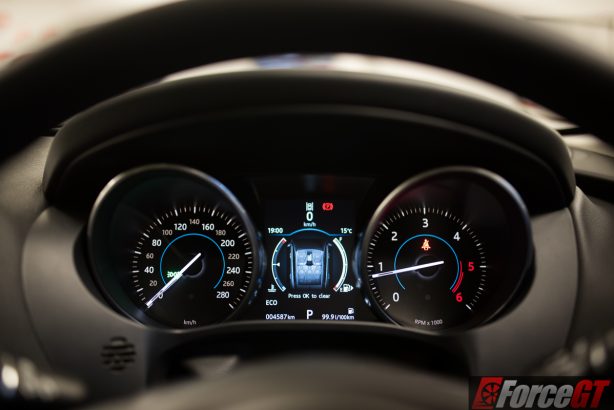 Jaguar says the F-Pace 20d will return a combined average of 5.7L/100km of diesel. In the real world however, we managed 8.7L/100km with roughly 70 per cent city and 30 per cent freeway driving.

As a comparison, the heavier and more powerful Audi Q7 160 TDI we tested recently returned 7.4L/100km. 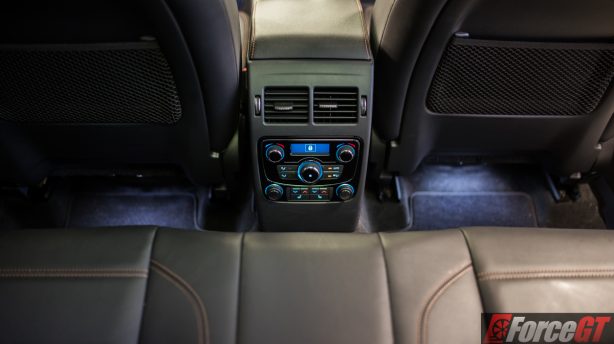 Like most new cars these days, the Jaguar F-Pace is loaded with standard equipment, although the options list is equally comprehensive.

It’s better late than never and the Jaguar F-Pace has certainly been worth the wait.

Its distinctively sporty, car-like flavour shows the F-Pace is a Jaguar first and foremost and an SUV second.