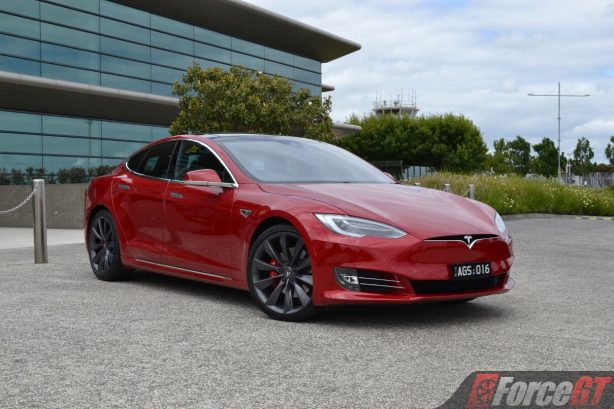 When a car maker calls its driving mode “Ludicrous” it must be dead serious about it. Found in the Tesla Model S P90D, Ludicrous mode transforms the electric car into the world’s quickest accelerating four-door sedan. We are talking zero to 100km/h in 3.0 seconds flat! And no, it’s not a wishful claim as it did stop our clocks in 3.2 seconds under non ideal conditions.

This level of performance was out of this world only just a few years ago. And now this family saloon demolishes the century sprint quicker than the Audi R8, Honda NSX and Lamborghini Huracan.

Next year there will be an even quicker Model S – the P100D – which will give elite hypercars like the Porsche 918 Spyder, LaFerrari and McLaren P1 a very hard time on the drag strip. But for now the P90D remains the range’s flagship. 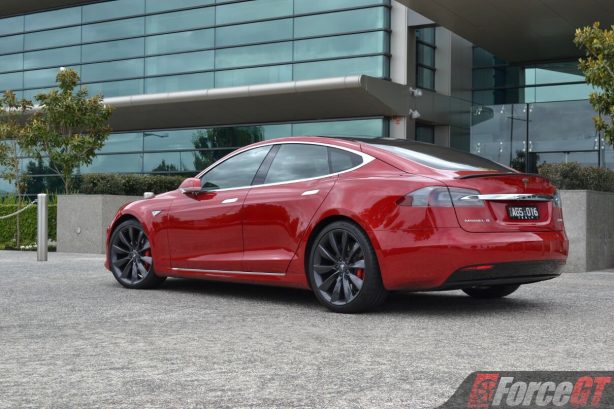 Facelifted for 2017 (now we are on topic but it’s hard not to talk about the stupendous acceleration in a Tesla review), the Model S is even sleeker than before thanks to a grille-less front fascia with revised bumper and restyled LED adaptive headlights. The revised rear bumper is less chunky around the sides and the diffuser now sports a gloss black finish. The new car also loses the black under protector in favour of colour-coded panels for a sportier and lower look.

Inside, the 2017 Tesla Model S gains several new options including heating and ventilation for the front seats and a new medical-grade air filtration system capable of removing at least 99.97% of particulate exhaust pollution and all allergens, bacteria and other contaminants from cabin air. A new segmented centre storage compartment takes the place of the previously barren centre console and there are two new wood trim options including Dark Ash and Figured Ash. Elsewhere, the gigantic 17-inch centre touchscreen gets some minor tweaks for a less cluttered interface. 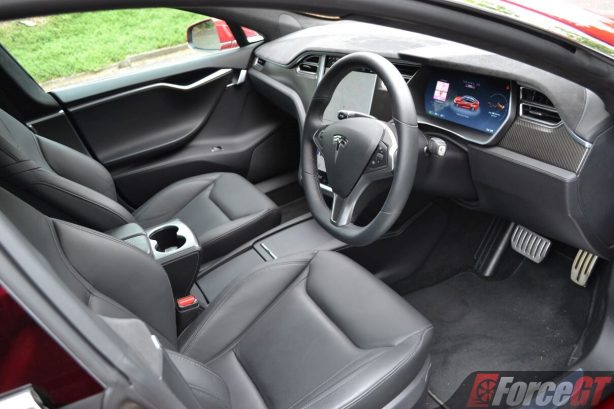 Most important, the Autopilot semi-autonomous driving technology is now even smarter. With the Autopilot feature under heavy scrutiny lately, Tesla has rolled out a new version designed to improve collision prevention.

For those new to Autopilot, it is one of the most advanced semi-autonomous driving systems on the planet. Autopilot allows the car to steer, switch lanes, manage speed and brake all on its own. It uses eight surround cameras providing 360 degree visibility around the car at up to 250 metres of range. Twelve ultrasonic sensors complement this vision, allowing for detection of both hard and soft objects. A forward-facing radar provides additional data about the world on a redundant wavelength, capable of seeing through heavy rain, fog, dust and even the car ahead of the one in front.

On a side note, every Tesla coming out of the factory now has the necessary hardware for full self-driving capability. Once Tesla has cleared all the hurdles – legal issues and insurance matters – we will be seeing the world’s first self-driving production car. And you’d better believe it’s not too far away. 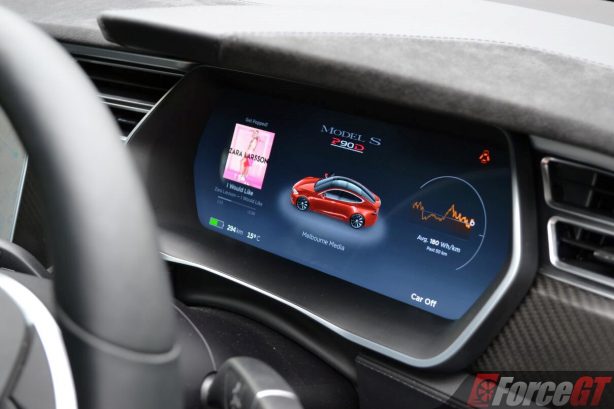 The updated Autopilot will, for the first time, use the car’s forward-facing radar as a primary control sensor without requiring the camera to confirm visual image recognition. Previously, the radar was only used as a supplementary sensor to the primary forward-facing camera and image processing system. With improved processing power, the system is now able to ‘stitch’ together a better picture of the world around it.

We noticed the operation is slightly smoother than before with quicker response to sudden braking and less ‘hesitant’ in performing auto lane change. On the freeway, the system is simply flawless. Set the desired cruise speed and distance from the car in front and the Tesla will take over driving, keeping it within the lane, maintaining safe distance from any vehicle ahead and braking when necessary. 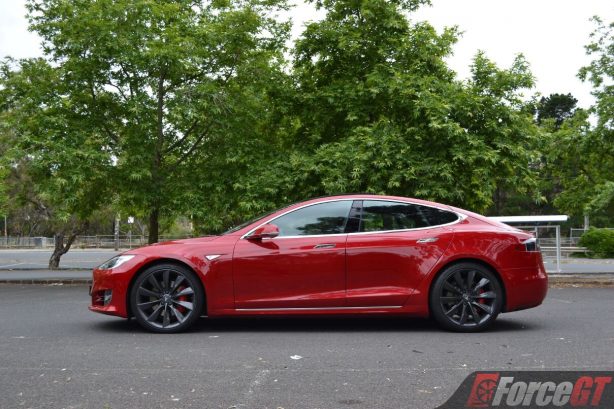 The new software also introduces ‘fleet learning’, where Tesla’s vehicle fleet will take no action in confusing situation – such as approaching an overhead highway road sign positioned on a rise in the road or a bridge where the road dips underneath – except to note the position of road signs, bridges and other stationary objects, mapping the world according to radar.

The car computer will then silently compare when it would have braked to the driver action and upload that to the Tesla database. If several cars drive safely past a given radar object, whether Autopilot is turned on or off, then that object is added to the geocoded whitelist.

Fleet learning has also improved the car’s curve speed adaptation when Autopilot is used, where it will slow to suitable speed based on the fleet-learned roadway curvature.

In a bit to prevent the abuse of Autopilot warnings are now more prominent – including flashing white border on instrument panel – if you don’t have your hands on the steering wheel. The car will also not allow re-engagement of Autopilot until parked if repeated warnings are ignored.

Can we have the full self-driving version now please, Tesla? 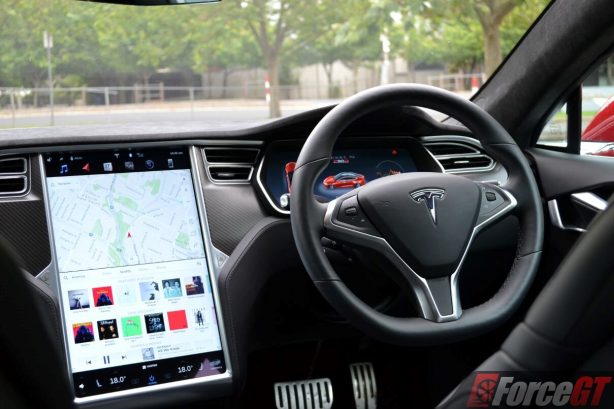 The previous model’s full electric drivetrain is carried over unchanged to 2017. In our P90D there are dual motors – a 375kW motor driving the rear axle and a smaller 193kW unit propelling the front axle. In essence, this makes the Model S all-wheel-drive. Combined the two motors serve up a colossal 967Nm of torque. Three-second dash to 100km/h aside, here’s something else to tell your mates who own Ferraris and Porsches: the P90D does the quarter mile in 10.9 seconds!

Advancement in battery technology means the new Model S gains a few kilometres of range from a full charge. In the case of the P90D, you get 515km, a gain of 10km. 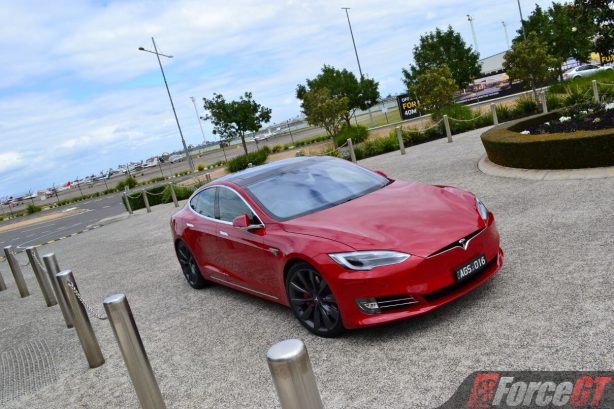 Tipping the scale at 2,200kg the Model S is still a heavy beast. But smart designs result in a 51:49 front:rear weight distribution, which aids big time in handling. In corners, the Tesla holds the line well with little body roll and superb grip.

The steering is precise but like the pedals, feels numb and disconnected. Braking or decelerating takes a bit of getting used to. Lift off the throttle and the car slows down rather than freewheels as kinetic energy from the brakes is harvested to charge the batteries. The brakes bite hard under heavy braking but tend to be a bit inconsistent in normal driving. 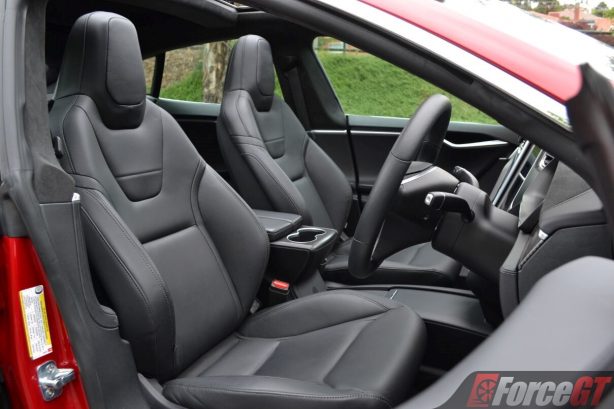 The Model S is a fantastic cruiser. The height adjustable air suspension soaks up bumps really well and because there are no firing cylinders, no intake or exhaust gases, not even gears, refinement is at another level. At any speed the experience is serene and tranquil. With two boots (front and back) and a spacious cabin the Model S also makes a great family car.

Before the P100D hits Australian shores sometime next year, the P90D is the most expensive in the line-up. Base price starts at $171,700 plus on roads. With all the essential options ticked, including the $15,000 Ludicrous Speed Upgrade, our P90D costs a whopping $281,940 on the road.

The updated 2017 Tesla Model S improves upon its already incredible performance, space-age technology, unrivalled practicality and sleek design. The combination of explosive performance and zero reliance on fuel further reinforces its unique proposition within the segment.

There is a problem however, and it’s not with the car but the infrastructure. The lack of charging station continues to restrict its freedom of travel and for some this may be a deal breaker.