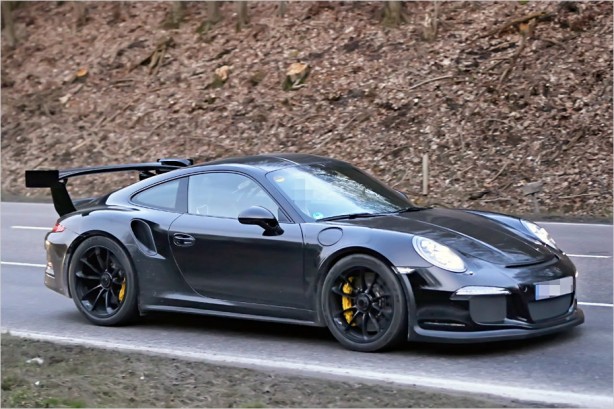 The highly anticipated Porsche 911 GT3 RS has been spied undergoing testing at the Nürburgring circuit. After its numerous appearance testing on public roads, the GT3 RS finally gets some track action.

Originally planned for a late 2014 release, the hardcore version of the 911 GT3 is not expected to arrive until 2015. This was due to the company temporarily halting sales of the GT3 earlier this year after at least two examples caught fire in Europe due to engine failure.

Apart from the significantly larger rear wing and air intakes behind the doors, the GT3 RS also gets a larger front lip spoiler, modified rear fender and widened track with wider wheels and tyres.

Like the Porsche GT3 it is based on, the track-focused RS will almost certainly come exclusively with a PDK dual-clutch transmission.

In line with previous RS, the new one will be put on a strict diet to shed all unnecessary weight, including a plastic rear windscreen and basic interior, making it even lighter than the GT3’s 1,429 kg curb weight.

Previous Hennessey details Venom F5 – set to be the fastest in the world
Next Next-generation Bugatti Veyron confirmed. Due in 2016