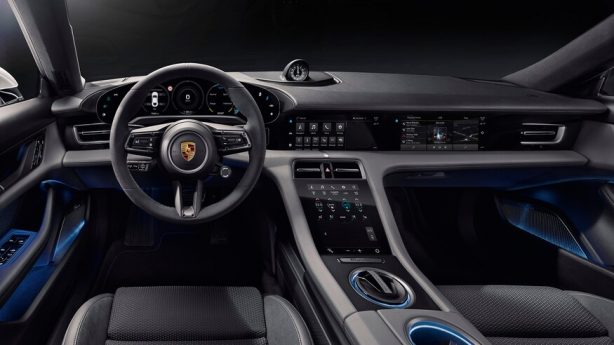 Porsche is entering a new era with the new Taycan, the brand’s first all-electric sports sedan. While we don’t yet know exactly what kind of performance is on offer with the Taycan, Porsche has unveiled the EV’s interior and we must say it’s pretty space-age.

Following Tesla’s approach, Porsche has gone all digital with the new Taycan cabin, fitting it with not two or three, but four digital displays that take up the entire width of the dashboard.

Porsche says the original 911’s cleanly styled dashboard from 1963 was the inspiration. The stated goal was to bring it into the present day. The raked centre console houses a vertically orientated 8.4-inch haptic touchscreen for audio, navigation and climate controls. Above it is a 10.9-inch infotainment screen, accompanied by a second identical screen for the passenger side, though the latter is optional. Lastly, an ultra-cool 16.8-inch curved screen serves as the instrument cluster.

The digital instrumentation can be set to one of four display modes:

There are also small, touch-control fields at the edges of the screen for operating the light and chassis functions. The instrument cluster is therefore wider than the steering wheel and reminiscent of the iconic original 911. 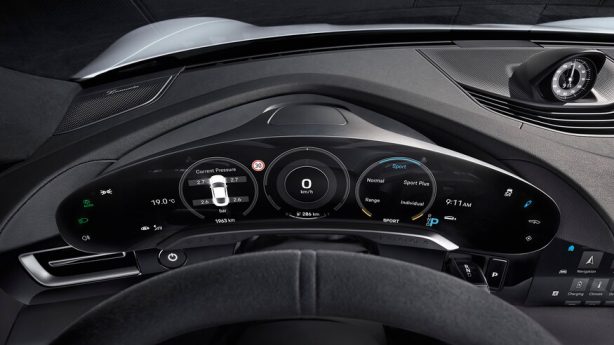 Every detail in the cabin has been reduced to the essentials. Like the Porsche 918, the Taycan has a compact direction selector switch in the instrument panel instead of the classic selector lever. This gives the centre console a cleaner look and creates storage space.

A reduction to the essentials and a clear approach are also evident for the air vents. Traditional, mechanically-operated louvres are gone, as airflows are now controlled both digitally and automatically. Called the “Virtual Airflow Control”, occupants can switch between “Focused” for fast, directional cooling and “Diffused” for draught-free air conditioning. If the optional four-zone automatic climate control is fitted, an additional 5.9-inch touch control panel with haptic feedback allows the system to be operated from the rear seats. 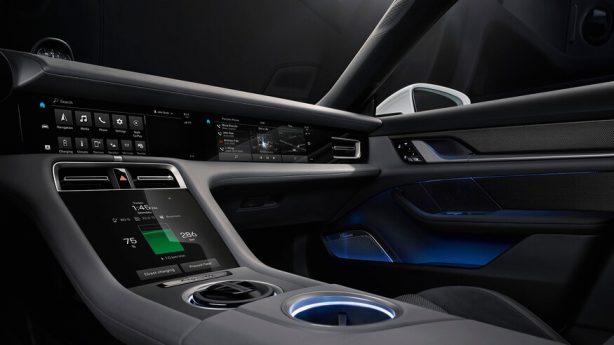 The Taycan is available with a wide range of interior and exterior configurations, in both traditional and modern styles. Interior colours Black-Lime Beige, Blackberry, Atacama Beige and Meranti Brown are exclusively available for the Taycan. The optional interior accent package also gives customers a choice of special contrasting colour schemes in black matt, dark silver or neodyme, an elegant champagne tone. The doors and centre consoles can be wood trim, matt carbon, embossed aluminium or fabric.

Due to be fully unveiled at the Frankfurt Motor Show next month, the Porsche Taycan is set to take on the Tesla Model S P100D in its quest to be the fastest electric sedan in the world.