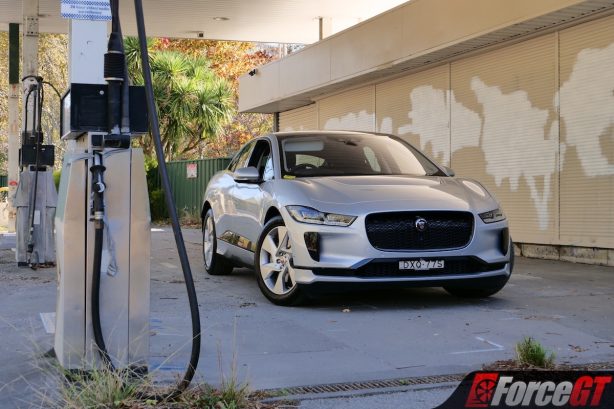 To most people, the Jaguar brand is one that is most commonly associated with somewhat old-world quintessential Britishness. Think petrol-guzzling engines and lots of leather and wood grain all wrapped up in a classic three-box sedan package.

But the Jaguar of today couldn’t be further from where it was in the past. The big XJ – once a hallmark of the brand – has been pulled from production due to waning sales, the XE is now only available with a four-cylinder turbo engine, and quite possibly the best version of the XF is a diesel-powered wagon.

But even still, if you were to have asked someone a few months ago if they thought Jaguar’s latest offering would be a pure-electric SUV, they’d probably have told you that you’d gone mad. 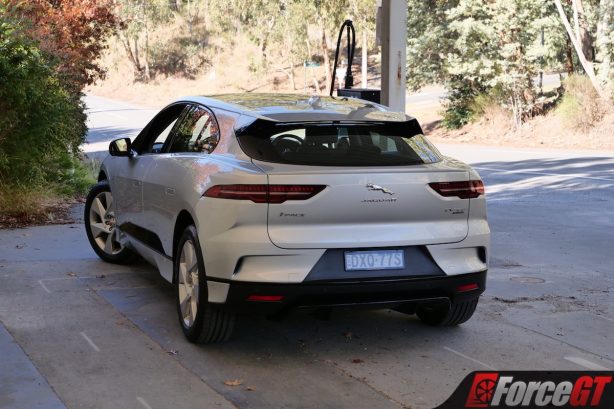 But with this – the all-new I-Pace, tested here in mid-spec EV400 SE guise – Jaguar has only gone and done just that. The brand’s first all-electric vehicle, which follows on from the lead of its sister company Land Rover’s hybridised models, it’s an important one for Jaguar to get right – not only because it needs to set the precedent for the company’s future models and show that the Jaguar brand can survive in an electrified world, but also because it needs to put it to the upstarts at Tesla that the established car makers can put forward a product that can give them a run for their money.

That’s why it’s not only because of Jaguar’s past that the I-Pace comes as a bit of a surprise, but because Jaguar Land Rover isn’t exactly the most well-heeled company out there, so developing and building an all-new, all-electric model seems like it would be a bit tricky for them to pull off.

But, you see, Jaguar isn’t actually the one making this thing – construction of the I-Pace has actually been outsourced to Austrian company Magna Steyr. If that name sounds familiar, it’s because they’ve been building the Mercedes G-Wagen for years, they’re the one’s building the new Toyota Supra, and they already produce the E-Pace for Jaguar, too. Clearly then, they know how to bolt a car together when someone needs them to. 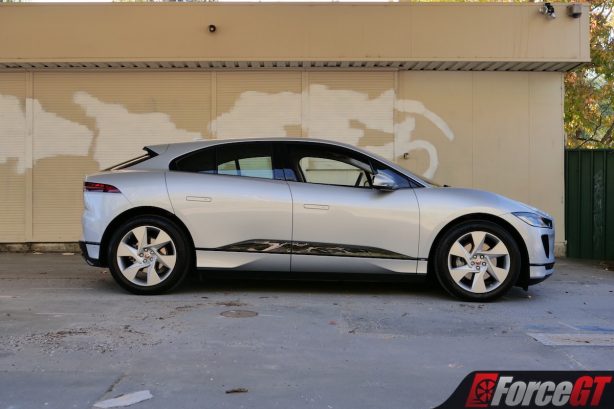 And that, of course, brings us to the car itself. Stylistically, it’s as much of a departure from the Jaguar norm as it is mechanically, but that isn’t necessarily a bad thing.

Certainly, it’s an unconventional design – somewhat of a mish-mash between an SUV and a four-door coupe, with a sloping roofline but a starkly squared-off rear end – but I for one think it actually looks rather good. Sometimes, being different can be a bad thing, but only when it’s too different, and with a number of traditional Jaguar styling elements still there such as that signature front end, there’s no mistaking it for being a Jag despite its uniqueness.

There are some very clever bits of design when it comes to its aerodynamics as well – always something important when it comes to EVs so as to extract as much range as possible. The duct running from the top of the grille and out of the bonnet, the rear roof spoiler, and the huge rear diffuser are all fully functional, and help the I-Pace achieve a 0.29 drag coefficient. 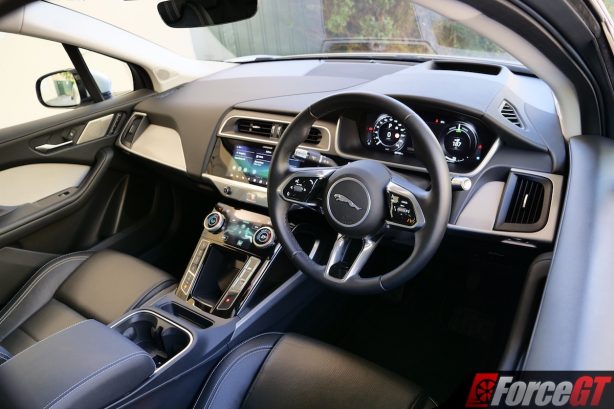 On the inside, all will be largely familiar to those who are well-acquainted with JLR’s other models. The InControl Touch Pro infotainment system – which now supports Apple CarPlay and Andoid Auto – is the same high-quality unit as you’d have in any other Jag, and the fully-digital instrument panel is much the same as well, other than it not having a tachometer.

However, the 5.5-inch colour touchscreen and digital temperature dials that operate the car’s climate control system – which are, admittedly, heavily inspired by what you’d get in a Range Rover – are a new and welcome addition, as is a new energy conserving feature that means it only sends air out of particular vents if it detects someone sitting in that particular seat.

Comfort is good up-front with oodles of adjustability for the seat and steering wheel – the latter of which sports a rather nice and uniform new design, and will make its way into the rest of Jaguar’s future models – and nicely padded armrests on either side. The seats are the standard Jaguar fare, meaning they’re well padded, supportive, and clad in high-quality leather, although it is worth noting for the shorter drivers out there that they are rather deep, although for myself at 6’2″ they feel to be just right proportionally. 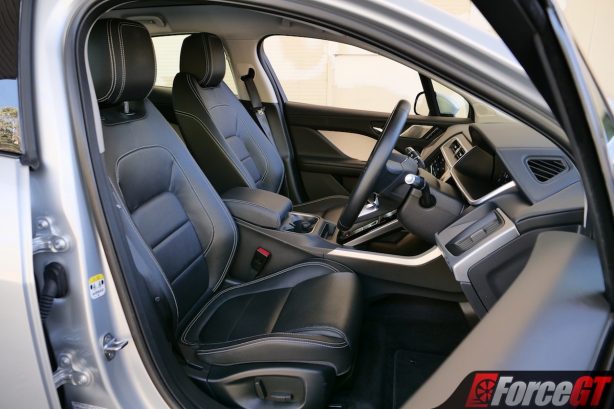 In the back, space is fairly good given the sloping roofline, and the seating is fairly comfortable, although the short and cheap-feeling centre armrest borrowed from the E-Pace isn’t the greatest. The optional panoramic sunroof does let in a lot of light which helps open up the cabin space, and despite not having a cover, the solar glass is effective at reducing the harshness of the sun on particularly hot days.

The boot is a good size as well, measuring in at a standard 656 litres, but do note, however, that with the optional air suspension, that is reduced to 638 litres. You do at least get some space in the front though, but with it not being quite as much as what’s on offer in a Tesla due to that big air duct, it’s best used for simply keeping the charging cables in.

And on the topic of charging, during our time with the car, we only had the opportunity to charge it using a regular domestic power point, and we found that to get a full charge from it being nearly empty would take almost two days. Of course, using public fast charge stations or a specially-fitted home charging station, that time would come down significantly, but it is something to keep in mind. 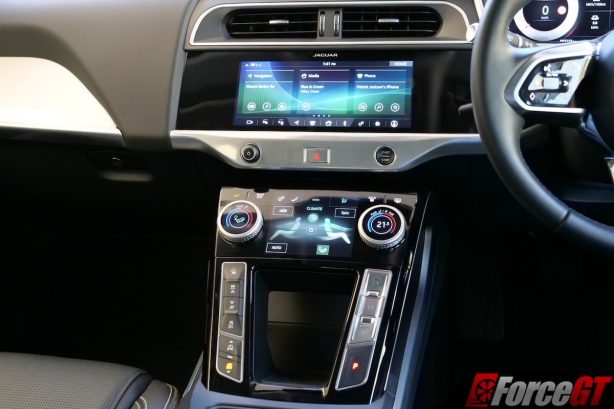 Also on that topic, we should note that we didn’t quite see the promised 470km range out of the I-Pace, instead seeing more like 380km to a charge. Admittedly, some of that was in part due to the, ahem, spirited way we were driving it, but again, it’s something to consider.

But while there may be some potential compromises there, the one area you’ll find not compromises having been made is in the way that it drives, which is particularly superb.

Jaguar has been making a big deal about handling now since first trying to entice younger buyers to the brand a few years ago, and while there’s barely a dud in its lineup, the I-Pace truly stands out as one of the best driving cars Jaguar sells. 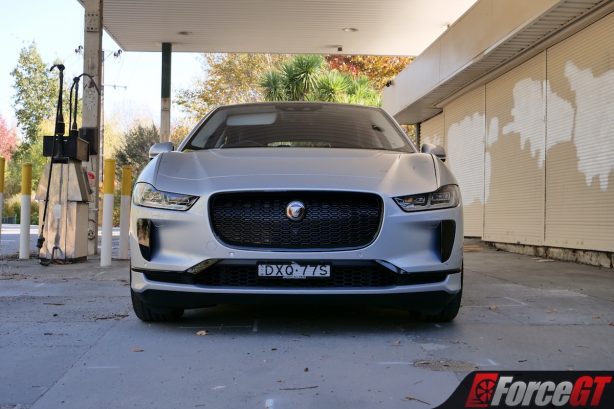 The steering feel is direct and progressive, and about as good as electric power steering racks can get, and the precision of the tiller is complimented by the suspension’s manners through the bends. We wouldn’t go so far as to call it truly agile, but it’s about as good as a car of this size could ever be.

Admittedly, our tester was optioned up with both the $2,002 air suspension system and the $2,405 Adaptive Dynamics programming, but both feel to be well worth it as the I-Pace feels incredibly stable and balanced through the bends, exercising control most SUVs could only dream of.

Not only does it remain flat and planted, but the comfort factor of the air suspension aids in mitigating the effects often caused by the mid-corner bumps found on many of the great driving roads you’ll find in this country. Certainly, you’ll hear it when it takes a sharp hit from below, but very rarely will you feel it. 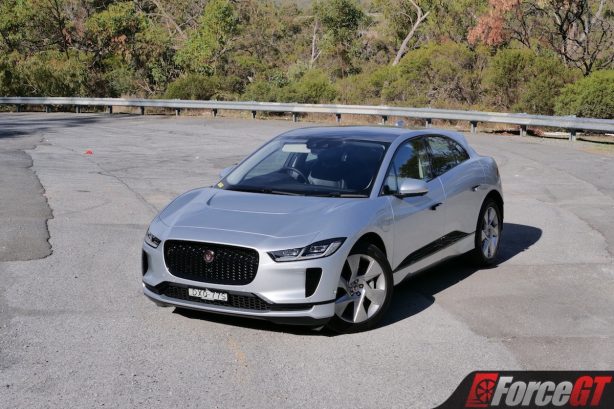 Worth noting as well is that the poise of the I-Pace is only enhanced by its low centre of gravity, too, thanks to the majority of the car’s weight – the hefty lithium-ion battery packs – being located under the floor of the car.

And that brings me on very nicely to the other great part of how it drives, and that’s the power. With a combined 294kW and 696Nm from its two permanent magnet synchronous electric motors, calling it quick is a bit of an understatement.

For a vehicle weighing in at a portly 2,133kg it comes as a bit of a surprise that it can dispatch itself from 0-100km/h in just 4.8 seconds. Sure, it isn’t quite the supercar spanker that Tesla’s Performance models are, but it’s mighty fast. And, perhaps more importantly, it gives Tesla’s more comparably priced mid-grade models a belting. 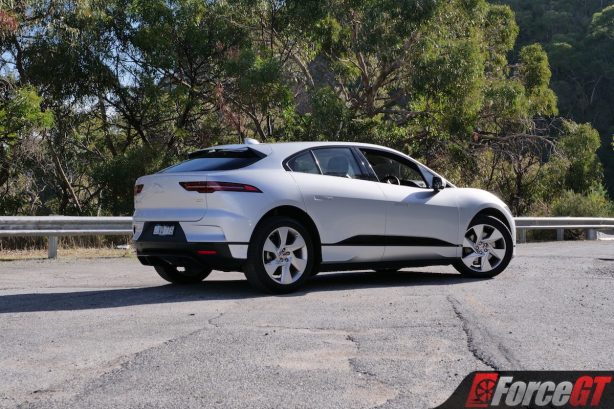 While all electric cars feel rather brisk – or they at least feel torquey when it comes to less powerful cars like the Hyundai Ioniq – the Jag being all-wheel drive due to having electric motors both up front and in the rear means it can really put the power down with neck-snapping force.

There’s really not much to complain about at all when it comes to the way the I-Pace drives. One minor annoyance is the gimmicky fake engine sound pumped through the speakers, which is just far too naff, but if we had to single out anything as a negative about the actual operation of the car, it would be the brake pedal feel.

As it utilises a brake-by-wire system – meaning no physical connection between the pedal and the brakes themselves – as stepping on the pedal will initially, and for the most part, engage only the regenerative braking system, with it only using the real anchors when it absolutely must. 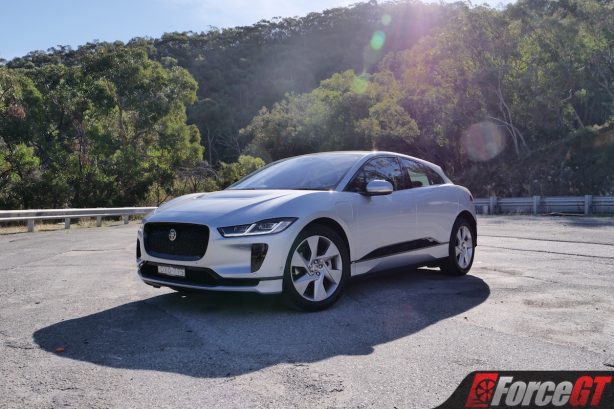 But even then, there’s a solution – simply put it into its high-level regenerative braking mode and you can effectively one-pedal drive without the need to ever really use the brake pedal until you’re at single-digit speeds. It would, however, be handy to have a few additional regen levels, and for it to be easier to change between them – think paddles like Hyundai uses, rather than navigating through a few levels of the infotainment system.

Ultimately, that’s all there really is to hold against it. Yes, the performance offered up by Tesla’s top models may leave some people wishing for more oomph to compete, but for a first attempt at an electric car – and a radical departure all around from the Jaguar norm – the I-Pace leaves us very impressed.

Plus, given the fact that it swept up three awards at the 2019 World Car Awards for Car of the Year, Car Design of the Year, and Best Green Car, we clearly aren’t alone in being rather blown away by it.

The I-Pace is a car that has really left us impressed all around. It looks good, its interior is a nice place to be, it’s fantastic to drive, and it goes like the clappers. Spare a few odd details here or there that we may question, it’s an incredibly well-rounded package that leaves little to be desired.

But beyond just being a good car, it manages to put Tesla in its place by showing that yes, established car companies are capable of making electric cars that are just as good as theirs. It shows that the typically very traditional and old-world Jaguar name has a place in the future, too.

Previous 2020 Renault Zoe gains bigger motor and up to 390km range
Next Video: YouTuber turns her Tesla Model 3 into a custom ute