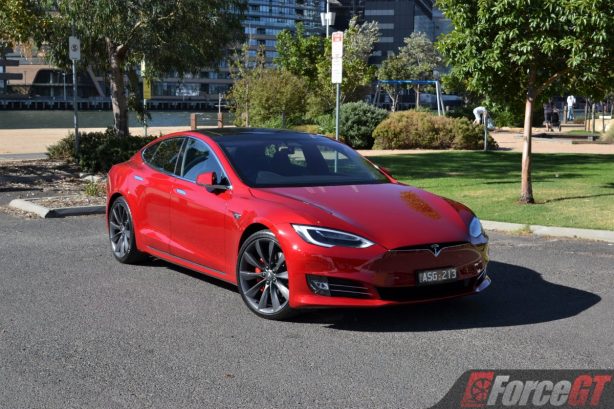 Less interestingly, the Model S is the flagship model of Tesla’s electric car line-up and the P100D tested here is the range-topping variant. More excitingly, the Model S P100D is the fastest accelerating saloon car in the world. It sprints from 0 to 100km/h in just 2.7 seconds. No, that is not a typo. This four-door, five-seat luxury family barge is quicker to crack three-digit speeds than a Ferrari 488 GTB or a Porsche 911 GT2 RS. And if you’re into traffic light grand prix, you will get to 60km/h in about 1.4 second as soon as the lights go green, embarrassing even the fastest and the most furious of boy racers. Wait, how about this: 80km/h to 120km/h rolling acceleration in just 1.2 seconds!

The secret behind its Ludicrous acceleration is this: instant torque and endless electrically induced traction. The P100D packs dual motors – a 375kW motor driving the rear axle and a smaller 193kW unit propelling the front axle. In essence, this makes the Model S all-wheel-drive. The power output may not seem like a lot but it’s got a colossal amount of torque – a combined total of 989Nm from the two motors. All of it available in full right from the get go, right when you slam on the pedal.

The way this thing gets up to speed is mind blowing, to say the least. Be prepared to have your head thrown back against the head rest the moment you open the electron gates. 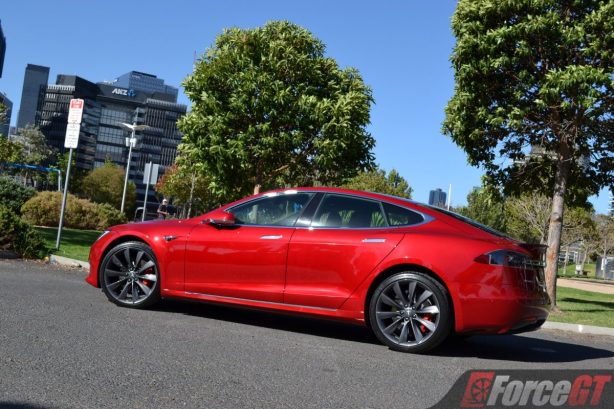 The P100D is the most expensive in the Model S line-up. Base price starts at $198,100 plus on-road costs. With all the options ticked, including the $6,900 Enhanced Autopilot semi-autonomous driving feature, our P100D costs a whopping $270,515 on the road.

The flagship offers a ‘guilt-free’ range of around 530km, depending on how you drive. Charging the car is as easy as charging your mobile phone. One end of the charge lead connects to the car and the other end plugs into any power socket in your home. A full charge through a domestic 10A outlet will take north of 8 hours. But take it to a Tesla Supercharger charge point and a full replenish will take just a little under an hour. 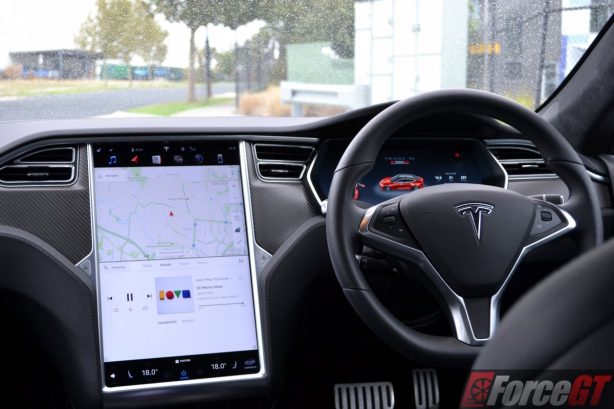 You can, of course, get a lesser variant. The entry level Model S 75D is, in fact, all you ever need in an electric car that gets you to and from work plus the occasional weekend trip out of the city. With a range of about 450km from a single charge, the 75D does the century sprint in 4.4 seconds – not as insane as the P100D but still astonishingly quick. And this model ‘only’ costs $124,502 plus on-roads.

To get the longest range out of a charge you will need to opt for the 100D, which delivers around 580km in range priced from $160,512 plus on-road costs.

Five adults would sit comfortably in the Tesla’s beautifully crafted seats, with both rows of occupants getting plenty of legroom. However, taller rear passengers will find headroom a premium due to the sloping roof line.

Without a transmission and driveshaft, the cabin’s centre compartment offers plenty of storage space for all the nitty-gritty as well as two large bottle holders and two cup holders. You will need them as there are no door pockets. 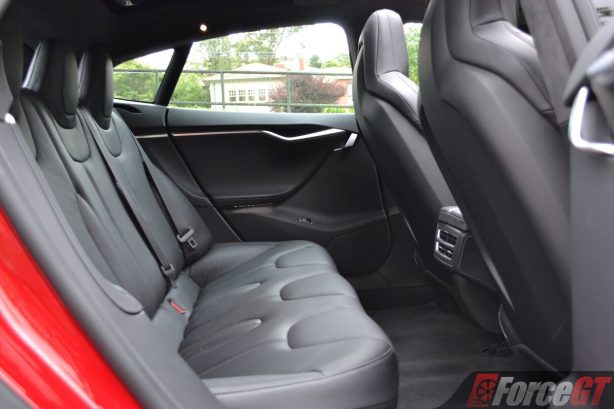 The rear hatch opens up to a conventional boot which is deep and flat, but pop the bonnet and you will find a second smaller cargo bay (there’s no engine, remember?), which can swallow up a couple of small suitcases. Combined, they offer an impressive 894 liters of storage space. Carrying long items such as a surf board is a breeze thanks to the 60/40 folding rear seats.

Those with young families will appreciate the rear seats’ three ISOFIX attachments for child seat installations which can accommodate three child seats simultaneously: two with ISOFIX and one with top tether and belt.

Tipping the scale at around 2,200kg (a third of which comes from the batteries alone) the P100D weighs about the same as a Jeep Grand Cherokee SUV. In other words, it’s heavy. But smart designs result in a 59:49 front:rear weight distribution, which aids big time in handling. In corners, the Tesla feels fairly neutral, exhibiting mild understeer only when you get really close to its limits. There is very little body roll thanks to its low center of gravity and the AWD grip is phenomenal.

The thick-rimmed steering wheel is great to hold and has a nice weight to it but, like the pedals, feels numb and disconnected. Like most electric cars, braking or decelerating take a bit of getting used to. Lift off the throttle and the car slows down rather than freewheels as kinetic energy from the brakes is harvested to charge the batteries (regenerative braking can be turned off and it will glide). Thankfully, the brakes bite hard, killing off speeds as quickly as the Tesla gains them. 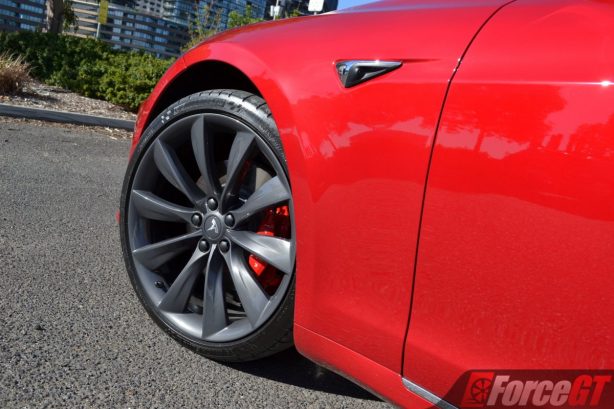 Perhaps, just as impressive as the stupendous acceleration is the overall refinement. Because there are no firing cylinders, no intake or exhaust gases, not even gears, the full electric powertrain delivers an eerily quiet and smooth ride. At any speed, all you hear is wind and road noise. And of very low level, too, because NVH (noise, vibration and harshness) in the Model S are remarkably well suppressed. Despite rolling on massive 21 inch wheels, our P100D rides exceptionally well across all but the roughest surfaces.

The P100D’s air suspension offers four selectable ride heights. At its highest setting the car will clear most bumps and steep driveways. Set to the lowest height for freeway driving, the car hunkers down for optimum aerodynamics, further extending its range.

Speaking of freeway driving, the Model S is equipped with Autopilot – one of the most advanced semi-autonomous driving systems on the planet. Autopilot allows the car to steer, switch lanes, manage speed and brake all on its own. While you still need to have your hands on the wheel at all times, the system does take away the stress and fatigue of long distance driving, allowing you to just sit back and relax through that 8 hour interstate trip.

On a side note, every Tesla coming out of the factory now has the necessary hardware for full self-driving capability. Once Tesla has cleared all the hurdles – legal issues and insurance matters – we will be seeing the world’s first self-driving production car. And you’d better believe it’s not too far away.

This or the Mercedes-Benz S-Class?

You get a bit more rear seat space in the Merc but you won’t be smoking Lamborghini’s and McLaren’s down a drag strip. But more to the point is the German saloon still chews on fossil fuel while the Californian sports sedan is pure electric. For the latter, you are buying a slice of the future. 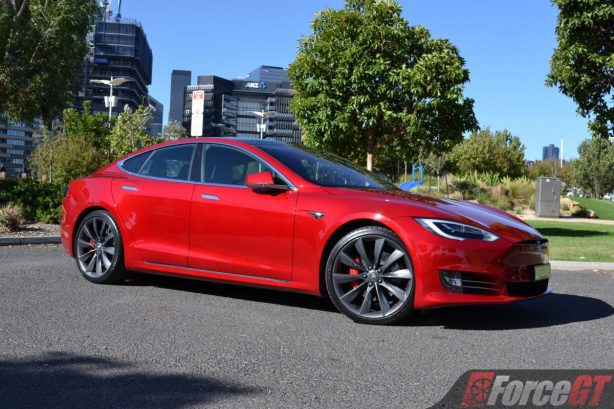 Tesla’s ever expanding charging network in Australia means charging your Model S is only going to be easier over time. There are charging stations already in city centre car parks, major shopping malls and tourist hot spots in the country. And if you live in the eastern states, Tesla claims the next Supercharger station is always within reach before you run out of juice. Yes, you can now drive from Adelaide to Melbourne, and on to Sydney and finish off in Brisbane in pure electric power.

But the best way to charge the Tesla is from a wall connector at home. And if you install a Tesla Powerwall battery storage integrated with rooftop solar panels, you will be running your Tesla on the best renewable energy known to us – the Sun.

More and more electric cars from mainstream manufacturers are making entry to the once niche segment. Despite that, the Tesla Model S remains the coolest, quickest and most high-tech electric car on sale today.

Tesla Model 3 – the fastest accelerating sedan in the world. But it may not …