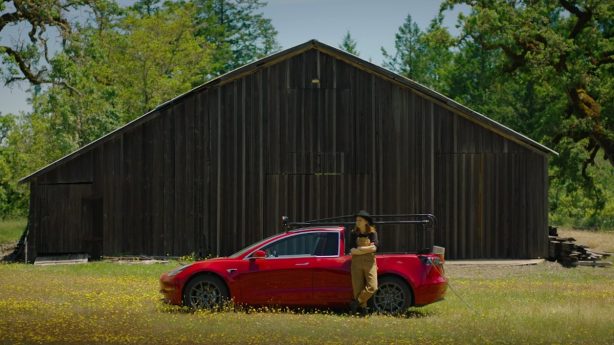 US-based Swedish YouTuber and inventor Simone Giertz has become the first person in the world to get their hands on an all-electric Tesla ute – by way of making one herself with the assistance of a group of other YouTube personalities.

Created due to her wanting a pickup truck to assist with acquiring materials for her many other creations she documents on YouTube that was all-electric due to environmental concerns, Giertz set about making her idea a reality by purchasing a brand-new Model 3 due to the mark-ups on used models.

Settling on the entry-level rear-wheel drive Standard Range variant as a base, Giertz notes that this decision was made not just due to the desire to keep the spend for the project down, but because the Model 3 has a steel unibody that would be easier to work with than the aluminium construction of the larger Model S and X. 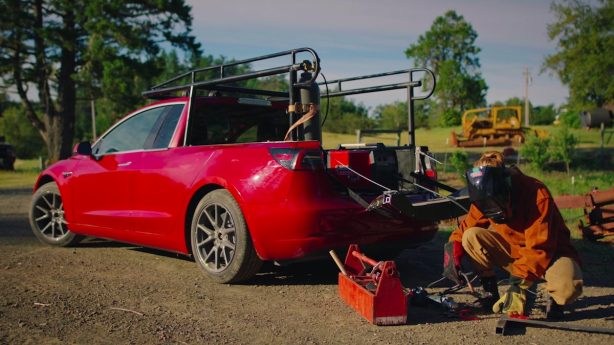 The car was comprehensively dismantled both inside and from the B-pillar back in a rented workshop, before the irreversible cuts were made to the Model 3’s behind, instantly revealing just what the finished product would end up looking like.

After fabricating some structural reinforcement behind the cabin and under the tray area, the rear window assembly was adapted from a GMC Canyon while the tray base was taken from a wrecked Ford F-150. Additionally, a full-length roof rack was fabricated for transporting things such as large sheets of plywood.

Although the basics have been ticked off for now, Giertz does point out that a number of issues still need to be taken care of – such as waterproofing the cabin, piecing the interior back together, installing a tray liner, ironing out some of the bodywork, and fully respraying it – but the custom ute is fully driveable as is. 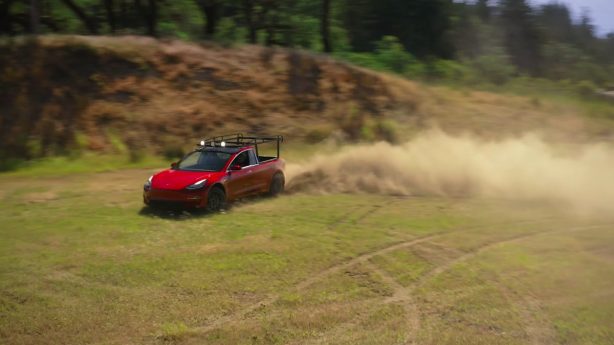 What has been completed on it so far was done over the course of four weeks, which included time off from the build due to Giertz travelling to multiple countries for other projects, and the finished product – dubbed the Truckla by Giertz – was treated to its own fake commercial film shoot to celebrate the achievements made thus far.

The deliberately tongue-in-cheek commercial, which includes typical pickup truck commercial scenes such as Giertz cutting wood on the tailgate and performing powerslides in a field, is wrapped up by her throwing the charging cable at the makeshift ute like a lasso, before it being proclaimed that the Truckla is “available nowhere”.

You can check out the very slick fake commercial in the video embedded at the bottom, while the full build process is documented in the main 31-minute video below – and do be warned, it does contain the odd four-letter word.