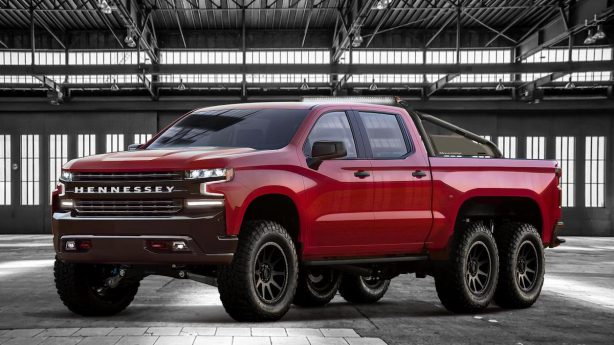 If you’ve ever felt that the massive Chevrolet Silverado was just a bit too small and a bit too subtle, we come bearing good news, as Texas-based tuners Hennessey Performance have provided the solution with this – the mammoth Goliath 6×6.

Starting out with a 2019 Chevy Silverado with the Trail Boss Z71 pack as the base, the masters of subtlety at Hennessey then stretch the frame and tray of the Silverado to accomodate an additional third axle at the very rear, which provides the Goliath with six-wheel drive.

There’s also an eight-inch lift kit underneath to make it a real go-everywhere high-rider, along with new 20-inch HPE wheels clad in 37-inch BFGoodrich mud tyres. New bumpers, LED lights, and a custom roll bar all go to enhance its looks even further.

To those familiar with Hennessey’s other works, it will come as no surprise that they’ve fettled with the engine, too. Working with the standard 6.2-litre V8, a 2.9-litre supercharger is added to force-feed 7psi of boost through the engine, which cranks power up to 525kW, while peak torque sits at 915Nm.

Despite the additional weight, Hennessey claims the Goliath will complete the 0-100km/h sprint in the mid-four second range – pretty brisk for a truck of this size. 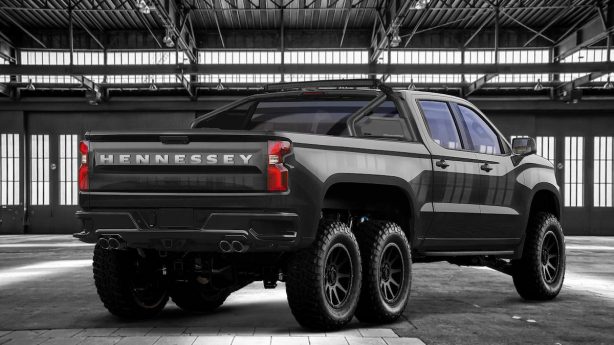 And, if that’s not enough power for you, there’s also the option of a 600kW stroker engine to ramp up the cost, along with other pricey options including Brembo brakes and customised interior features.

Production will be limited to just 24 units, all of which are expected to be snapped up pretty quickly. Hennessey claims it will ship the Goliath overseas if there are willing buyers outside the US, although to bring one to Australia – which would require a costly right-hand drive conversion, would no doubt be an even costlier undertaking.

The Goliath follows on from Hennessey’s VelociRaptor 6×6 of last year – a similarly extended, pumped-up, expensive, over-the-top, and insanely cool version of the F-150 Raptor.