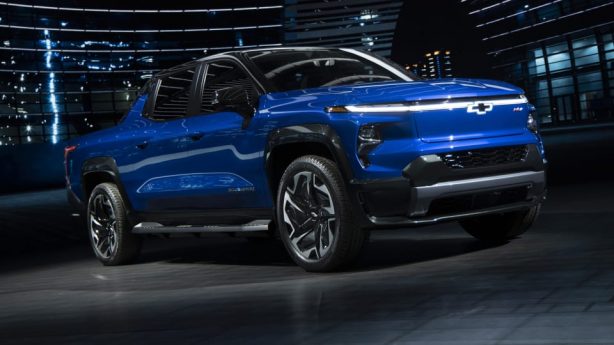 Chevrolet has unveiled a zero emission sibling to the popular Silverado pick-up trucks in the US overnight to take on the growing line-up of electric utes from Ford, Tesla and Rivian, amongst others.

Known simply as the Silverado EV, the new electric pick-up might share its name with the petrol-powered Chevrolet Silverado currently on sale in the US and Australia, but underneath, the EV actually rides on General Motors’ dedicated Ultium electric vehicle platform shared with the reborn GMC Hummer EV.

It comes hot in the heels of the Ford F-150 EV, which was unveiled a few months ago, and will be sold alongside the petrol Silverado when it hits the market in the US mid-2023. No words yet from General Motors Specialty Vehicles on whether it will import the pick-up to Australia. 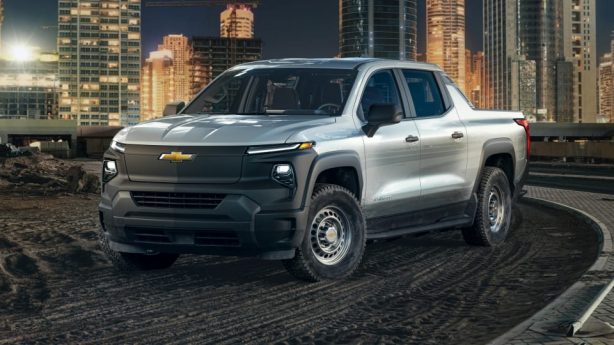 In the US, the Silverado EV will launch with two variants – a fleet-focused WT (or ‘Work Truck’), and a more expensive and better equipped RST – both offering a claimed range of close to 650km.

Behind the closed off grille of the entry-level WT is a pair of electric motors producing a combined 380kW and 834Nm. It draws power from a 24-module battery pack capable of a claimed 644km (400 miles) driving range, or nearly twice the range of the entry-level F-150 Lightning, which offers 370km.

According to Chevrolet, the Silverado EV WT has a towing capacity of 3629kg (8000lb) and capable of carrying up to 544kg (1200lb) in its tray. A Max Tow Package to be offered after launch increases this to 9072kg. 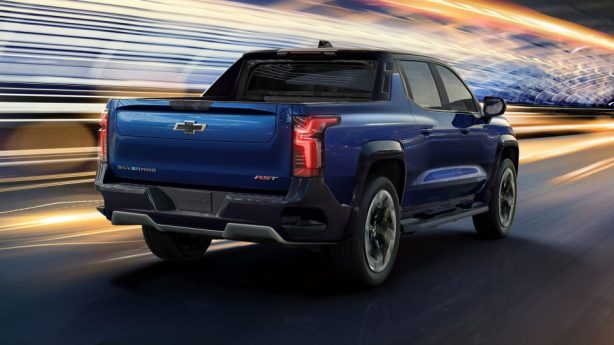 Its cruising range remains the same at 644km, while maximum payload comes in at 590kg, along with a 4536kg towing capacity.

Chevrolet says both variants are capable of DC fast charging at up to 350kW, enabling a quick 161km (100 miles) range top up in 10 minutes. Like most other EVs, the electric Silverado can act as a generator to power external electrical devices, providing a total of 10.2kW of continuous power through up to 10 outlets.

Underneath, the Silverado EV has more in common with a passenger car than a traditional full-size pick-up truck, featuring front and rear independent suspension and a large battery pack integrated as a key structural component of the chassis.

It also comes with rear-wheel steering, wheels measuring up to 24-inches – the largest ever fitted to a production car, and adaptive air suspension that can be raised or lowered by up to 50mm. 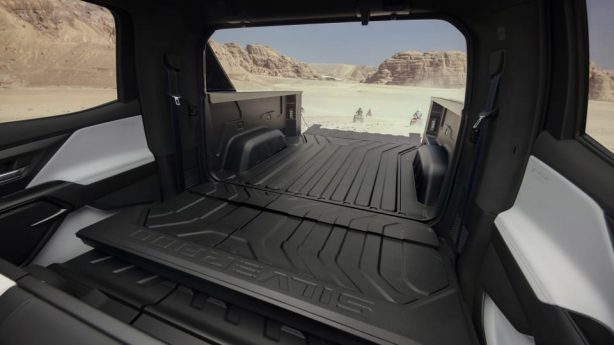 Other useful features include a Tow/Haul mode for easy towing, integrated trailer brake controller, a ‘midgate’ system which allows the divider between the passenger compartment and tray to be removed for longer items. With the 40:60 split rear seats lowered and the ‘Multi-Flex’ rear tailgate deployed, Chevrolet claims the load length expands to 3.3 meters, or nearly double the standard 1.8m tray.

There’s also a front storage area where the engine would normally live, which is capable of storing a large suitcase.

Inside, the Silverado EV RST comes with a gigantic 17-inch infotainment system running GM’s latest ‘Ultifi’ software, while the driver gets an 11-inch digital instrument cluster and 14-inch head-up display. The more utilitarian WT gets smaller but yet to be specified screens.

The RST also gets hands-free start which powers up the vehicle automatically when the driver enters with an “enabled device”.