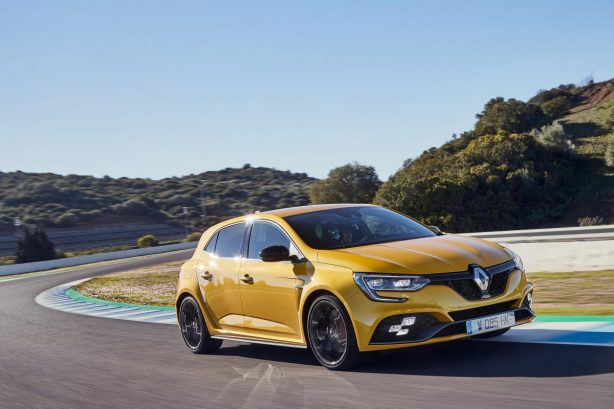 Renault has announced the highly anticipated Megane R.S. will arrive in Australia in September priced from $44,990 plus on-road costs.

Available in both manual and EDC twin-clutch automatic transmission for the first time, the French hot hatch also features a first in class four-wheel-steering system.

Powering the car is a 1.8-litre turbocharged four-cylinder engine that churns out 205kW of power and 390Nm of torque. 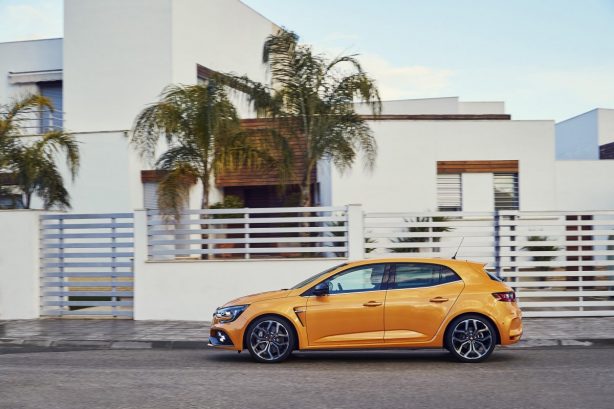 At speeds over 60km/h (or 100km/h in Race mode), the front and rear wheels turn in the same direction for increased stability.

At speeds of less than 60km/h (or at 100km/h in Race mode), the front and rear wheels turn in the opposite direction to give increased agility, particularly through tight corners.

4CONTROL helps drivers to position the car on the right line through corners in order to accelerate as quickly and as efficiently as possible. 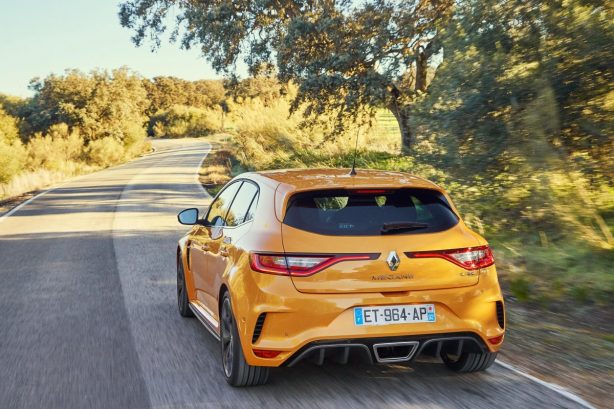 The Sport chassis is suggested for those drivers who like a sporty, but still refined, drive.

As an alternative, the Cup chassis receives revised springs, dampers and bump stops – it is 10 per cent stiffer than the Sport chassis. Its new Torsen mechanical limited slip differential provides different lock-up values under acceleration and deceleration for enhanced traction and higher cornering speeds.

The diameter of the front brake discs has been increased to 355mm (+15mm compared with the previous generation).

The brake pedal setting focuses on the accuracy of the pressure applied, enabling drivers to remain in complete control, especially on the racetrack. 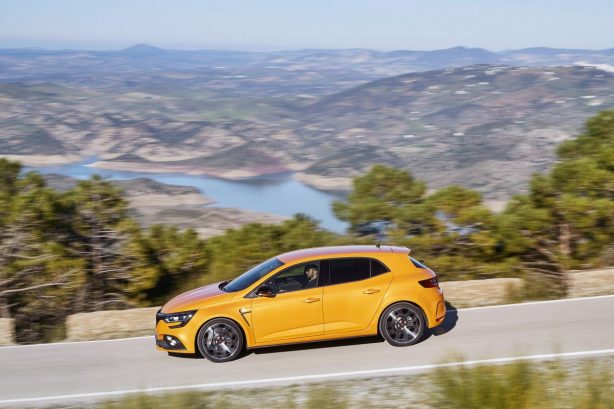 Available as part of the Cup Chassis Pack on the manual transmission are Brembo’s bi-material brakes.

In a world-first in this segment, the all-new Megane R.S. has shock absorbers with hydraulic bump stops all round, as standard.

Effectively integrating a shock absorber within the shock absorber, as the end of travel approaches, a secondary piston dampens the movement of the wheel before the bump stop.

By dissipating the energy without transferring it to the wheel – as a traditional bump stop would – the compression hydraulic stops help avoid any rebound and pendulum effects, enabling optimum control of tyre-ground contact and providing the feeling of having eight dampers on the car.

Debuted on Megane II R.S. in 2004 – ahead of all rival systems – the PerfoHub independent steering-axis front suspension epitomises Renault Sport’s expertise in chassis and suspension systems. Initially designed for use in motorsport, PerfoHub has adapted well to powerful front-wheel drive cars, especially when they are also fitted with a limited slip differential. 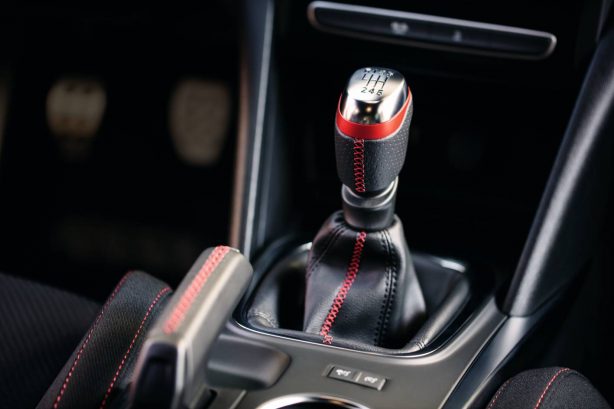 The all-new Megane R.S. gains the option of a six-speed EDC automatic transmission for the very first time alongside the widely-acclaimed six-speed manual.

In order to provide complete reliability, this gearbox – which is already in use on several models in the Renault range – has been strengthened to withstand the torque and revs of a sports car engine.

Based on the required take-off acceleration, in-gear acceleration and maximum speed, the Renault Sport engineers defined new gear ratios and specific shift patterns, associated with the MULTI-SENSE modes so as to adapt to all driving styles.

These shift patterns are:

The best gear is then selected to exit the corner as efficiently as possible. Launch Control is available in Sport and Race modes when the clutch and turbo are preloaded, enabling an optimum standing start.

When in Sport mode, traction control provides the driver with additional support.

Another focus was the twin-scroll turbocharger – used on the previous Megane R.S. – to improve torque at lower revs.

The engine also benefitted from surface treatments usually seen on engines from motor racing and super cars, such as a Diamond-Like Carbon (DLC) coating for the valve lifters and Mirror Bore Coating for the cylinder sleeves. 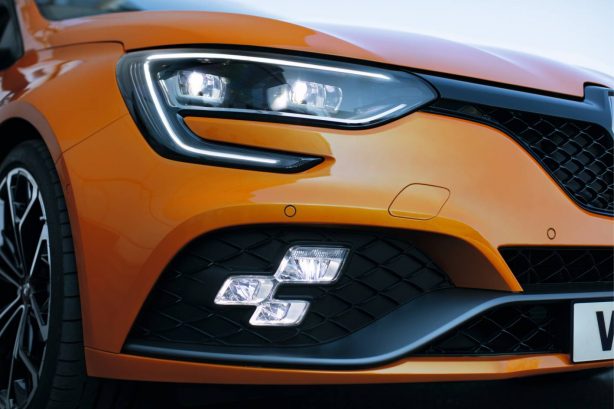 The R.S. Vision full LED lighting system – a world-first when shown on Clio R.S. in 2016 – combines four lights into one housing shaped into the Renault Sport chequered flag motif.

This housing contains side lights, fog lights, cornering lights and high beam and enables high performance at night – the lights have a 17 per cent higher range than on previous Megane R.S.


R.S. Monitor has been taken from the previous Megane R.S. and completely revised to be made more user-friendly in the all-new Megane R.S.

The R.S. Monitor gathers and summarises information from approximately 40 sensors around the car. This displays real-time sensors via R-LINK2 on acceleration, braking, wheel angle, 4CONTROL, temperature, lap times and speed.

The MULTI-SENSE system lets drivers customise their experience according to the circumstances. Five settings are available:

The various modes are accessed via the R-LINK 2 touchscreen tablet. The R.S. Drive button provides a shortcut to the Sport (short press) and Race (press and hold) modes. 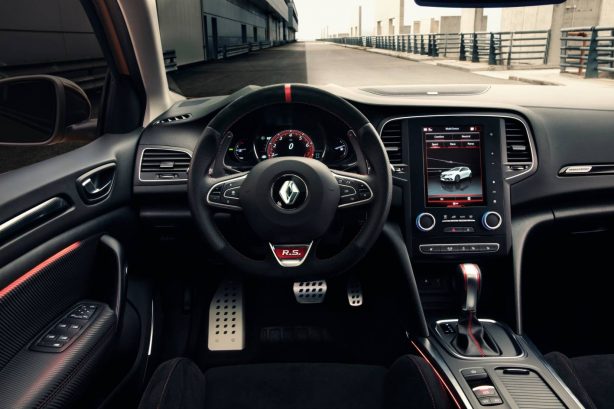 The all-new Megane R.S. provides a very high-specification of equipment – for both high performance and passenger comfort – as standard.

Inside, the driver and passengers will instantly recognise they are in a Renault Sport vehicle thanks to the chrome-plated R.S. door sills, custom R.S. roof lining and sports seats with dark carbon R.S. upholstery.

On the outside, the all-new Megane R.S. is wide and muscular – setting it apart from the Megane – thanks to its custom front bumper with gun metal grey F1-style blade and honeycomb front grille and rear bumper with functioning diffuser and central exhaust.

A rear spoiler increases the sporting stance of the car. Its standout R.S. Vision full LED lighting system in the style of a chequered flag provides a unique-in-segment technology in a distinctive design.

Further comforts such as an opening sunroof, Alcantara upholstery and 8-speaker BOSE sound system are available as optional extras.

The 2018 Renault Megane R.S. is available to order with first vehicles arriving in September for test drives and November for customer deliveries.