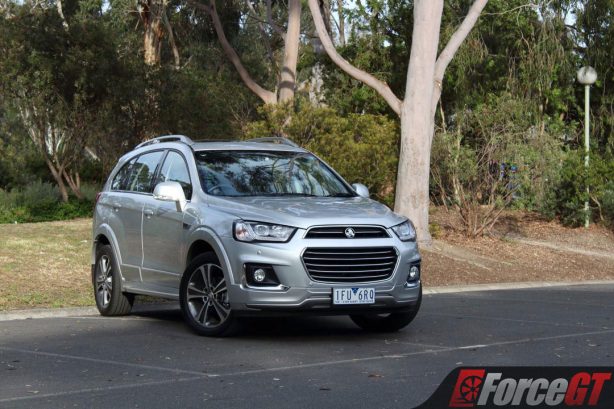 The Holden Captiva has been a mainstay of the SUV market since its release way back in 2006. Under the skin of this 2017 facelift model the Captiva still makes use of the now ten year old design. We’ve put the top-spec Captiva LTZ through its paces to see how well the mid sized 7 seater can compete against its much younger rivals.

From the front the latest Captiva looks pretty decent with a lot of design cues going on at the same time. It’s a little bit chaotic but overall the look works and Holden have done a great job of modernising the appearance. Once we move past the front end it’s pretty much the same old Captiva we’ve seen for years on the roads, it’s a very forgettable car that blends into its surroundings with no major impressive styling features as a hook point. 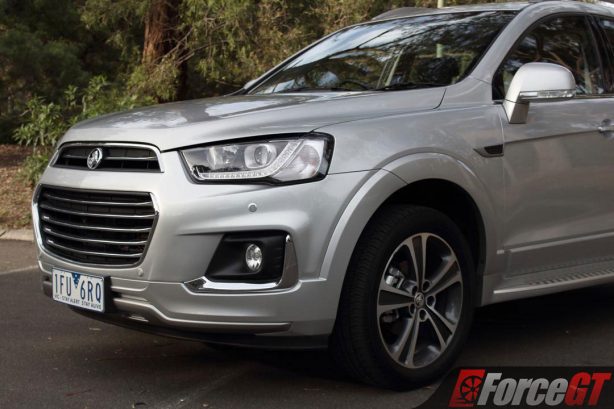 What it lacks in character on the outside is somewhat addressed on the interior with piano gloss black plastics and no lack of silver either. Some of the interior uses hard plastics which have been dressed nicely with funky patterns and splashes of metallic paint. Build quality inside was mostly fine though I wasn’t a fan of the door handles which flexed a little when grabbed with a bit of force thanks to the hollow plastic construction. 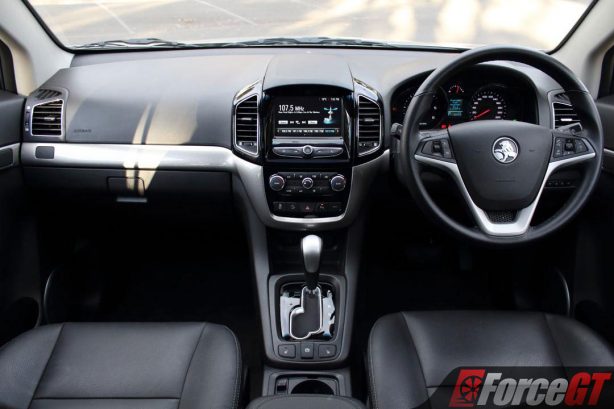 The heated seats are comfortable though lacking lateral support, a well thought out compromise as large side bolsters would make sliding in and out more difficult than need be. The seating position works well for drivers of all sizes and the usual assortment of controls for audio and cruise control can be found on the steering wheel. The wheel itself feels solid and comes wrapped in leather though the controls could have been positioned further to the centre as your palm will rest over them resulting in the occasional unintended volume change.

My personal favourite feature from the interior is the sliding drink holder which can tuck back under the centre console revealing a hidden storage spot below. The only thing that was out of place from a driver’s perspective were the trip computer controls. They’re mounted behind the wheel and quite low down making it difficult to toggle between the digital speed readout or fuel economy. 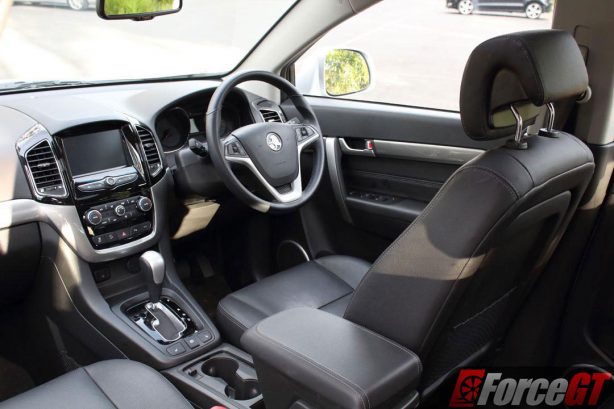 Visibility from the driver seat is above average with the Captiva feeling much more like a hatchback on steroids than a 7 seater SUV. A pillar visibility too was impressive leaving out any guess work required for navigating tight spaces. On sunny days there’s not much dash glare but the right driver’s vent did reflect into eyesight of the mirror which was occasionally distracting. And while the Captiva has great visibility you also get blind spot monitoring with visual alerts from the mirrors so lane changes can be done with confidence.

The infotainment unit in the Captiva is Holden’s smaller 7″ touch-screen which is hooked up to a fairly capable set of speakers which sound impressive thanks to the roomy acoustics inside. Apple CarPlay and Android Auto make an appearance and ease of use for the unit wasn’t an issue thanks to a simple menu system.

Moving towards the rear of the car the Captiva easily handles adults in the second row and for short trips the rear is fine too. Boot space with all seats up is only 85 litres, barely enough for some school bags or shopping, but once you collapse the seats you have access to a total of 930 litres. 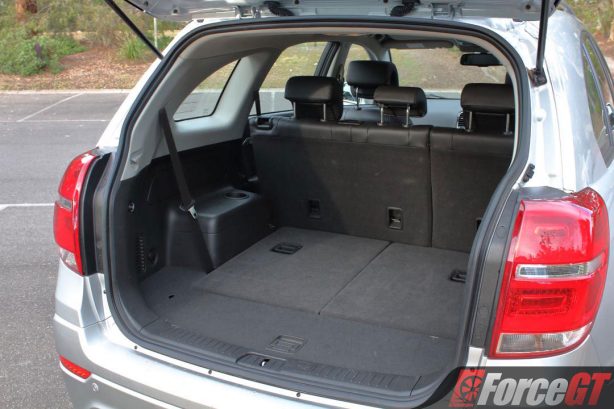 Driving the Captiva felt similar to many hatchbacks with the main difference being a higher seating position. The turn in was surprisingly crisp and really highlighted the lack of lateral support from the seats. At low speeds the power steering did feel a bit notchy but wasn’t an issue once moving. The AWD model we tested handled bumps and poor road conditions well, easily soaking up road imperfections and offering a comfortable experience. Larger bumps will take a little longer for the car to settle if taken at speed but for everything else nothing negative made itself apparent regarding the handling. 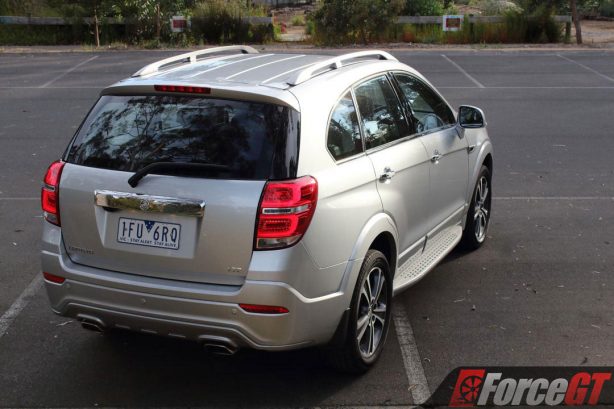 We drove the 135kW 2.2-litre turbo diesel powered offering and while the engine does sound like a truck when pushed it performs well with plenty of torque (400Nm @ 2000rpm) available down low and through the mid range. Acceleration comes on quickly when you need it and power delivery remained linear through the rev range. Braking performance was adequate with decent feel through the pedal and not too much slouching from the body towards the front when put on hard. 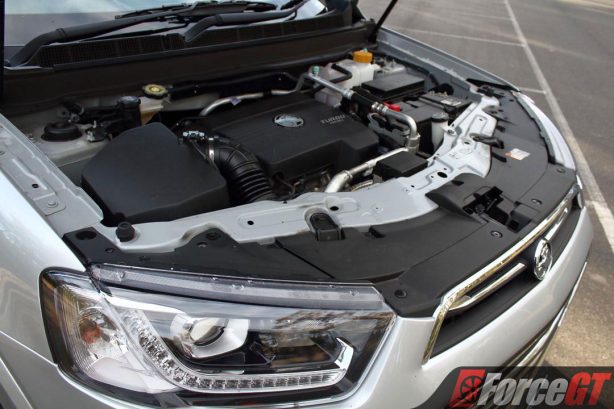 Holden claim an 8.5L/100km fuel economy figure and as with most of their claims they weren’t too far off the mark. We managed to pull a figure of 10.3L/100km mainly around town with a heavy foot and plenty of air conditioning. The car has an eco mode which restricts throttle input unless mashed flat which leads to a more relaxed driving experience overall and makes a real world difference to your economy.

When it comes to features Holden have added as much as can be easily added to the 10 year old design and the feature list won’t disappoint. Stand out features for the Captiva LTZ AWD we tested include:

The LTZ’s $41,490 sticker price undercuts most equivalent top-of-the-range models from rival makes and with this much standard kit loaded the Captiva does represent great value for those looking for a mid sized 7 seater SUV.

The updated 2017 Holden Captiva really surprised me by performing much better than anticipated. Yes there are some cost saving materials used throughout and the design is dated but all of this is reflected in the price, and for your money you get a capable and versatile SUV jam packed with features. For a sensible family orientated car that won’t break the bank Holden have done an impressive job of updating the Captiva to remain competitive against newer rivals.