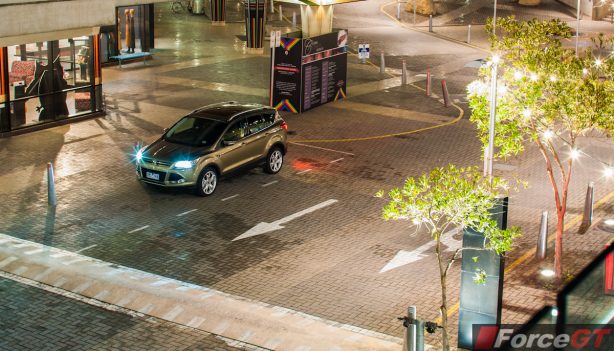 The original Ford Kuga was launched in Europe in 2008. However, it didn’t arrive in Australia until last year, towards the end of its model cycle, as Ford Australia scrambles to grab a piece of the lucrative mid-size SUV market. A few found homes but due to its high thirties entry price, it never really took off.

As with the latest Focus, the Ford Kuga will be sold in more than 100 countries worldwide under the manufacturer’s ‘One Ford’ global car programme. It also shares the Focus’ platform and powertrain. All these mean there is much greater economies of scale and is thus, reflected in the SUV’s sharper $27,990 entry price. That puts it right in the ballpark of popular models such as the Mazda CX-5, Kia Sportage, Mitsubishi ASX and Volkswagen Tiguan.

So, can the newcomer elbows itself to the front of the line in this talented and crowded arena? Let’s find out…. 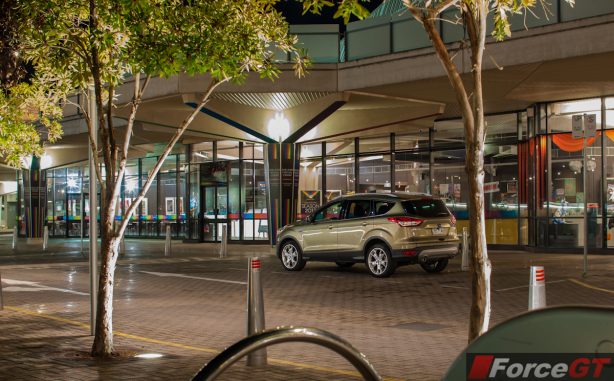 The all-new Ford Kuga was spawn out of the Vertrek concept car that made its debut at the 2011 Detroit Auto Show. Kudos must go to the designers for successfully carrying over much of the concept’s proportions and design details. Although the ‘S’ in the SUV acronym hardly justifies the space on this page, at least the Kuga looks the part.

Inside, it borrows heavily from the latest Focus, which means decent interior quality and a modern looking dash, albeit one overflowing with buttons. There are also two coloured (mono on base model) LCD screens on the dash, one small one in front of the driver for a multitude of driving information, and an equally minute one for infotainment in the centre.

There are three models to choose from – Ambiente, Trend and Titanium – and the availability of either the standard EcoBoost petrol engine or optional turbo diesel on the Trend and Titanium. For this test, we have been supplied with a top of the range Kuga Titanium turbo diesel with optional Technology Pack (more on this later). All up, the test car comes in at just over $50,000, excluding the new Ginger Ale prestige paint at $385, which the car also wears, taking it perilously close to the premium segment occupied by the BMW X1 and Audi Q3. 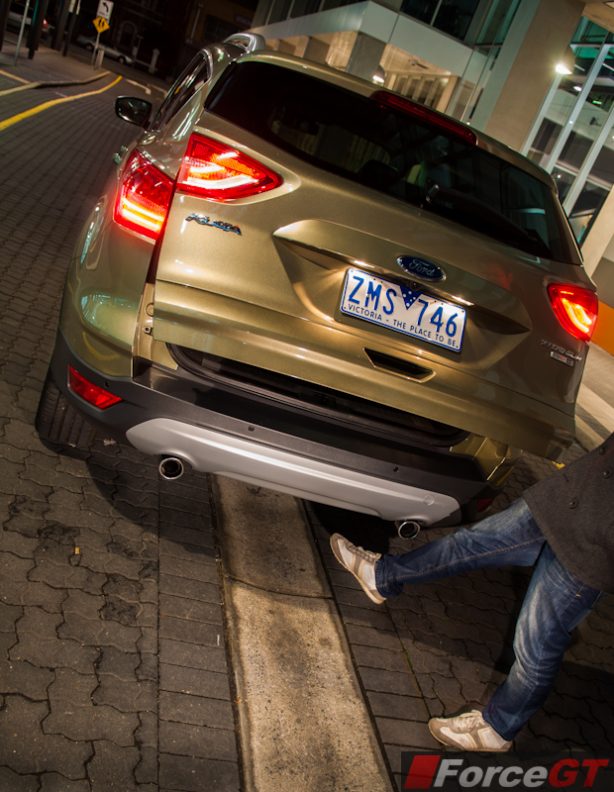 Nevertheless, the new Kuga has much improved packaging and more interior space, despite sitting on the same 2,690mm wheelbase as the previous model. Much of the added space has been devoted to the rear passenger compartment and luggage area – two critical purchasing criteria for families.

Wave your foot under the rear bumper and the boot pops open automatically to reveal 442 litres of luggage space – 46 litres more than before. The rear seats also fold flat in one movement to create a cavernous 1,928 litres – a massive 600 litre more than the old model.

Like a sprawling villa, there’s plenty of head and legroom in the Kuga, even for above average height passengers. The rear seat backs can be reclined over a 10-degree range, too, allowing rear seat passengers a more comfortable seating position.

While the Kuga’s design and packaging are a triumph, the same can’t be said about its handling. Around corners, the high-riding SUV feels as compose as a highly strung monkey during feeding time, with imprecise handling and considerably more body roll than you’d expect.

Its electric power steering, while precise, is light and too eager to self-centre. It is also numb as a block of ice with hardly any feedback. The driver is also fully aware of every single 1,738kg of the Titanium’s weight. 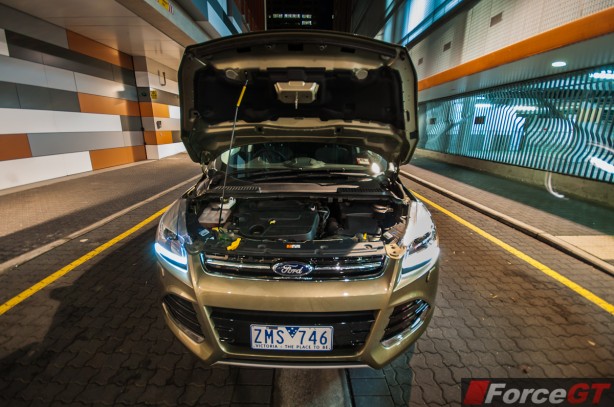 It isn’t all bad news though; the 2.0-litre 4-cylinder turbo diesel engine generating 120kW @ 4,000rpm and 340Nm @ 1,750rpm is lively and mates beautifully with the quick-shifting 6-speed dual-clutch transmission.

There is also ample grip from all four corners. The Kuga’s intelligent all-wheel drive system (front-wheel drive only on base Ambiente) can send up to 100 per cent of the vehicle’s power to the front or rear wheels, depending on conditions. Ride quality on our pockmarked thoroughfares is firm but not crashy.

Unlike the Kia Sportage, there is no hill-descent control for the occasional track out of the urban jungle. 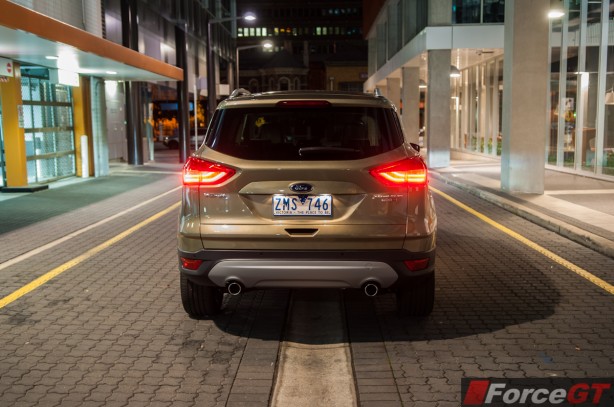 According to Ford, the new Kuga has been engineered to be as visually appealing up close, as it is from a distance. The spaces between panels is said to be no wider than 0.5mm, and we find no reason to disagree.

There is, however, minor squeaks from around the cabin in our 8,000km test car.

Our week long test returned a combined average of 8.5L/100km of diesel, with a good split of city and country driving. That’s against Ford’s claim of 6.4L/100km. 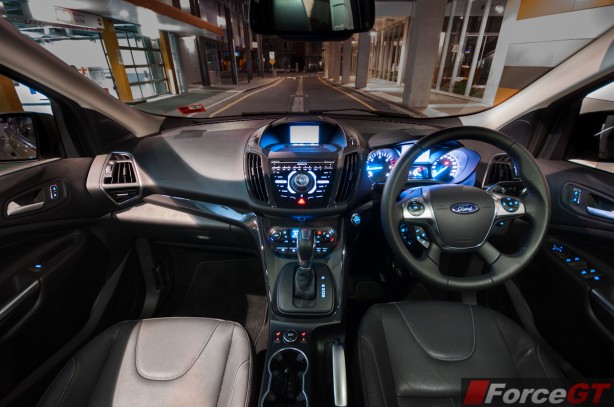 The test car also comes with a $2,650 Technology Pack, which is recommended.

With a lower entry price, generous equipment, clever packaging and crisp styling, the Ford Kuga should appeal to the vast majority of medium SUV buyers. However, it isn’t the sharpest to drive. That accolade goes to the Mazda CX-5 and Volkswagen Tiguan.