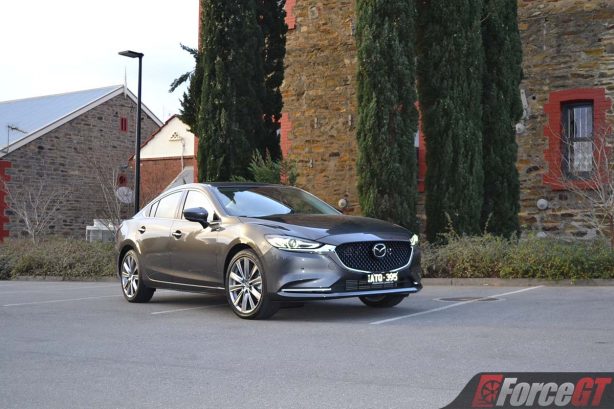 With SUVs now becoming the vehicle of choice for most families, there’s never been a better time to get into a traditional mid-sized sedan. You see, in order to tempt increasingly rare buyers out of the urban monstrosities, carmakers are throwing everything they have into the humble sedan, which was once the darling of the industry.

Take the Mazda6 GT here for example. Rejuvenated for the second time since its 2012 launch, the new 6 is one of the best equipped in its segment and a premium product in everyway except for its badge and down-to-earth price tag of $43,990, plus on-road costs.

What do I get for the money? 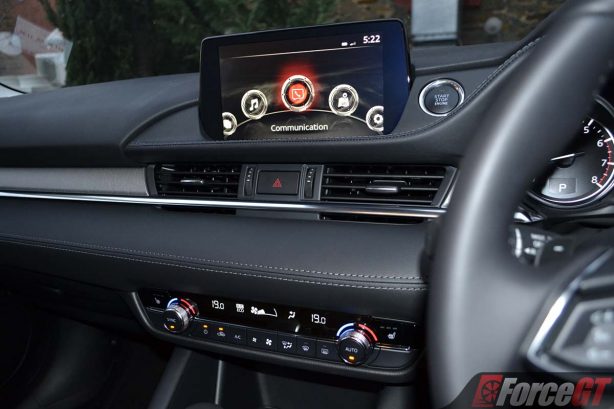 All that and it’s not even a range-topper!

Like a good bottle of wine, the Mazda6’s timeless elegance gets better with age, too. Its new front fascia is especially classy with the latest redesign focusing on the grille area. Its bottom edge now sits lower and the tips of the signature wings flow along the base of the headlamps to accentuate the car’s width. The grille’s chrome surround are thicker, while its opening has also changed from the outgoing model’s fin design to a 3D mesh pattern similar to those on the latest Mercedes-Benz. 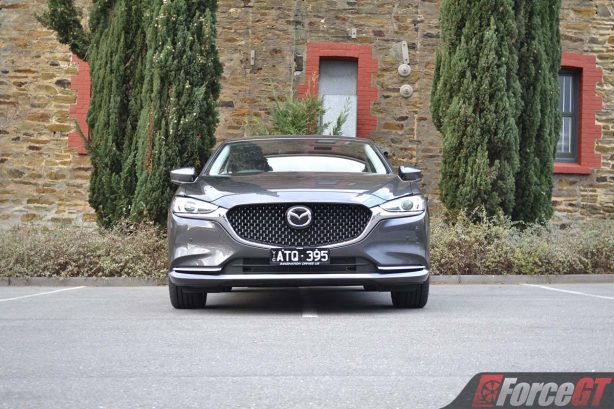 The car’s headlights are completely new, too, and now features full LED technology including the turn signals for a properly premium look. The fog lamps have also been integrated into the headlight units to free the lower part of the bumper of clutter. In their place are slender chrome trims that are connected via a slender horizontal air intake to emphasise the car’s wide stance.

The ducts beneath the trim pieces also contribute to improved aerodynamics by channelling air across the front tyres.

Around the back, 2018 updates include body-colour lower rear bumper section, tailpipes that are spaced wider apart to again, emphasise the Mazda6’s width, a new boot lid and full LED tail lamps.

Rounding out exterior makeover is a fresh set of 19-inch alloy wheels finished in Bright Silver which contrasts beautifully with the “Machine Grey” metallic paint.

If the Mazda6’s elegant sheet metal weren’t enough to seduce buyers, its completely overhauled interior would likely seal the deal.

The new dashboard design is one of the best we’ve come across this year, and that includes premium models like Lexus and Audi.

And if you haven’t guessed it, the keyword here is again ‘width’. 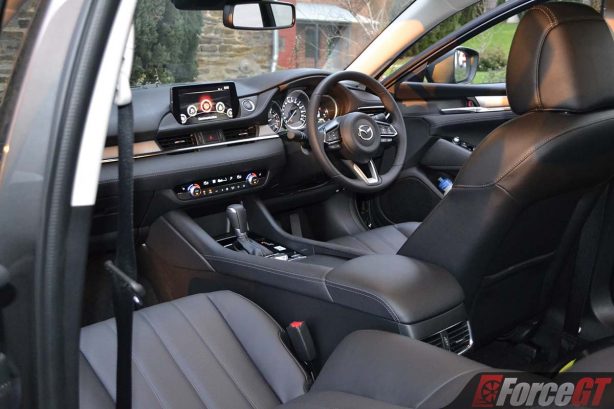 Mazda says that by matching the heights of the centre and side air-con vents, the designers have increased the dashboard’s ‘lateral flow’. The side outlets that extend into the door trims are especially concept car-like and not only make the dash appear longer but also give the cabin a premium, wrap-around look.

Clutter has been reduced to a minimum with only the HVAC controls left on the main dashboard, while everything else is controlled via a rotary knob on the centre console – one of the best in the car world.

Everywhere you look, the cabin feels top notch with high-quality padded plastics and leather covering on the upper dash and front and rear door cards. The knurled knobs that click delicately also remind us of Audi’s benchmark interior. 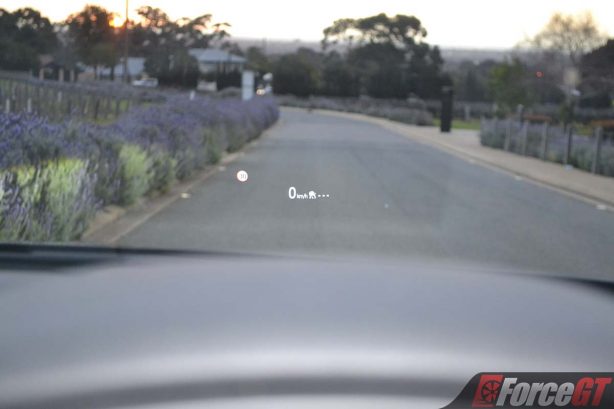 The upmarket feel continues with the updated Heads-up Display which presents useful information such as real time speed limit, digital speed readout (finally!), sat-nav instructions and cruise control information onto the screen directly in front of the driver.

Mazda’s MZD Connect infotainment system is also one of the easiest and most intuitive to use. It has grown by an-inch and can be control either directly via the touch screen or using the big rotary controller mounted on the centre console.

The Mazda6’s redesigned seats now have thicker padding and wider seat cushions for extra comfort. There are seat warmers for both front and rear (outboard) passengers, too. 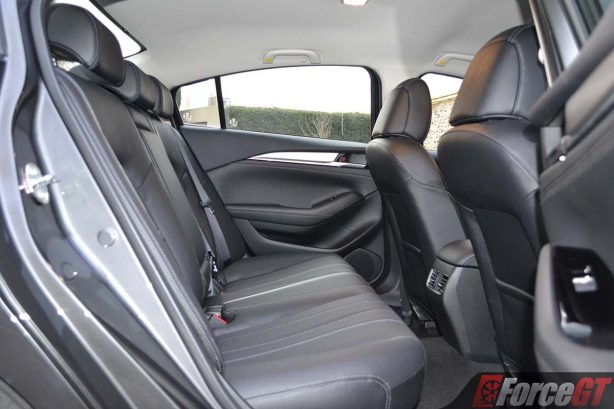 Front and rear head and legroom are good but the sexy tapering roofline does rob some headroom at the back, especially for taller passengers.

The doors open wide making entry and egress easy for those with children or elderly to ferry.

Smartphone addicted teenagers will also welcome the USB ports built into the rear centre armrest that ensure they never run out of juice on any road trips.

At the back, there is 474 litres of boot space that can be expanded by dropping the seat back via the boot-mounted release levers for carrying longer items. 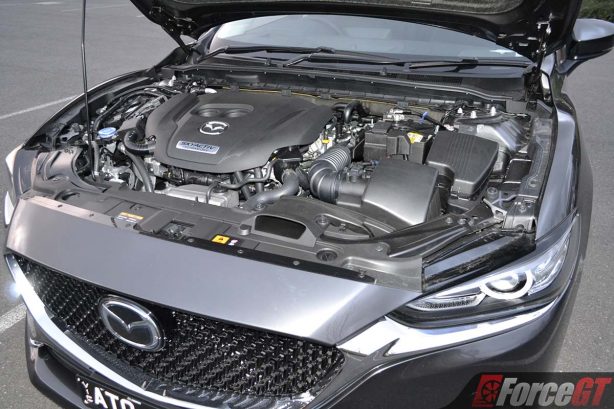 New to the 2018 Mazda6 GT is the 2.5-litre turbocharged inline four pinched from the CX-9. It puts out 170kW of power and an oiler-like 420Nm of torque, and is married to a six-speed automatic transmission that drives the front wheels.

The extra firepower means the Mazda6 finally has the punch to match its capable and entertaining chassis.

It’s no performance car but acceleration is brisk. There’s good induction noise when given the boot, too although I suspect its been artificially enhanced via the speakers. Power delivery is linear with no noticeable delay.

The six-speed automatic – while a couple cogs short of some rivals – is smooth and quick shifting. It’s also well programmed, making the steering wheel paddles almost redundant unless you insist on doing it yourself.

As with the pre-facelift model, handling is one of the Mazda6’s key strength and the new model is now even better with Mazda’s innovative G-Vectoring Control which electronically apportion torque to either front wheel. It handles corners with poise, helped by decent grip from the 225 section tyres.

Its re-calibrated steering feels natural and is now more precise and responsive, giving the car an agile feel. There is also hardly any steering wheel tugs despite the muscular torque going strictly to the front wheels. A feat worth celebrating.

Mazda used to fall down on Noice, Vibration and Harshness (NVH) but not anymore. The new 6 is almost as quiet and refined as some premium models costing significantly more.

Mazda’s running improvement to its flagship sedan has ensured it holds its own against new rivals. Its classy good looks, premium interior and solid built quality and reliability makes it proposition.

Together with a punchy new engine and impressive standard equipment, there’s never been a better time to get into the new Mazda6.