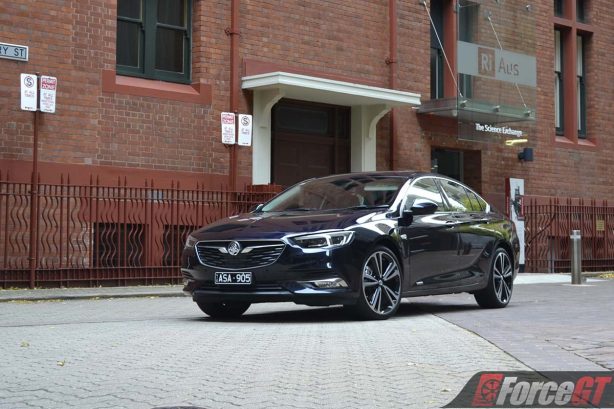 Badge engineering is fraud with danger especially for a model as iconic as the Holden Commodore. History is littered with examples of this failed undertaking including the Nissan Bluebird-based Ford Pintara and Saab’s version of the Subaru Impreza wagon, the 9-2X.

Holden of course, is no stranger to this exercise, either. Remember the Camry-based Apollo?

There is generally nothing wrong with the car they are based on, except buyers usually prefer the original item given the choice, and why would you buy a Camry with a Holden badge when you could get one from a Toyota dealer?

But with the demise of local manufacturing and our relatively small market, Holden has little choice but to source its products from sister companies within the GM empire. 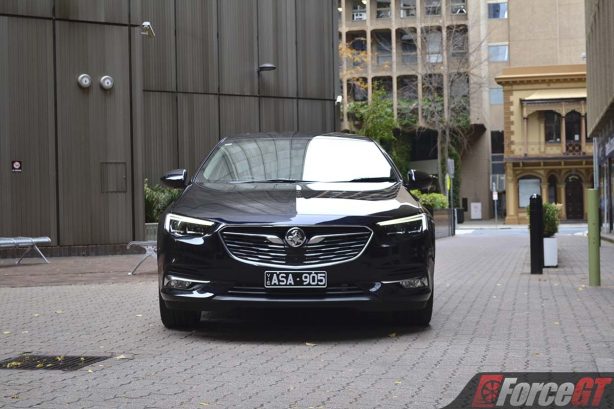 The 2018 ZB Commodore is based on the Opel Insignia, which should be no stranger to most. It made a brief local appearance back in 2012-2013 in its previous iteration, and more recently, as the Holden Insignia VXR. It’s a compelling product, with attractive design, good built quality and well sorted handling.

But will Australians be convinced with Holden’s latest badge engineering effort?

For a start, it might be a little unfair to call this a badge engineering exercise, as Holden was involved right from the beginning of the Insignia’s development.

Yes, the Commodore shares much with its European counterpart but its ride and handling characteristics, along with the V6 engine are unique to Holden, as the company thinks the wholesale change from rear-drive and no fewer than 6-cylinders to front-wheel drive and 4-cylinders is too much of a seismic shift for the Commodore’s audience.

That’s a wise move because the V6 gives the Commodore a sports sedan feel that will be familiar to the Commodore’s buyers. 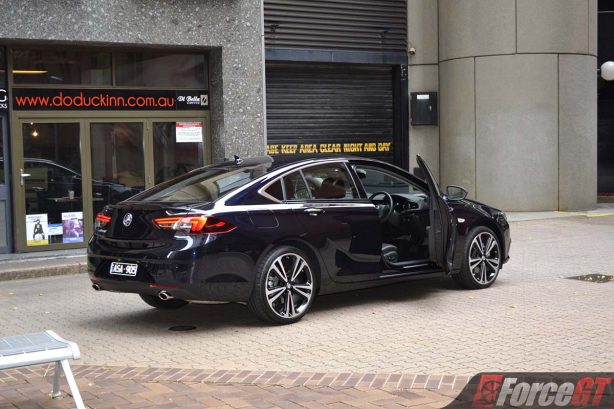 Prices start from $33,690 for the entry-level LT, a reduction of $1,800 compared to the previous generation, while our one down from the top Calais-V AWD test car comes in at $51,990, a drop of $4,760; all before on-road costs. Incidentally, the Calais is the only badged carried over to the new range, too.

The shift to European design means the new ZB Commodore is less masculine compared to the bulging wheel arches of its VF predecessor. The edges are now softer and the five-door liftback design not only brings an extra level of practicality, but also sleek Audi A7-aping silhouette. 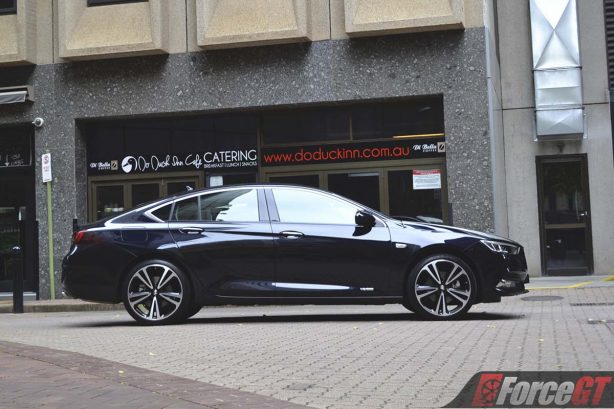 Inside, the cabin is positively more elegant and sophisticated than its predecessor. The dashboard flows cohesively into the door trims and centre console, while most touch points are covered in soft padded plastics.

In front of the driver, the Calais-V’s analogue instruments are augmented by a customisable 8-inch colour digital driver’s display that brings a raft of information, including clever timing that tells you the gap with the car in front. Some of the information are also duplicated in the crisp head-up display that’s standard on the Calais-V.

There’s a general air of quality about the new model that is more in line with its European rivals like the Volkswagen Passat and Skoda Superb.

The back-friendly AGR rated driver’s seat is not only supremely comfortable for long haul driving but comes with massage function and adjustable side bolsters and under thigh support. Together with the reach and rake adjustable steering, it’s not hard to find a good driving position in the new Commodore. 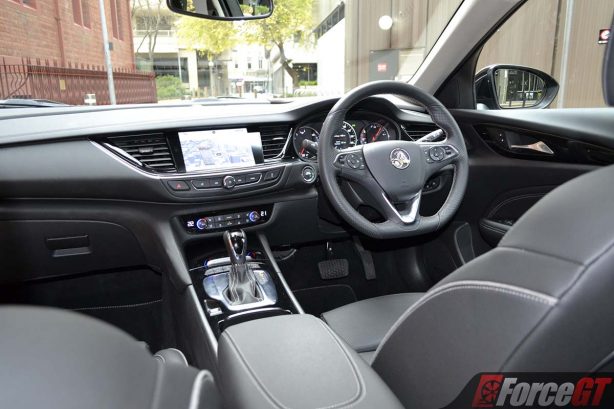 Its overall size is bigger than you might think, too, with most dimensions sitting between the VE/VF and VY/VZ. Interior space is relatively generous both front and rear even with the standard sunroof.

The large and wide opening tailgate reveals a useful 490-litres of boot space that is expandable to 1,450-litres with the 40:20:40 split rear seats folded. Underneath the boot floor is a space saver spare and subwoofer for its punchy Bose Premium Audio system.

Sadly, like its VF predecessor, the A-pillar is still relatively thick and combined with the window mounted wing mirrors, forward visibility out of corners can be a little tricky. 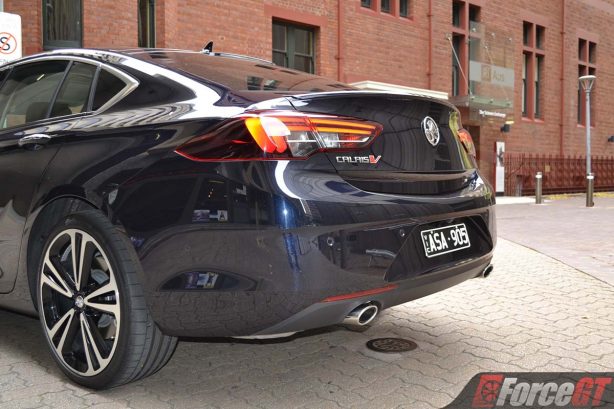 The new Commodore rides on GM’s E2XX platform – itself an evolution of the Epsilon II platform that underpinned the previous Insignia. It’s lightweight construction results in a claimed 200 – 300kg weight savings against the superseded model, although our Calais-V is just 21kg lighter than its predecessor.

And because Holden engineers were engaged from the outset, the Commodore has been put through more than 200,000 kilometres of rigorous testing on Australian roads and at the Lang Lang proving ground to ensure it’s right for Australians.

The car’s drivetrain calibrations, steering and suspension have all been fine-tuned to suit our tastes and unique demands.

There are three different suspension tunes developed specifically for the Commodore. Luxury focused models such as the Calais-V here gets comfort-focused ‘Tour’ setting. Sports variants employ a slightly firmer ‘Sports’ set up, while the performance flagship, VXR offers an additional ‘Performance’ tune.

As a result, the German-built Commodore is imbued with familiar Holden DNA, from the way it drives to the way it sounds. 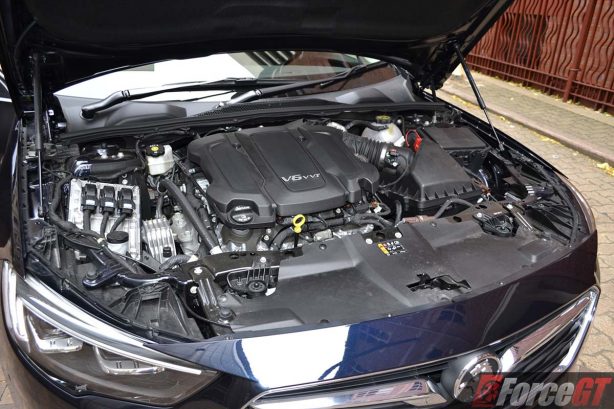 In fact, the V6 plays a much better tune than its previous iteration in the VF with a deep, sporty note across the rev range. Power is also up by 25kW to 235kW, while torque has improved by 31Nm to 381Nm – though accessible from a relatively high 5,200rpm instead of 2,800rpm in the VF.

The new 9-speed automatic is smooth in normal driving but a little dim witted in manual mode, taking a split second to react to fingertips commands. Thankfully, it has the smarts to be in the right gear most of the time while also adjusting its shift behaviour seamlessly to suit your driving style when left to its own devices. It will also hold gears at redline which should please drivers.

Body control on our fixed rate dampered Calais-V is good with very little vertical movement around the bends. It also strikes a good balance between ride-comfort and handling which suits the Calais luxury-focused brief. 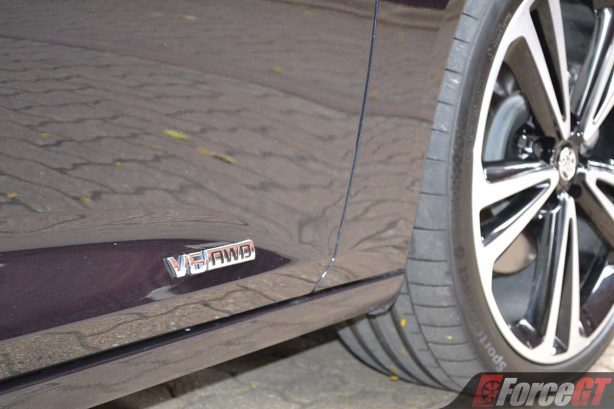 Standard on all V6 models, the adaptive AWD systems employs Twinter’s twin clutch concept that uses one clutch to control torque to the right rear wheel independently of the clutch controlling the left, giving the Commodore its first torque vectoring system. It is predominantly a front-wheel drive with up to 50 per cent of torque sent rearwards when required.

Needless to say, the new Calais-V feels more planted around the bends than its predecessor, with all four wheels clawing to the tarmac like a koala being dragged out of bed. The front and rear suspensions work in harmony to tackle mid-corner bumps with inspiring stability, while the steering is precise and pleasingly communicative.

In fact, the Calais could almost be described as agile, with changes in direction executed swiftly and confidently at most speeds.

The cabin is generally hushed but let down by noticeable wind noise at freeway speeds. 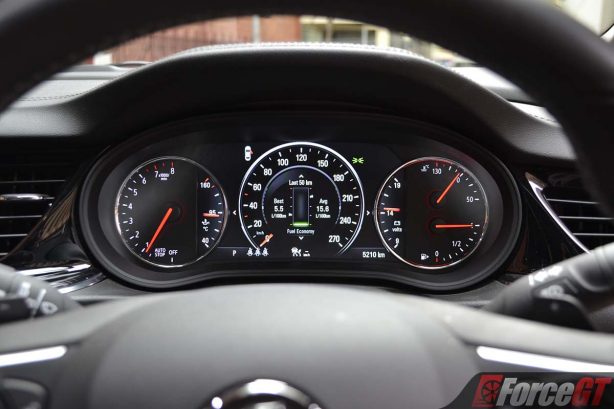 Officially, the 3.6-litre V6 consumes a combined average of 9.1L/100km; although the best we could manage was 11.9L/100km after a week of hard driving with 65 per cent spent in the urban commute.

However, the good news is the V6 will happily slurp on the less expensive 91 RON. Service costs are also capped for the first seven trips (or 84,000km) to the workshop, costing a total of $2,153.

The imported Commodore’s built quality is generally good, let down only by the insistent rattle from behind the steering wheel which gets a little annoying if you have the music turned down.

While it may not be rear-wheel drive or indigenous to Australia, the new ZB Calais-V has been given such level of local engineering that it has inherited most of the drive and handling traits that Holden is renowned for.

And in V6 AWD guise, the new Calais-V actually feels more agile and sure-footed than ever before, yet is generous and comfortable inside.

Together with a generous 7-years warranty and some of the most sophisticated technologies to ever feature on a Commodore, the new model is certainly worthy of the iconic badge.