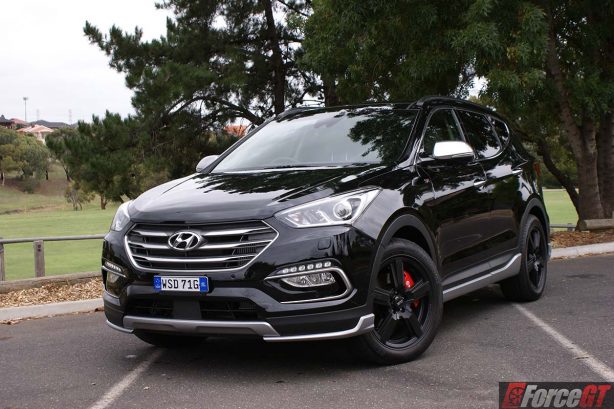 It’s an odd feeling to be able to say you admire a Hyundai, step back to the company’s early days and the notion would be laughable – Hyundai, a great car?

It’s been a long time coming for the Korean automaker, however, their current range of vehicles, specifically the Santa Fe, finally rid the public’s distaste surrounding the brand. To us, the Santa Fe represents a car that has undergone a great number of refinements; it’s both functional and tastefully designed, it’s a car you would be proud to have in your driveway, a car you would be proud to own.

The SUV comes in four trim levels: Active, Elite, Highlander and the recently introduced SR for those looking for a hotted up sports wagon. The Active starts at a modest $38,490 with a choice of manual or auto, the Elite is $49,990 with an automatic transmission. The Highlander and SR both crack over the $50k mark with the Highlander sitting at $55,990 and $59,990 for the SR. All prices exclude on-roads and metallic paint will cost you an additional $595.

I was supplied both the Santa Fe Highlander and the flagship SR variant for evaluation. Both models share the same standard equipment list with the SR getting a more sporty makeover. 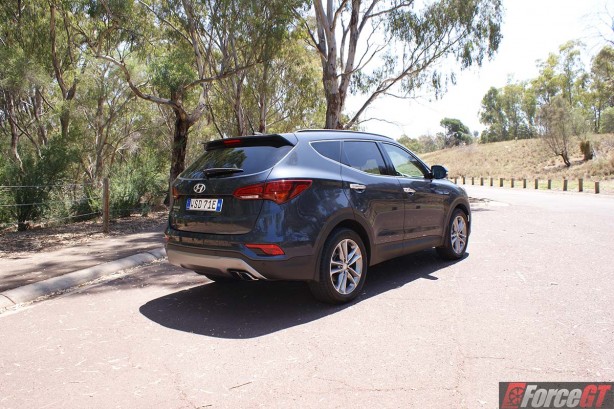 In the rear, the bumper gets a new silver-effect skid plate, dual trapezoidal chrome exhaust tips and redesigned tail lights.

Hyundai also boasts about their improved suspension package which includes firmer springs and Australian tuned dampers. Granted it’s nicer to drive however, the more adventurous driver will need to be more careful considering the ground clearance has dropped from 200mm to 185mm.

The SR variant gets its signature sporty touches including an aggressive sports body kit, matte-black Oz racing 19″ wheels and red Brembo brakes all supported by a high-quality H&R suspension kit. 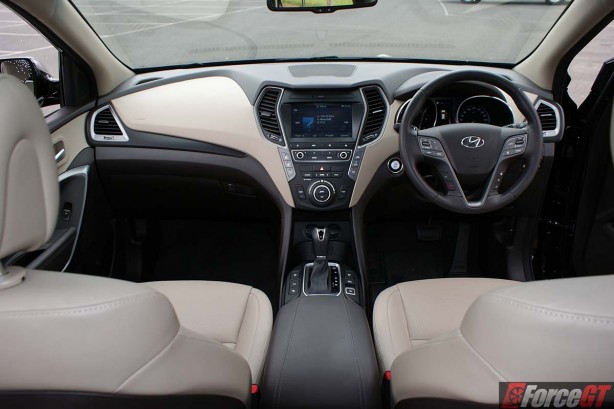 From 2015 the Santa Fe came standard with seven seats, improving the vehicle’s practicality as both a people mover and capable SUV.

The front seats are very comfortable for long trips and both feature heating and ventilation. The middle row also has adequate legroom for passengers with creature comforts such as heated seats, reclining action, a window cover and air conditioning vents. As for third-row passengers, if you’re an adult, don’t bother jumping in… the middle row sits so far back that passengers in the third-row have barely any room to wriggle. You also sit too high up leaving you cramped with your head touching the roof. However, for the kids the 3rd row is perfect. It even has its own climate control dials! 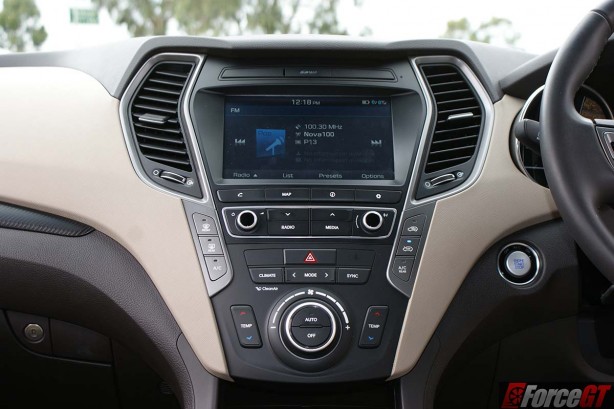 The focal point of the interior is the large curved dashboard with its symmetrical layout. Controls are large and easy to use and the 8-inch navigation system is in perfect reach of the driver.

The interface on the sat-nav is well laid out however the graphics are a little dated. It features the basics such as Bluetooth hands-free and audio streaming, there is also a stereo auxiliary input and a USB port for music. I was disappointed to find that neither the Highlander or SR had digital radio DAB+, I sorely missed the ‘more 80 90s’ channel.

The SR’s cabin is somewhat lacking, unfortunately. Hyundai chose not to flow the sporty guise into the interior, as not a single SR badge or red stitching can be seen. Instead, a mellow beige leather interior flows through with identical styling as the Highlander. At the least, I would have expected adjustable bolsters and steering mounted paddle shifters. Where is the sensation of sport from inside the car? 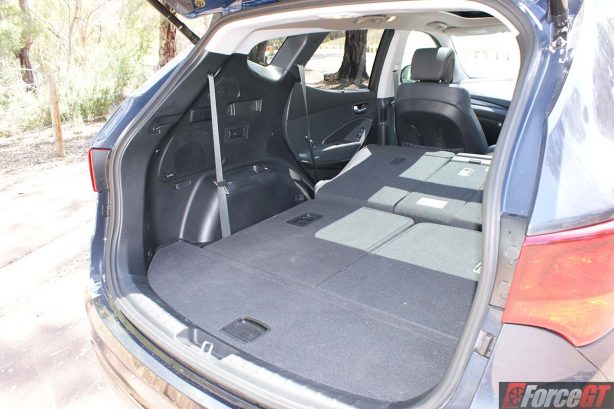 Adding further value to the Santa Fe, the mid-spec elite and better receive Hyundai’s Smart Tailgate with hands free operation. While other vehicles in its class open their gates with a foot-sweep motion, the Santa Fe relies on the key proximity to open the gate. Stand in range for 3 seconds and the gate will open before you.

With the rear open its easy to see how much storage is available. Folding the 3rd row down provides a decent 506-litre storage capacity, to further increase storage the middle row can also be folded, increasing the capacity to that akin to a minivan with 1,615-litres. 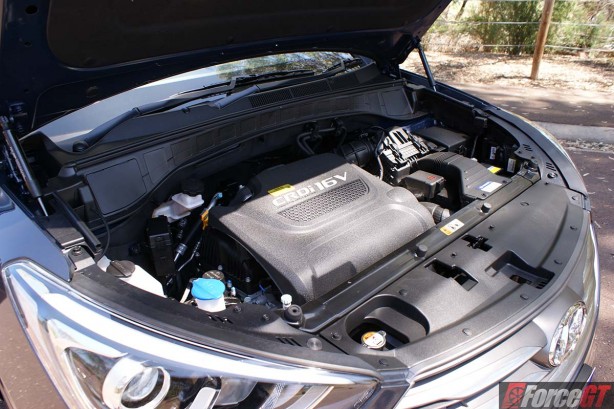 The 2.2-litre turbo diesel engine is a pretty impressive unit. The 2016 engine comes slightly tweaked increasing output by 2kW and 4Nm for a total of 147kW and 440Nm of torque. Peak torque builds from as low as 1,800 rpm making low-speed traffic maneuvers a breeze. Other vehicles in the same class have been sketchy at times, a distinct lack of confidence in takeoff torque makes you think twice before entering traffic. The engine is relatively quiet for a diesel and not as grumbly as other engines or this size, at cruising speed it sounds and feels similar to that of a petrol variant.

The power plant drives through an all-wheel drive system and comes paired to a six-speed transmission with the ratios well matched to suit the engine’s torque characteristics. The transmission is pleasantly smooth and gear changes are rather quick for a torque converter automatic. 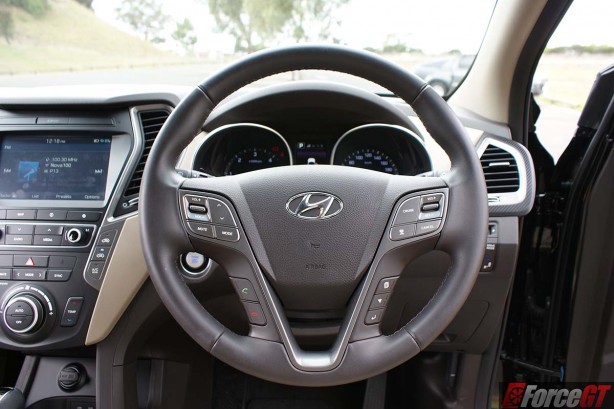 The steering wheel is easy to grip with all controls well placed and intuitive to use. Hyundai uses an electric power steering system allowing for different handling modes to be set. On the comfort setting, it’s almost possible to make a 3-point turn with just your pinkie. There is a downside to the electric steering; it feels lifeless and the driver feels almost entirely disconnected from the vehicle and the road, even on the SR with its uprated suspension.

Handling is acceptable. While not exactly of European standards it does turn into corners with ease and relative stability. Unless pushed to its limits, the vehicle remains balanced and composed. The SR does outperform the Highlander thanks to its H&R suspension, it can be pushed through corners with greater confidence and significantly less body roll.

The standard suspension on the Highlander does a great job of dampening out unsettled roads with very little road noise in the cabin. However, the SR’s firm dampers does make for a slightly harsher ride. 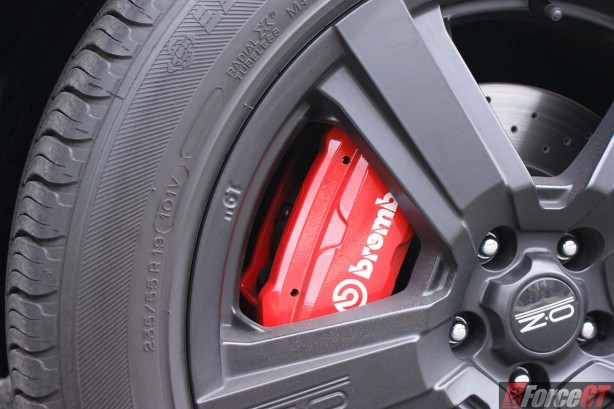 Brakes on the Highlander and SR are wildly different. I found the Highlander’s brakes to be spongy and unable to pull the vehicle to a stop without applying a significant amount of force, there is around 15% dead-zone. The SR features upgraded Brembo 4 pot brake calipers and drilled brake rotors. Immediately upon touching the pedal you can feel some application of the pads, there is virtually no dead zone and the brakes are well suited to the almost 2-tonne vehicle. Having the heavier duty brakes gave me more confidence that the vehicle could stop in an emergency. 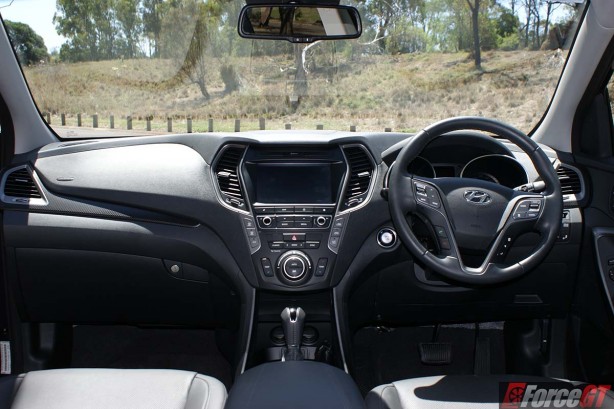 The interior is well-trimmed with a mix of leather, soft-touch surfaces for the upper dash and door, and hard plastics. The dashboard also features a carbon-look textured trim which separates the leather from plastic trims.

A testament to Hyundai’s ever improving build quality, the car did not exhibit any squeaks or rattles on any type of driving surface during the course of evaluation. 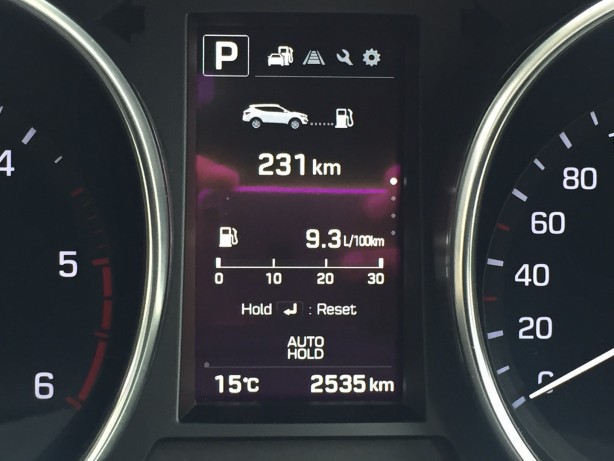 The test conditions were a good mix between city and freeway driving. I achieved a fuel consumption average of 9.3L/100km over 530km for the SR and 10.2L/100km over 460km in the Highlander. While Hyundai claims the vehicle can meet an average of 7.3L/100km, we were unable to even get close to it. Still, the real world figures aren’t poor for a seven-seat family SUV.

Both the Highlander and SR now come with a 550W Infinity audio system which I consider to be on par with the Bose and Harmon Kardon systems. The audio was crisp and the included subwoofer is sufficiently punchy for my bass needs.

If I had one major gripe with this vehicle it would be the third row design. The height of the seats cramp your posture while the distance from the middle row seats leave you squirming for leg room. The outward vision is also poor leaving passengers nauseous from even short drives.

Other than this oversight, the vehicle is a major step up in quality and a pleasure to drive. The Santa Fe serves as a reminder of how far Hyundai has come, no longer can they be considered second tier.