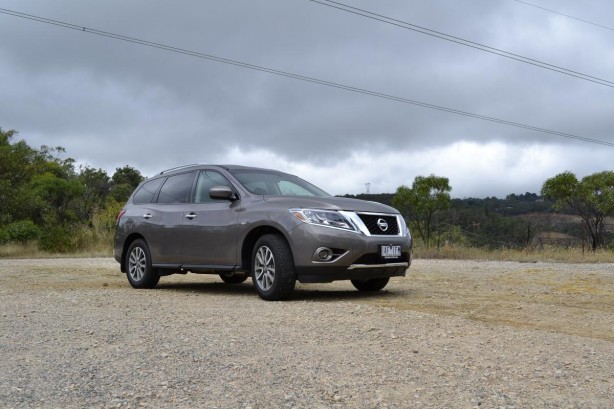 The last-generation Nissan Pathfinder was an unapologetically rugged SUV, with genuine rock climbing and mud crawling abilities. Built on a tough ladder-frame chassis shared with the Nissan Navara work horse, it came with a full set of low range gears and lockable diff.

Its off-road abilities meant refinement and comfort took a back seat and were below class benchmarks. But as we all know, the toughest terrains most urban SUVs see are kerb islands and flooded road ways after a heavy downpour. In other words, the Pathfinder didn’t fit the profile of Mum and Dad SUV buyers.

Nissan hopes the 2014 Pathfinder, in contrast, is what the doctor had ordered. It has ditched its heavy utilitarian ladder chassis for lightweight monocoque construction, its industrial sounding 2.5 and 3.0-litre four-cylinder diesel for a more “cultured” 3.5-litre petrol V6 and its standard 4×4 dual range running gear for simpler two and all-wheel drive setup.

Offered in three grades, ST, ST-L and Ti, the new Pathfinder kicks off at $39,990, unchanged from the previous model. It tops out at $64,890, a whopping $11,500 less than the outgoing 3.0-litre turbo-diesel 4×4 Pathfinder. There are also new driver assist technologies such as Around View Monitor to help manoeuvre the car in tight city laneways and carparks, and a Tow Mode that provides smooth and constant acceleration when towing.

So, would the softer new Pathfinder endear itself to modern SUV buyers that place comfort and convenience over terrain conquering abilities? Let’s find out…. 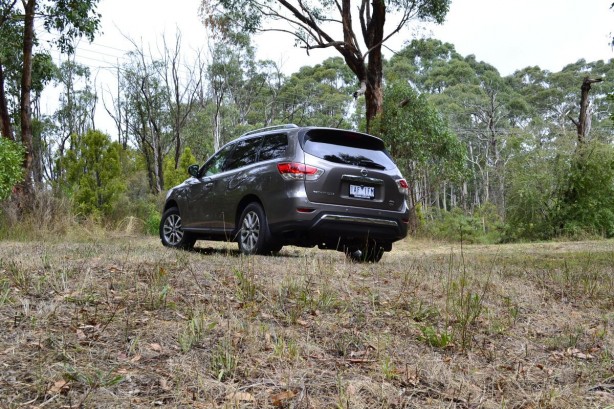 To match its softer persona, Nissan has given the Pathfinder a modern styling with softly flowing lines and a swept back stance. Its front fascia is dominated by the large chrome grille that sweeps back towards the outer edge of the headlights. The sharp creases on the bonnet which forms a soft power dome gives the car an aggressive face befitting of a 4×4.

In profile, the soft contour line that overflows from the bonnet crease continues along the length of the car and flares up at the rear wheel arch, giving it a bolder stance.

Its successful metamorphosis from the previous-generation’s truck-like design to a lofty contemporary wagon continues at the back, with an uncluttered tailgate and simple but purposeful taillights. What the new Pathfinder lacks though is a bit of bling, like LED taillights and front daytime running lights. 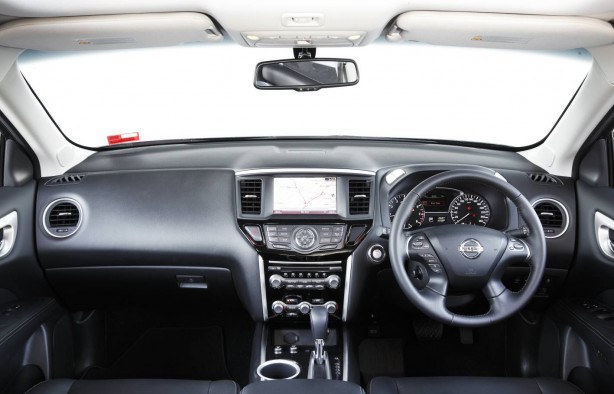 Inside, the interior is a little less distinctive. While the hard, smooth, textured surfaces of the upper dash will no doubt be mud and dirt friendly, Nissan’s choice of softer plastics for the door panels seems at odd with the dashboard.

Perched on the wide comfortable 8-way electrically operated driver’s seat, the driver is presented with a set of clear instruments, with a coloured multi-information display sandwiched in between. The driving position is faultless and visibility is mostly not an issue, except for the enormous wing mirrors that are big enough to hide a bus when coming out of junctions.

This translates to a voluminous interior for all three rows. Nissan has also made access to the third row easier, thanks to the innovative EZ Flex Seating System featuring Latch and Glide Technology. In plain English, all you need to do is simply lift a lever to slide the second row seats forward (up to 139.7mm back and forth), providing a wide berth to the third row. The third row is fixed quite low to the floor and like most such installations, is only really suited for vertically challenged adults or kids. 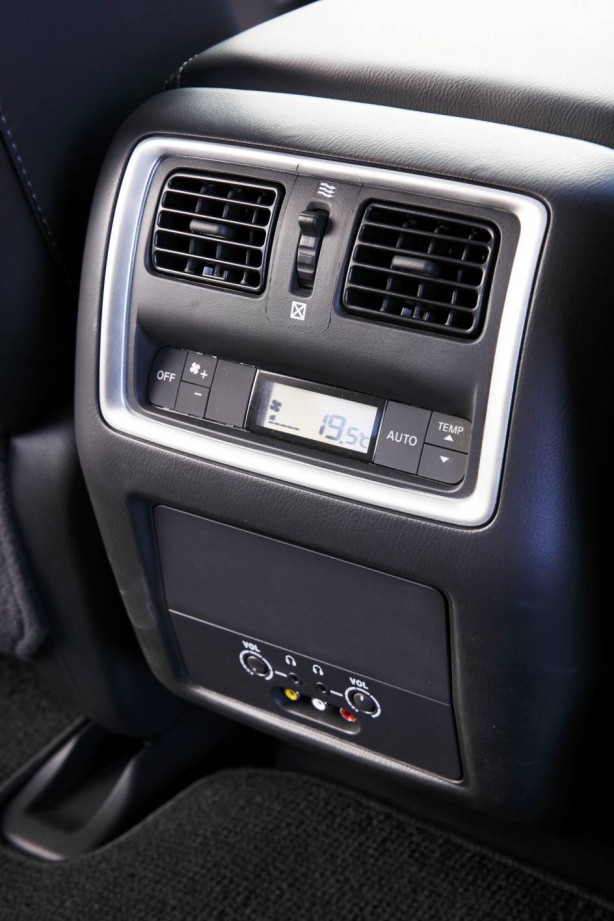 Both second and third row seats are reclinable as well for ultimate comfort. Additionally, they also get their own climate control air con and vents. Talk about being fancy!

There are also many storage areas in the cabin, ranging from the big wide door bins to an under-floor storage area. Despite its mammoth dimensions, the Pathfinder yields just 453 litres of luggage space with the second and third row seats up. However, this swells to 2,259 litres when they are folded flat.

Like a baboon’s bright red rear end, the first thing that grabs your attention when you shut the door and fire up the engine is the Pathfinder’s newfound level of refinement. The engine is barely audible at idle and there’s hardly a hint of vibration being transmitted into the cabin.

Once on the move, it is obvious a great amount of effort has been put into eliminating secondary vibrations and reducing road noise, with tyre roar from coarse chip bitumen well supressed. This is no doubt also helped by the more sophisticated independent strut front suspension and multi-link rears. 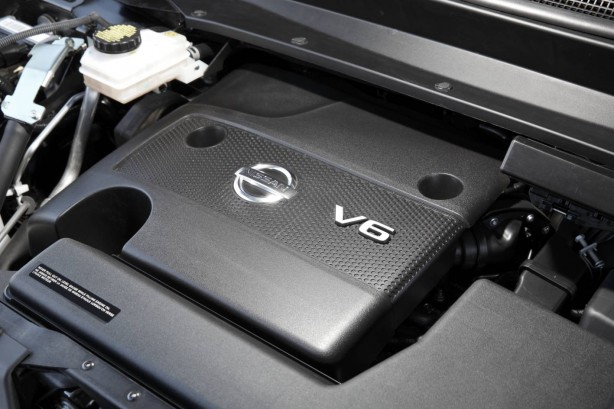 The familiar VQ35 3.5-litre V6 petrol engine from the 350Z and Maxima generates 190kW of power and 325Nm of torque. It is married to Nissan’s X-Tronic Continuously Variable Transmission (CVT) that transfers drive to either the front wheels, or all four wheels via the brand’s All Mode 4×4-i System, as tested here.

Controlled by a rotary dial that allows the driver to switch between three modes – 2WD (drives the front wheels for better economy), AUTO (system monitors all four wheels and distributes the ideal amount of torque between them) and LOCK (splits torque 50:50 between front and rear wheels at speeds below 40km/h), the new Pathfinder is predominantly front-wheel drive in most driving conditions. It is only during take off or when slip is detected that torque is send aft imperceptibly. 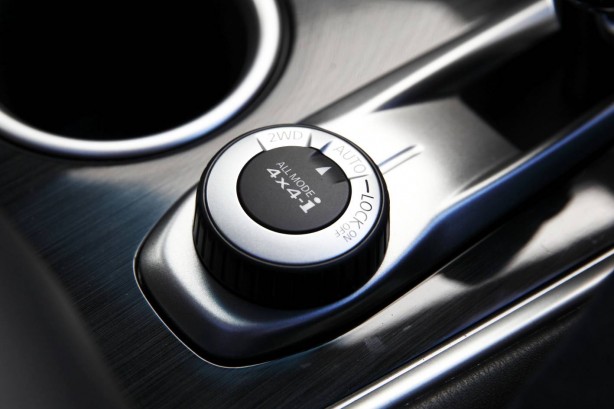 Like most car testers, I am no big fan of CVT transmissions, but when combined with a large petrol engine – as in this instance, the marriage works rather well. It has a wide spread of almost infinite ratios which improves acceleration at low speed and reduces engine rpm during freeway cruising. Sure, you still get a mild slipping clutch sensation but due to its muted engine, you hardly ever notice it half the time.

What mars the otherwise flawless combination is the CVT’s languid response at times, where the engine took its own sweet time to spool up before delivering power if it has been lazing along at low rpm.

Driven hard, it is easy to forget how heavy the Pathfinder is (at least 1,920kg in case you are wondering). Its tall body is well composed with little body roll and the 235/65 R18 Continental tyres grip well. As expected, mid corner bumps will unsettle the car but it swiftly recomposes itself with slight lift-off of the throttle.

While its steering is responsive and well-weighted, feel is sadly lacking, making accurate placement of the bulbous nose challenging in fast corners.

The car’s all round ventilated disc brakes also do a good job in bringing the big Nissan to a stop without much drama.

While there is a solid feel to the 2014 Pathfinder on the whole, we can’t help but question Nissan’s choice of hard shiny plastics for the dashboard that seems out of place with the softer materials used on the door trim.

Attention to detail also appears to be lacking somewhat, with only one (the driver’s) out of four power window switches on the driver’s door panel lit up at night. 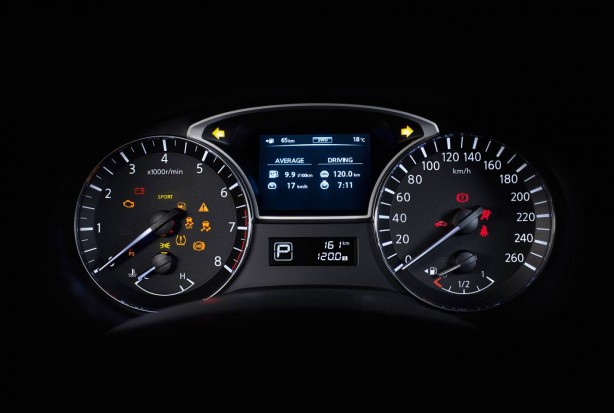 After a week of rigorous testing, the Pathfinder returned 11.8L/100km of unleaded fuel in the real world, against a claim of 10.2L/100km. This includes an equal mix of urban and freeway driving, as well as a minor amount of rough terrain tracking. With a 73 litre fuel tank, that equates to around 618km. 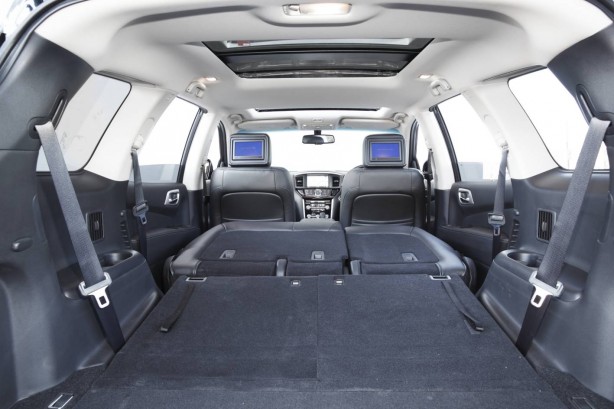 Nissan’s Bluetooth connectivity isn’t the most user friendly system we have come across, and can only be paired via voice commands, which even on the best examples is infuriating to use.

In its transformation from the previous ute-based four-wheel drive to an urban SUV, the 2014 Pathfinder has successfully pick up a new level of refinement and sophistication that the last model can only dream about.

Its car-like dynamics will no doubt present well to buyers looking for the versatility of a large SUV but not the weight and efficient penalties that are associated with ‘proper’ four-wheel drives. Starting from $39,990, it is also one of the best value large SUVs on the market today.