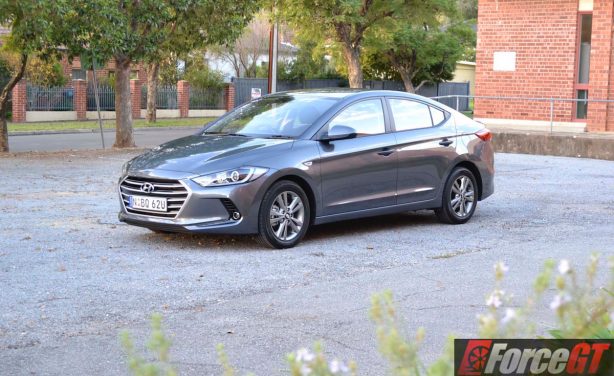 Australians’ taste in cars has changed dramatically since the new millennia. Fifteen years ago, our favourite mode of transport was large four-door sedans with no fewer than six cylinders.

Then came the invasion of the Sports Utility Vehicle or SUVs, which single handedly ended the dominants of our local heroes and changed the carscape forever.

What sealed their fate was the high oil prices a few years ago that saw the rise of small family cars and mid- to small-sized SUVs.

The Mazda3 and Toyota Corolla quickly became sales leaders but in the last two years, the Hyundai i30 became a force to be reckoned with, regularly stealing the top spot from the Japanese duo.

When it comes to small cars however, hatch rules. But this six-generation Hyundai Elantra might give you a reason to jump into a sedan instead.

Essentially a booted version of the i30 hatch, the 2016 model is built on an all-new platform shared with the next-generation i30 tipped to arrive mid to late next year.

If the Elantra is any indication, we can expect the all-new i30 hatch to be even sharper and more polished, potentially challenging class best.

But enough of the hatches for now.

For 2016, Hyundai has simplified the Elantra’s lineup with just two variants – Active and Elite. 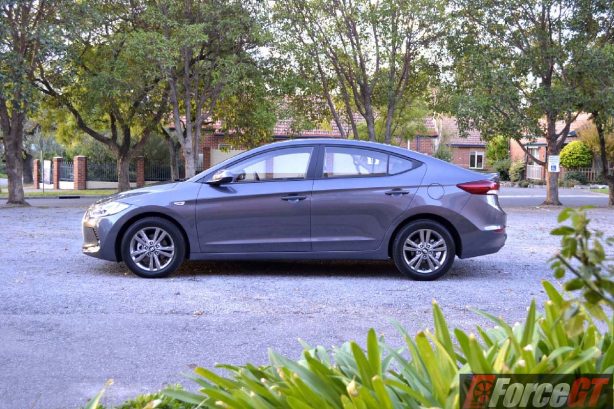 Hyundai really pushed the envelop on the last-generation Elantra, which heralded a sleek fastback design. The 2016 model is a refinement on that styling. You still get the familiar outline, but all the lines are tighter and the creases deeper.

Its new hexagonal grille – in silver metallic on the entry-level Active tested here, and chromed on the Elite – is flanked by a pair of slimline projector-beam headlights with integrated LED daytime running lights.

At the back, the taillights get posh-looking three-pod light signature first seen on the brand’s premium Genesis sedan, while the steeply raked rear windscreen flows into a pronounced lip on the boot lid.

The new model is also 20mm longer, 25mm wider and 5mm taller than its predecessor. 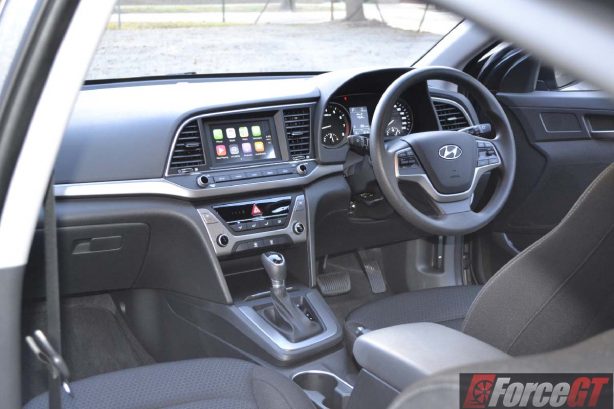 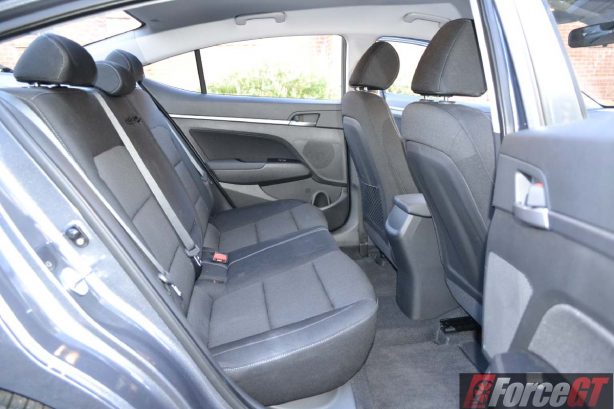 Inside, there’s 7mm and 12mm more shoulder room front and back, respectively. And despite the sloping roofline, rear headroom is up by 4mm and there is substantially more legroom at the back as well, up by 59mm.

NVH (noise, vibration and harshness) has improved even further, thanks to the Elantra’s front suspension, which brings a new sub-frame with optimised geometry, new bushings and larger bushes on the lower control arm.

More substantial changes have been made to the car’s torsion-beam axle rear suspension setup. While the outgoing Elantra’s dampers were mounted diagonally, the new model features upright, longer dampers and repositioned coil springs.

Coupled with the 16-inch wheels on our Active test car, the ride is pillowy plush while the cabin is peacefully serene at almost any speeds.

The only downside to having the vertically mounted dampers is a smaller boot space, which is down 27 litres to 458 litres, although you get a full sized alloy spare wheel instead of a space saver. 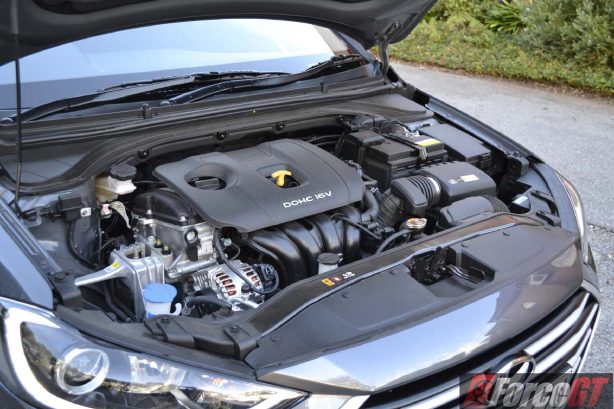 Importantly, peak torque now arrives 700rpm sooner than before, improving the small sedan’s driveability. The engine is mated with either a 6-speed manual, or a 6-speed automatic, as in our test car.

While the transmission dishes up ratios relatively quickly for a torque converter auto, it is slow to kick down when driven enthusiastically. A lack of steering wheel-mounted shift paddles and manual gear controls that are the wrong way around (push up to shift up and pull down to shift down) add to the frustration further.

The new Elantra has undergone extensive local suspension tuning to imbue a local flavour to its handling and we are glad to report the effort has been worthwhile.

The result is confident and composed handling, with excellent grip from the 205/55R16 tyres. The car feels compliant with well-sorted damping and good brake feel.

What lets it down is the inconsistently weighted steering that is slightly numb off centre. 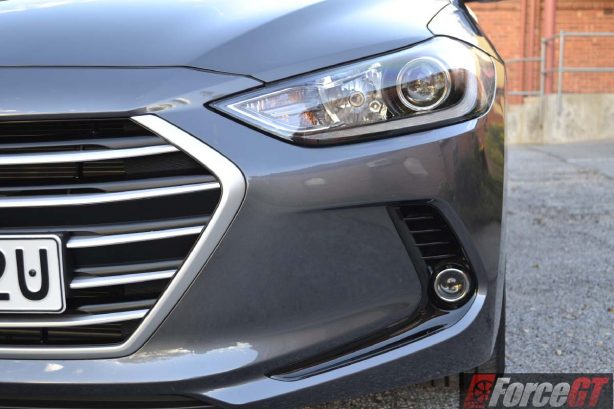 What impresses most about the Elantra is the high quality feel of the car. Everything feels taut, from the tight panel gaps to the hefty doors. Even the boot lid shut with a nice solid thunk.

Inside, the dashboard’s top surfaces have soft-touch plastics and all controls come with a substantial feel.

It’s a shame then that Hyundai decides to equip the Active with a low-rent plastic steering wheel. 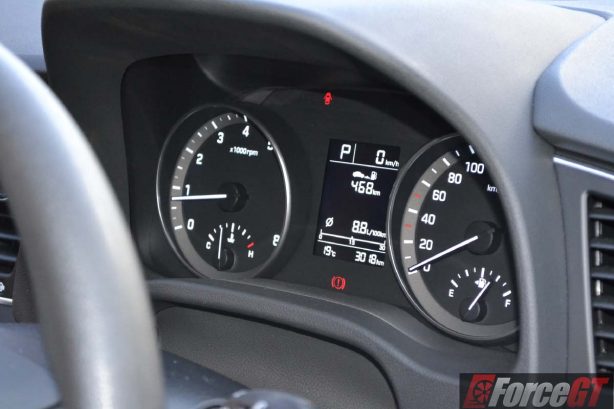 With a 50-litre fuel tank, that means a cruising range of approximately 581km. 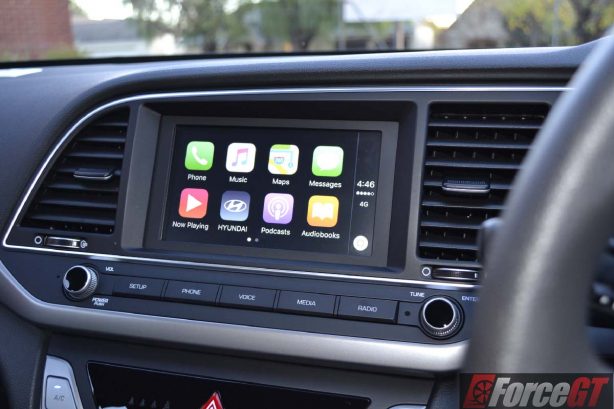 While rear vision in the Elantra is good, it is backed up by rear parking sensors and a reversing camera.

Its 7-inch touchscreen audio system with 6 speakers sounds decent and comes with MP3 capability, AUX/USB input, Bluetooth and Apple CarPlay, although it misses out on built-in sat-nav.

Neither model gets front seat lumbar support and life saving autonomous emergency braking, which is an oversight. We also find the digital speedometer to be too small.

Wrapped underneath the all-new 2016 Hyundai Elantra’s balanced proportions and handsome sheet metal is a delightfully capable and well-sorted small sedan.

With a well-appointed interior and excellent built quality, backed up by Hyundai’s generous 5-year warranty, the Elantra is now good enough to challenge the dominance of the Mazda3 and Toyota Corolla sedan.