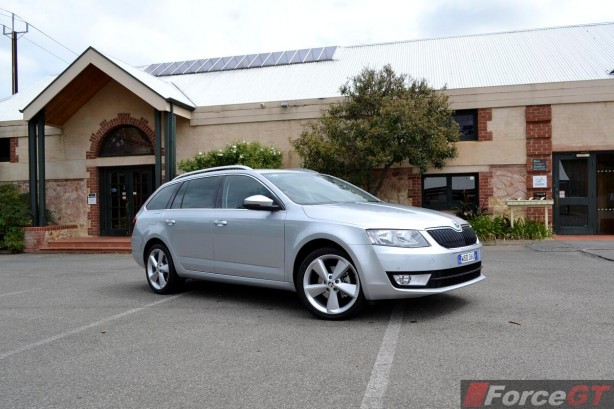 Like me, most of you are likely to see Skoda through a pair tainted lens, a legacy of the brand’s humble Eastern Bloc origin. Think Skoda 105, 120 and 125 – a trio of painfully basic models that were produced from 1976 to 1990. Loved by Hollywood for car-chasing scenes where most of them were driven by baddies and sacrificed in spectacular crashes.

In the past two decades though, Skoda’s triumphant rise from its underprivileged origin to a world-class auto manufacturer is hard to ignore. Wholly owned by the mighty Volkswagen Group since 1991, Skoda’s are no longer forgettable steel boxes on scrawny wheels. Built on hi-tech German engineered architectures, the Czech brand has churned out close to a million vehicles globally, selling in more than 100 markets worldwide.

One of its most successful models is the car you see here, the Skoda Octavia. Now in its third generation, it is one of the many models that are based on Volkswagen Group’s highly acclaimed modular MQB platform, which also underpins the Volkswagen Golf and Audi A3.

Significantly changed for 2014, the Octavia is not only the best looking so far, it has also grown considerably not only to maximise its own potential, but also to make room for a new comer – the smaller Skoda Rapid, which is slated to arrive later this year.

It is noticeably bigger than the Volkswagen Golf and only slightly smaller than a Passat, yet costing roughly the same as the former. Yet in Australia, Skoda still sells significantly less Octavia’s than the popular Golf.

So, can the all-new Octavia shake its dowdy image and inject some much-needed sex appeal for Skoda? Let’s find out. 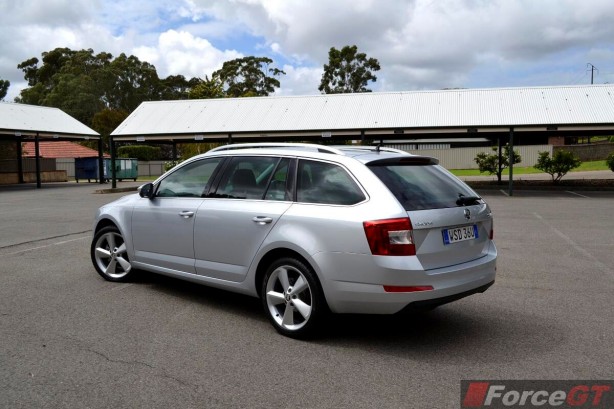 Unlike its predecessors, the 2014 Skoda Octavia is well proportioned and elegant. Designed by a team lead by the brand’s chief crayon welder, Jozef Kaba?, the car’s front fascia looks decidedly classier, with the unmistakable Skoda grille flanked by a pair of sharper headlights.

The new Skoda logo now resides prominently on the bonnet – the “premium location,” as designers call it. 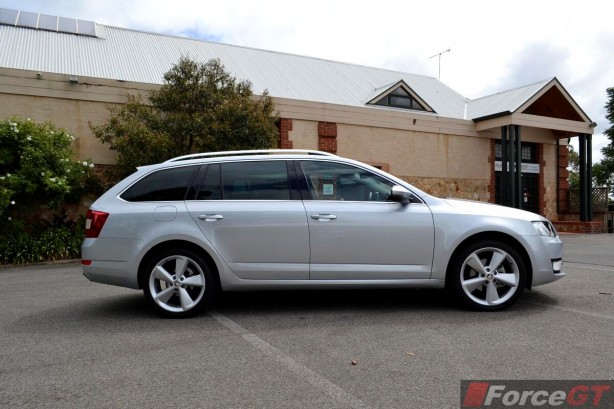 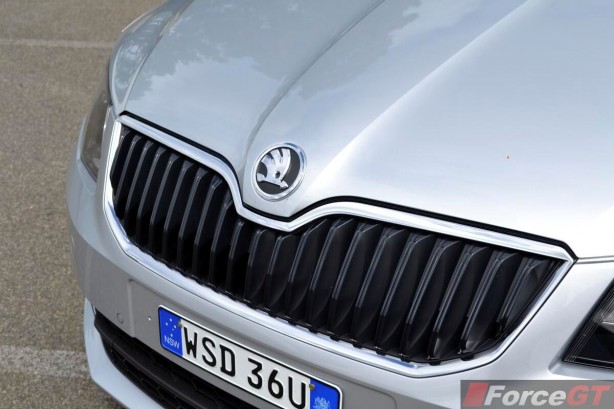 In profile, the car appears more dynamic, too, especially in the better looking wagon. This is thanks to the combination of a longer wheelbase (108mm longer than its predecessor) and shorter front overhang (29mm less). It is further accentuated with the sharp “Tornado” line that visually stretches the car, and the upswept window line in the rear doors.

At the back, the taillights graphic is typical of Skoda with its distinctive double C-shaped lighting strips. They are connected to the boot lid via two triangles on either side of boot lid.

Inside, while the dashboard design is fresh and much better executed than the old car’s, it isn’t the last word in style. Volkswagen owners will also feel right at home, with most switchgears coming straight from the German’s vast part bins. At night, the instruments are illuminated in Skoda’s trademark green backlighting – something which I’m not a fan of.

On a brighter note, the Octavia’s extended wheelbase translates into dramatic enhancement in rear legroom. Like the large and comfortable driver’s and front passenger seats, the rear seats are similarly accommodating, even for oversized occupants.

The rear seatbacks also fold in front of an already sizable boot. With seatbacks up, luggage space is a generous 588 litres (568 litres for sedan). Folded, it expands to a voluminous 1,718 litres (1,558 litres for sedan). The Octavia’s practicality continues to shine with a large opening tailgate that makes loading and unloading a breeze. 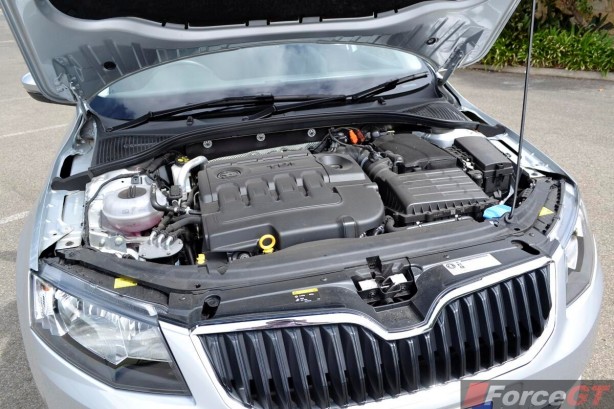 Underneath the elegant sheet metal, the Skoda Octavia features a range of familiar Volkswagen Group powerplants and drivetrains.

A 6-speed manual is only available on the 1.4TSI Ambition and Ambition Plus, while a 6-speed DSG is reserved exclusively for the 110TDI. The rest of the models get a 7-speed DSG.

All deliver adequate performance and are capable of achieving a 0-100km/h dash of less than 9.0 seconds. The driving sensation of the 110TDI tested here is not dissimilar to that of the new Golf 7 either, it steers with ease and handles corners with poise.

Its steering is well weighted and accurate but at 2.7 turns lock to lock, it isn’t the fastest around. However, it turns in with eagerness, thanks to the Electronic Differential Lock which brakes the inside front wheel of a bend. 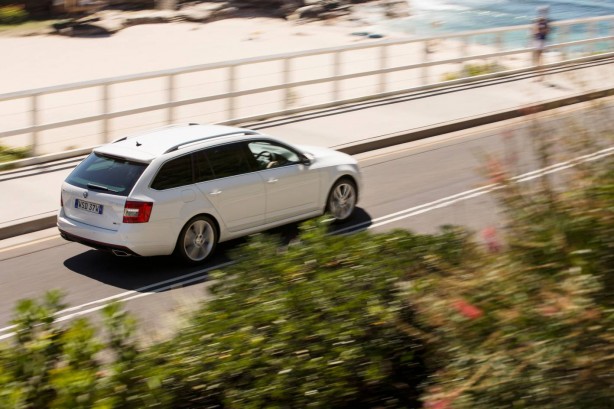 Owners will no doubt welcome the Octavia’s great refinement, from both the engine and the 7-speed DSG, with open arms.

Gone were the days of much complaint low speed jerkiness from the twin-clutch gearbox. The unit is now one of the best we have ever come across.

While its more salubrious cousin gets the more sophisticated multi-link rear suspension in Australia, the Octavia gets the cheaper and simpler torsion beam set up (except for the 132TSI which gets multi-link). The result is a slightly noisier cabin that is still better than most in its class.

Nevertheless, there is hardly any serious cabin intrusion from a motorway expansion joint or jolts over a rough surface. 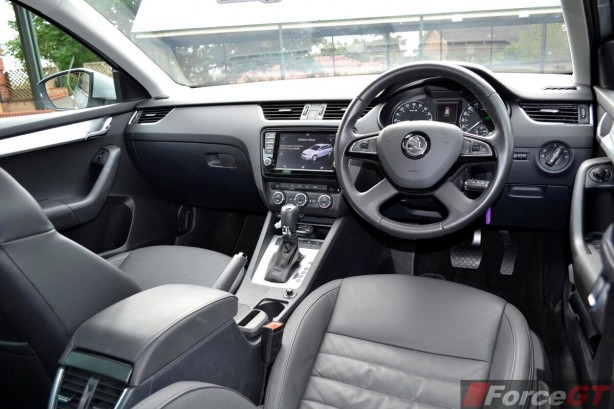 While it wears the less coveted green finned arrow badge, the Skoda Octavia is every bit as well made as its German cousin.

Its platform forms the basis of many Volkswagen Group cars, and all of its powerplant and drivetrain are tried and tested.

There are soft-touch plastics on the dashboard and everything you feel and touch has good tactile sensation. 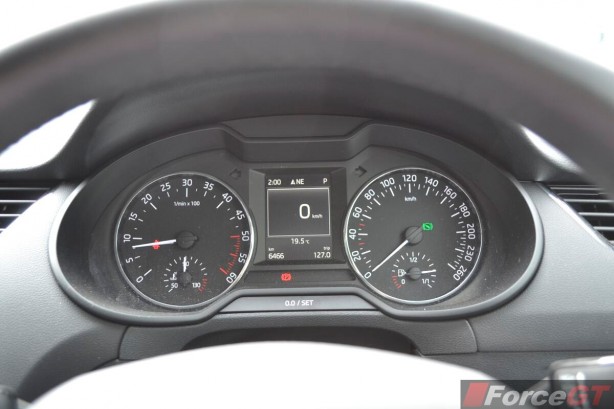 Our weeklong test average sees the Octavia 110TDI returned 6.9L/100km of diesel in the real world on an equal split of city and highway driving. Curiously, only the diesel engines feature stop-start and brake energy regeneration technology.

The new Octavia also comes with Capped Price Service Programme that stretches a total of six years or 90,000km, whichever comes first – one of the longest coverage on the market. 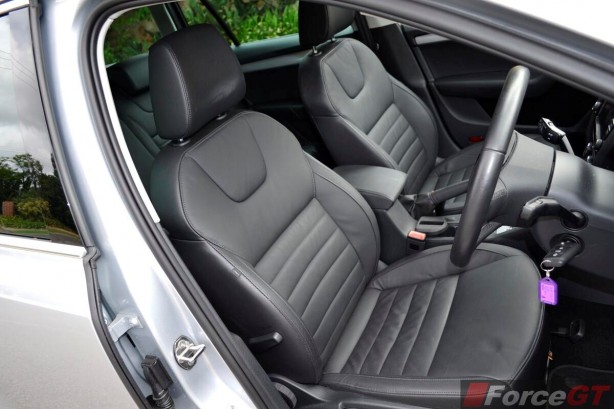 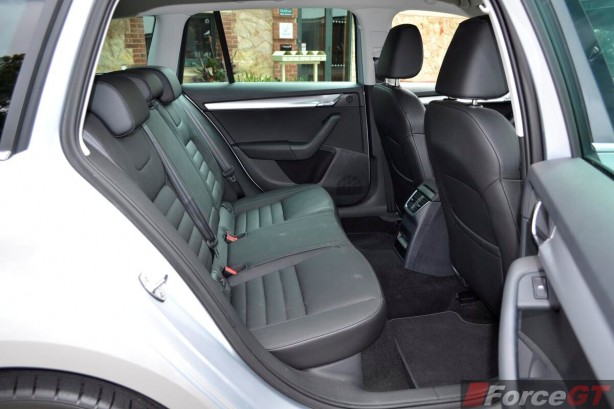 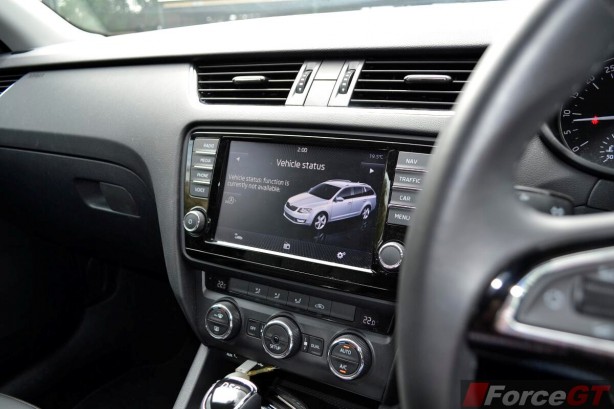 Three option packs are available – one for each model.

The Travel Pack at $1,300 is available for the Octavia Ambition. It is consist of rear parking sensors, cruise control, an additional 4 loudspeakers, front centre armrest and Denom 17-inch alloy wheels.

The 2014 Skoda Octavia is much better looking than before. It is also strong on practicality and refinement, while material, quality and equipment are as good as anything at the price or even above.

Couple with a range of fine and efficient engines and adequate dynamics, the Octavia’s overall package is a sensible and appealing one.

It is about time that we all remove our tainted lens and see the rosy side of Skoda.