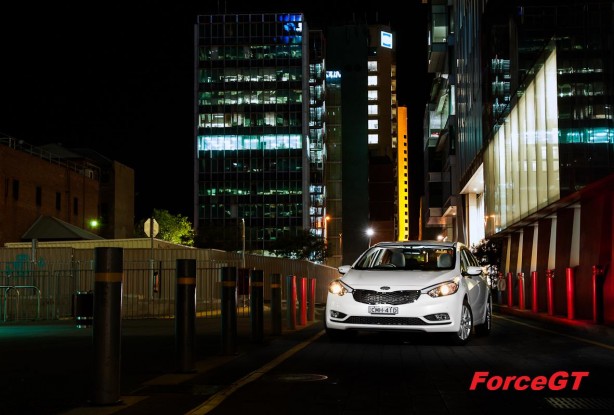 The Kia Cerato is one of the Korean brand’s most successful models, selling in excess of 2.5 million worldwide since its debut in 2004. Locally, although the Kia Cerato rarely appears on the top ten sales podium, it is a significant model for the company in the booming C-segment dominated by the Mazda3 and Toyota Corolla.

The third-generation 2013 Kia Cerato Sedan arrives with a raft of upgraded powertrains and promises of better performance and efficiency, all wrapped in a bigger yet lighter and sexier body.

If the previous generation Kia Cerato was focused on design, quality and value, Kia Australia said it has raised the bar again with the latest generation by adding emotional appeal to the mix.

So does Kia’s latest offering have what it takes to play the compact car Big Leagues? Let’s find out….

If there’s one thing Kia has gotten right in the past few years, it’s styling. Penned by Kia’s American Design Centre in Irvine, California, under the watchful eyes of Peter Schreyer and headed by Kia Motors America’s Chief Designer, Tom Kearns, the sleek third –generation Cerato portray a dynamic muscularity that is said to provoke emotional response. 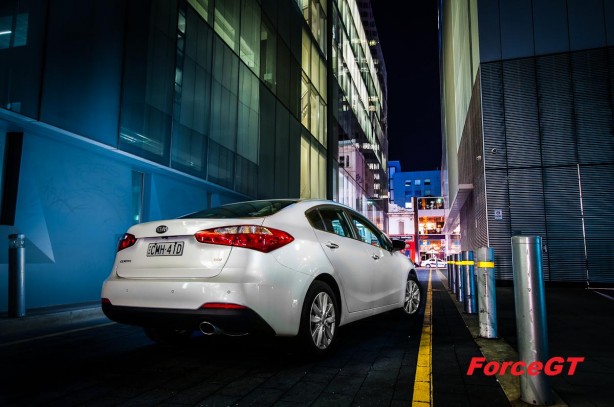 With a cab-forward styling, rising beltline and coupé-like roofline, the all-new Cerato cuts an elegant, yet sporty profile. Kia’s designers have also moved the A-pillar forwards and the C-pillar backwards to allow the addition of front and rear quarter windows which enhance the car’s sense of spaciousness and improve visibility.

Compared to its predecessor, the new Cerato is 30mm longer, 25mm lower and 5mm wider. Its wheelbase has been extended by 50mm and is now as long as the Kia Sorento SUV. Front and rear overhangs are 15mm and 5mm shorter respectively, yet boot space has increased by 6 litres to 421 litres, and augmented by 60:40 split-folding rear seat.

Because the cabin floor is lower and the seat ‘hip-points’ have been dropped by 26mm front and 20mm rear, occupants will find increased front headroom and legroom. 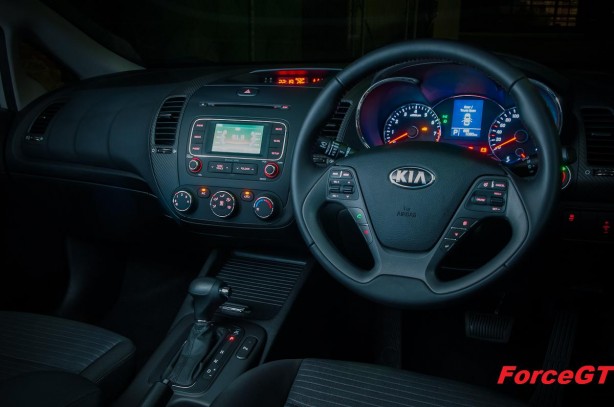 The driver-focused cockpit shows great attention to detail, from the soft leather-bound steering to the ripple effect echoing across the passenger side dashboard. Driver comfort is further enhanced with organ-type accelerator pedal.

Thankfully, the Cerato’s dash is devoid of cheap silver painted plastic trim, preferring instead the more premium look of carbon-look trim on the vertical band each side of the centre stack.

There are three trim levels and two engines in the latest Kia Cerato range. The car supplied for the test is the mid-range Si with a 2.0-litre four-cylinder direct-injected petrol that also powers the range topping SLi (which we will be testing in the coming months).

It delivers 129kW @ 6,500rpm and 209Nm @ 4,700rpm. The naturally aspirated powerplant is one of the more energetic we have come across and is matched with a slick-shifting 6-speed automatic transmission. 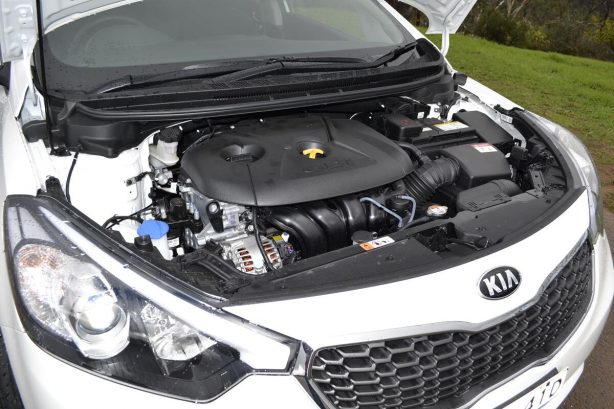 Together with a chassis that has been specially tuned for local conditions, the 2013 Cerato’s dynamics are surprisingly European in flavour. There is a good balance between crisp handling and ride comfort.

Compared to the Nissan Pulsar we tested recently, the Cerato’s handling is much more polished and offers plenty of grip. It also feels planted around corners with very little body-roll, while the electric steering is refreshingly meaty and precise for a Korean brand.

Kia’s FlexSteer system is standard across the range and offers drivers three settings – Normal, Sport and Comfort. They vary the degree of assistance but is more of a gimmick rather than offer any real-world feedback. 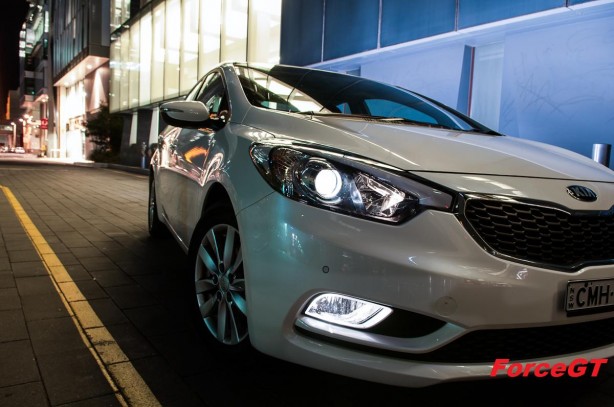 Kia has all but shed its cheap and nasty approach. We now think of it as something of a style leader with quality to match.

The Cerato’s torsional rigidity has been increase by 37% over the previous model, bringing improved refinement and NVH (noise, vibration and harshness) which are evident during the test.

Although not crashed tested by Australian NCAP, the new Kia Cerato is expected to achieve a maximum 5-star rating.

The new Kia Cerato is, on average, 50kg lighter than the superseded model. Attention to surface detailing and underbody airflow has also contributed to a more slippery body, with aerodynamic drag reduced from 0.29 to 0.27.

Together, they yield a claimed average fuel consumption of 7.4L/100km. However, in the real world, the tested figure is a still a not unreasonable 8.6L/100km, with an equal split of city and freeway driving. 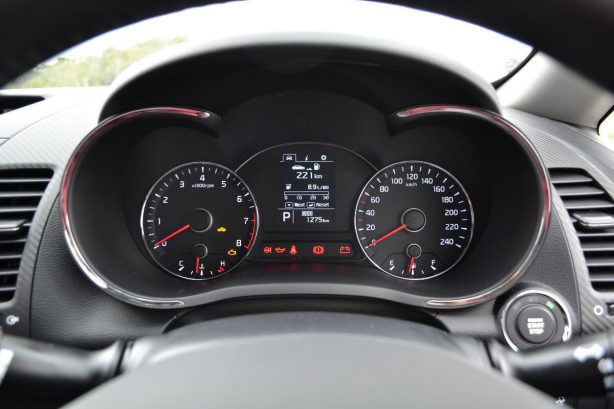 As we have come to expect from Kia, the Cerato Si is loaded with a bevy of equipment as standard. It gets 16-inch alloy wheels wrapped in 205/55 tyres, full-size alloy spare, rear view camera with parking guidelines, electric door mirror with auto folding function, smart key with push button start, 4.3-inch colour touch screen audio screen and rear air vents.

However, the entry and mid-range models do miss out on the automatic climate control aircon and LED daytime running light on the SLi.

So, is the 2013 Kia Cerato sedan a credible alternative to the mainstream small cars? Most definitely. Not only is it more handsome and better equipped, it also drives well and is solidly put together.

Its 2.0-litre GDI engine is one of the most powerful in its class and sounds good when given the prod too.

It’s another winner from an ambitious brand with a humble beginning.