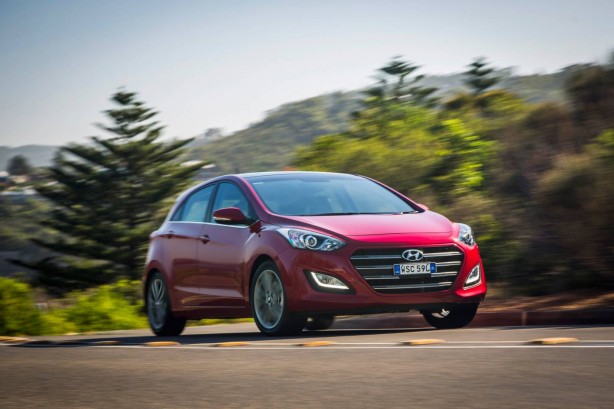 The Hyundai i30 is the showroom star of the fast growing Korean brand. Developed to take on segment favourites such as the Toyota Corolla, Mazda3 and Volkswagen Golf, the i30 has built up a loyal following in the two generations it’s been on sale.

In June, it was the best-selling small car in Australia, with 5521 sales – its best ever result. So far this year, it is the third most popular small car behind the ever-popular Toyota Corolla, and dashing Mazda3.

The sales results are not only testament to the i30’s value and quality, but also a tick of approval for Hyundai’s ever improving product range. 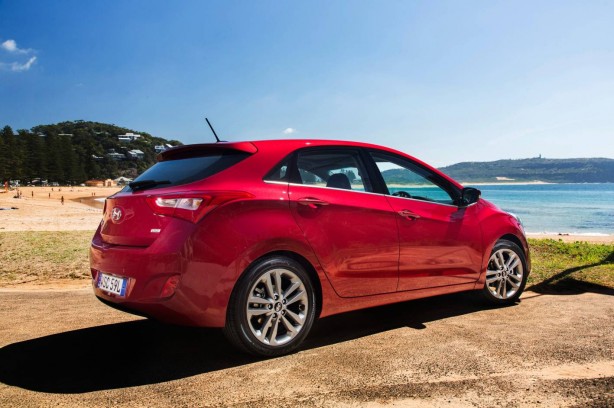 To keep things fresh, Hyundai has given the 2015 i30 a once over, with enhanced styling, improved efficiency, more features and a new 7-speed twin clutch transmission.

The range has also been revised and now consists of five variants, with the $20,990 107kW/175Nm 1.8-litre MPi petrol Active kicking off the range, followed by the new ActiveX at $22,090 with the same powerplant. 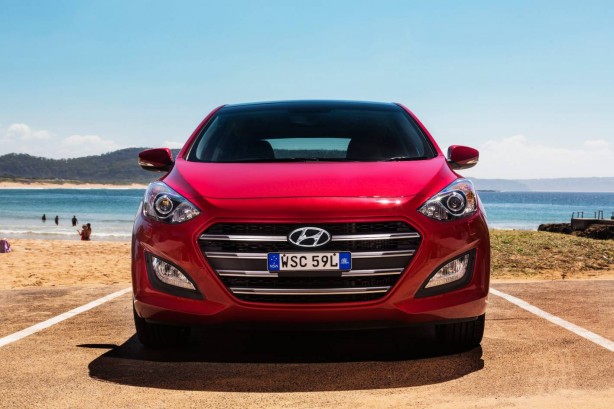 All are paired with a standard 6-speed manual transmission, with a 6-speed torque converter auto a $2,300 extra.

Sitting at the top of the range is the $34,490 Premium, as tested here. It is motivated by a 100kW/300Nm 1.6-litre common-rail direct-injected diesel engine mated exclusively with Hyundai’s new 7-speed dual-clutch transmission. 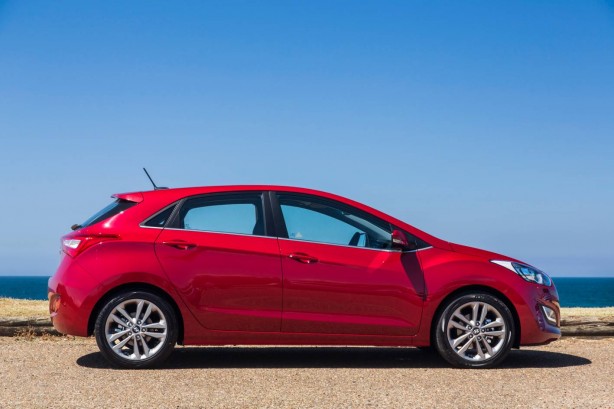 Inside, the i30 Series II is the first Hyundai vehicle locally to be offered with Pandora internet radio capability when tethered with a compatible iOS or Android smartphone. 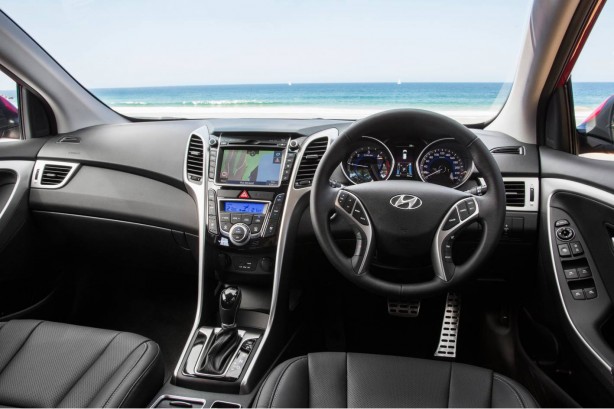 Users interact with a 5-inch touchscreen system on the Active and ActiveX, while the more expensive variants gets a sizeable 7-inch touchscreen with satellite navigation. In a sign of time, the CD-payer has been dropped for the two entry-level models.

The impressive list of standard equipment continues in our i30 Premium (and SR Premium) that now adds front-seat ventilation with three-way electric adjustment and auto up and down windows all around.

Like its predecessor, the i30 Series II is a comfortable car to be in, with good a ride quality and supportive seats. Its refinement is good, too, with road and wind noise kept well at bay. 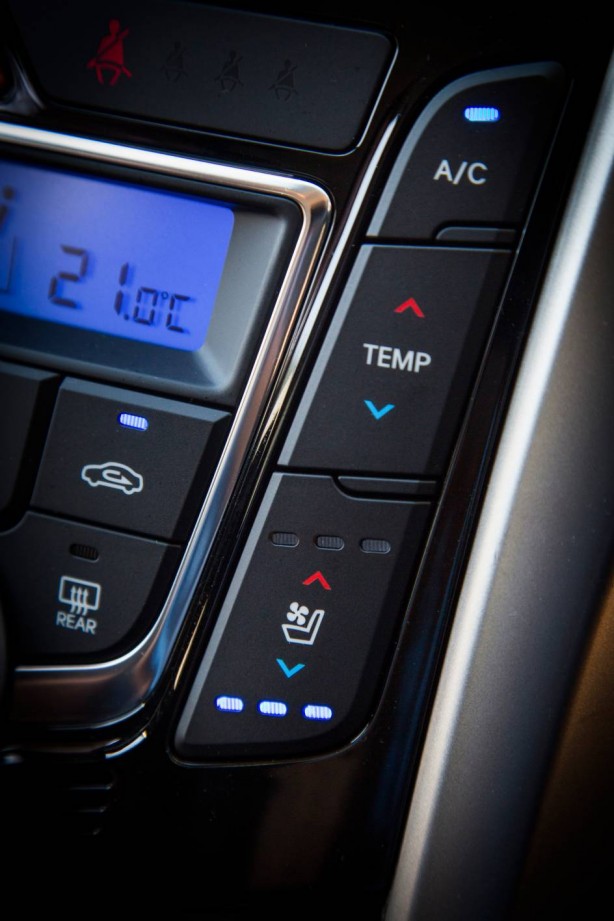 Around the corners, the Korean hatch is a tidy handler, with the Australian-tuned suspension delivering good body control. It isn’t as sharp as class benchmarks, such as the Mazda3 or Volkswagen Golf, with minor body roll on faster corners, but most i30 buyers would not notice the difference.

It’s steering is well weighted and fluid, but is relatively vague like most in its class.

The biggest change to the Series II i30 though, is the introduction of a seven-speed dual-clutch transmission to the range. Curiously however, it is only offered with the carried over 1.6-litre four-cylinder turbo diesel engine, where it is a $2,000 option. 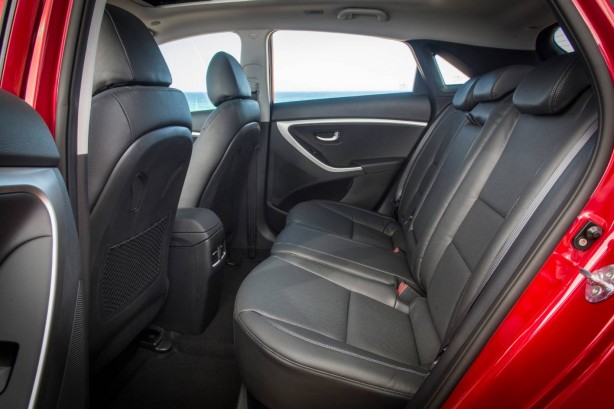 Unlike Volkswagen Group’s rapid fire DSG, Hyundai’s first dual-clutch transmission is slower in dishing out its cogs in comparison. It is also slow to kick down, which when coupled with a slight turbo lag from the engine, giving the whole drivetrain a slightly dim witted demeanor at lower speeds.

The power output of the 1.6 CRDi diesel engine has been increased to 100kW, up a hardly noticeable 4kW compared to the pre-facelift model. Interestingly though, the 7-speed dual clutch equipped model gets 40Nm more torque at 300Nm, against the 6-speed manual, which is pegged at 260Nm. Naturally, acceleration in the twin-clutch is solid, giving you a hot-hatch like shove in the back if you get enthusiastic with the right pedal.

It is also rather frugal, returning a respectable 6.3L/100km after our weeklong test on a range of urban and freeway commute.

The i30 was a good little car when it hit the market three years ago. The 2015 i30 Series II update brings better equipment, a slightly sharper – albeit still not the most engaging – dynamics, and Hyundai’s first dual-clutch transmission.

It is a great first effort, but the gearbox needs more work in its mapping for a better response.