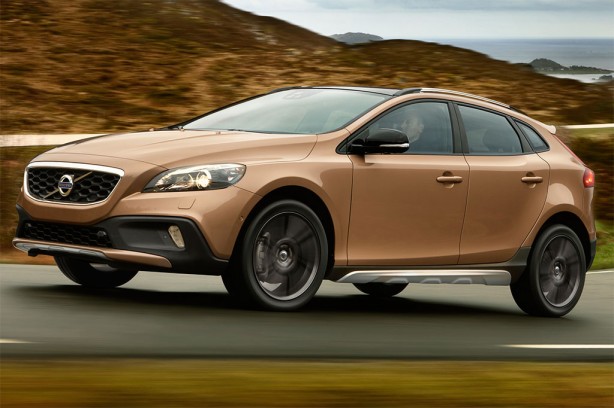 Volvo has lift the cover off the new V40 Cross Country. The Swedish carmaker’s latest crossover is based on the V40 Hatch with a raised body and an all-wheel drive system added.

The AWD system will be paired with a variety of engines. Three turbo diesel engines ranging from 1.6 litre to 2.0 litre will be offered whilst petrol variants will come in a five cylinder 1.6 litre or 2.5 litre. Three transmission options will be available: a six-speed manual, a six-speed automatic and a six-speed twin clutch sequential manual. 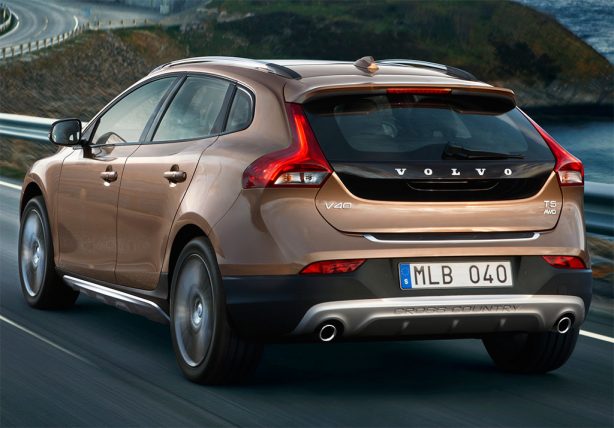 The sleek looking V40 Cross Country is set to go head to head with its German rivals, particularly the BMW X1. Check out the full press release after the jump.

Volvo Car Corporation paved the way for a totally new segment with the V70 Cross Country when launched in 1997. Now, 15 years later, the all-new Volvo V40 Cross Country brings the unique blend of capable ruggedness and expressive elegance up to a new altitude by establishing the Cross Country name in the premium C-segment.

“The new V40 Cross Country is built on the heritage that started with the V70 Cross Country back in 1997. It is designed for those who want a sense of adventure in their everyday life,” says Lex Kerssemakers, Senior Vice President Product Strategy & Vehicle Line Management at Volvo Car Corporation.

Start/Stop is fitted as standard across the range,together with Bluetooth hands-free communication and wireless music playing, plus City Safety auto-braking technology and the V40’s world-first pedestrian airbag. The V40 Cross Country is also the only car in its class to be available with Pedestrian Detection technology.

The V40 Cross Country is the third variant of the V40 to be revealed – it has a more rugged style than the standard V40, and is also distinct to the sports styling of the R-Design model. Appealing to customers that want a more rugged look, it features a number of unique details:

“The V40 Cross Country retains its V40 stylishness by integrating the ruggedness in the design with meticulous attention to detail. It has an extrovert, expressive character that promises the open-minded adventurer a great time,” says Simon Lamarre, exterior design manager for the V40 Cross Country.

The D2 version of the V40 Cross Country comes with CO2 emissions at a class-leading 99 g/km – so there’s no road tax to pay – while fuel costs are also kept low with up to 74 mpg fuel economy. The 1.6-litre diesel engine has 115 hp and 285 Nm of torque, including 15Nm over-boost. The D2 engine is combined with a six-speed manual gearbox and start/stop function.

The five-cylinder 2.0-litre D4 turbo-diesel has been optimised for fuel-efficient driving pleasure. It delivers 177 hp and has torque of 400 Nm across a wide rpm range. Acceleration from 0-60 mph takes 7.9 seconds with the automatic gearbox (8.2 sec with manual). Fuel consumption and CO2 emissions are 64 mpg (117 g/km) with a manual gearbox and 54 mpg (137 g/km) with the automatic (EU Combined).

Both turbo-diesels are available with a six-speed automatic transmission or six-speed manual gearbox.

The V40 Cross Country features class-leading driving dynamics with All-Wheel-Drive as standard on the T5 petrol turbo to enhance the all-road, all-weather, capability.

The five-cylinder 2.5-litre T5 engine has a power output of 254 hp and 400 Nm of torque, including 40 Nm over-boost delivered during acceleration. It comes with automatic transmission and acceleration from 0-60 mph takes 6.0 seconds. Fuel consumption is 34 mpg (EU Combined).

There is also the T4 petrol, a 1.6-litre GTDi engine with 180 horsepower and maximum torque of 270 Nm, including 30 Nm over-boost. Fuel consumption is 51 mpg. This corresponds to CO2 emissions of 129 g/km.

Start/Stop on all versions

All petrol and diesel engine versions have start/stop and braking energy regeneration, no matter whether they are fitted with a manual or automatic gearbox.

Versatility for life’s little adventures
The two-piece, 40/60 split, rear seat backrest can be easily folded, and the car can be equipped with a versatile “extra” floor in the load compartment that provides a concealed storage area and also creates several other useful possibilities:

Fold it up and get a grocery holder
Fold it away and get best luggage volume
Flat floor for loading long items
Flip it over to protect items and maximize cargo volume
The front passenger seat can also be folded forward to create even more space for extra long objects.

The accessory range includes a Parcel Shelf Net that keeps smaller items secure and in order, as well as a Load Organiser that includes a load compartment divider, a load belt and two floor rails.

Below the armrest is a storage compartment suitable for CDs and other small items, whilst also housing the connector for a USB/iPod. The armrest itself can be adjusted to provide extra support for the driver. Two cup-holders and a 12V power outlet are integrated in the console in front of the armrest.

The glove compartment includes space for two drinks cans or bottles that are kept cool with cold air from the Electronic Climate Control system.

Another smart detail for the keen winter adventurer is the specially designed, drained storage unit for an ice scraper in both front door panels.

The interior lighting is designed to give a “theatre lighting” feel. LED lamps are used to light up strategic areas. The driver can enjoy a red-to-blue setting that adapts the light to the interior temperature, or choose between another seven mood themes. The reading lights front and rear can be dimmed.

The V40 Cross Country can also be specified with a stylish TFT digital instrument cluster, which allows the driver to select one of three modes – Elegance, Performance or Eco – depending on what information they prefer to see while driving.

Keep in touch via mobile application

There is also a mobile application that makes sure that the driver can stay in touch with the parked car via an iPhone or Android smart phone. An extension of Volvo On Call, the app opens up a range of connectivity possibilities, is free to download via the iPhone and Android app stores and is designed to offer the owner an intuitive, easy-to-use relationship with the car from a distance. The app allows users to view information about their car on their mobile phone, so a driver can check fuel levels before starting their journey for example, or get information on wiper fluid or oil levels, or check whether the car has been locked.

Focus on Europe and China

Volvo Car Corporation expects to sell 17,000 units per year of the new Volvo V40 Cross Country. Around 50 per cent of the total volume will go to European customers and around 30 percent to Chinese buyers. UK sales are expected to be between 1200-1500 in the first full year.

The V40 Cross Country will be built alongside the standard V40 and R-Design models at Volvo Car Corporation’s production plant in Ghent, Belgium. Prices will be announced and orders taken in early October, with production starting in November. Customer deliveries are expected to start during January 2013.

Note:Except for unique details mentioned in this press release, the new V40 Cross Country is available with the same features as the standard version of the all-new Volvo V40. Detailed information is included in the previous Volvo V40 press releases.