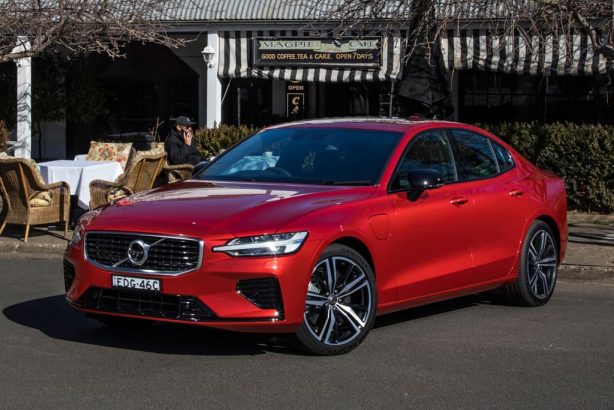 Volvo has enjoyed tremendous growth in the past few years thanks to a rejuvenated line up that started with the XC90. Its cars are now far sexier, more high-tech and crucially, much better to drive than ever before.

In Australia, those numbers are mainly contributed by its SUV range after the company pulled the S90 sedan from the market last year due to lackluster sales. Now Volvo wants to re-enter the passenger car segment with its new S60 sedan.

Volvo admits it doesn’t have high expectation and is forecasting 400 annual sales for the four-tier line-up. However, Volvo Car Australia Sales Manager, Stephen Connor is confident the S60 will spice up a “dull” segment.

While we might not completely agree with that, there’s no doubt the new-generation S60 is a handsome looking car.

So can the new S60 re-establish Volvo in the passenger car segment? We think it stands a very good chance. 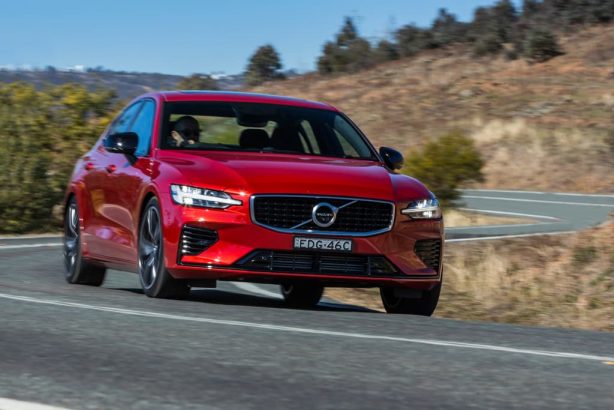 The S60 is the latest product to sit on Volvo’s much-lauded Scalable Product Architecture (SPA) that also underpins the XC60, XC90 and S90.

To keep the line-up simple in Australia, the S60 is offered in three trim levels – Momentum, Inscription and R-Design, and two drivetrains – T5 and T8.

All wheel drive is standard across the board, as is an eight-speed automatic transmission.

The T5’s 2.0-litre turbocharged four-cylinder petrol engine comes in two states of tune – 187kW/350Nm in the Momentum and Inscription, and 192kW/400Nm in the R-Design courtesy of the Polestar optimisation tune.

Meanwhile, the T8 is powered by a plug-in hybrid 2.0-litre supercharged and turbocharged four-cylinder petrol engine married to a permanent magnet synchronous electric motor on the rear axle. Similar to the XC90 T8, a second electric motor up front acts as a starter-generator as well as providing extra boost to the engine.

The total combined outputs are 300kW/640Nm, and being a R-Design means it comes with the Polestar optimisation software which bumps the output to a potent 311kW/670Nm. This enables the T8 to hit 100km/h from a standstill in 4.3 seconds – 2.0 seconds faster than the T5 R-Design and 2.1 seconds speedier than the T5 Momentum and Inscription. 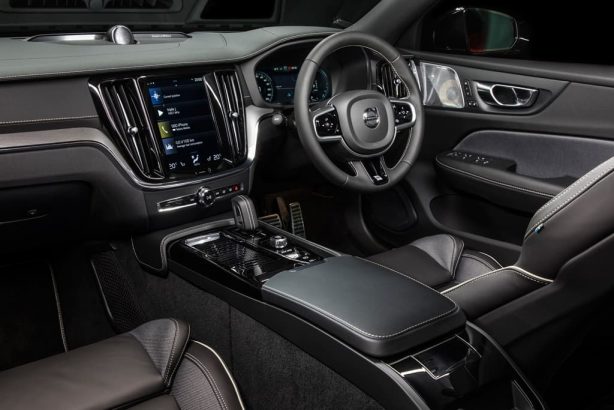 There’s a big jump of $21,000 to the T8 R-Design which is priced from $85,990. Volvo expects this model to contribute just 3 to 5 percent of total sales for the S60. All stickers are excluding on-road costs.

Finally, R-Design variants get unique styling inside and out, Four-C Chassis (except T8), steering wheel shift paddles and 230V power outlet in the centre console.

The Momentum rides on 17-inch alloy wheels, while the others get bigger 19-inch alloys. All models come with a temporary spare tyre, while the T8 has a tyre puncture repair kit. 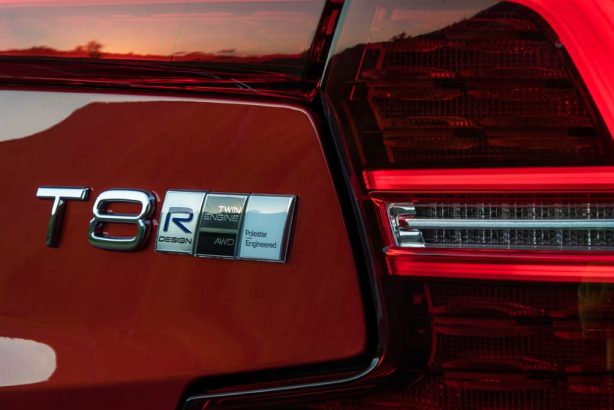 All S60s at the launch drive were R-Design variants dressed in eye-catching Fusion Red metallic paint ($1,500).

We hopped into the T8 for the first leg of the drive from Adelaide Airport towards St Hugo Restaurant up in the Barossa Valley via a ribbon of scenic country roads through the Adelaide Hills.

First impression is excellent. The T8 is quiet and comfortable despite running almost entirely on its petrol engine throughout the drive, as the batteries did not appear to be charged for the drive.

In theory, the 10.4kWh lithium-ion batteries could provide up to 50km of pure electric cruising but the run out of the airport towards the hills in city traffic saw the engine acting more like a generator charging the batteries.

We left the drive mode in Eco to let the computer work out the most efficient way to use energy.

Sitting on passively damped Dynamic Chassis, the T8 soaks up our broken tarmac with relative ease. The cabin is very well insulated from suspension thumping even when encountering potholes. 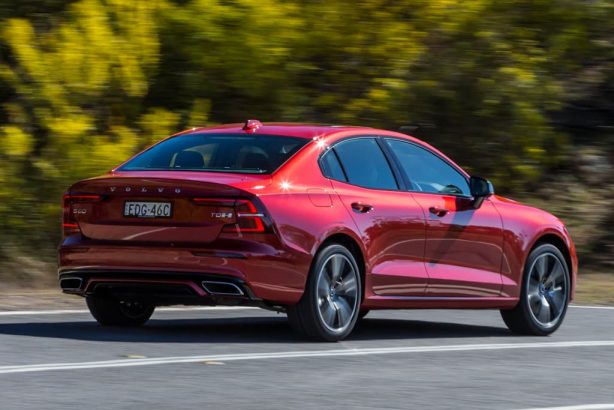 On the windy roads up in the Adelaide Hills, the T8 handles relatively well around the corners despite its two tonne heft.

With the drive mode set in ‘Polestar Engineered’, which is Volvo-speak for ‘dynamic’ or ‘sport’, the engine and transmission suddenly become more responsive. Throttle inputs are sharp and the transmission hangs on to revs longer to ensure you’re always in the power zone.

There is mild understeer if you push it too hard but back off on the throttle a little and the all-wheel drive system, along with the Continental Premium Contact 6 tyres, grip the tarmac rather faithfully.

Unlike most of its German counterparts that weigh up their steerings in sports/dynamic mode, the S60’s steering remains relatively light, which suits us just fine. There’s even some steering feel from the electro-mechanical unit!

Most brakes with regenerative systems tend to feel a little artificial with not much brake pedal feel but not the T8’s. It’s easy to modulate for just the right amount of pressure.

The eight-speed automatic is well programmed and dispenses its ratios quickly and smoothly, as such we left it in auto mode throughout the drive.

What about the T5? 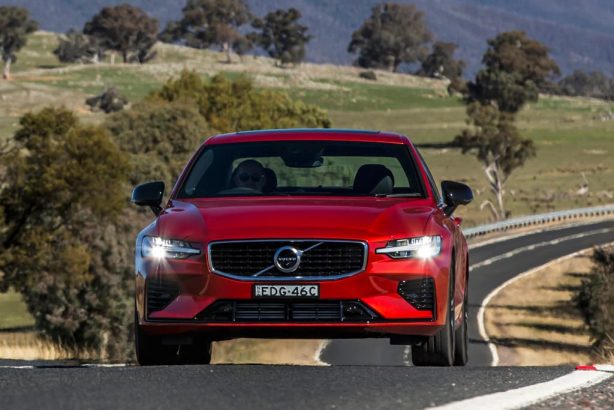 This would be our pick. It’s the more convincing sports sedan of the two. It feels just a tad more agile than the porky T8 but still as responsive. It’s also A LOT cheaper, too.

You can feel a slight deficit in power in a straight line but 192kW and 400Nm is still plenty if you asked us and is more than enough to take advantage of that gap in the traffic if needs be. Around the bends, it feels less nose heavy and turns in with a bit more alacrity.

Compare to the T8, there’s slight turbo lag on the lowered reaches of the rev range in the T5 but it’s generally quite a responsive unit on the whole. Pity Volvo engineers haven’t spent a bit more time in tuning the engine and exhaust soundtrack, as they don’t sound overly sporty. 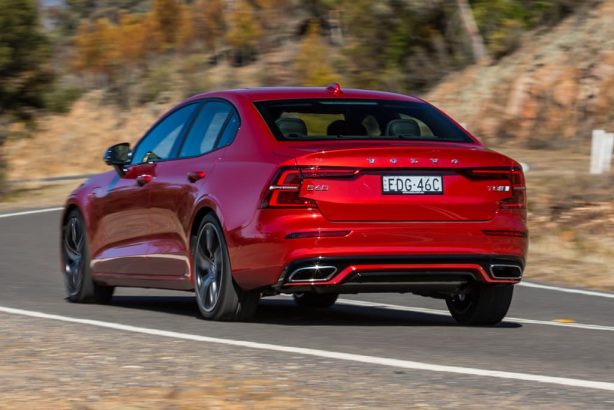 The eight-speed transmission is shared with the T8 and as such is similarly delightful to use.

The Four-C Chassis with adaptive dampers seems to iron out road imperfections a little better in Comfort mode compare to the Dynamic Chassis although the difference is relatively minute.

Peak hour traffic on the way back to the airport allowed us to test the Volvo’s Pilot Assist and we are happy to report it is still one of the best. Its adaptive cruise control isn’t overly reactive unlike some similar system from rivals where the car will hit the brakes hard when the car in front slows down slightly to turn off the road.

In the Volvo, if you turn the steering slightly away from the turning vehicle, the system is clever enough to just tap the brakes gently and then move on.

Based on presentation and feel, the US-built Volvo S60 is right up there with the best from Germany and Japan.

It is comfortable and roomy, with plenty of standard kit to shame even its Japanese rivals. Refreshingly, it’s a Volvo that drives and handles well, and dare we say, desirable.

Volvo has also announced their completely revamped Volvo Fixed Price Service Plans that coincided with the launch of the S60, which means it’s running costs is now one of the lowest. It costs just $1,595 to service the S60 for the first three years or up to 45,000km, down from $2,795 previously.

Volvo has made the right choice is tasking the S60 to re-establish itself in the tough passenger car segment and the 400 annual sales estimate might prove conservative.