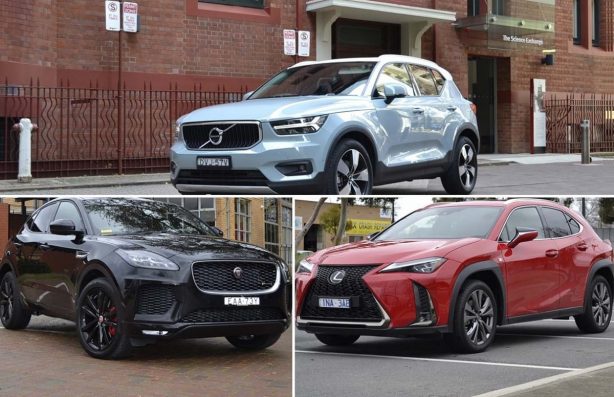 The modern small SUV has replaced the humble hatch back as a jack-of-all-trades, offering space, style, and the all-important elevated driving position we can’t seem to get enough of.

And if you want something a little bit fancier, there are rich pickings, too from the premium brands where it’s possible to nab one for less than $45,000. The options are virtually limitless.

The catalyst for our comparison is, of course, the box-fresh Lexus UX and newcomer to this thriving segment. The other two brought along for the test are the Volvo XC40 and the Jaguar E-Pace, both of which are still relatively new.

The Lexus UX and Jaguar E-Pace here are the sportier variants of their line-up, in F-Sport and R-Dynamic guise, respectively, while the Volvo XC60 supplied for this test is the luxury and comfort focused Inscription, and not the more athletic R-Design.

To make things just a little more interesting, the Jaguar E-Pace is diesel powered, while the others are petrol motivated, although all three displace 2.0-litre in capacity.

As you can see, finding the model that matches exactly with what you want can be as challenging as threading a needle with your eyes shut. And while the three models presented here may differ in specifications, peel back the layers of equipment and choice of diet and their fundamentals and outputs are closely matched.

All three are entry-level models of their respective line-up with room for five, a jacked up driving position and comes with technologies that resonate with their intended demographics.

So which one of these three gets our tick? Read on to find out… 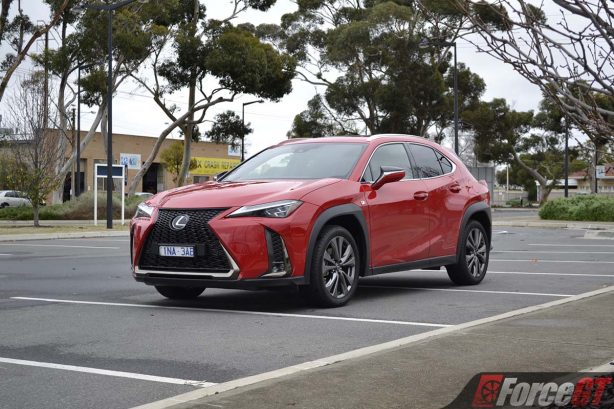 All three are youthful in their styling as you might expect given their target audience of young urbanites.

The Lexus UX is undoubtedly the most adventurously styled of the three, which is somewhat surprising given the Japanese brand isn’t traditionally known for being…well, adventurous.

There are plenty of lines, creases and shapes to give the little Lexus character compare to its more restraint European rivals. Its rear end is especially attractive with the classy 3D LED taillight stretching across the entire width of the tailgate and is especially spectacular at night. The F-Sport’s larger 18-inch alloy wheels also fill the muscular wheel arches better than lower end models.

The Volvo XC40 on the other hand can only come from Sweden with its efficient use of lines. Its Thor’s Hammer daytime running lights tell you it’s a Volvo from afar, while those L-shaped taillights, door scallops and funky upturn C-pillars make the baby Volvo stand out from the crowd, too. Decked out in Inscription trim and dressed in champagne Luminous Sand paintwork, the XC40 looks decidedly mature compared to the others.

Meanwhile, the E-Pace is all cutesy and adorable, although our optionally blacked out tester with its Santorini Black Metallic paint and optional 20” black wheels does go a long way in dialling up the aggression.

Jump inside and the UX continues to impress with high-quality, soft touch plastics all round and the largest infotainment screen of the group. The 10.3-inch high-resolution screen dispenses crisp graphics and is complemented by an LFA-inspired digital instrument cluster with trick sliding ring that glides across the instrumentation to display different driver info.

Ergonomics are excellent with everything angled towards the driver, while the front seats are easily the most supportive in the group. What let the UX down are tight rear legroom and the clunky infotainment screen touchpad that is hard to use even for a left-hander. To add insult to injury, it’s the only one in the group without Apple CarPlay and Android Auto.

Compared to the UX, the E-Paces interior looks like it’s from an era when Paula Abdul still rules the airwaves. While I have no issue with the old-school analogue dials, the dashboard design looks uninspiring and dated against the others. It also suffers from poor ergonomics with the touch screen tilted in a way that it reflects sunlight, making it hard to use especially in summer. It is also placed a little too far away to be able to reach comfortably.

Happily, cabin materials are top notch with plenty of leather and aluminium trim to remind you that you are in a premium marque (although curiously, the rear parcel shelf looks and feel cheap), and it’s sat-nav graphics and usability are one of the best. You can pinch, drag and do pretty much what you do to your smartphone on the Jag’s screen and it will respond instantly. 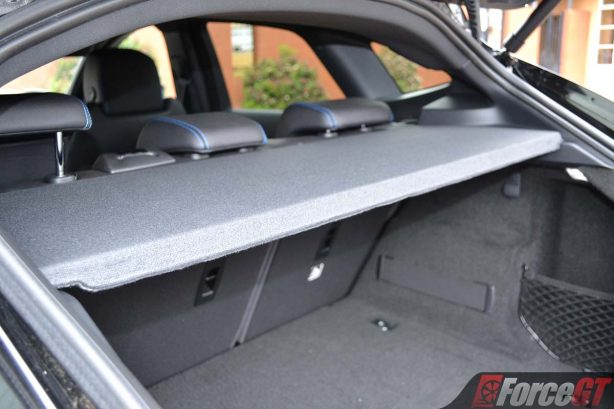 The Volvo – like the Lexus – has a cabin that is modern, classy and well laid out. There are large carpet-line door pockets, a gigantic centre console which incorporates a removable rubbish bin, and a large portrait infotainment screen.

Behind the automatic tailgate, the Lexus UX loses out with the smallest boot at 371 litres, followed by the Volvo XC40’s 460 litres. The Jaguar E-Pace comes with the most commodious boot here at 484 litres. All three can be expanded by folding the rear seats.

While the E-Pace clearly lags the others in this round, it’s harder to split the UX and XC40 but the tick goes to the XC40 for its simple, effective and practical interior.

The UX and E-Pace both get useful adaptive matrix LED headlights that automatically dip select LEDs to prevent dazzling oncoming vehicles while on high-beam.

Being a Lexus, all of the above come as standard, while the European duo also come loaded with a bunch of cost options some of which should have been standard such as heated front seats (XC40), DAB+ digital radio (E-Pace) and Keyless Entry (E-Pace).

Jaguar also charges extra for its Adaptive Cruise Control, Blind Spot Assist and Autonomous Emergency Braking, which are bundled in the Drive Pro Pack for $1,020.

Being an aspirated petrol unit, the Lexus UX 200 is the least powerful, with just 126kW and 205Nm of torque directed to the front wheels via a continuously variable transmission (CVT).

The Jaguar E-Pace D180’s 2.0-litre turbo-diesel four meanwhile produces a decent 132kW and a stout 430Nm. It is married to a nine-speed ZF automatic driving all four wheels.

However, both are overshadowed by the Volvo XC40 T4’s turbocharged 2.0-litre four-cylinder petrol producing 140kW and 300Nm that drives all four wheels via an Aisin eight-speed and Haldex-type all-wheel drive system.

As a result, the UX’s real-world performance is almost a match for the E-Pace and not far behind the XC40. 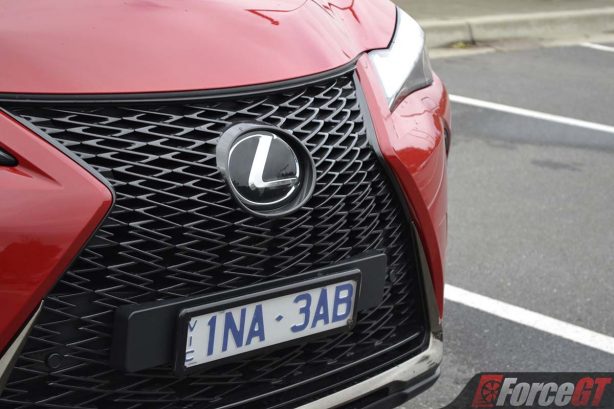 While the E-Pace and XC40 certainly feel perky, the same can’t be said about the UX, as it just lacks the zing that the turbochargers bring to the party. The CVT – although much better than earlier iterations, especially with Lexus’ trick new separate first gear to banish that slipping clutch feel – is still no match for conventional automatics for true driver’s engagement.

But all that changes the moment you hit a corner because with less weight to deal with and a sportier suspension tune, the UX feels light on its feet with less body movement. In fact, you’ll be hard pressed to tell it’s only front wheel driven as it darts around from corner to corner. Along with a low set driving position and a responsive chassis, the UX feels properly car-like and athletic.

However, that isn’t to say the other two aren’t as agile. Far from it. All three have excellent levels of body control, especially the E-Pace R-Dynamic. Even the XC40 with its more comfort focus suspension feels surprisingly lively around corners. 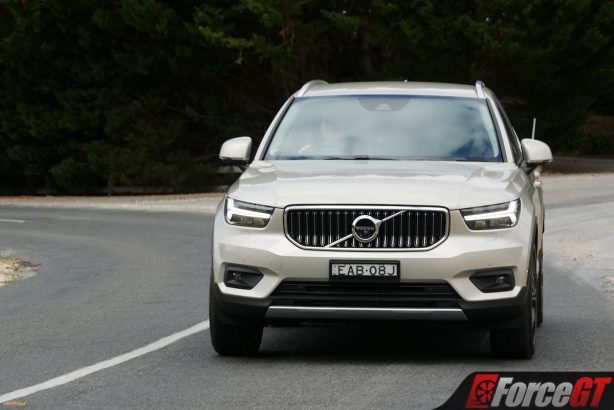 Of course, you can get on the throttle much earlier on exits with the all-wheel drive pair where they just dig in and power out, leaving the front-drive UX in their wake.

Steering feel and response are also decent in all three which enables you to place their varying noses where you want them to be. Depending on how heavy you like your steering, the Volvo’s the lightest followed by the Lexus, while the Jag is the heaviest.

Of the three, drivers would gravitate towards the E-Pace for its jacked up hot hatch feel and tight handling. In R-Dynamic guise, it’s the sportiest of the three followed by the almost equally athletic UX. The XC40 in comfort focus Inscription trim isn’t far behind. 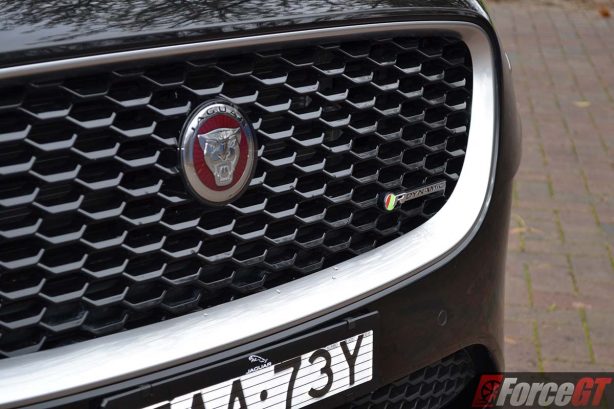 It is also worth noting the UX and E-Pace are equipped with adaptive suspension giving them a slight edge, while the T4 comes with fixed rate dampers.

At the end of this round, it’s a hard decision, as all three handles positively well. But the E-Pace’s slightly firmer ride around town looses it a few points. The UX, while the least powerful, makes up for it in its all round endearing dynamics and agility – something not usually used to describe Lexus of old.

But the surprise here is the Volvo. It is comfortable around town, yet sharp enough around the bends. Its sweet turbocharged petrol is also refined and responsive. It threads the fine line between comfort and handling the best. Along with a beautifully crafted interior, it has to be the winner of this round.

Owners of both the XC40 and E-Pace are able to purchase servicing plans that cover all their servicing costs for the first five years.

Volvo has also just revamped their fixed price service offering and is more compelling than ever. The XC40 now costs just $1,595 to service for the first three years or 45,000km, which translates to $531.67/year. While it’s still more expensive than the E-Pace, it is a far cry from the eye-watering SmartCare plans of old.

Meanwhile, Lexus has no official capped-price servicing plan like its rivals but expect to pay around $600 at least every 12 months, which equates to $3,000 for the first five years.

Fuel consumption on test is equally disparate, with the UX coming in at a very reasonable 6.3L/100km in the combined cycle, while the Volvo sipped 9.5L/100km. As expected, the diesel E-Pace is the most frugal, drinking just 6.1L/100km.

In terms of running costs, the Jaguar E-Pace clearly gets the tick.

The UX brings fresh styling, the latest technologies and newfound dynamism to the brand but falters when it comes to rear seat legroom and boot space. We also question Lexus’ persistence with fitting its cars with CVT transmission – especially an F-Sport model with sporting intentions.

Finally, its lack of Apple CarPlay and Android Auto is unforgivable (although Lexus will introduce them gradually on all models later this year)

Jaguar’s engineers should be applauded for making the E-Pace drive the way it does when it weighs so much. It feels like a hot hatch on stilts and comes with the biggest boot of the three. It also has the lowers running costs of the three.

The Volvo XC40 has beaten the Jaguar E-Pace in our previous comparison and it has emerged the victor in this three-way shootout.

Its combination of style, practicality, dynamics, comfort and technology see it getting the big tick from us, and Volvo’s competitive new capped price servicing further marks the baby Volvo as a compelling proposition.

Nonetheless, all three baby SUVs here are delightfully capable and likeable, and you wouldn’t go wrong putting money on any of them.