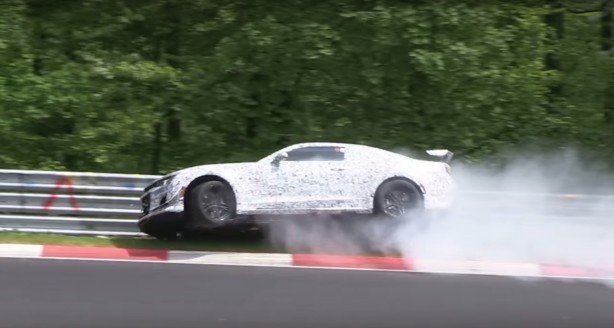 A 2017 Chevrolet Camaro Z/28 prototype has been caught on camera crashing into the barriers at the notorious Nürburgring track.

From the footage, it appears either the driver was too aggressive on the brakes or the development prototype’s brakes locked while coming into a corner, causing the car kiss the barrier.

Luckily, the damage wasn’t very severe and the car was still driveable. Both test drivers also appear to be unhurt.

The Camaro Z/28 is set to arrive as a lighter, harder version of the Camaro ZL1 later this year. While the crash could be slight setback to the car’s development plans, it isn’t expected to have a significant impact on the car’s arrival.

It is still unclear at this stage what lurks underneath the car’s bonnet but insiders say the new Z/28 will be powered by the same engine as the Camaro ZL1, that means GM’s LT4 6.2-litre small-block V8, which can deliver up to 478kW.

The new model will be available with GM’s active damping technology and Magnetic Ride Control. The aggressive aero kit, including its fixed rear wing, also probably means the Z/28 will offer high levels of downforce.

Watch the crash in the video below (you can skip to 1:35 if you want to skip the rest of the test footage).