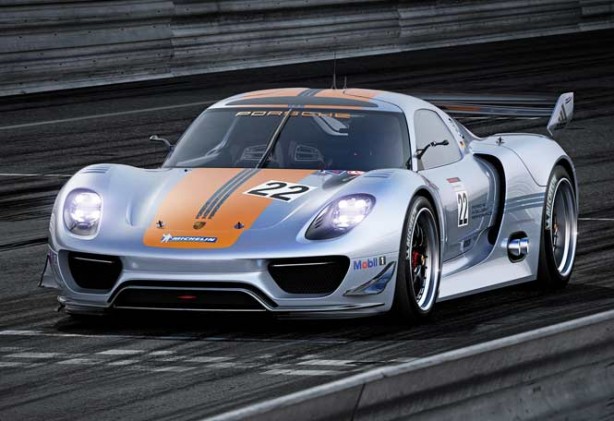 The Porsche Hybrid is said to be close to production ready and is described as a race car that combines the ‘technology fitted to the 911 GT3 R Hybrid and the design of the gorgeous 918 Spyder’ that we saw at last year’s Geneva Show.

The RSR’s V8 is a development of the direct injection unit from the RS Spyder race car, producing 420kW at 10,300rpm. This is aided by two electric motors that offer torque vectoring on the front axle, with each contributing 75kW for a total of 150kW. All in, the power rating tops 570kW. This is mated to a 6-speed constant-mesh gearbox with longitudinally mounted shafts and straight-toothed spur gears, operated via steering wheel shift paddles.

There is also regenerative power in the car’s arsenal. Power generated during braking is stored in an optimised flywheel accumulator, located at where the passenger seat is normally. The flywheel rotates at up to 36,000rpm. At the push of a button, the driver is able to release the energy stored in the charged accumulator and use it for a short burst lasting around 8 seconds.

This system is already being employed in the 911 GT3 R Hybrid to either delay a pit stop or reduce the fuel tank volume and weight.

Other notable features include doors which open obliquely upwards, air intake in the roof between the wing doors, quick action locks on the front and rear CFRP lids, two roof mounted aerials for pit radio and telemetry, RS Spyder-like small, lateral front flics and air splitters beneath the front lip.