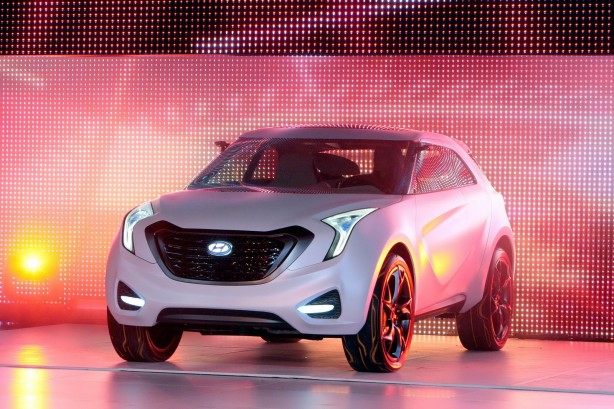 Up and coming Korean carmaker, Hyundai showed case an interesting concept – the Curb. It is a conceptual study for a small crossover model positioned under the iX35. Aimed at young urbanites, it is labelled an Urban Activity Vehicle by Hyundai.

Designed by the firms Californian studio, the Curb’s styling is said to be an evolution of Hyundai’s “Fluidic Sculpture” design language as seen on the i45 and upcoming i35.

“We wanted the Curb to be urban tough without looking like a Brink’s truck,” said Jason Brown, Hyundai designer. Like all small SUV, the Curb isn’t designed to conquer rough terrain.

“The world has never seen lines like this on a car before,” proclaimed another Hyundai designer, Arash Badeanlou, “it is as if the architect Santiago Calatrava inspired it,” he added.

The Curb is the 7th vehicle to come out of Hyundai’s California Design Centre. It is powered by a 1.6-litre turbocharged 4-cylinder engine with direct injection and is mated to Hyundai’s Direct Shift Gearbox (DSG). The engine produces 131kW and 229Nm of torque, not bad for a little engine. The Curb would also delivery extra mileage with Idle Stop and Go (ISG) technology.