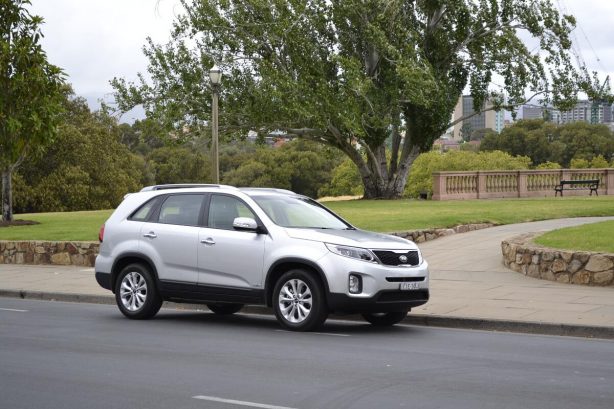 Riding on the burgeoning wave of mid-sized SUVs, Kia recently updated its popular Sorento that first hit the market in 2009 – an update that is needed to see off fresh threats that have emerged onto the field.

Segment favourites like the Ford Territory and Toyota Kluger, have all been face-lifted in the last few years. And then, there is the recently launched Jeep Grand Cherokee and, from parent company, the Hyundai Santa Fe (which we reviewed recently).

So, does the fresh new 2013 Kia Sorento have what it takes to remain competitive in light of highly capable threats from the opposite field?

The previous-generation Sorento was a tidy looker, if a little anonymous. With the latest update, Kia’s famous design whizz, Peter Schreyer, has put his magic touch to liven things up a little. The 2013 model looks unquestionably more upmarket, with the company’s trademark ‘tiger nose’ grille and vertical front fog lights. Kia’s decision to equip all its cars with LED daytime running lights also helps with the premium looks. 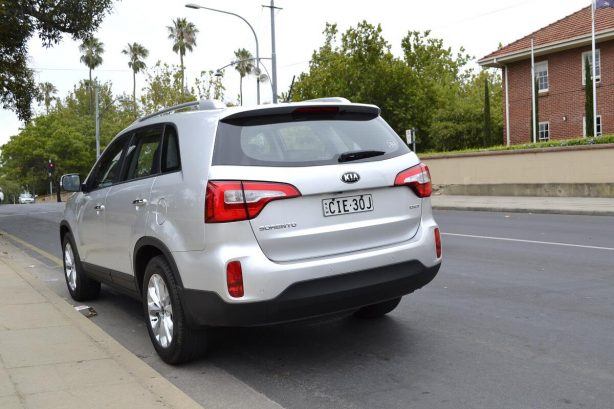 However, to this writer’s eyes, the car looks most distinctive from the back. Gone were the old car’s big and featureless taillights, and in their place, sharp looking Audi-ish LED lights (non LED on entry Si model). During launch, Kia also pointed out that not only does the Sorento’s sheet metal looks good, its designers and engineers also paid careful attention to its surfacing. As a result, the new car is more slippery than before, with a Cd of 0.34.

Inside, the well laid-out dash is covered in soft touch plastics and every contact area exudes a sense of quality and robust feel to them. All models, bar Si, is also equipped with a classy 7” colour TFT instrument cluster that encompasses the speedo and 6-function trip-computer display. In ‘manual’ mode, the fonts on the speedo would even change to italic to remind you that you’re in fun mode. 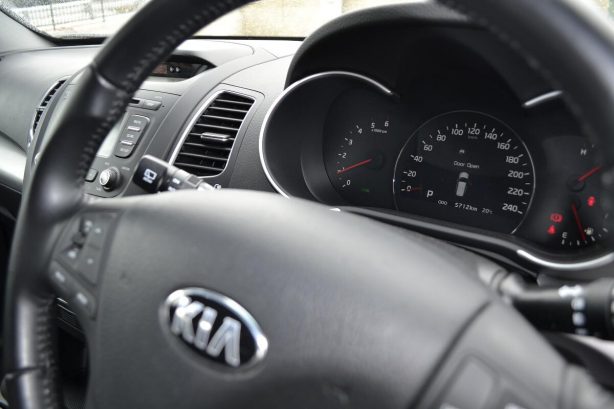 The Sorento is a 7-seater. Its third row of seats is a cinch to use and fold flat to reveal a 1,047 litre boot capacity (258 litre when up). It can be further enlarged to 2,052 litres when the second row is folded.

There are cupholders for all passengers to keep them hydrated on long journeys, of which the Sorento excels in. The cabin is quiet and the ride is compliant on the freeway. Less appealing though is the foot-operated parking brake on all but the diesel manual Si variant.

Underneath the flashy new sheet metal, the Sorento shares its underpinnings with the Hyundai Santa Fe. However, unlike the Santa Fe which is available only in all-wheel-drive, the Kia can be had in 2WD. Though, like most things in life, there is a catch – it is only matched with a thirsty 3.5-litre V6, a powerplant that is also exclusive to the Kia Sorento. The 2.2-litre diesel, is common to both.

It is a punchy and refined diesel, with 145kW and 436Nm of torque from 1,800 – 2,500rpm and hardly noticeable at cruising speed. It is mated with the brand’s 6-speed automatic transmission that is quick shifting and smooth. Those who prioritise economy over performance could also hit the ECO button that dulls throttle input and up-shifts early. What’s disappointing though, is the transmission doesn’t hold gear in manual mode. It will up-shift near redline.

The silky smooth 3.5-litre V6 petrol unit boasts a healthy 204kW and 335Nm. It’s powerful but feels a bit lazy. With all power sent to the front wheels only, getting good traction can be a struggle under hard acceleration. It’s a shame this engine is not offered in 4WD form. 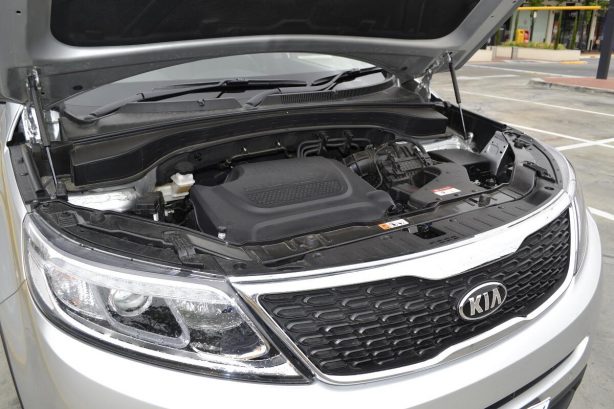 When the road gets twisty, the torquey diesel is effortless in the way it carves up the journey. There is noticeably less roll (unless really pushed) compared to the Hyundai Santa Fe, thanks in part to Kia’s local tuning of the Sorento’s suspension.

There is also a big improvement in the car’s electric steering’s feel, not just against the Sorento, but also compared to other Korean offerings, which is totally unexpected. It is still a little slow and rubbery, but brings three selectable modes – Normal, Comfort and Sport.

The steering is lightest in Comfort and only really useful when parking, while Sport brings a heavier and more direct feel that is good for those enthusiastic drive – which is unlikely for the typical Sorento owner. Normal setting offers a compromise between the two. Turning circle, however, isn’t the car’s forte. 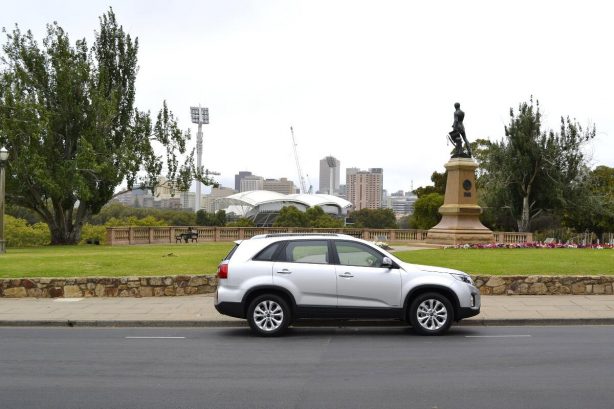 Another gripe I have relates to the Sorento’s spongy brake feel. It doesn’t bite as hard as one expects it to and has resulted in a couple of heart-stopping moments when I nearly rear-ended the car in front. 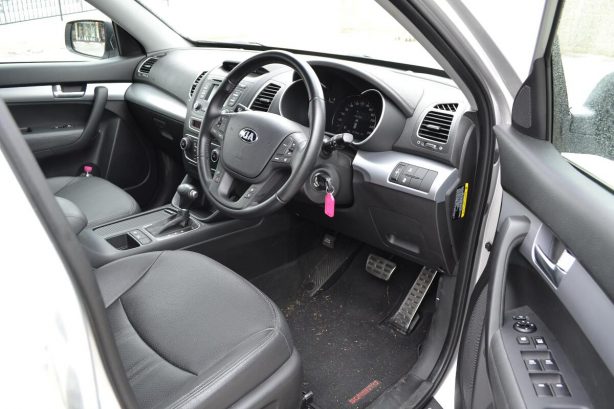 It is almost mundane to talk about the Kia’s quality these days, as with each successive generation, the bar is set higher. If we put a tape over the badges, one is likely to mistaken it for a Japanese or even German vehicle. Such is the quality, both perceived and real, of Korean products.

It is easy to find a good driving position in the Sorento, thanks to its reach and rake adjustable leather wrapped steering, and 8-way electrically adjustable drivers seats (manual on Si). The seats themselves are also comfortable although lacking a bit in thigh support. Adults can just about squeeze into the rearmost two seats, and is best reserve for short journeys or children.

Over my week long test, there wasn’t a single creak or rattle to be emanated from anywhere within the cabin. The doors shut with a solid feel to them and most of the surfaces have exemplary tactile sensation.

With an equal split between city and freeway driving, the Kia Sorento Diesel returned a reasonable 9.1L/100km. The reading even dropped to the 6L/100km on a day trip to the wine regions of Barossa Valley in South Australia.

On the other hand, the 3.5-litre V6 petrol struggles to do any better than 11.5L/100km, even with mostly freeway driving. 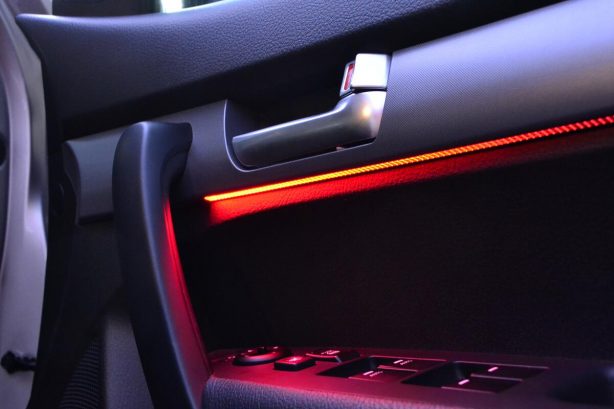 The Kia Sorento is generously equipped, even for the base model. Easy to use Bluetooth and USB input with IPod connectivity and music streaming are standard, so too is dual-zone climate control. Mid and top of the range models also score groovy mood lighting, scuff plate illumination and useful front and rear parking sensors with guidelines.

On the safety front, all are equipped with 6 airbags and almost the full 26 alphabet acronyms – ABS, EBD, BA, ESC with TCS, VSM and HAC.

With the 2013 update, the Sorento has finally got the looks to match its solid unerpinnings. Although not as exciting to look at as the Hyundai Santa Fe, it is better to drive. The 2.2-litre diesel is definitely the pick. It is punchy, refined and relatively fuel efficient.

The well-equipped and thought-out Sorento should be on the family car shopping list for anyone looking for a well built, 7-seat SUV.

Car reviewed is based on Australian Specified models and may differ to that available in your country of residence.

Previous 2015 Ford Mustang to be sleeker, sportier and sold worldwide
Next Fiat and Alfa Romeo prices slashed in Australia