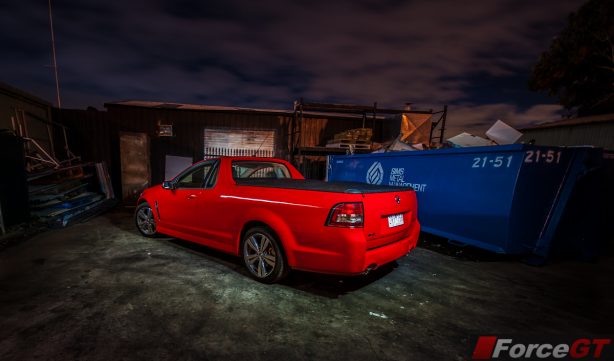 Having driven the latest Holden Commodore Evoke a couple of weeks back and came out mightily impressed, jumping into the VF Commodore Ute SV6 is like swapping legs with Tyson Gay – one of the world’s top sprinters.

With two less doors and only a pair of sports front seats, Australia’s quintessential sports car immediately feels sportier. The SV6 badge brings an extra 25kW of power and 60Nm of torque from the 3.6-litre direct-injected V6, plus the vocal cord of a crocodile emitting a deep, solid baritone. Yes, Holden’s engineers have finally sorted out the SV6’s engine note.

It is a good thing because the SV6 yearns to be driven. Its athleticism can be attributed to the FE2 chassis set up, which is the second highest in the ride and handling hierarchy of the VF Commodore range. The super sharp FE3 set up is reserved for the SSV Redline, while the comfort biased FE1 underpins the Evoke, Calais and Caprice models. 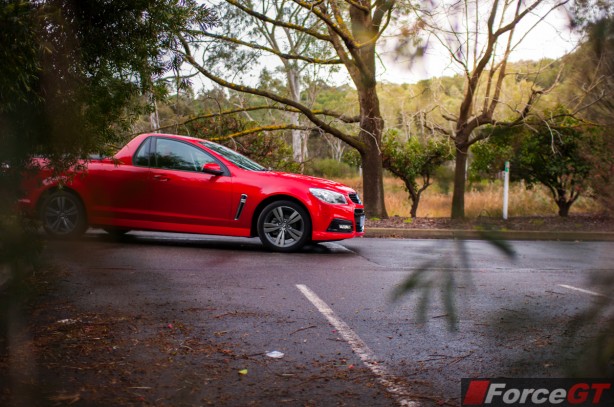 FE2 tune brings stiffer damper and a faster steering ratio with increased vehicle feedback and faster on-centre steering ratio, for a sharper and more nimble vehicle response. With 3.29 million engineering development kilometres carried out in a range of facilities around the world, including the famed Nürburgring in Germany, it is not surprising the SV6 Ute handles the way it does.

On our usual test loop around the Adelaide Hills, where the recent Targa Adelaide took place, the Ute’s depth of abilities is obvious. Although lacking the outright grunt of the SS, the SV6 is also 52kg lighter and is reflected in its nimble demeanour when thrown into corners.

The car turns in with the conviction of a teenager with her heart set on Justin Bieber. The Ute’s new nose tracks the driver’s intended line of travel beautifully and with fluidity that is unmatched in its class. There is also a distinct lack of axle tramp and rack rattle from the steering wheel. Unladen, and with hardly any weight over the rear axle, its tail can get a little slippery – in a fun way that is, especially in the wet. Its superbly calibrated electronic stability control system allowing a certain degree of entertainment while keeping a watchful eye. 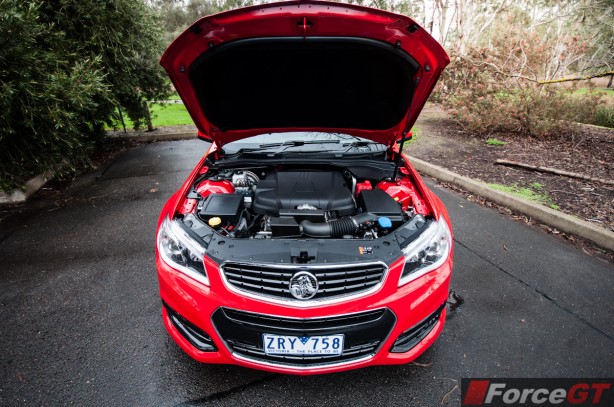 Tweaks to the V6 engine means peak torque arrives slightly lower in the SV6’s rev range and is swiftly scooped up by the 6-speed automatic transmission. Over the various uphill sections of the test route, most of the 210kW is readily accessible as the gearbox senses engine load and throttle opening, and drop back and hold a gear without frantically hunting through the ratios.

With the switch to electric power steering, there is always a risk that steering feel might be compromised. Not in the Commodore. The chunky, leather-wrapped steering wheel is direct, well weighted and communicative at high speeds around the twisty, while offering good assistance at low speeds.

Like the rest of the VF sport range, the SV6 Ute benefits from a refreshed styling up front, this includes sports bumper with integrated LED daytime running lights, side skirts, new headlights and an aluminium bonnet. However, everything else aft of the A-pillars is carried over from the VE. 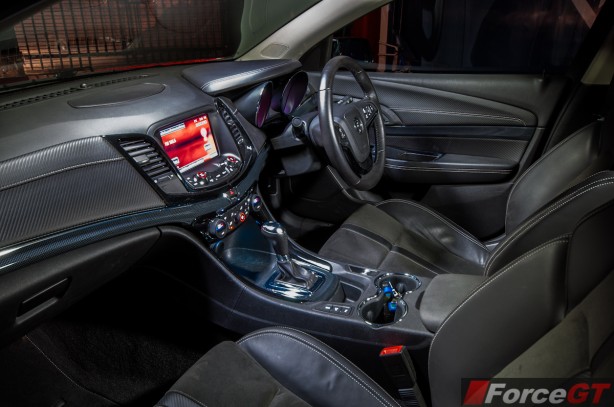 Happily, even the Ute now gets a reverse camera as standard to compensate for the non-existent over the shoulder visibility. A Blind Sport Alert system is also standard, along with Holden’s MyLink Infotainment System with 8” high-resolution colour touch-screen and Auto Park Assist.

It seems that Holden has indeed saved the best for last, as the VF Commodore SV6 Ute is a delectable driver’s car. Its highly accomplished chassis has just been made even better. Combined with an interior that not only stands proud of locally manufactured rivals, but more expensive imports, the Holden SV6 Ute is a true sports car with added bonus of unrivalled load carrying capacity.

The only chink in the Holden’s consummate armour is the higher than expected fuel consumption.