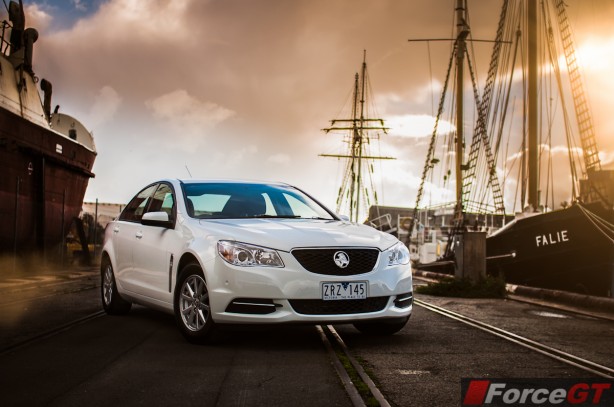 I approached the Holden VF Commodore Evoke with slight melancholy, because I know this gleaming new car will be the last of its line – the last truly indigenous Commodore. Like the Sumatran Tiger which has fewer than 400 in the wild, the Commodore is high on the automotive endangered species list.

When Holden launched the VE back in 2006, the car broke new grounds in terms of design, engineering and dynamics. Not only was the VE a properly handsome sedan, its Australian-developed Zeta rear-drive platform endowed the car with driving dynamics more akin to European sports sedan costing many times more than the Commodore’s humble blue-collar price tag.

It should have been a massive success for Holden, but it wasn’t. Since the car’s launch, the Commodore’s market share has been diminishing like the melting Alaskan ice caps. In 2011, the little imported Mazda3 overtook the Commodore as the most popular car in Australia – a crown it has retained ever since.

Holden is hoping that the latest VF update, together with sharper pricing, could turn its dwindling fortune around. We sincerely hope it would, because I can tell you right now that Australia’s latest baby is good!

Let’s find out why…. 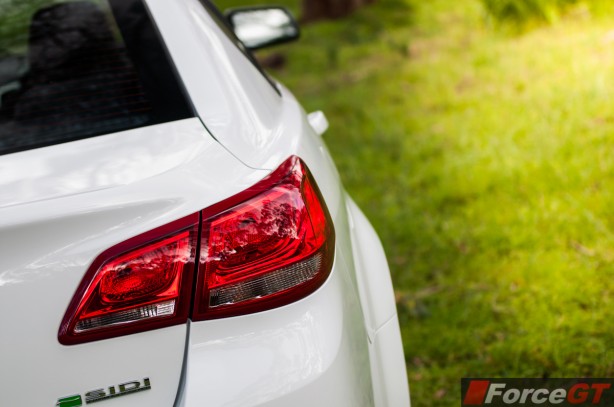 The VF is not a completely new-generation model. The refreshed styling is limited to the front and rear facia, with the doors, glasshouse and roof carried over from the VE. Nevertheless, Holden’s designers deserve a round of applause as they managed to pull off a distinctly different look, under a very tight purse string, courtesy of the Global Financial Crisis in 2008.

The entry-level Evoke replaces the Omega as well as the mid-spec Berlina. Like the rest of the VF range (which we will review in the coming weeks), it’s completely new ahead of the windscreen. In the quest to shed kilos, the bonnet and boot lid are made of aluminium, a first for an Australian manufactured vehicle. Similarly, the VE’s distinctive front wheel arches have been toned down to reduce turbulent airflow.

At the other end, the redesign boot lid sits higher in the airstream and incorporates an integrated spoiler to better control air separation. Even the fine vertical crease that runs through the tail lamps has a purpose beyond good looks. 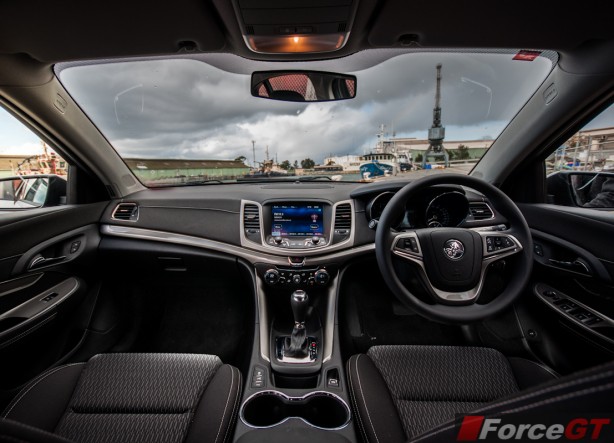 While the Evoke’s exterior makeover is arguably restrained, its fresh new interior is a triumph. The contemporary dashboard’s design and finishes, complete with an 8-inch touchscreen, wouldn’t look out of place in a car wearing a premium badge.  Gone was the cheap looking handbrake, in its place a space saving electronic park brake. The awkwardly placed power windows switches have also been moved to the driver’s door.

The Evoke’s thick-rimmed plastic steering wheel is one of the best I’ve ever come across. It feels soft and non-plasticy. The fabric upholstery on the seats is attractive and comfortable. The same material can be found on the passenger side of the dash, giving the car a classy feel.

Sadly, the VF’s massive A-pillars and tiny wing mirrors seem to have been carried over from the VE. Together, they conspire to create annoying blind spots that could hide a bus.

Not surprisingly, the Evoke has acres of head and leg room, both in the front and at the back. Lots of thoughtfully laid out storage are dotted around the cabin. Should that be insufficient, there’s a large cargo area at the back with a 496-litre capacity.

While its exterior makeover is limited, underneath, the changes are substantial, with improvements in almost every area, from performance to fuel economy.

Holden’s engineers worked hard on the refinement of the carried over 3.0-litre V6. And, boy, did they succeed. At idle, the engine is almost imperceptible.  On the move, it purrs away at a distant and is impressively polished. 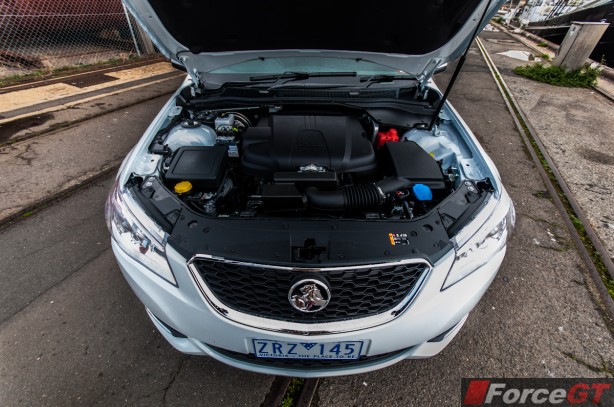 Despite losing 5kW of power compared to the VE in the quest for economy, most drivers will miss it as much as they would miss getting stung in the eye by a bee. Its 185kW output isn’t going to worry the guy in the Renault Mégane RS265 in the next lane either, but the Evoke is quicker than the 9.4 seconds Holden quoted to reach triple digits. We clocked 9 seconds dead.

The entry-level sedan also benefitted most from the VF’s mass reduction. Overall, it is 43kg lighter compared to the Omega it replaces, thanks to the single exhaust system, a lighter driveline and smaller torque converter. These efforts result in a positive impact on handling.

While the 2006 VE Commodore set a new benchmark for ride and handling for Holden, the VF takes it a step further with a delightfully dynamic drive. 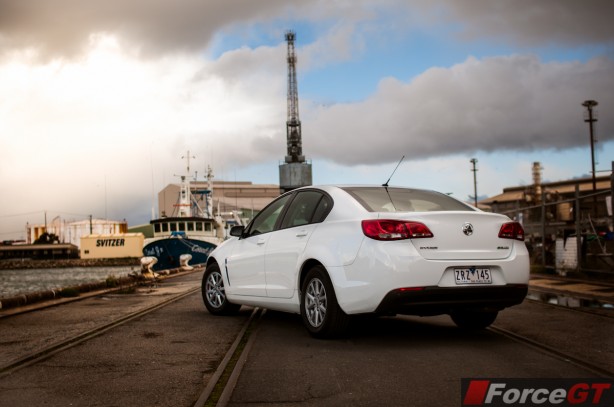 Behind the wheel, the Evoke, with its low-rolling resistant Bridgestone Ecopia tyres and 16-inch alloy wheels, masks its 1,622kg kerb weight better than Lance Armstrong did at covering up his doping deceits. It feels small car-like nimble.

However, it’s a different story in the wet. Like the Holden Volt, it has a tendency to lose grip and push wide in corners. Thankfully, the car’s electric steering provides decent feedback and, more importantly, saves fuel.

Around town, the Evoke is a lesson on how a car should ride. It glides over lumpy urban roads with great stride and is remarkably quiet with love NVH levels. It’s hard not to feel fresh after a journey in the Evoke.

The Evoke feels solid and well put together. Most of the new switchgears have an agreeable heft to them and finishes are first rate. Like the rest of the Holden range, the Evoke comes with 3 year/100,000km warranty should anything goes astray.

This is against Holden’s claim of 8.3L/100km combined. As expected, the Evoke requires only the cheaper 91 RON petrol.

Servicing cost is capped at $185.00 for the first four standard scheduled log book services for the first three years or 60,000km, which ever comes first. 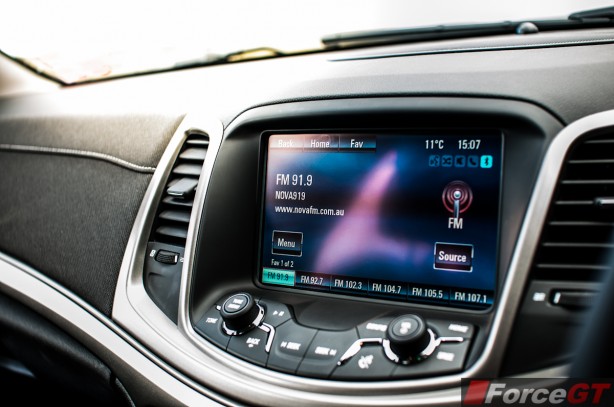 To appeal to tech-savvy buyers, Holden has thrown all the fruits it can at the Evoke. With a switch to GM’s Global-A Electrical Architecture, Holden has been able to equip the whole VF range with some of the most advanced technologies.

The entire lineup is equipped with Auto Park Assist that automatically steers the car into a parking spot using a series of cameras and sensors. It is a welcome addition to a large car like the Commodore.

With improvements in design, economy and a $5,000 lower entry price, the Holden Commodore Evoke is an excellent package for those looking for a comfortable family car. Sure, there are SUV’s out there for a similar price with a tad more versatility, but none can match the Evoke’s driving dynamics and refinement.