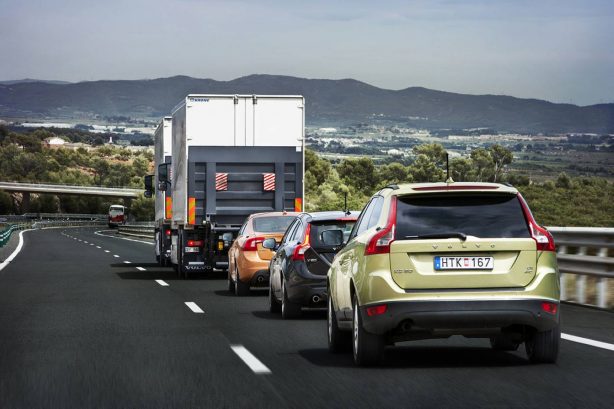 Autonomous driving is now one step closer to reality, thanks to Volvo. The company’s Safe Road Trains for the Environment (SARTRE) project, which involves seven other European partners, has been successfully finalised in 2012.

We have already seen ‘semi-autonomous’ driving in some cars today – namely the Adaptive Cruise Control system. Found in many premium vehicles, the system maintains a set distance from the car in front at while in cruise control. It will even bring the vehicle to a full stop if the vehicle in front comes to a halt. 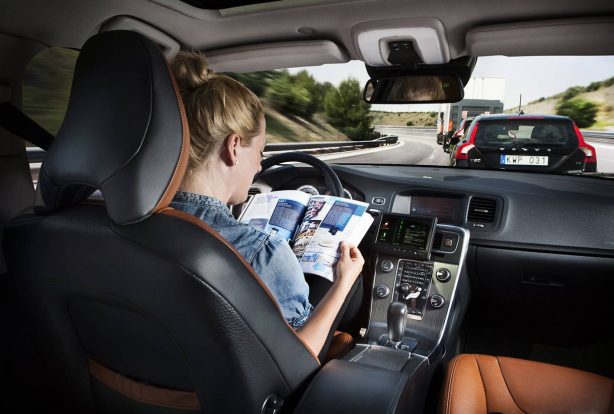 The SARTRE (Safe Road Trains for the Environment) project, involving seven European partners, has been successfully finalised during 2012.

This unique project highlights the potential for implementing road trains on conventional highways, with platooned traffic operating in a mixed environment with other road users.

Thanks to Volvo Car Corporation and the other partners in the SARTRE road train project, you may soon be able to take your hands off the wheel and your eyes off the road in your own car – leaving the automated driving to modern technology.

“The road train is the best of two worlds,” says Erik Coelingh, Technical Specialist at Volvo Car Corporation. “You can enjoy all the multi-tasking possibilities of public transportation behind the wheel of your own car. It’s the perfect complement to the true pleasure of driving a Volvo yourself.”

Four-metre gap between vehicles
Volvo Car Corporation is the only participating car manufacturer in SARTRE. The project road train includes a manually driven lead truck, which is followed by one truck and three Volvo cars (S60, V60 and XC60).

All the following vehicles are driven autonomously at speeds of up to 90km/h – in some cases with no more than a four-metre gap between the vehicles – thanks to a blend of present and new technology.

“The basic principle is that the following vehicles repeat the motion of the lead vehicle,” says Erik Coelingh. “To achieve this we have extended the camera, radar and laser technology used in present safety and support systems such as Adaptive Cruise Control, City Safety, Lane Keeping Aid, Blind Sport Information System and Park Assist Pilot.”

The most important new features that have been added to the vehicles are:

“Road train information and operation will of course be integrated in the Volvo Sensus infotainment system when the technology is ready for production. Booking, joining and leaving the road train must be easy and smooth,” says Erik Coelingh. “Another challenge is to create a system that handles the cost aspects. It is logical that taking the road train will include a fee or an income, depending on whether you own a lead vehicle or a following vehicle.”

Many benefits
Parallel with the attractive possibility to do other things while driving, the road train brings several other crucial advantages:

“The energy-saving potential is 10-20 percent. This means that the journey to your holiday destination doesn’t only become more comfortable and safe – the money you save on reduced fuel consumption can be spent on lunch by the beach instead,” smiles Erik Coelingh.

Stakeholder dialogue
Recognising that the challenge of implementing road train technology on Europe’s highways is not solely a technical matter, SARTRE also includes a major study to identify what changes will be needed for vehicle platooning to become a reality.

“There are several issues to solve before road trains become a reality on European roads. As the leader in car safety, Volvo Car Corporation is particularly focused on emergency situations such as obstacle avoidance or sudden braking. However, we are convinced that road trains have great potential,” concludes Erik Coelingh.

The SARTRE project stands for Safe Road Trains for the Environment. Part-funded by the European Commission under the Framework 7 programme, SARTRE is led by Ricardo UK Ltd and comprises collaboration between the following additional participating companies: Applus+, IDIADA and Tecnalia of Spain, Institut für Kraftfahrzeuge (ika) of the RWTH Aachen University of Germany, and SP Technical Research Institute of Sweden, Volvo Car Corporation and Volvo Group of Sweden.