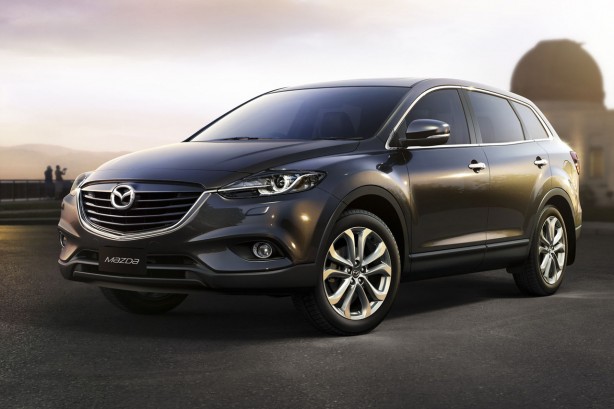 Mazda has announced that the all-new 2013 CX-9 SUV will be making its global debut at the upcoming 2012 Australian International Motor Show in October. The new top of the line SUV from Mazda is expected to hit the showrooms in Australia later this year with worldwide sales to follow not long after.

The design of the 2013 CX-9 follows the footstep of the new 2013 Mazda 6, adopting the “Kodo” design language which in Japanese means “Soul of Motion”, giving the new SUV a sportier and bolder look with more distinctive lines.

The new CX-9 will be powered by an updated 3.7 litre V6 petrol engine featuring Mazda’s SKYACTIV technology. The powerful V6 will be mated to a six-speed automatic transmission.

HIROSHIMA, Japan—Mazda Motor Corporation will hold the world premiere of the refreshed Mazda CX-9 crossover SUV at the 2012 Australian International Motor Show.
Held in Sydney, the 2012 Australian International Motor Show begins October 18 and runs through to October 28, 2012. The 2013 CX-9 will be launched in Australia later this year.
Mazda CX-9 is a crossover sport-utility SUV featuring a distinctive sporty appearance, a high-quality cabin, the flexibility of three-rows, and Mazda’s exciting “Zoom-Zoom” driving dynamics. The current CX-9 has sold over 210,000 units* in 74 countries, including North America and Australia, as Mazda’s range-topping SUV.

The 2013 Mazda CX-9 carries over the utility and dynamic driving performance of the current model while adopting Mazda’s “KODO – Soul of Motion” design theme at the front and rear for even sportier styling and stronger presence. Enhancements in craftsmanship and interior design further the feeling of quality and refinement. With regard to equipment, the infotainment system features the latest audio, navigation and speech-recognition systems based on the Human Machine Interface (HMI) which is intuitive to use. In addition, advanced active-safety features, such as Forward Obstruction Warning System, Lane Departure Warning System, and High Beam Control System, help drivers recognize and avoid danger.

As with the current model, the 2013 CX-9 features the MZI 3.7-liter V6 engine and a six-speed automatic transmission for powerful and refined driving pleasure.

The all-new Mazda6 (known as Atenza in Japan) will also make its Australian premiere in Sydney. It is the second of Mazda’s new generation of products that adopt the full range of SKYACTIV technologies and the KODO – Soul of Motion design theme. It is the first model to be equipped with Mazda’s unique brake energy regeneration system, i-ELOOP.