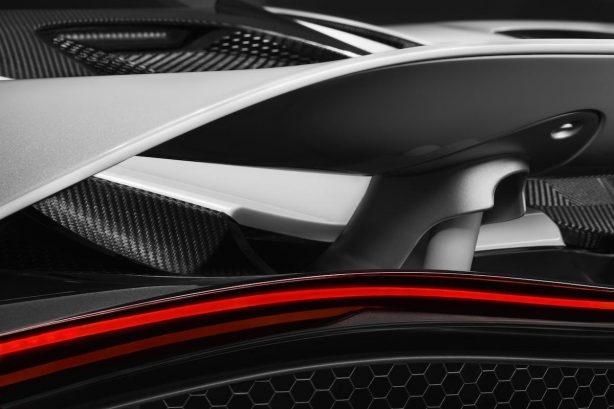 McLaren has dropped another teaser of its upcoming second-generation Super Series, which is set to be unveiled on March 7 at the Geneva Motor Show.

The new supercar is said to be twice as aerodynamically efficient as the McLaren 650S, with increased downforce and improved cooling among the engineering essentials for the new generation.

“The second-generation McLaren Super Series will be as aerodynamically impressive as it is visually beautiful,” commented Mark Vinnels, Executive Director – Product Development, McLaren Automotive. “A range of advanced aerodynamic technologies contributes to maximum generated downforce over 50% greater than that of the McLaren 650S and ensures truly outstanding levels of grip and stability. We have also markedly improved cooling efficiency, with a 15% gain overall and a particular focus on airflow to the engine’s high temperature radiators through a unique new design of dihedral door.”

An active wing that extends over the full rear width of the second-generation McLaren Super Series moves upwards and increases in angle to optimise aerodynamic efficiency and also deploys to its most extreme angle as an airbrake in less than half a second, optimising balance when braking from speed.

The new dihedral door design of the new model showcases McLaren’s innovation and engineering expertise. Two separate air ducts are integrated within the door structure; one forces air from the top of the door down into the High Temperature Radiators that cool the engine, while the other draws air out of the front wheel arch to create increased downforce. This further enhances the diffuser technology first seen in the McLaren P1TM.

Full details of the second-generation Super Series will be confirmed in March, when further images and pricing will also be available.

Previous All-new seven-seat BMW X7 snapped ahead of 2018 debut
Next Singapore’s first-ever electric hypercar, the Dendrobium to debut in Geneva