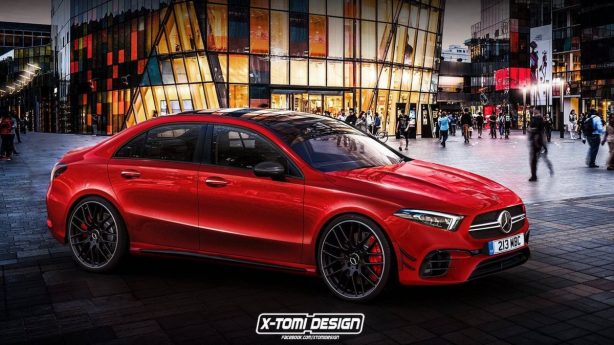 Last week, Mercedes-Benz took the cover off the first ever A-Class sedan at the Beijing Motor Show. The booted sibling of the A-Class hatchback will initially be a China-only model, but we can safely expect it to be introduced to other world markets in the not-too-distant future.

And if that’s the case it also means an AMG version is only a matter of time. While we wait for the real deal from Affalterbach, Hungary’s X-Tomi Design has given us a glimpse of what the Mercedes-AMG A45 Sedan might look like.

Taking design cues from the current generation AMG CLA 45, X-Tomi’s AMG A45 Sedan sports the usual AMG details such as beefier front and rear bumpers, side skirts, side canards and chiselled bonnet.

Power is expected to come from AMG’s new turbocharged 2.0-litre engine that will reportedly make over close to 298kW or 400hp. It will be mated to the next generation 4Matic all-wheel-drive system. This same powertrain will also propel the upcoming AMG A 45 and CLA 45.

The slew of new AMG models are expected to arrive in late 2019.