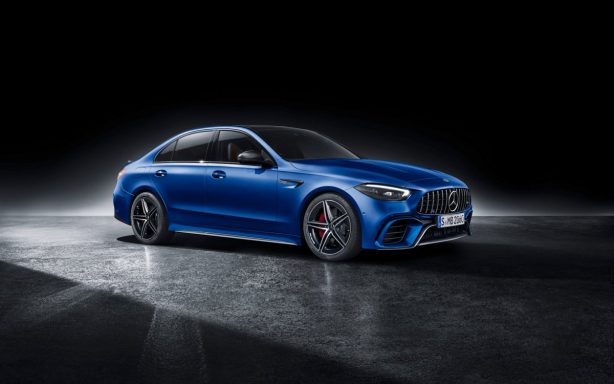 The next-generation Mercedes-AMG C63 S will lose its sonorous V8 engine that has powered the high-performance sedan since the 2005 W203 C55, and become the C63e S. As you would guess from its name, taking its place is a hybridised engine but with only half the cylinders!

Closely related to the M139 engine currently found under the bonnet of the smaller A45 S, the turbocharged four-cylinder in the C63e S will however, be rotated 90-degrees to a longitudinal position and tuned to produce 350kW – 40kW more than the A45 S.

But unlike the A45 S’ conventional turbocharger, the C63e S’ engine will be assisted by a F1-derived lag-free turbocharger with an inbuilt 6kW e-motor similar to the one fitted to the AMG One hypercar.

Destined to be the most potent four-pot in the world, the engine is connected to a nine-speed wet-clutch dual-clutch transmission, directing power to all four wheels. The car’s rear axle also features an electronically locking diff and 150kW/320Nm electric motor that spins to a lofty 13,500rpm and utilises a two-speed transmission, with the higher gear kicking in at 140km/h.

While no performance figures have been released, combined output could potentially be around 420kW/800Nm, with a 0-100km/h dash in the region of low 3.0 seconds.

The electric motor draws power from a liquid cooled 6.1kWh lithium-ion battery that is said to offer double the power density of conventional hybrid batteries.

Mercedes-AMG hasn’t revealed the plug-in hybrid’s electric-only range but confirmed that they are prioritising performance over range in this application, with pure EV mode available up to 130km/h.

There will be four stages of brake regeneration, with the most aggressive version generating an impressive 90kW. It will come with six drive modes – Electric, Comfort, Sport, Sport Plus, Race and Individual, as well as torque vectoring on both axles and brake-by-wire. Like cross-town rival, the BMW M5, expect a rear-drive only drift mode to be offered, too.

Like the rest of the W206 C-Class range, the C63e is larger in all directions, with overall length increased by 65mm, wheelbase up by 25mm and width increasing by 10mm.

The new-generation C63 is expected to arrive in Australia in early 2023.