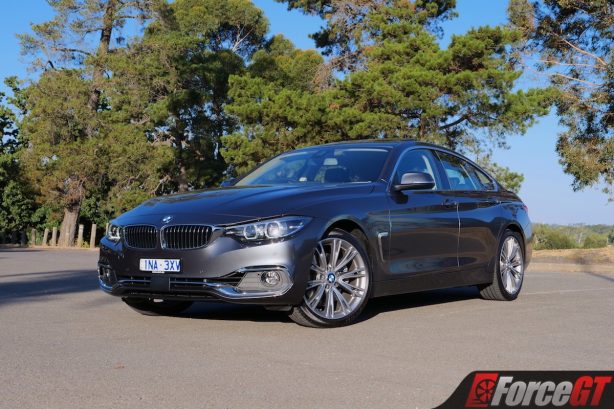 The first-generation F30-based BMW 4 Series is a car that’s certainly had a very good innings, but it’s one that’s soon to come to an end. First released in 2013 as a way of separating the 3 Series Coupe and Convertible models from the standard 3er Sedan, the 4 Series line also introduced a new four-door coupe variant to the range – the Gran Coupé, internally known as the F36.

But with the all-new G20 3 Series having just launched, the ageing 4 Series will likely be replaced with a second-gen model based on the G20 platform by the end of this year or the start of the new decade.

So when BMW offered the chance to spend some time with the 430i Gran Coupé LCI you see here, I was keen to recap just how good these F30 platform cars were before the all-new model comes along in the near future to compete with its younger rivals – the Audi A5 Sportback, Volkswagen Arteon, and the potentially titan-toppling Kia Stinger. 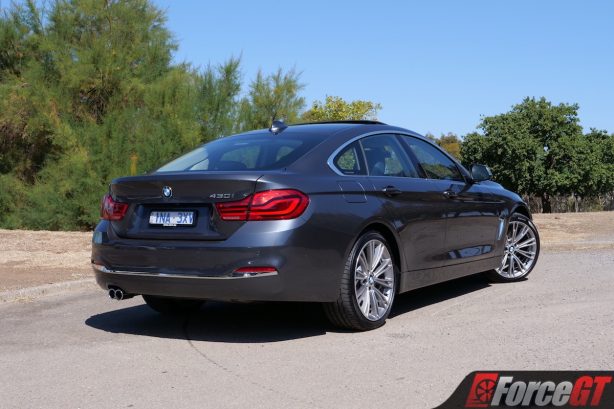 First, the basics. Intended to be a more stylish but also more practical alternative to the conventional 3 Series Sedan, the 4 Series Gran Coupé is just that thanks to its sleek coupe-like proportions and big rear hatch, and with it measuring in at just 1,389mm in height but 4,638mm in length, sleek almost seems to be an understatement.

There’s no denying it’s one very attractive car, if suffering a little due to its looks as is normal for all ‘liftback’ designs like this. If you’re long in the leg like I am, you’ll find the B-pillar to be just a little too far forward when it comes to sideways visibility and blind-spot checks, while ingress and egress for the rear seats is limited by its tight rear proportions due to the sloping roofline. Still, I found there to be more headroom in the back than in the Kia Stinger, although legroom is definitely at a premium.

The driving position is undeniably excellent, however, and exactly what you’d hope for in a car like this – it’s low-slung with supportive seats that offer adjustable side bolsters for a real body-hugging feel, while all the controls are as driver-focused as you’d expect in a Beemer. 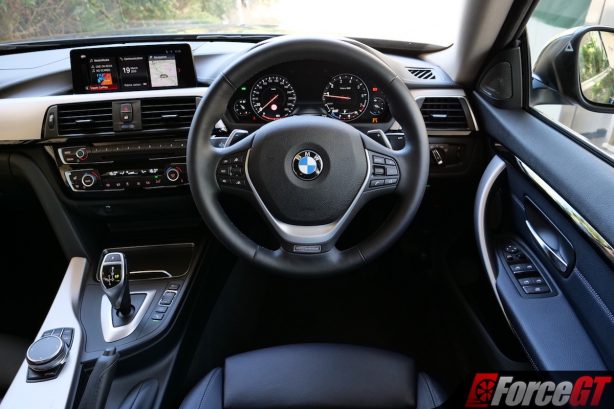 While I’ve heard some complaints about there being too many menus to go through on it, I personally think it’s a great system as the most important functions are all incredibly easy to find, and I also like the ease of use for the well-positioned rotary dial controller with a touchpad on top for writing in navigation addresses, and the inclusion of enough quick-select buttons around it. Plus, all those menus just aid with personalising the infotainment system and functions of the car to each owners’ preferences.

The most notable inclusion for the new infotainment system, however, is the addition of wireless Apple CarPlay which worked quickly and flawlessly. There are two drawbacks to the system though – for one, it’ll drain your phone’s battery rapidly, although the optional $200 wireless phone charging pad in the centre console will solve that problem; and also, it requires paying either a subscription fee of $179 to access it for 12 months or $479 for 36 months, while unlimited usage is available at a hefty charge of $639. 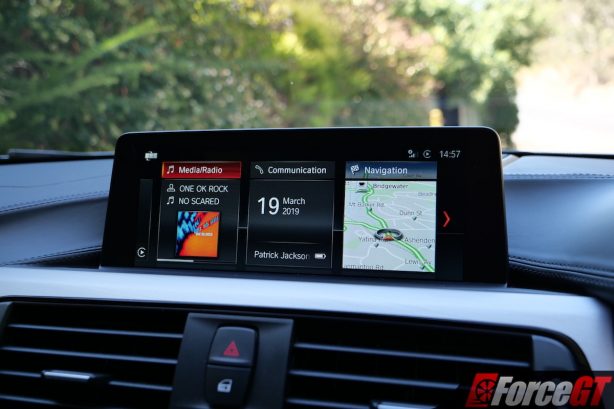 Additionally, our tester came equipped with the Luxury Line package, which is available at no extra cost, that adds ‘Dakota’ leather upholstery, metal treadplates, chome exterior highlights, and the 19-inch BMW Individual alloy wheels clad in run-flat Pirelli P Zero tyres. This package also adds a ‘Walknappa’ leather-wrapped instrument binnacle and dashboard, which brings us nicely onto the topic of interior materials. In short, they’re all absolutely excellent, with not a single offensive surface anywhere. Most things are leather-wrapped, but even the plastics manage to feel premium and high-quality.

Also worth noting is that other items such as the head-up display, powered tailgate, Surround View camera system, and even DAB+ digital radio are all included as standard on all 430i models – impressive considering many rival companies charge extra for similar features. 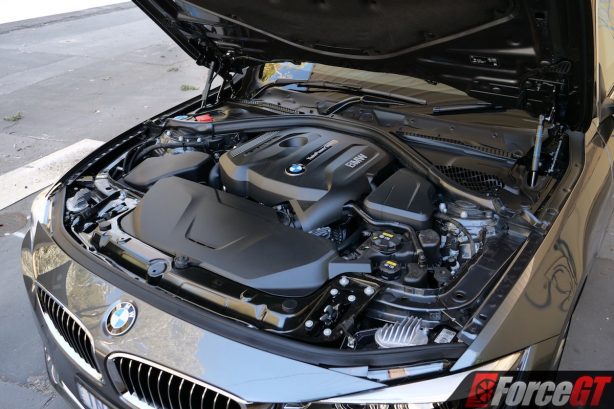 Under the bonnet of our mid-tier 430i tester is a 2.0-litre turbocharged four-cylinder producing 185kW and 350Nm, which is paired to a ZF8HP eight-speed automatic transmission and rear-wheel drive as standard, helping it get from 0-100km/h in 5.9 seconds.

Fuel economy is cited at a shockingly frugal 5.8L/100km, but don’t expect to see anywhere near that in the real world. After 740km of mixed driving, the best we could manage was an indicated 9.3L/100km.

Also worth noting is that the 4 Series Gran Coupé is also available with a less-powerful version of the same engine in the 420i, and a 3.0-litre turbocharged straight-six in the 440i. 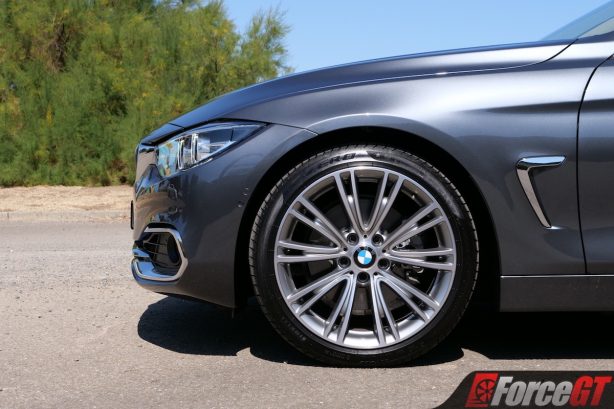 It’s on the road that the 4er impresses most, much like it did from the get-go, with it not feeling at all like the six-year-old car it is. Certainly, in terms of power we’ve not come any further than what this 2.0-litre makes, with many rivals simply matching it, rather than bettering it.

The amount of power it has is right on the money for a car of this size and weight, too, as its strong power-to-weight ratio ensures that it feels punchy and athletic. It climbs onto the boost quickly thanks to its twin-scroll turbocharger, with peak torque being delivered at just 1,250rpm. It sounds good as well, with a nice bark to it in Sport+ and some pops and crackles on overrun.

What’s the most impressive component of the drivetrain, however, is that ZF-sourced eight-speed transmission and BMW’s programming of it. It truly never misses a beat, with every shift feeling predictable and warranted – you’d almost think it was telepathically controlled with how on the money it is. 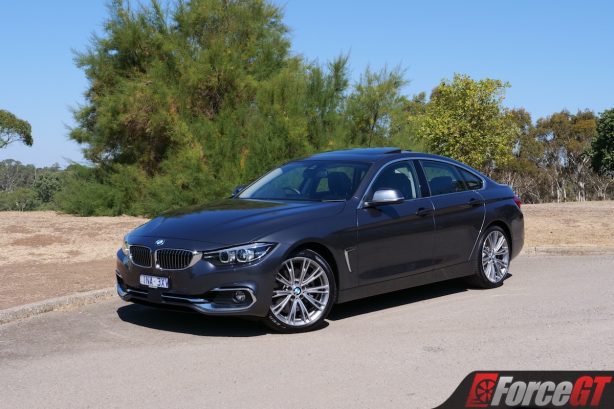 Taking control of it yourself using the steering wheel-mounted paddles reveals that its shifts are almost dual-clutch quick when you tell it what to do. Combine that with some of the most responsive and precise electric power steering out there and you really do feel fully in control of what’s going on.

With its standard M Sport suspension, it remains very composed through the bends, too, carving its line flatly and with precision. And of course, this being rear-wheel drive, it’ll happily let you indulge in some easy-to-manage oversteer despite the lack of a limited-slip differential.

But tone-down your driving a touch and the ride is compliant and comfortable, if erring on the side of firmness, and the engine feels muted and relaxed. Seemingly then, this thing continues to tick practically all of the boxes. 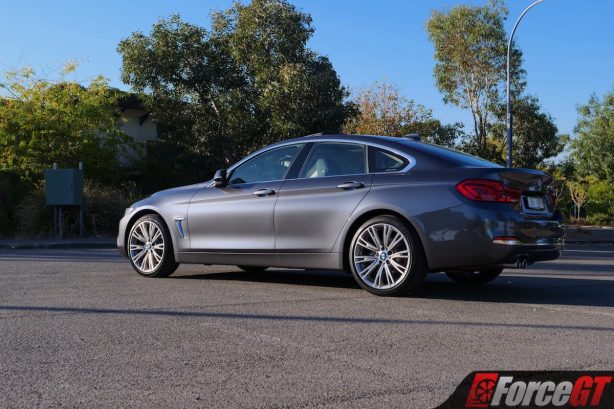 Its days may be numbered, but six years on the 4 Series Gran Coupe still feels as fresh as ever from behind the wheel. Its drivetrain is perfectly-sorted, the chassis tuning is spot on, and it’s all wrapped up in one very good looking body.

With it likely to be replaced before too long, you may be able to use that as a way of haggling on the price, but if you don’t mind buying something that won’t be “the latest” in a year or so’s time, it’s well worth considering one of the F30-based 4 Series models while you can still get them.

The time spent with this also helped to remind me just how much I look forward to sampling the next generation of 3 and 4 Series models based on the new G20 platform, too.