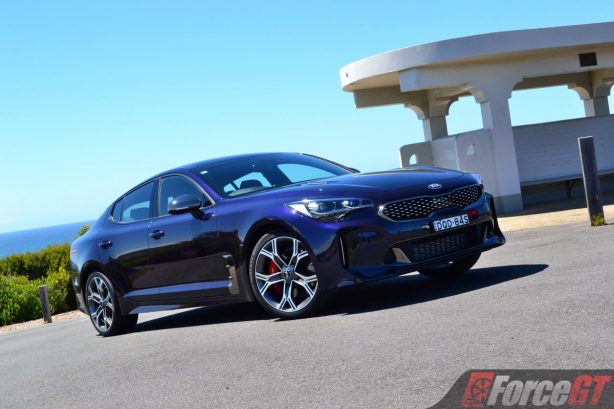 Rear-wheel drive, twin turbocharged V6 engine, spacious seating for five adults and an interior that rivals top premium brands, all for under sixty grand? Yes, it exists. And it’s the long-awaited Kia Stinger.

It’s the Korean brand’s first ever sports sedan and what a commendable effort. If you’re like me, who have never looked at a Kia if performance was a criteria, the Stinger is going to change that. But even taking the driving part out of the picture, the Stinger has an element of desirability that is quite uncommon in this segment and it has a lot to do with the way it looks. It sits purposefully low and wide, fused by sculpted surfaces, bold lines and powerful rear haunches. The large wheel arches are filled by 19-inch alloys (in GT variant) which are striking to look at, though I’m not a fan of the simulated single-nut center caps.

There may be a whiff of Jaguar XF around the front and a hint of Maserati Quattroporte at the back, overall the Stinger is a great looking sedan with nearly perfect proportions. 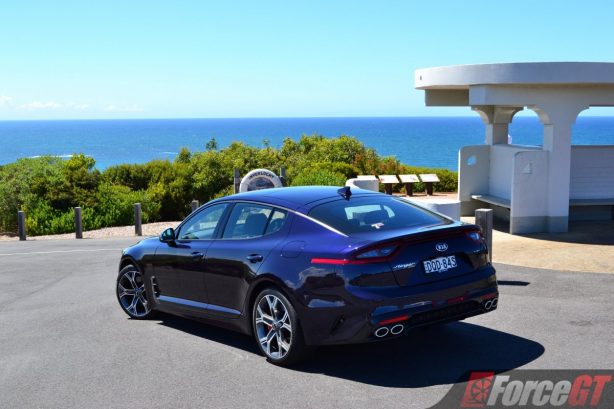 Kia says all aerodynamic bits are functional, such as the intakes on each side of the front bumper which serve to reduce wake turbulence by letting air into the front wheel arches and venting it through the side vents behind the front fenders. Air also flows uninterrupted over the sweeping roof and breaks away cleanly from the ‘ducktail’ shape rear deck. Elsewhere, the partially flat underfloor cover which flows into the rear diffuser reduces drag under the car for optimum high speed stability.

It’s a slippery design for sure, as evident by the impressively quiet cabin and lack of wind and road noise at three-digit speeds. 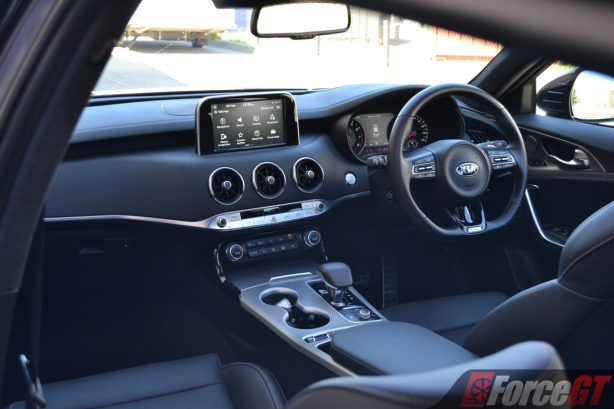 Interior execution is the best I have seen from this company. The dashboard design is a mix of elegance and sport, the former highlighted by the single continuous piece of satin chrome trim insert that also frames the infotainment controls while the latter is emphasised by the trio of aeronautically inspired spoked circular air con vents.

The rest of the cabin is just as well sorted, with most contact areas adorned in soft-to-the-touch surfaces, headliner covered in dark suede (GT variant) and upper door cards and center stack trimmed in brushed aluminium pieces. The hand-stitched leather-wrapped steering wheel feels high quality though I’d prefer the rim to be a little thicker.

There’s space for five adults and while three can sit quite comfortably across the back seats, don’t expect Camry or Commodore level of rear legroom and headroom. The coupe-like sloping roof line also makes rear ingress and egress rather tricky for tall passengers. Being rear-wheel drive, there’s no escaping the bulky driveshaft tunnel robbing precious legroom for the rear middle passenger. 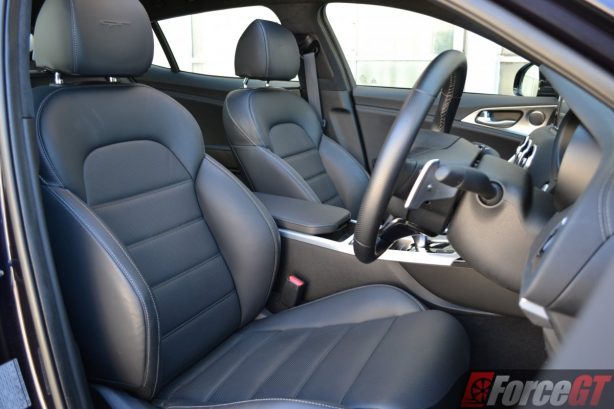 While it does feel properly premium inside, it’s also not without its flaws. The satin chrome infotainment buttons glare under direct sunlight, the thick B pillars can obscure an entire bus and the door grab is positioned too close to the side mirror fold buttons, often causing accidental activation. Slight squeaking of cabin rubber seals was also noticeable in all three Stinger test cars I drove. And I just don’t get the rationale behind making the two center cup holders in front different in size.

Nevertheless, all this will quickly diminish in the back of your head once you get behind the wheel and start driving. The 3.3-litre twin-turbo V6 petrol unit boasts luxury level of refinement unmatched by any car in this class – it ought to be as it also powers the Genesis G70 luxury sedan. Driving through the silky smooth eight-speed automatic transmission, the Stinger delivers a wonderfully relaxing and effortless drive both in urban and country setting.

With turbos strapped to both sides of the V6, throttle response is nowhere near as sharp as an atmospheric V8, but there is very little lag and the chubby torque band offers savage mid-range punch, making overtaking an absolute breeze. 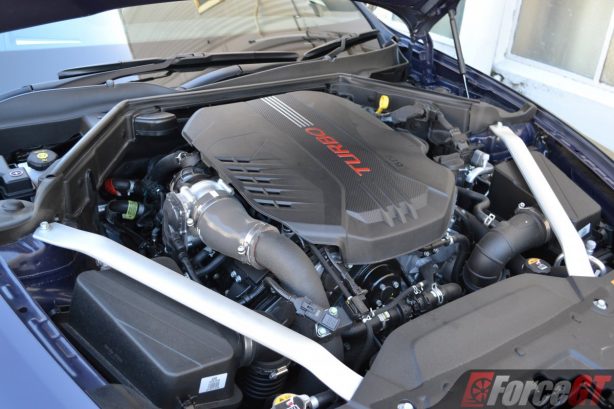 A grand tourer by design and intention, the Stinger is most at home cruising scenic coastal routes or eating up the miles in a long-leg interstate drive. Ride quality from those adaptive dampers is impressive. Supple and well damped in Comfort mode, the large sedan soaks up bumps and ruts with aplomb while still maintaining a level of firmness for that connected feel.

For keener drivers, the Stinger can still be heaps of fun around twisty back roads. Flick the drive mode into Sport, the dampers firm up, the throttle response sharpens and the gearshift becomes more aggressive. Turn-in is eager through the relatively quick steering which offers good feedback once lock is wound. The crisp front end is combined with grippy Continental rubber to keep the car in its intended line.

Despite its heft and large dimensions, the Stinger feels surprisingly agile and light on its feet through corners. Even more impressive is just how throttle adjustable and playful the Kia can be, aided largely by one of the most well calibrated and non-intrusive traction control systems I have tested. In Sport, the electronic driving aids allow the rear to step out just a little under a slab of throttle, only intervening in full guard just before things get out of control. Turn the watchdog off and the Stinger will play hooligan all day long, BMW M style. 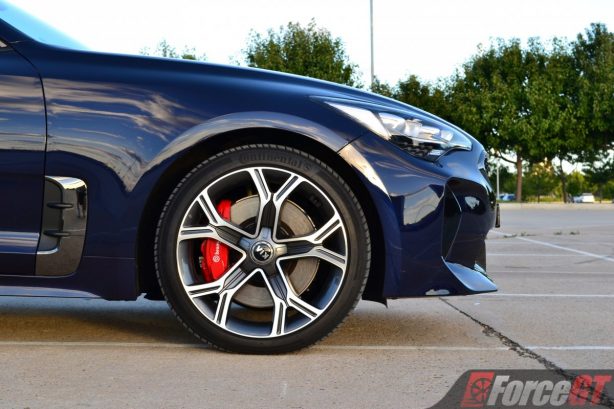 The brakes – 4 pots Brembo at the front and 2 pots at the rear – are strong and delightfully progressive, though I find more effort than usual is required to overcome pedal resistance to keep the car stationary when the gear is in Drive.

There’s room for improvement elsewhere, too. The Stinger can feel twitchy on the limit, snapping and pushing wide without much warning when carrying too much speed into a bend. The suspension can take awhile to settle over mid corner bumps, disrupting its balance. For the GT model, at least, the gearshifts can be snappier in Sport. And lastly, a little more noise from the exhaust will truly give the Stinger a whole new character.

But as a cruiser, the Stinger is very, very accomplished, setting a new benchmark in the segment. 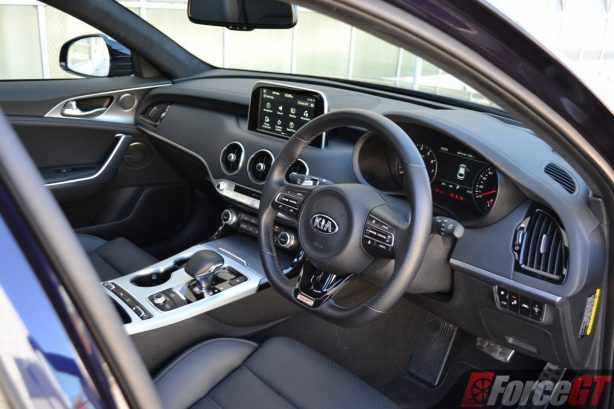 Setting the GT apart from the rest of the Stinger line-up are a range of external cues including electrochromic door mirrors, LED headlights, powered sunroof and two bespoke colours – Aurora Black and Snow White Pearl.

Nappa leather upholstery is standard on the inside, as is powered bolster adjuster and thigh extender for the front seats, alloy sports pedal and wireless phone charging.

The Kia Stinger GT is an impressively accomplished sports tourer with sharp pricing to match. It combines good looks with quality and refinement. Top that with generous equipment and the ability to entertain, the Stinger really does have the power to surprise.

Previous How To: Car Interior Detailing
Next Would you like BMW to build this luxury ute?