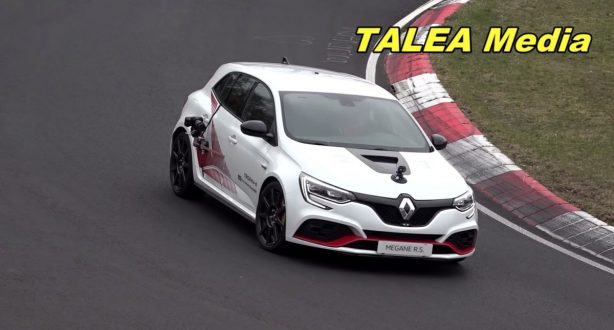 Renault’s upcoming Megane R.S Trophy-R has been caught pounding the Nürburgring on a film shoot presumably for its impending release.

Published by Talea Media, the video captures the Megane R.S Trophy-R on the famous German track tailed by a camera car before launching itself in full attack mode.

Like its predecessor, the hardcore Trophy-R is a track-focused weapon. That means instead of rear seats, the hot hatch comes complete with a roll cage, stickier low-profile tyres, as well as upgrade brakes with perforated front discs.

In order to feed more air into the turbocharged 1.8-litre four-cylinder petrol engine, the hot hatch also drops its trademark multi-reflector LED lights in the bumper for a pair of air intakes.

The video also reveals the upcoming Trophy-R will feature a black bonnet scoop, “Trophy-R” lettering and graphics on the doors, an F1-inspired red wing in the front bumper, along with black alloy wheels.

We are not sure if Renaultsport will tweak the Trophy-R’s engine to churn out more power at this stage. For reference, the Megane R.S Trophy pumps out 221kW and 400Nm of torque. 0 to 100km/h is done in 5.7 seconds before reaching a top speed of 260km/h. However, with lower weight and other performance mods, the Trophy-R is likely to be faster even without the additional horsepower.