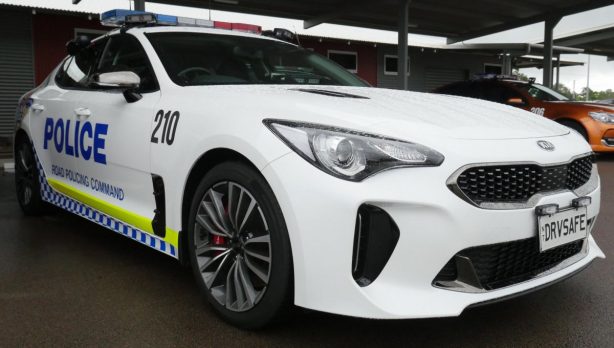 The Northern Territory has become the third Australian police jurisdiction to select the Kia Stinger as its front-line road traffic policing vehicle.

Following in the footsteps of Queensland and Western Australia, the Territory today introduced the first of the high performance twin-turbo V6 Stingers tasked with leading the way on road safety as the aging Holden Commodore SS fleet is phased out.

The Road Policing Command will take possession of seven Kia Stingers to progressively replace all Commodores currently in operation.

Commander Matt Hollamby, from the Road Policing Command, said the Stinger was trialed in the NT and found to be a suitable replacement.

“Holdens and Fords have been standard road policing vehicles in the NT for the best part of 50 years but now that they are not manufactured, it’s time for us to look at an alternative,” he said.

“We needed a car capable of operating at reasonably high speeds in temperatures of 45 degrees in the shade without missing a beat. The Stinger showed itself to be that car.”

Kia Motors Australia Chief Operating Officer, Damien Meredith, said the decision by the Northern Territory Government to add the Stinger to the official police fleet was further endorsement of the brand in Australia.

“It is extremely pleasing that once again a state government has had the vision to look past ingrained prejudices and give a stamp of approval to the best available option,” Mr Meredith said.

“The Stinger is not only an outstanding performance vehicle but is backed by Kia’s industry-leading ownership experience, whether that be for private, government or fleet buyers.”

Commander Hollamby said that the new fleet of Stingers may not at first be immediately recognisable because of a redesign of the decals on the vehicles.

“The aesthetic of our decals hasn’t changed much in the past 15 years and we thought now was a better time than any to update those as well,” Commander Hollamby said.

“Members in the Road Policing Command provided input into alternative options and selected the preferred design which was completed in-house. Territorians can expect to see the new police vehicles out on the road from today.” 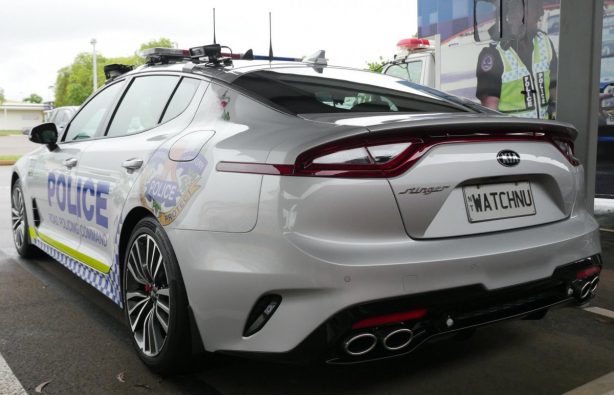 The new Stingers will highlight the Road Policing Command’s Easter safety campaign with a focus on speed, alcohol, driver distraction and seat belt use with a special focus on rural roads.

“We have recently established the Road Policing and Regional Support Command which includes all traffic operations units throughout the Northern Territory,” Commander Hollamby said

“Units in Darwin, Katherine and Alice Springs are now operating in a more coordinated and streamlined way with the aim of improving road safety.”