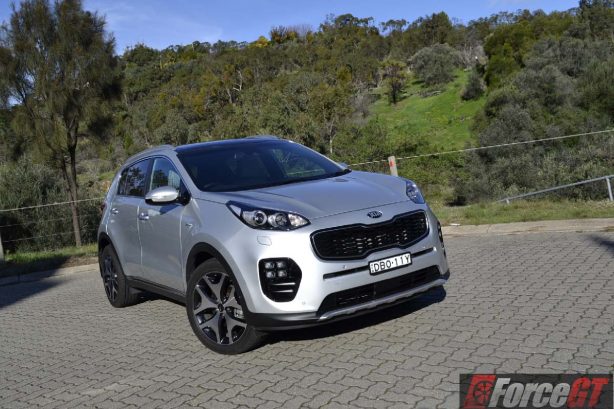 The superseded Kia Sportage was one of the first Kia models penned under automotive design superstar, Peter Schreyer after being lured across to the Korean brand from Audi. The stylish SUV went on to become Kia’s top selling model.

Since then, every new model that came after it has raised the bar a little, not just in terms of styling, but also in built quality and handling.

Today, Kia’s are no longer the cheap and nasty econoboxes they once were. While value is still the core ingredient built into every Kia, nastiness has long been banished from the Korean brand’s lexicon.

These days, we expect Kia vehicles to not only look great but drive well and last a million years.

Cue the fourth-generation 2016 Kia Sportage. After a series of major hits (Sorento and Carnival), the pressure to perform has never been greater on Kia’s new mid-size SUV.

Its svelte new design and more ambitious pricing – which starts from $28,990 plus ORC, representing a $3,500 jump from the old model, and is $1,000 dearer than sister brand’s Hyundai Tucson – highlights Kia’s gradual push upmarket.

Our range-topping Platinum diesel test car book ends the lineup at $45,990 plus ORC.

Is technology and swanky design enough to justify the premium? Let’s find out… 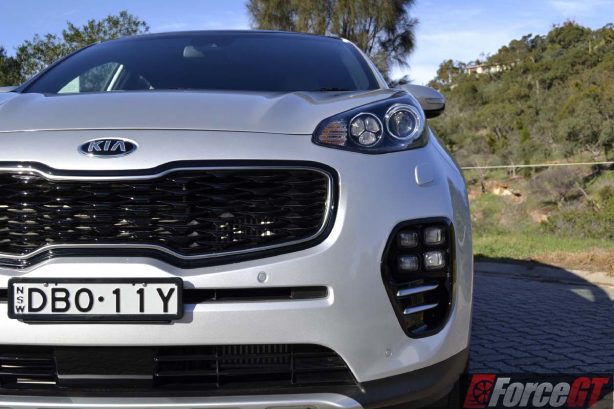 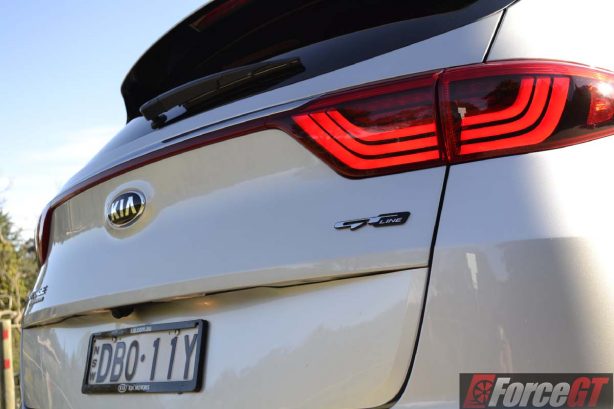 The first thing that strikes you about the new Sportage is its new face. While it’s far from unattractive, we’re not sure if we like its imposing new look, as the headlights remind us too much of the quirky Nissan Juke.

Thankfully, apart from the confused front fascia, the rest of the car is more pleasing to look at.

If the exterior was a bit of a hit and miss, the interior bears no such slip-up. 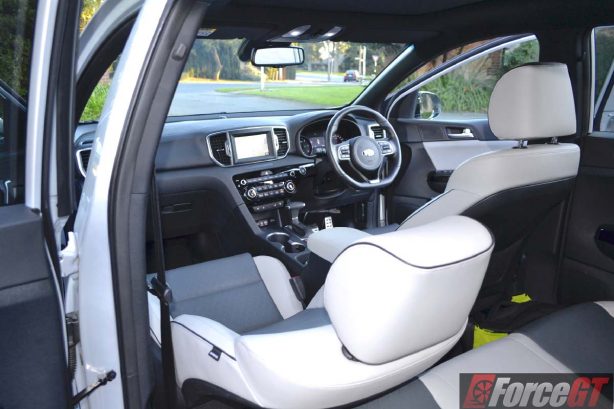 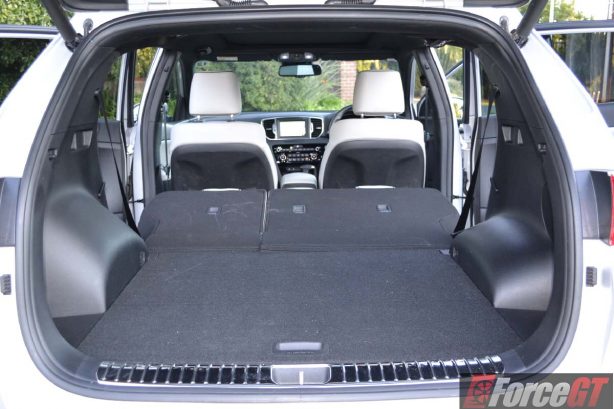 There is noticeable improvement in its presentation as well as perceived quality, although not quite up to the Sorento’s impressive standard.

The dashboard design is simple yet ergonomically sound, while the sporty flat-bottom steering wheel (GT Line exclusive) is not only great to look at but also good to hold with a chunky wheel rim.

Kia has also done a great job in cheering up the otherwise gloomy interior with classy cream leather upholstery.

Kia’s promise of increased head and leg room in both rows have also been delivered, with the second row seats feeling particularly roomy. While the boot space is largely unchanged at 466 litres, its expanded volume has increased from 740 litres to 798 litres.

And thanks to extra sound insulation, new bushings in the rear suspension and a thicker windscreen, road and wind noise have been reduced compared to the old model. 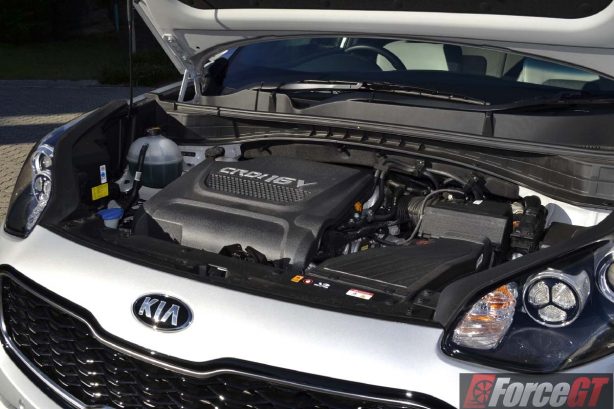 The Platinum’s 2.0-litre four-cylinder turbodiesel produces slightly more power than before, developing 136kW at 4,000rpm and 400Nm at 1,750-2,750rpm. It is married to a smooth shifting 6-speed automatic transmission that sends power to all four wheels.

Around town, the engine is relatively quiet and goes around its business without much fanfare. Power delivery is surprisingly linear, too, with no noticeable turbo lag, increasing drivability tremendously.

Hit the corners and the gearbox will diligently drop a gear to ensure you exit the bend smoothly. Recent Kia’s have all been tidy handlers (thanks to extensive Australian-specific ride and handling chassis tuning) and the Sportage is no difference.

The all-new platform is made of more than 50 percent advanced high-strength steel and is 39 percent more rigid than the old car.

Like the 2010 model, the new Sportage features front struts suspension and multi-link rear but tweaked in several areas to improve ride quality and deliver a sharper handling. 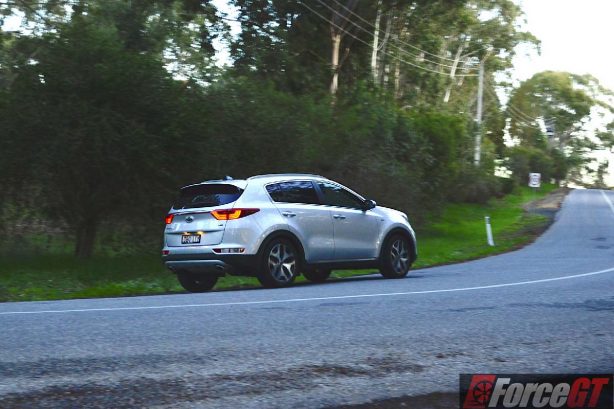 Modifications include revised bushing mount positions for greater stability and more natural responses to changing road surfaces, as well as stiffer wheel bearings and bushings for a more direct handling and greater stability.

The biggest change though, is in the electromechanical power steering system, which is now mounted directly onto the steering rack rather than onto the column, for better stiffness and response.

The overall result is one of the most agile crossovers in its class, with handling that is relatively precise and confident, helped by an effective all-wheel drive system. There is still some body roll due to its higher centre of gravity, but not enough to feel unsettled. The firmer suspension has also delivered much greater high-speed stability than the previous model.

What hasn’t worked so well is the new power steering system, which confuses weight and apparent friction as genuine feedback, while the brakes feels spongy and doesn’t bite hard enough. 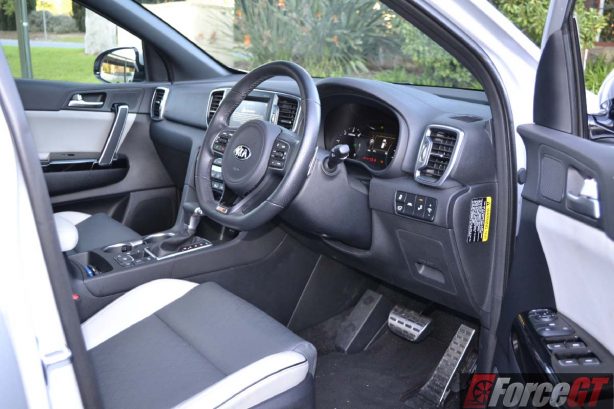 There is no arguing Korean cars these days are as good as, if not better, than their equivalent Japanese or European counterparts.

Fit and finish in the latest Sportage is faultless, with a hefty and robust feel to all switchgear. The doors open and shut with a suitably sturdy feel, too.

With a 62 litre fuel tank – 4 litres more than before – the Sportage should yield an approximately cruising range of at least 689km in the real world. 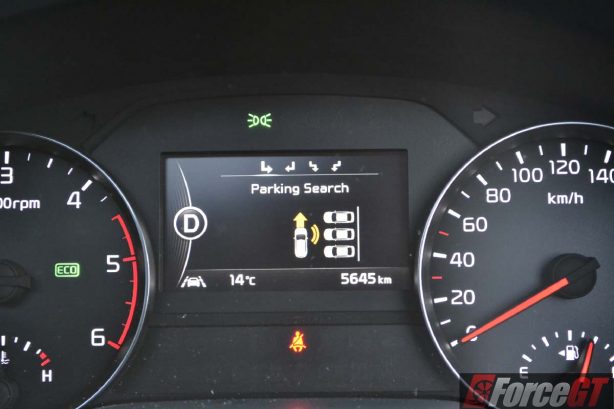 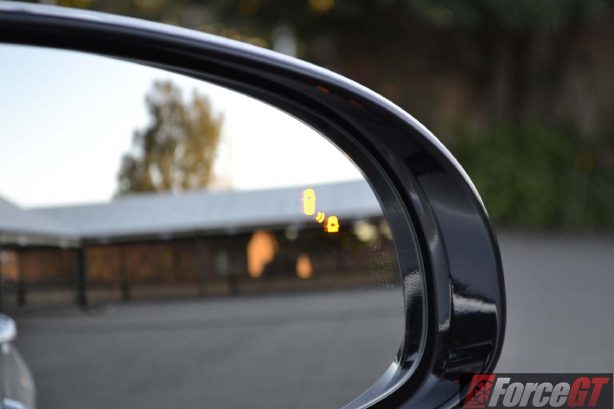 Kia’s have traditionally been rather well equipped and we are pleased to report the new model packs even more equipment.

The Platinum model adds Autonomous Emergency Braking (AEB) and Forward Collision Warning, which employs a radar detection system to detect a potential collision with another vehicle or pedestrian and help bring the car to a halt; Lane Departure Warning System, Blind Spot Detection and Lane Change Assist. It also gains High Beam Assist, which detects approaching vehicles and automatically dips the headlights from high to low beam, Park Assist and an electric sunroof with electric sunblind.

We also like its auto tailgate, which activates by standing behind it for around 3 seconds with the key in your pocket – no silly waving of foot required!

The 2016 Kia Sportage has certainly improved on the old model’s successful formula of being stylish, practical and generously equipped.

It’s ride and handling has matured even further, while materials and equipment is nearly as sophisticated as its Japanese and European counterparts.

However, with a higher entry price, we expect AEB and Forward Collision Warning to be standard across the range and not confined to the range-topper.

Still, we suggest you put the Sportage high on your shopping list.