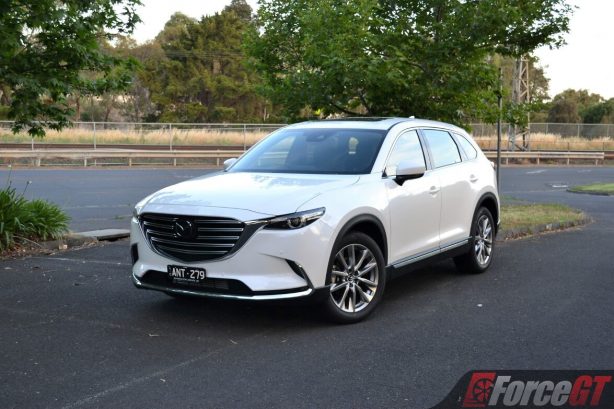 It’s already been a year since the new generation Mazda CX-9 has hit the roads and it continues to be a strong seller. Not willing to rest their laurels Mazda has taken note of criticism (not that it has many) and further honed their seven seater SUV to meet buyers’ needs.

Improving an already impressive package is no easy task but Mazda has managed to pull off a remarkable update to further strengthen the CX-9’s position as our top pick in the full-size crossover segment. Whether you have overbred or are just merely looking for more cargo space, the CX-9 is still the best family SUV you can buy for under $65k and here are 7 reasons why.

The Mazda CX-9 is a solid proof that you don’t need to splash over six figures for prestige styling, for it’s not just the best looking SUV in its class but it’s also a big middle finger salute to luxury SUVs from Jaguar, BMW and Mercedes-Benz.

Just take a look at it. The curves, the lines and the proportions are spot on, there just isn’t a single bad angle about the car. There is no shortage of fine details either, like the beautifully crafted grille, the polished chrome garnish in the lower front and rear bumpers, and the striking design of the daytime running lights in our range-topping CX-9 Azami test car. In the upper spec variants, the CX-9 can easily flirt with premium cars costing twice as much. 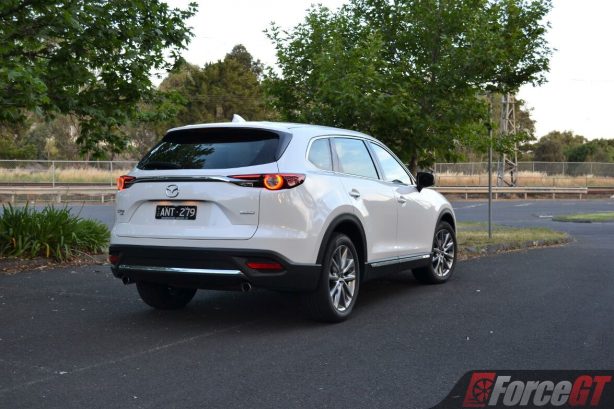 If the exterior has managed to impress us, then the interior has simply blown us away. The entire look and feel of the cabin speak of top-class luxury. Soft to touch surfaces adorn the upper dashboard and door trim, lifted by premium glossy trim in the lower centre console and lavish leather upholstery. There’s also a sweeping single piece of aluminum across the dashboard, emphasizing width.

The cabin is impeccably well put together, with faultless fit and finish and a tactile feel to all switches, buttons and knobs. In fact, it would come as a surprise to many that this cabin belongs to a car costing just sixty grand.

3. One Hell of a Powertrain

The newly developed 2.5-litre direct-injection turbocharged petrol engine that powers the entire range is an absolute gem. Replacing the old atmospheric 3.7-litre V6 in the last generation CX-9, its output of 170kW is down from the previous 204kW but there’s more torque, 420Nm compared to just 367Nm from before. And trust me, you won’t miss the old V6. This new powerplant is probably the best four-cylinder turbo engine out there, delivering diesel-like grunt with ultimate refinement and response.

Its maximum torque is now accessible much lower in the rev range, at 2,000rpm, giving the large SUV much better driveability around town. The stronger mid range also allows for swift overtaking on open roads. At one stage of our road test, we literally put the CX-9 through its spaces with 7 adults on board and a boot full of luggage and items. Yet, the trustable Mazda was more than capable at the task, not missing a single beat, even when going up hill. 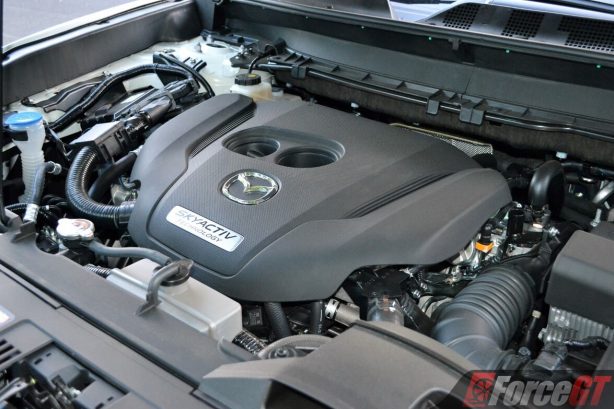 The six-speed automatic that pairs the engine delivers silky smooth shifts with near twin-clutch level of speed and efficiency. Together, the new powertrain serves up luxury levels of refinement that you just can’t get in any other cars in the segment. It’s economical, too, averaging a respectable 10.8L/100km over 800km of real world driving with a full load and the air con always working hard to keep out the Australian summer heat. Even better, it needs just 91 Octane fuel.

At 5065mm long, the new CX-9 is 30mm shorter than its predecessor, but its wheelbase has been stretched 55mm, benefiting rear passenger legroom as well as entry to and exit from the rear.

The front row seats are very comfortable though a little more thigh support will be appreciated. Three adults can get into the middle bench without getting too intimate, while another two can still make themselves comfortable in the plush third row seats that are far from being designed for children only. Having said that, one notable oversight is the lack of air con vents in the third row.

Efforts have been undertaken for 2018 to improve rear seat access and usability. The second row of seats now lean further forward granting easier access to the rear and take less effort to both lean and shift forwards. The second row of outer seats now gain two ISOFIX mounting points while the rear two seats feature a second top tether point allowing child and booster seats to be fitted. For the GT and Azami models the outer seats in the second row are now also heated.

Up front drivers can enjoy additional comfort thanks to a new tilt function that adjusts the height of the cushion’s front edge and all power seat controls are available with an upmarket chrome-like finish. 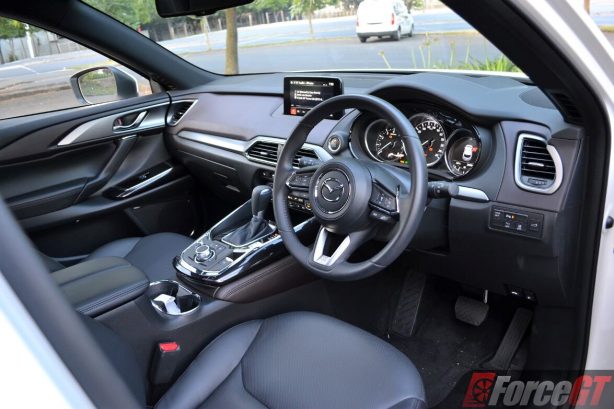 The electric tailgate our CX-9 Azami test car opens up into a 230-litre boot space with the third row up. When not in used, the third row tumbles down with the headrests folding neatly away to form a flat boot floor, producing 810 litres of space and a 1,282mm long load floor. Folding down the second row of seats further expands the space to 1,641 litres. Measuring 2,158mm long and 1,489mm wide, the liberated space is enough to swallow a pair of mountain bikes.

The CX-9 has premium level of silkiness and quietness, even if you send the revs up high. It’s quiet on the freeway, quiet around town, quiet on start up, it is literally as quiet as a Lexus RX. The 2018 update brings an even more refined and quieter driving experience thanks to further cabin enhancements and insulation that reduce wind and road noise.

Despite tipping the scales at nearly 2-tonne, the big CX-9 dashes from 0 to 100km/h in a very respectable 7.6 seconds. It never leaves the driver wanting for more power.

Some 130kg lighter than its predecessor, the new CX-9 also takes on sharper dynamics. Equipped with MacPherson struts up front and a multi-link arrangement at the back, the CX-9 feels agile for such a large vehicle and while body roll remains a companion in corners – as expected from a high riding SUV – it’s all very manageable. It responds well to steering inputs, the brakes are strong and the improved grip level from the all-wheel drive gives further assurance in all conditions. 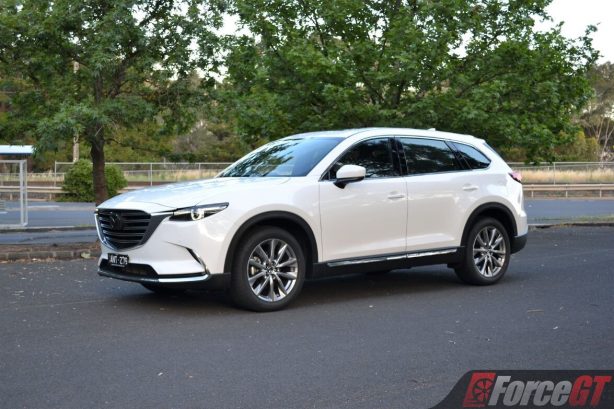 Mazda’s G-Vectoring Control now makes an appearance throughout the 2018 lineup. The technology receives various sensory inputs including steering angle and vehicle yaw rate to manipulate throttle inputs when cornering to assist with the weight transfer from the entry through to the exit of a corner. On the road, this translates to even sharper chassis and steering response, making the CX-9 feel a lot smaller to drive.

7. It Will Save Your Bacon

For 2018, Smart City Brake Support (Forward) now includes Pedestrian detection and the overall speed range has been increased from 4-30km/h to 4-80km/h. Both the GT and Azami upper range models now come with Traffic Sign Recognition by default. 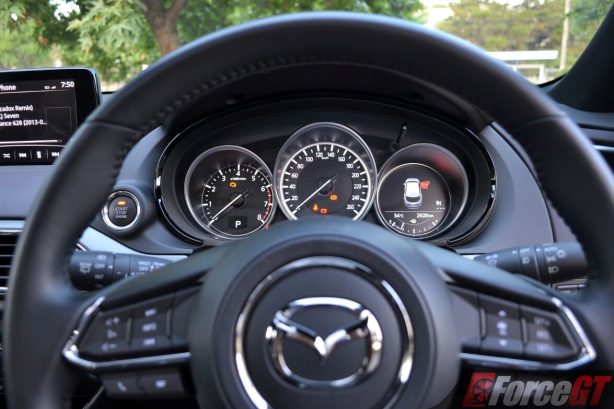 At the end of the day, the Mazda CX-9 is an Audi Q7 for half the price. Without doubt, Mazda’s latest 7-seat family SUV sets the benchmark for exterior and interior design, powertrain, quality and overall packaging.