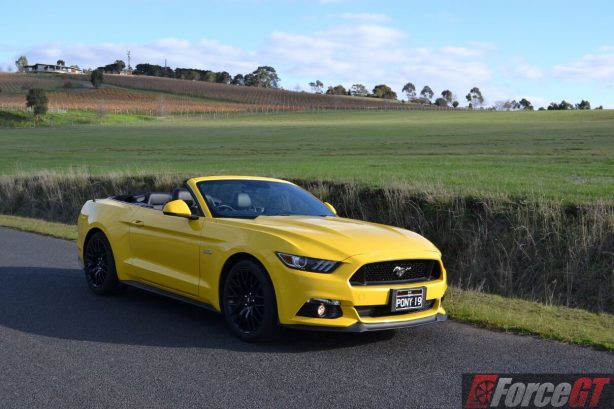 The all-new 2016 Ford Mustang GT Convertible is currently the cheapest V8-powered open-top sports car you can buy in Australia. At $63,990 plus on-roads, the pony car costs almost $100k less than the next nearest V8 cabriolet. To step up from the Mustang without losing cylinders, you’ll be looking at the circa $160k Mercedes-AMG C63 Cabriolet or Audi RS 5 Convertible. Moving up even further, the Jaguar F-Type R Convertible will set you back $250k before you’re allowed entry.

Of course, it doesn’t have the premium badge or the cachet of the Europeans, but what it does have, is bucket load of attitude and brute, raw American muscle, plus a nameplate so iconic it resonates with not just enthusiasts but also people at large, even if they’ve never driven one.

It isn’t surprising then that the Mustang had over 1,200 confirmed orders and 15,000 registered keen buyers before the car even arrived in Australia. To buy one now, you’ll have to wait until… mid 2017, we were told.

But, let’s now focus on the car. 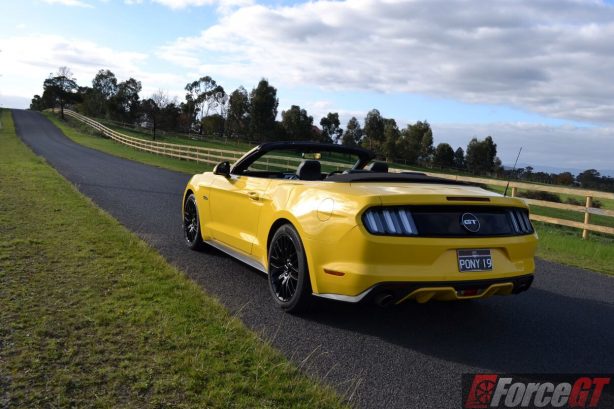 Bold, strong creases around the car and 19-inch black alloy wheels further add to its aggressive and muscular stance. 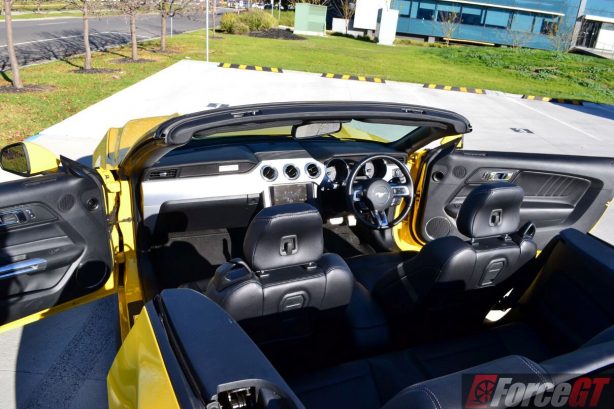 The convertible has a black retractable fabric top. To open it, all you need to do unlock the latch by hand and press a button in the cabin. The roof will fold in under 10 seconds.

With the roof closed, the convertible does present increased wind noise in the cabin compared to its $9,000 cheaper coupe sibling. The fabric roof also squeaks a little at all speeds, though its overall structure seems sturdy and rigid.

Those minor annoyances aside the cabin is a comfortable place to be in. Like the coupe, the interior is all retro and pays homage to the original 1964 Mustang. Its ambience lifted by lashings of brushed aluminium and lavish leather upholstery, though contradicted by scratchy hard plastics and budget-grade switchgear.

The heated and ventilated front sport seats provide great support and are comfortable enough for long drives, but the lack of neck heating means going topless is limited to the warmer seasons.

On the outside, you get HID headlights, LED taillights, keyless entry, heated mirrors and the super cool wing mirror projection lights that project the pony logo on the ground at night. 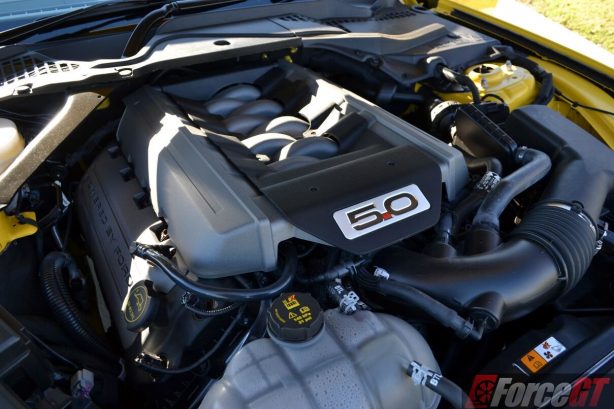 Under the bonnet of the GT is a 5.0-litre atmospheric V8 engine that produces 306kW at 6,500 rpm and 530Nm at 4,250rpm. It fires up with that unmistakeable growl that only a bent-eight is capable of, and stays throbbing even on idle.

With the roof down, the full surround sound of that majestic V8 roar when you take the mill to its red line is truly immersive.

Driving the rear wheels exclusively through a six-speed automatic transmission (there’s no manual option for the convertible), the GT sprints from 0 to 100km/h in as little as 4.8 seconds.

The V8 pulls hard through the entire rev range, delivering power and torque with silky linearity. Forward thrust is readily available as soon as you put your foot down, even at three-digit speeds.

The self-shifter is another story, however. It’s slow to shift and gear change is abrupt at times, especially from first to second gear and vice versa. Using the pedals behind the steering wheel doesn’t help much either. Shifts are delayed a second or two after you pulled a pedal, which can be frustrating at a track. 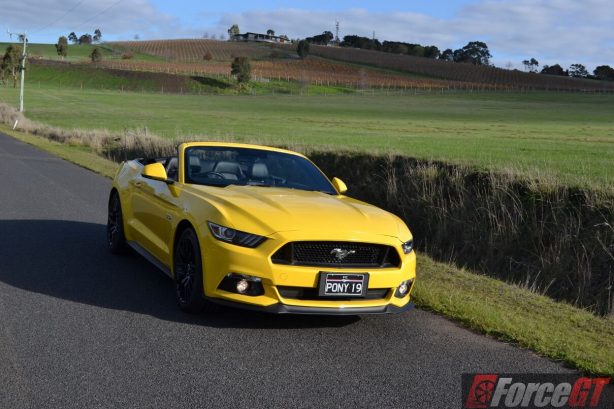 The convertible’s ride quality is noticeably firmer than the coupe, losing some of the latter’s low speed cushiness but still very grand tourer-like. More importantly though, the drop-top’s chassis feels every bit as rigid as the coupe, lending the car excellent body control and cornering flatness.

However, there’s still plenty of room for improvement in the dynamics department. Its 1.7-tonne heft aside, the nose just doesn’t point as responsively and precisely as we’d hope. You never feel the car holding it all together and in unison with you around tighter bends.

There’s still the challenge of getting power down to the tarmac, which requires a level of finesse in throttle application especially in the wet, or the rear will start to come loose (which can be a good thing for those who live life sideways).

With a potent V8 engine, countered by strong and progressive brakes, the Mustang is still great fun, though its steering can do with a bit more feedback.

Compared to the GT manual we drove recently, the automatic fared worse in the fuel economy department, recording an average of 18.7L/100km at the end of our week-long test. Its preference for 98 RON premium unleaded fuel means running cost can be expensive.

The new Ford Mustang GT Convertible isn’t the most sophisticated of all machines, but it’s hard to look past its head turning looks, genuine performance, unrivalled value proposition and strong heritage.