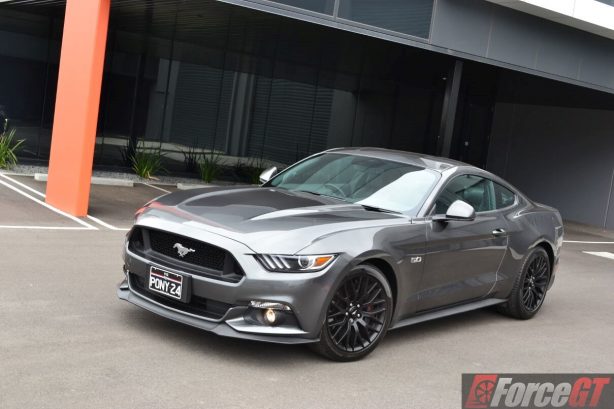 After more than 50 years, Australians can finally buy a brand new right-hand-drive Ford Mustang from a local Ford dealership with full factory warranty. It’s the first time in history the iconic pony car is sold globally and comes with its steering on the right direct from the US production line. Local conversion is finally a thing of the past!

A car made famous by dozens of movies including Fear and Gone in 60 Seconds – everyone from Sly Stallone to Farrah Fawcett has gotten around in one – the Mustang is arguably one of very few cars that resonates with not just enthusiasts but also people at large, even if they’ve never driven one.

With over 1,200 confirmed orders and 15,000 registered keen buyers before the car even arrived in Australia, the new Mustang’s overwhelming response Down Under has caught Ford by surprise. The American car maker predicted it would sell 1000 Mustangs in its first year here but the queue is now so long that even if the original allocation is quadrupled, all the cars would have been spoken for. 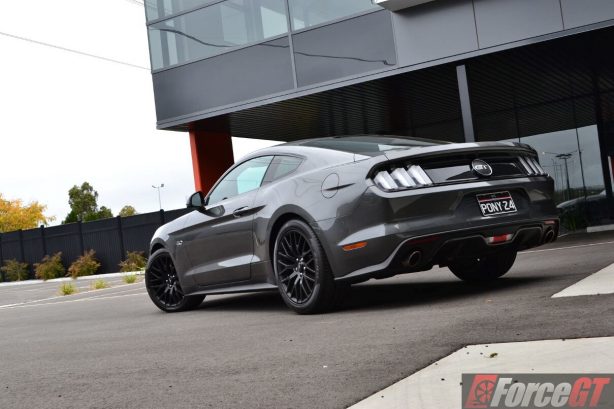 And it’s not hard to see why. The sixth-generation Mustang is priced from just $44,490 plus on-roads for the six-speed manual Fastback EcoBoost. That’s a two-door low slung sports car for about the price of a Mazda6 family sedan or Golf GTi hot hatch. Heck, it’s even cheaper than Ford’s own Mondeo.

Fans of V8 muscle will be even happier, as the Mustang GT zooms in at a salivating $54,990 plus on-roads, a price that undercuts everything from the Subaru WRX STI Premium to the Nissan 370Z.

Customers will also be able to option their Mustang I4 and GT Fastback with racing stripes and black painted roof, 19-inch Premium Wheels with Lustre Nickel finish on the GT and prestige paint. 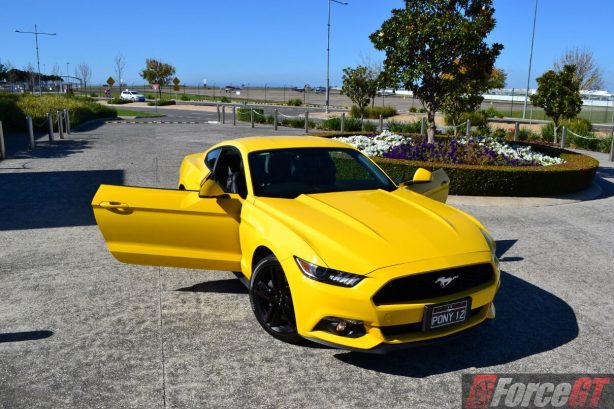 After a lengthy down period brought about by the forgettable third and fourth generation models of the 80s and 90s, this latest Mustang is finally stroking the right chord again. Turning back to the original 1964 Mustang for inspiration, the new car’s basic shape is characterised by a long, heavily chiselled bonnet, wide, forward-angled front grille, bold rear shoulder haunch and those trademark triple slotted taillights.

This car turns more head than a Ferrari. Passers-by gawk in awe, kids in SUVs stick their phones out the window to take photos of it, girlfriends and wives in passenger seats nod in approval, even taxi drivers give thumbs-ups.

Literally, no other cars in this price range get you that much positive attention.

The EcoBoost turbocharged 2.3-litre four-cylinder engine develops 233 kW from 5,600 to 5,700 rpm and 432 Nm of torque at 3,000 rpm. It’s the same engine found under the bonnet of the scorching Focus RS, but unlike how it pops and crackles in the hot hatch, the blown four feels restraint and uninspiring in the Mustang.

While the engine is potent enough to haul the coupe from zero to 100km/h in a claimed 5.8 seconds and offers thick low down torque for effortless daily driving, the lack of noise and character means the driving experience is more akin to what you get from a fast Falcon than a sports car. The engine doesn’t even spring to life like a sports car should on start up.

Of course, the EcoBoost engine is much more fuel efficient than the V8, consuming just 9.5L/100km in our test, almost half of what the V8 uses. But whether or not the savings at the bowser is enough to make up for the lack of fireworks, we’re not so sure. 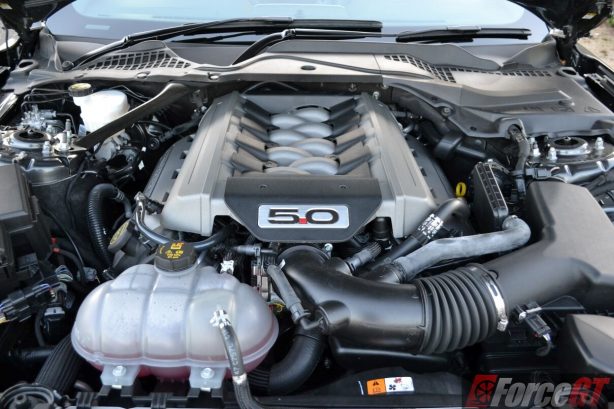 To us, the Mustang GT is the real deal. The 5.0-litre V8 produces 306 kW at 6,500 rpm and 530 Nm at 4,250rpm. It fires up with that unmistakeable growl that only a bent-eight is capable of, and stays throbbing even on idle. Feed in the revs and you get that majestic V8 roar that is getting rarer by the day.

The glorious soundtrack is matched with some serious performance – 0 to 100km/h is despatched in as little as 4.8 seconds and the 530 Nm of torque is delivered with silky linearity.

The extra you pay for the GT over the EcoBoost also gets you Brembo front brakes with six-piston calipers, wider rear tyres and a larger front lip spoiler, on top of “5.0” badging behind the front fenders and “GT “rear logo.

While the six-speed automatic is smooth and better suited to take the grind out of congested urban traffic, we’d still prefer the slick DIY box, which is especially fun when matched with the grunty V8. 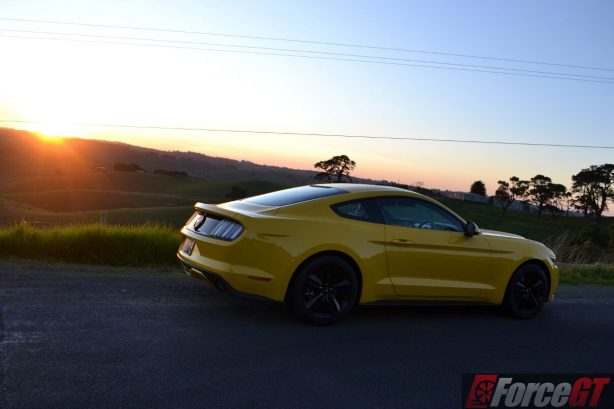 Despite the retro look, the new Mustang does finally come with a modern suspension setup that isn’t afraid of the bends. Gone is the wallowy feel of the old car, replaced with respectable body control and cornering flatness. And in the GT, the magnificent Pirelli P Zero tyres (the exact same stuff you get in McLaren and Porsche supercars) offer astounding level of grip.

However, there’s still plenty of room for improvement in the dynamics department. The 1.7 tonne heft constantly makes its presence felt in the bends and the nose just doesn’t point as responsively and precisely as we’d hope. You never feel the car holding it all together and in unison with you around the bends.

A trait of all generations of Mustang, the nature of the new chassis is still very tail-happy (which can be a good thing for some) and the car can feel a little twitchy on the limit.

On the flip side, the Mustang is one of the smoothest riding sports cars we have come across, delivering exceptional ride comfort across most surfaces, making it a superb grand tourer. 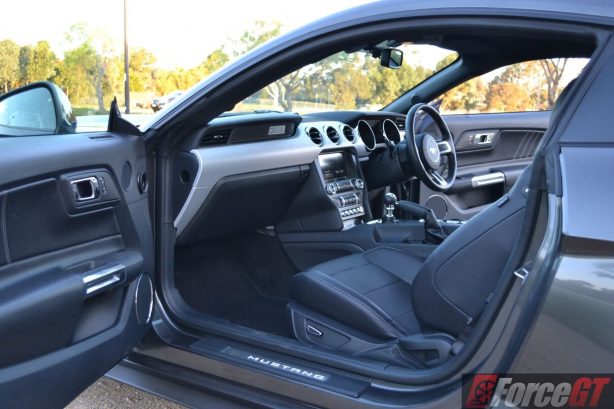 Like the exterior, the interior is all retro and pays homage to the original 1964 Mustang. It’s a comfortable place to be in for long drives and the sport seats provide great support, but the choice of cabin materials range from brushed aluminium and lavish leather to scratchy hard plastics and budget-grade switchgear.

In automatic version, the gear selector display in the centre of the instrumentation panel looks especially outdated and out of place. And why is the sound system sounds like the stuff you get from a sub-$20k Fiesta?

There’s also much to be desired in terms of overall fit and finish, both inside and out. Exterior panel alignment is unacceptably poor – the dual exhaust tips in one of our test examples are not even properly aligned.

You do, however, get lots of standard equipment, regardless of which variant you opt for. 19-inch black painted alloys are standard across the range, so are HID headlights, LED taillights, keyless entry, heated mirrors and the super cool wing mirror projection lights that project the pony logo on the ground at night.

The hype around the new Ford Mustang is not surprising. With head turning looks, genuine performance and sharp pricing, the latest iteration of the iconic Pony car is sure to continue its sale success despite its many flaws.

While the EcoBoost engine combines efficiency with good power, flogging the superb-sounding V8 is still the best way to enjoy the full Mustang experience.