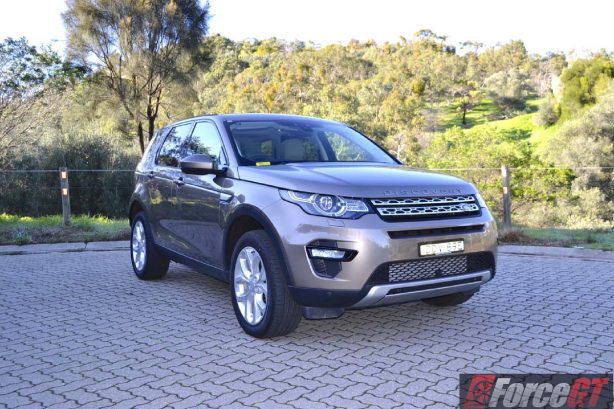 It is the first member of the expanded Discovery family and takes the family-friendly SUV a little further upmarket, sitting above the fashionable but smaller Range Rover Evoque.

Counting the BMW X3, Mercedes GLC, Audi Q5 and Lexus NX as its rivals, it not only undercuts the German trio by a handsome margin but is also slightly cheaper than the all-wheel drive variant of Lexus’ popular NX.

Of course, going wild with the options would quickly see the price balloon, as in our SD4 HSE test car, which has $19,100 worth of options added to the $64,235 base price.

So, can the handsome Brit challenge its rivals in the hotly contested premium SUV segment? Let’s find out…. 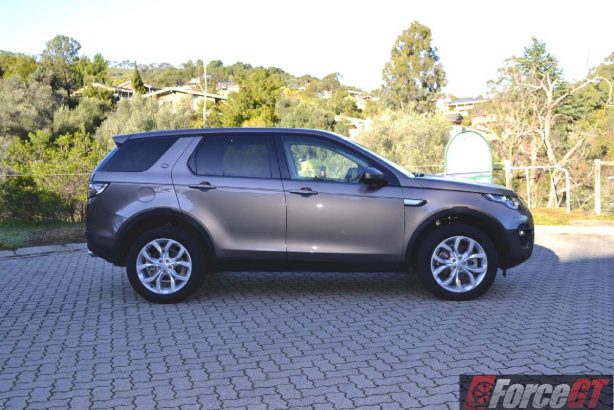 Thanks to huge improvements in design, interior presentation and refinement, the Discovery Sport wins sales on looks alone. There isn’t a wayward crease or misplaced line on the SUV at all. It is well proportioned and the sheet metal is pulled taut over its athletic frame.

If the Evoque can look a little feminine (it’s popular with the fairer gender after all), the Disco Sport oozes masculinity. In a suave, upmarket way.

Its roofline isn’t as overtly aggressive as the Evoque’s, either, meaning better headroom at the rear and significantly better rear visibility. 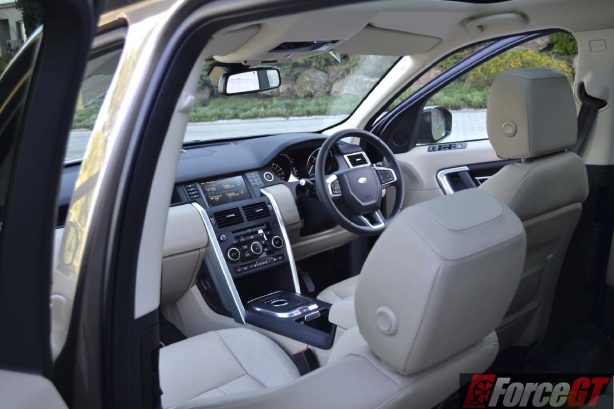 Inside, the cabin takes a giant leap in presentation and quality compared to the superseded model. As expected these days, there are plenty of squishy plastics and its dashboard is partially cladded in leather to elevate the premium feel.

The Discovery Sport is one of the few cars in its class that is available with seven seats (albeit a $1,990 option), although the pair of third row seats is best suited for occasional use by children. All seat positions get their own air vents and air con controls, which are handy in Australia’s hot summer.

When not in used, the third row folds flat into the floor at the pull of a strap, liberating 981-litres of cargo space. With the second row of seats folded, the total load area measures a considerable 1,698 litres. 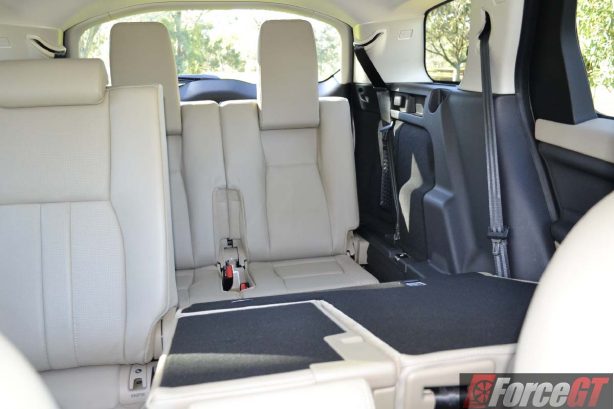 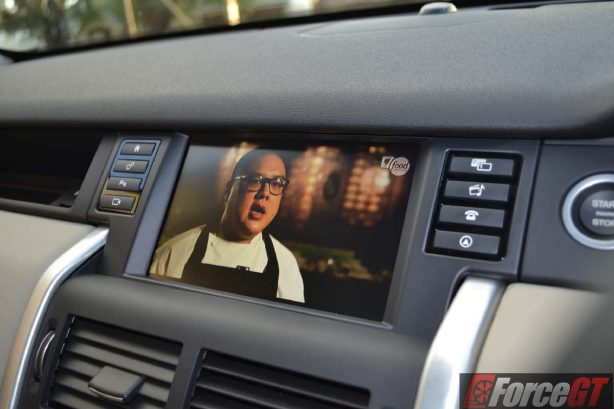 Driver and front passenger drops into a pair of wide and comfortable seats upholstered in grained cream leather. With 8/8 way power adjustment, it’s not hard to find a comfortable driving position.

Taking centre stage in the interior of our test car is the 8-inch touchscreen infotainment system optioned with the $4,500 Entertainment Pack. It brings a crisp 825W Meridian Surround Sound system with 17 speakers, DAB+ digital radio and television with dual-view technology.

In dual-view mode, it displays the TV when viewed on the passenger side while presenting driving information such as satellite navigation on the driver’s side (see it in the video below). Clever!

The cabin is quiet while on the move, with little road or wind noise intrusion. 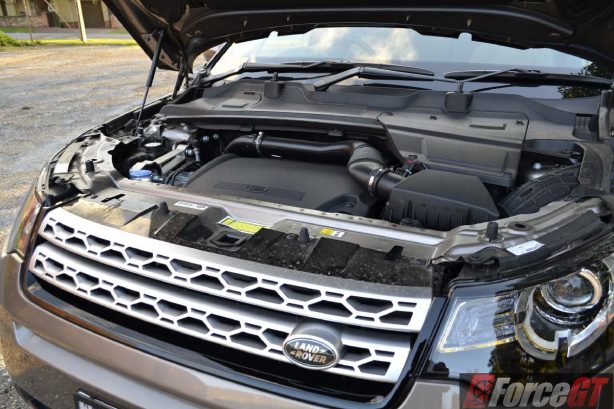 All engines are mated with ZF’s 9HP48 nine-speed automatic transmission, with the slow-selling 6-speed manual dropped from the line up.

We were supplied with the popular turbodiesel engine for the test, which is a remnant of Ford’s ownership of JLR and will soon be replaced with the company’s own ‘Ingenium’ engine.

Off the line, the aging powerplant is slow to build boost and doesn’t possess the same responsiveness as BMW or Audi’s turbo four-cylinders. Its slight hesitations are exacerbated by the transmission that is painfully slow to react to driver’s input, making overtaking or filling that opportune gap in the traffic a nail-biting endeavour. 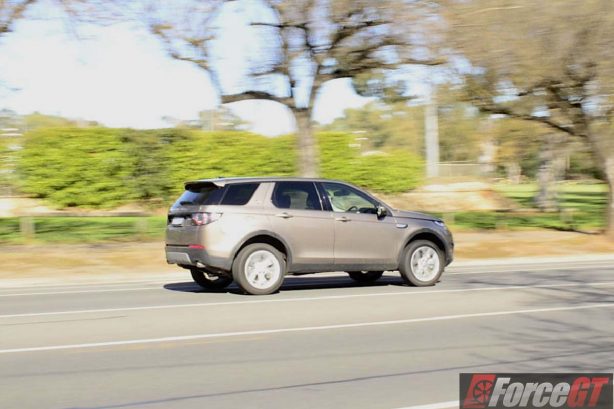 We are constantly being caught burying the throttle too deep while waiting for things to happen, only to have the Disco Sport responding suddenly delivering too much oomph, making it a challenge to drive the car smoothly.

It isn’t the most refined diesel mill, either, with a prominent diesel clatter and getting more vocal as revs climb.

While the powertrain is the Disco Sport’s biggest failing, Land Rover enthusiasts will be glad to know its off road credentials are as strong as ever. Thanks to short front and rear overhangs, and the brand’s advanced Terrain Response four-wheel drive system, the Disco makes it easy to tackle tricky conditions. 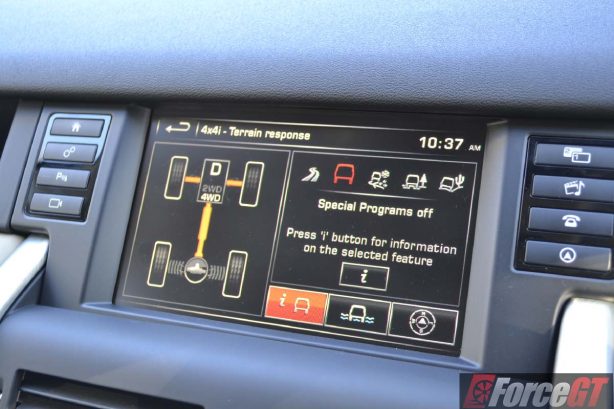 DDV 89E is also armed with the optional Intelligent Dynamics Pack that brings All-Terrain Progress Control consisting of a suit of serious off road driving programme, making off-road driving a child’s play even for amateur.

Back on the black top, its steering has decent feel and is responsive, while the tyres provide good grip through corners.

However, it doesn’t feel as composed as the BMW X3 on twisty country roads, with a little too much body movement, even when the adaptive dampers are set to Sport.

Around town and on the freeway, the Disco Sport is a fine cruiser with a comfortable ride and good high-speed stability. 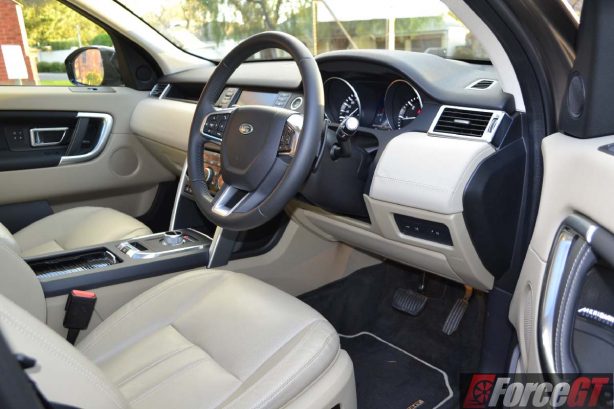 While the latest Land Rover is a big step up in terms of built quality compared to previous generations, its fit and finish still isn’t up to German or Japanese standards.

The Discovery Sport’s panel gaps are wider and the tolerances between the dashboard and the door trim are also inevitably larger. 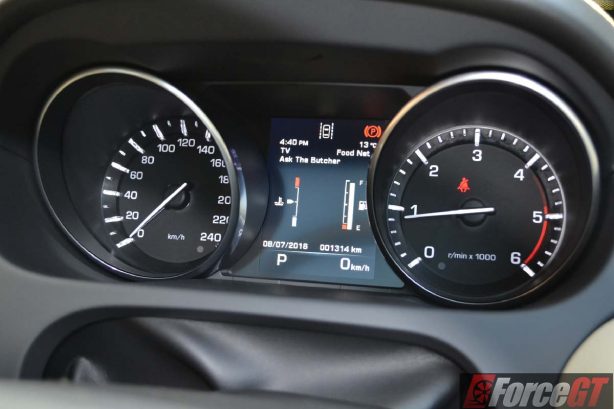 Over our weeklong test, the Disco Sport’s 2.2-litre turbodiesel returned a combined average of 8.8L/100km, according to the trip computer. This is against Land Rover’s seemingly optimistic claim of 6.1L/100km.

Nevertheless, with a 65-litres fuel tank, the SUV still has an approximate cruising range of 738km before needing a pit stop. 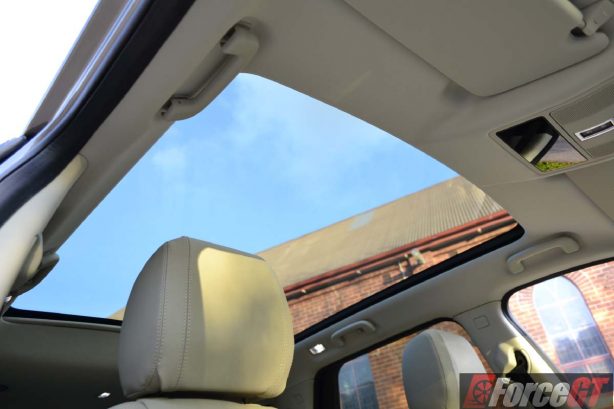 Those planning to take their Disco Sports to the great outdoors will also be pleased to know there are many power points in the car, including at least three within the cabin and another two in the boot.

The Discovery Sport is an attractive and well-equipped SUV for those wanting both on and off road capability in a family friendly SUV.

While it has decent handling and good ride comfort, the experience is hamstrung by its recalcitrant powertrain and transmission.

Happily, Land Rover’s own ‘Ingenium’ diesel is just around the corner and we strongly recommend waiting before signing on the dotted line.