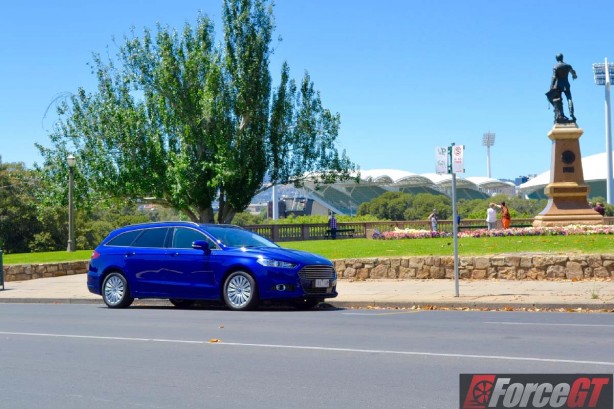 With the locally made Ford Falcon’s imminent departure, the latest Ford Mondeo is expected to take over the baton from its bigger brother, and the news is encouraging.

The fourth-generation Mondeo arrived in Australia mid last year, but only in wagon and hatch body style. The sedan, which is available overseas, isn’t coming to Australia. At least for now. Perhaps, Ford Australia didn’t want to threaten the Falcon’s one last chance at winning over Aussie buyers.

Available in three variants locally, the range kicks off with the Ambiente at $32,790 plus on-road costs, followed by the mid-range Mondeo Trend from $37,340. The line up is topped off by the $44,290 Titanium wagon diesel.

All models, bar the Titanium wagon, come with the choice of either petrol or diesel. Equipment level is high, too, with the only option being prestige paint at $450. 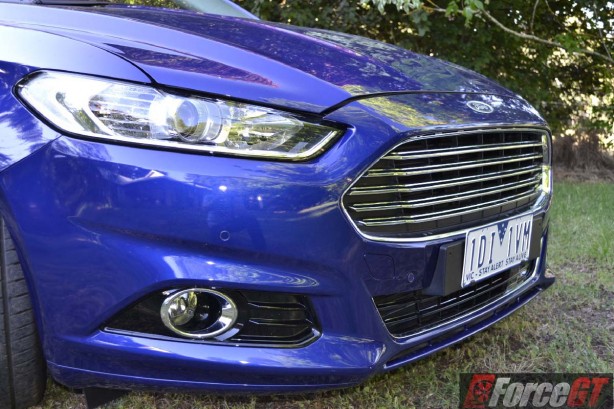 Both hatch and wagon are handsomely styled; adopting Ford’s Aston Martin-inspired front grille flanked by a pair of slender headlights. The long bonnet and coupe-like silhouette combine to give the car an eye-catching sporty look.

At the back, all models are equipped with modern LED taillights. Each variant also comes with different sized alloy wheels, ranging from 16-inch on the base model to 18-inch on the Titanium.

Surprisingly, the car’s overall dimensions are marginally smaller than before, although you would be hard pressed to tell the difference. In fact, parked side-by-side, the Mondeo is only slightly smaller than the homegrown Falcon. 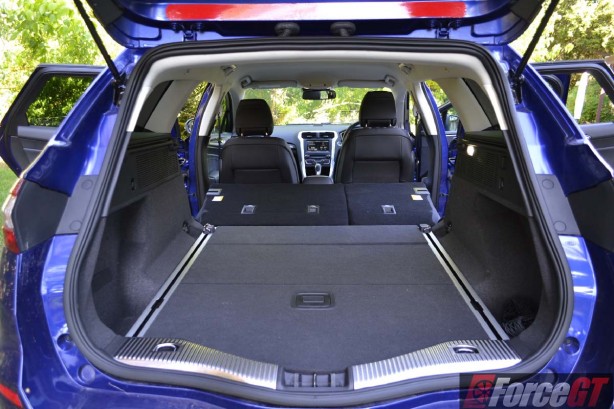 Our test car, a Trend wagon, also comes with a cavernous 730-litres of boot space, expanding to a vast 1,605-litres with the rear seat backrest folded down. There are also plenty of storage options in the cabin, including a sizeable alcove in the front centre console.

Both front seats are electrically operated and come with electric lumbar support. At the back, while the rear bench is equally as comfortable as the front seats, legroom is tighter than expected for tall passengers.

Ford has also tidied up the dashboard, with most functions now controlled via a crisp and easy-to-use 8-inch colour touchscreen, complete with Ford’s latest-generation SYNC2 voice command system. 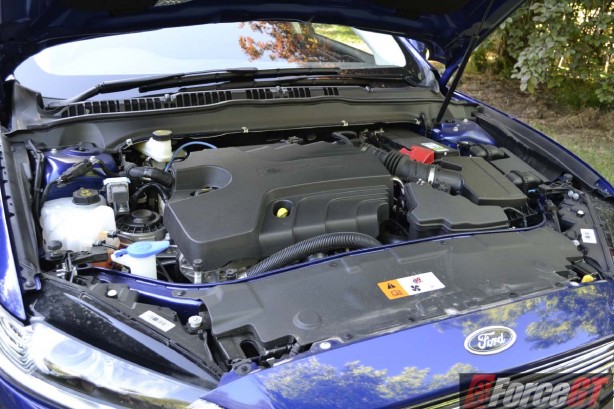 The Mondeo comes with a choice of petrol or diesel engine, both four-cylinder turbocharged units.

All model are mated with six-speed automatic transmissions, with the diesel variants getting Ford’s twin-clutch Powershift. 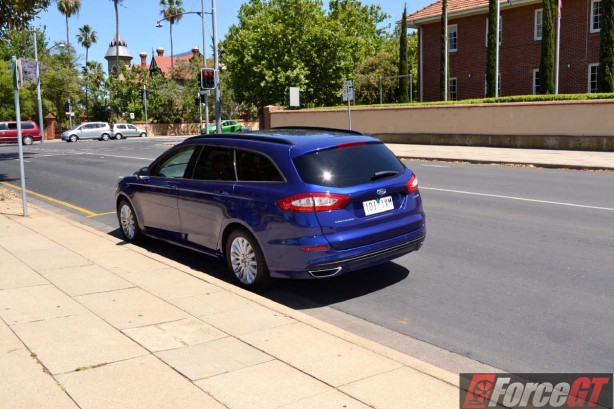 On test, the diesel engine feels punchy and relatively smooth and refined. It also sounds rather sporty when given the prod, while tyre and engine noise are well suppressed.

As the car was designed and developed by Ford’s European subsidiary in Germany, the Mondeo’s driving dynamics are typically European – naturally.

Its steering is nicely weighted and sharp, while the suspension strikes a beautiful balance between comfort and handling.

Ford’s dual-clutch transmission however, feels distinctively less sophisticated than Volkswagen’s now benchmark DSG gearbox. It is slow to kick down and there is no manual gate on the gear lever. While you can use the steering wheel-mounted paddles, it will revert back to auto mode if you are not constantly swapping gears. Left to its own devices, its tardy shift delivery blunts the car’s performance – not helped by its spongy throttle response.

It’s a pity, because otherwise, the Mondeo is a competent little handler. 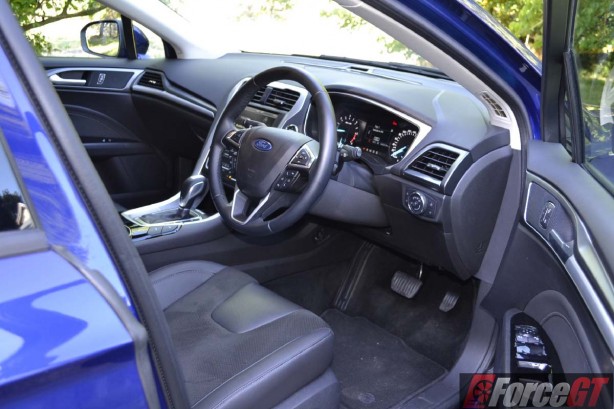 Sadly, the Spanish-built Mondeo’s fit and finish is rather average compared to its Japanese, Korean and European rivals. Panel gaps are uneven and some of the interior trims feel low-rent, although the soft touch dash surface is a step in the right direction. 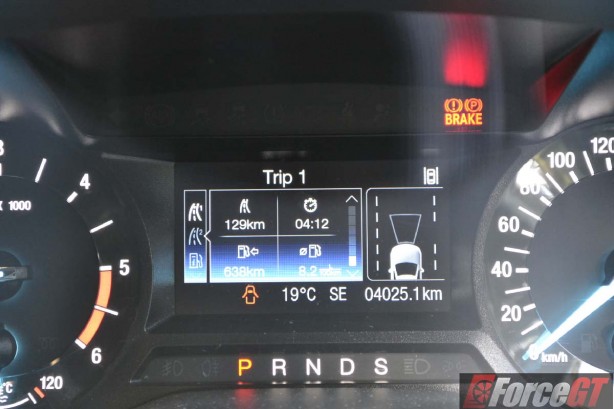 After a week of spirited driving and mostly urban commute, the Mondeo’s trip computer returned a 7.7L/100km reading, against its manufacturer’s rather optimistic claim of 5.3L/100km.

Nevertheless, with a 62-litre fuel tank onboard, the Mondeo diesel theoretically has a cruising range of approximately 805km before requiring a pit stop. 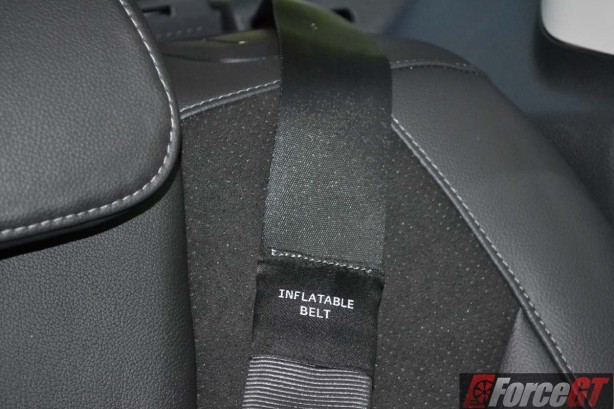 Ford Australia has loaded the Mondeo range with standard equipment in order to entice them away from rivals.

The 2016 Mondeo is first car in Australia to be equipped with inflatable seatbelts on the two outer rear seats. In the event of a crash, cold compressed gas is forced out of a cylinder housed below the rear seat through the buckle and inflates the seatbelts in less than 40 milliseconds.

They distribute the force of an impact across a wider area of the torso and help support the head and neck. 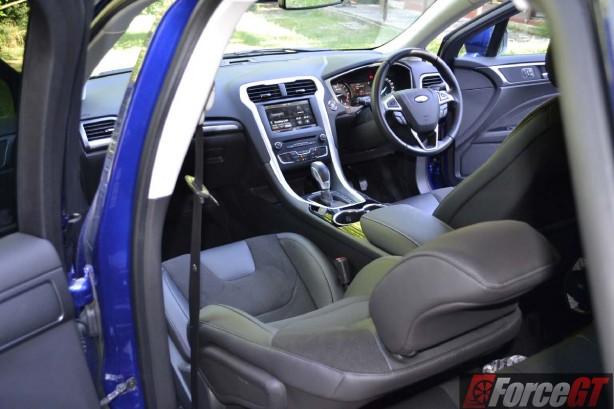 The 2016 Ford Mondeo is a stylish and refined cruiser with good handling and dynamics. It is also decently equipped and comfortable.

The wagon is more practical yet looses none of the good driving feel.

However, it is let down by average built quality and a languid dual-clutch transmission.

Previous Holden Trailblazer to replace Colorado 7 in late 2016
Next All-new Audi A4 Avant joins range from $63,900