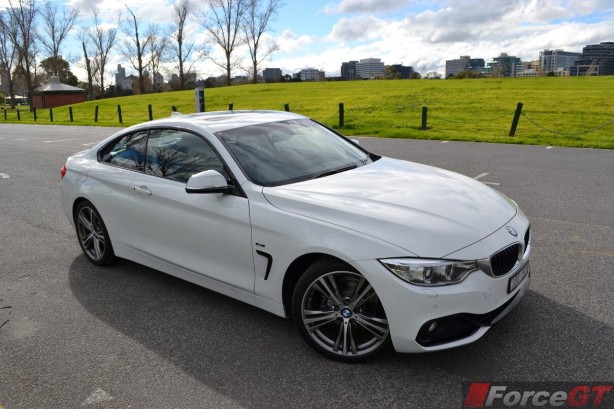 With a heritage spanning over four decades and six generations, the 3 Series Coupé (and now the 4 Series) has been generally regarded as the one to beat in the premium sports coupe segment. The key to its success – front-engine, rear-wheel-drive, sharp handling and handsome looks – has been carefully passed onto each successor to ensure it stays ahead of the competition.

With the segment now played by high-flying rivals such as the Mercedes-Benz C-Class Coupe, Audi A5, Infiniti Q60 and newcomer Lexus RC, the 4 Series faces its toughest competition ever.

When it comes to coupes, style is everything. And in our eyes, the 4 Series is no doubt one of the most beautiful coupes on the market today. The sleek and athletic stance is accentuated by a low nose, flared rear wheel arches, swooping roof line and elegant lines. It is perfectly proportioned, too, no matter which angle you approach it from.

Despite its position as a slightly less practical, more desirable version of the 3 Series sedan, the only body panel they both share is the bonnet (a good thing). The mid-size coupe is 14mm wider and longer, as well as 64mm lower than the sedan. 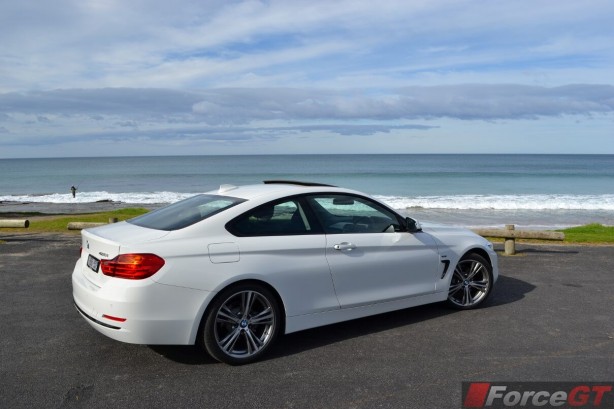 Adding to its desirability is a well presented interior. BMW’s now familiar layered dashboard design gives the cabin in the 4 Series a spacious and modern feel, with excellent ergonomics and clear instrumentation. While the 3 Series-sourced interior is inviting and a pleasant place to be in, a little differentiation from the sedan to keep the coupe more exclusive wouldn’t go astray.

The driving position is spot on and the front seats are very comfortable. Front occupants will appreciate the excellent legroom and two average-sized adults would fit in the back, although they might find the headroom a little tight due to the car’s sloping roofline.

The 445-litre boot is decent size for a coupe, but it’s 10 litres down on the Audi A5 and 35 litres smaller than its saloon sibling. For extra cargo space, the rear seats fold flat to increase the capacity to a sizable 1,300 litres.

The 4 Series gets the same engine line-up as the 3 Series. The base 420i Coupé sports a 2.0-litre four-cylinder turbocharged petrol engine developing 135kW of power and 270Nm of torque. The same engine also powers the 428i, albeit with a different tune to produce 180kW and 350Nm.

The 2.0-litre four-cylinder turbodiesel in the 420d is the only diesel offering the range, developing 135kW and 380Nm. For keen drivers, the 435i Coupé offers 225kW and 400Nm of performance from its 3.0-litre twin-scrolled turbo in-line six engine – identical figures as the 335i Coupé it replaces.

All models drive the rear wheels through the highly touted ZF eight-speed automatic transmission with steering wheel-mounted paddle shifters. A six-speed manual is also available. However, the more engaging seven-speed dual clutch gearbox in the old 335i Coupé is no longer offered. 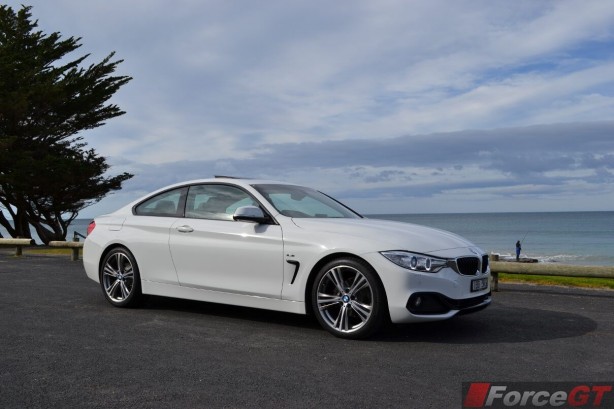 The 2.0-litre four-pot in our 420i test car delivers respectable performance and refinement, although its 135kW output may not look like a lot. Its smooth power delivery from the get-go is a result of all 270Nm arriving from an impressively low 1,250rpm. The torque hangs around all the way until 4,500rpm, offering effortless driving in urban traffic and swift mid-gear overtaking.

Its 7.3-second sprint from zero to 100km/h (7.7s tested) is not exactly fast, but adequate for those who are looking for a stylish coupe to drive daily. The 420i then is more of a rapid tourer than an outright sports car. Though as a sports coupe, we would prefer a sharper sounding engine and sportier exhaust.

The quick-shifting auto is the highlight of the drivetrain, working the power from the engine through eight perfectly stepped ratios. In Normal mode the unit’s smooth demeanour offers a relaxing drive. Flip it to Sport or mesh the pedal and you will appreciate the enthusiastically crisp gear changes. 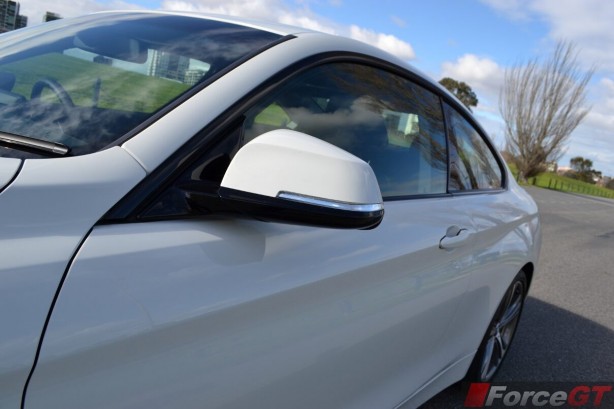 The 4 Series boasts the lowest centre of gravity in the current BMW range. It’s also more engaging to drive than the sedan thanks to wider rear track and different springs and dampers.

BMW has been nailing the rear-wheel-drive sports coupe arena for decades now, and the new 4 Series continues that trend. The chassis is wonderfully balanced, offering precise and neutral handling. For even better body control, buyers should opt for the M Sport pack which brings adaptive suspension with selectable damping modes.

The athletic dynamics are matched by the accurate and sublimely weighted steering, and the sharp throttle response in Sport mode. The brakes are good, too, with a progressive feel through the pedal.

Riding on 19 inch wheels and run flat tyres (Sport Line and Modern Line), the ride at low speeds can be jittery on rough roads, but smoothens out significantly once over 80km/h. Other than the intrusion of some slight wind noise through the frameless windows, the 4 Series cabin is well insulated from road noise. 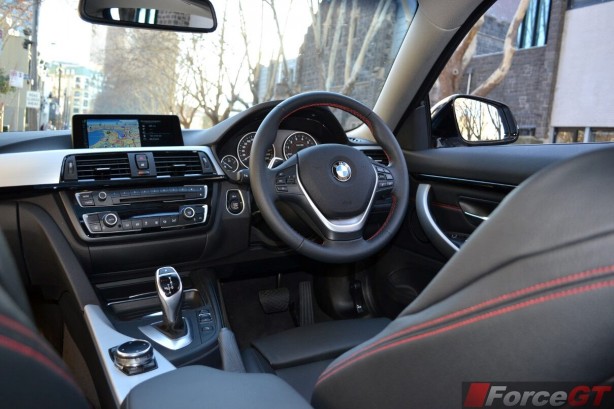 Unlike the South African-built 3 Series, the 4 Series is sourced from Germany, hence built quality and fit and finish are top notch. Most contact areas are soft to the touch, including the door trims, while the seats are covered in high quality leather.

The typically modern 4 Series cabin gets a further touch of class in our test car with a generous application of brushed aluminium trims on the dash, centre console and doors. That being said, the interior still lacks a bit of glamour for a car that costs over $70k, especially with the new Mercedes C-Class Coupé set to push the envelope even further.

All models in the 4 Series range have admirable fuel consumption figures. The base 420i we tested is the most frugal of all the petrol variants, rated at 6.1L/100km, against our tested average of 8.3L/100km. It’s impressively frugal on the freeway, zipping just 5.0L/100km.

The mid-spec 428i’s claimed 6.4L/100 km on the combined cycle makes it the most balanced model in the range in terms of performance and economy, while the 420d diesel is the most economical at 4.7L/100km. 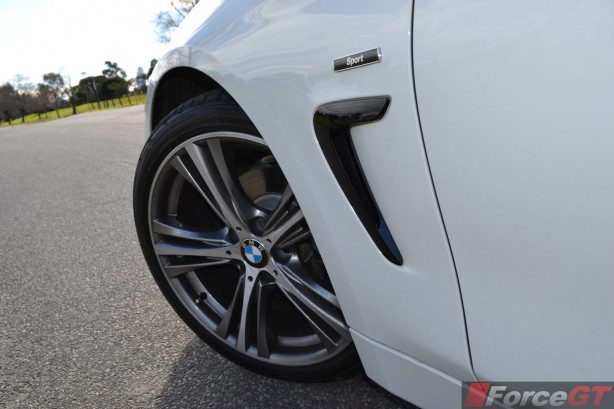 The range-opening 420d and 420i models offer the best value for money in terms of standard features. They are equipped with leather seats, reverse camera, keyless entry and push-button start, Bluetooth connectivity, dual-zone climate control, alloy wheels, Bi-Xenon headlights, and a much improved iDrive system with navigation.

Essential premium features such as seat heaters and digital radio tuner however, still come at extra costs. And typical of BMW, options can be very expensive. For the enthusiast though, the M Sport package option is a must.

After a string of forgettable niche-filling GT and crossover models, here is a car that represents what BMW does best. Gorgeous looks and solid dynamics meet smart practicality and everyday usability, BMW’s mid-size coupé is still as desirable as ever.