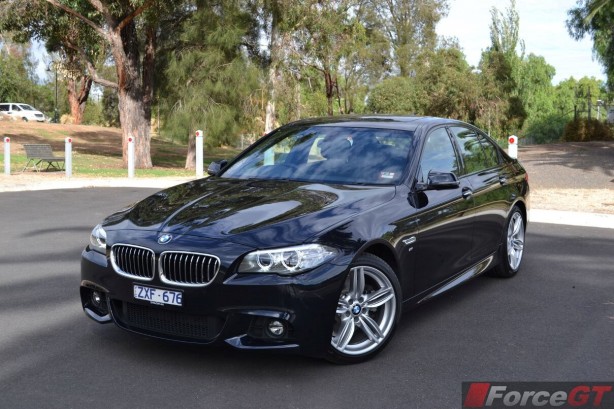 When it comes to online shopping, there’s Amazon. When it comes to executive sedan, there’s the BMW 5 Series. For decades, the propeller badged saloon has been the benchmark in the executive class, eclipsing the Audi A6, Mercedes E-Class and Lexus GS.

Things have started to change in recent years, however, against the 5 Series favour. While the 5 Series is still a hot favourite, the competition has closed up dramatically. So close in fact, that it’s no longer a straightforward decision to pick the Beemer over the rest.

It’s even harder now with the Jaguar XF and Infiniti Q70 joining the party. Both admirably capable in their own rights. 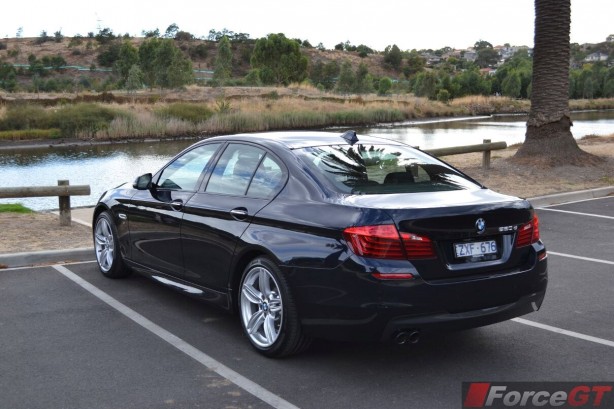 For 2014, BMW has given the 5 Series a subtle makeover to ensure it stays ahead of the pack, at least in terms of sales. Tweaks include revised front and rear lights, restyled bumpers, improved interior trim and a more intuitive iDrive interface.

There’s no doubt the 5 Series is one handsome and smart-looking car. Its well proportioned body is characterised by that deeply chiselled bonnet, the bold shoulder lines and the confident rear deck.

While the Jaguar XF has more style and the Audi A6 is more modern, the 5 Series blends it all in perfection.

The optional M Sport aero package is something you should seriously consider getting if you want your 5 Series to resemble a M5 (don’t forget to debadge). Fitted to our test car, the kit consists of sportier front and rear bumpers, deeper side skirts, exhaust tips in dark chrome and 19-inch M Sport wheels. 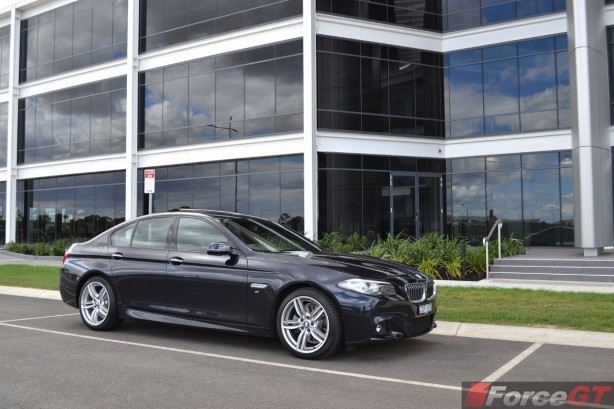 The 5 Series has always excelled in its interior, and the latest generation is no exception. The impeccably built cabin boasts high quality materials wall to wall, and is a sublime place to be in. It can be appropriately summed up in three words – modern, functional and luxurious.

Notable changes made to the interior for its mid-life update (or LCI for Life Cycle Improvement in BMW speak) include new trim and colour options, instrument gauges that change colour, and a revised iDrive controller with a larger trackpad that lets you “write” alphabets and numbers with your finger to operate the sat-nav.

The M Sport front seats provide good lateral support but are not as comfortable as those in the Mercedes E-Class or Lexus GS. The sporty driving position means you sit low and tight, while still getting excellent visibility all round.

The second row seats at the back offer generous seating for five adults, with plenty of legroom and headroom to get comfortable. The boot is a decent 520 litres, but still 20 litres smaller than that on the Mercedes E-Class.

The 520d tested here is powered by a 2.0-litre four-cylinder turbo diesel engine developing 135 kW of power and 380 Nm of torque. From outside the car, it’s diesel clatter is profound, but in the cabin it’s just a tad more vocal than a petrol powered equivalent. And that’s only for the first quarter of the rev range during acceleration.

Driving around town instantly reveals the diesel’s eagerness in hauling the large saloon around. There are loads of usable power in the lower rev range, delivered with the kind of linearity you wouldn’t expect from a diesel.

While the throttle response is still no match for a petrol, the diesel is no slouch, capable of launching from 0 to 100 km/h in a respectable 7.9 seconds (claimed). Paired with the crisp ZF 8-speed automatic gearbox, the 520d strikes the best balance between performance and fuel efficiency in the 5 Series range. 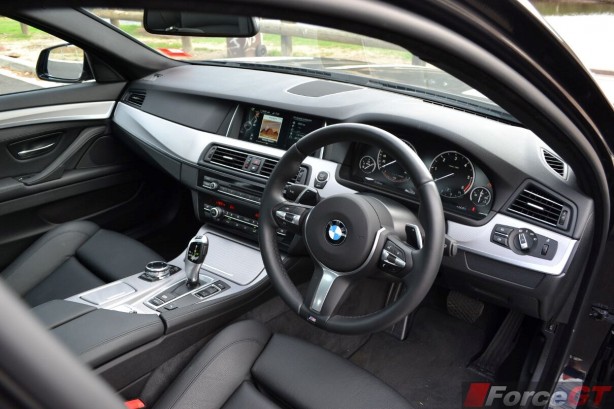 Handling has always been the reason why you buy a 5 Series over its rivals. And the latest generation continues to excel in this area with tight body control, excellent steering and good grip. But to get the most out of its chassis, you need to opt for the M Sport package with its adaptive damping system. In Sport mode, handling and response are notably sharper, without sacrificing too much in comfort. The improved agility also manages to mask its sizeable mass, which means it doesn’t feel that big to drive.

Noise levels in the new 5 Series have seen improvement, but there is still slight road noise coming from the run flat tyres.

As one would come to expect from a 5 Series, built quality and fit and finish are top notch. Most contact areas are made of soft touch plastics, including the door trims, while the seats are covered in high quality leather.

The typically modern 5 Series cabin gets a further touch of class with a generous application of brushed aluminium trims on the dash, centre console and doors. 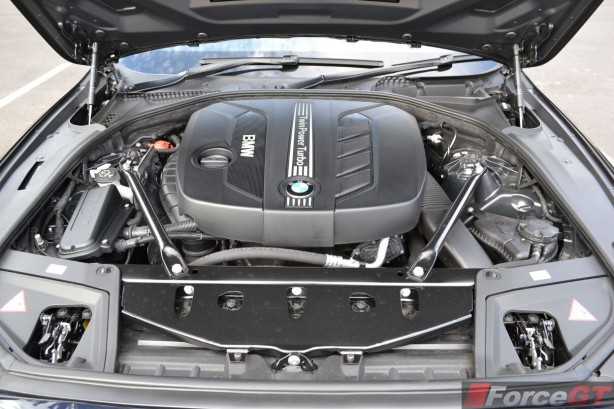 The 520d is the most economical model in the range, more so than the petrol-electric ActiveHybrid 5.  Against BMW’s claimed average fuel consumption figure of 4.9L/100km, the 520d we drove for a week managed a very impressive 5.9L/100km in the real world with the car spending about 60% of its time in urban traffic.

BMW’s EfficientDynamics technology, which is standard across the range, as it turns out, is more than just a marketing gimmick.

It’s made up of ECO PRO mode, Auto Start/Stop and Brake Energy Regeneration, which charges the battery when the car is braking, coasting or decelerating so that the engine doesn’t have to spare some of its power driving the alternator. 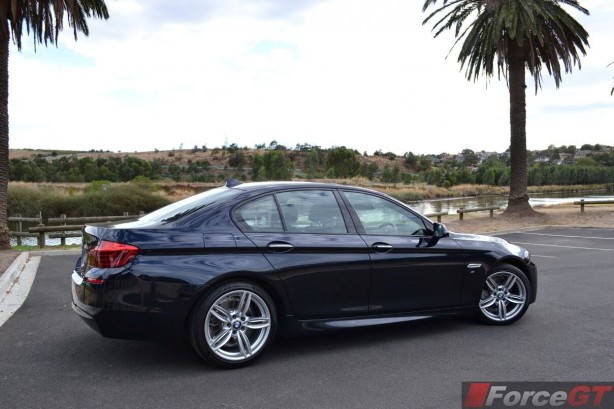 Typical of BMW, options can be expensive. The M Sport Package fitted to our 520d test car costs a whopping $7,900, but this is one option we highly recommend getting if driving for you is more than just going from A to B.

The BMW 5 Series is still the best balanced executive saloon in its class with its good looks, excellent built quality and neat handling.

The diesel models are some of the most efficient in its class, too, with the 520d giving the best mix of performance and economy.

The chassis options still cost a fortune but for a better drive, the M Sport Package is a must.