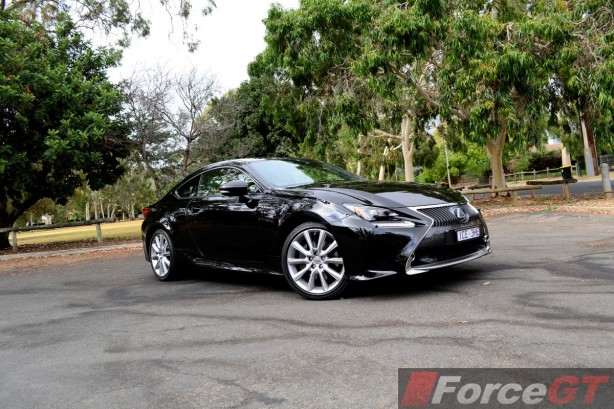 After years of helplessly watching buyers rush to the Germans for their entry-level luxury sports coupes, Lexus has finally got a true contender in the ring.

The first-ever Lexus RC is a genuine rival to the BMW 4 Series, Mercedes C-Class Coupe and Audi A5 heavy weights, with style and performance to match. It is the latest vehicle to herald the reinvention Lexus, ahead of the brand’s 25th anniversary.

Available in Australia solely with a 3.5-litre V6 petrol engine, the RC 350 starts from just $66,000 for the Luxury model and tops out at $86,000 for the Sports Luxury, with the athletic F Sport lopping in at $74,000 in the middle. That’s stunning value compared to its German rivals.

A healthy 233kW and 378Nm across the board. You will need to dig deep to drop six-cylinders in any of its rivals – think six figures.

So, while the new RC 350 puts up a compelling case on price and specs, does it stack up in the all-important drive department? Let’s find out…. 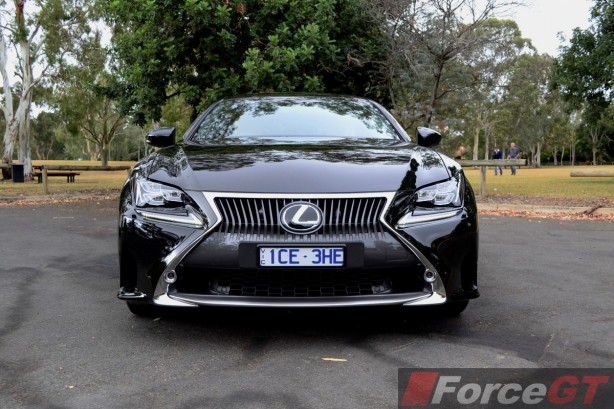 As with other recent offerings from the marque, the RC 350 takes Lexus’ styling to a whole new level. While the coupe’s underpinnings may be shared with the latest IS and GS Sedans, its stand out design is all new and bespoke.

It features the most aggressive interpretation yet of the Japanese brand’s spindle grille. It’s wide and low. And while it may not be to everyone’s taste, we love it. It’s daring and in your face.

The jewel-like LED headlights and daytime running lights not only look sharp day or night; it compliments the grille to give the car a wide, sporty and purposeful stance. 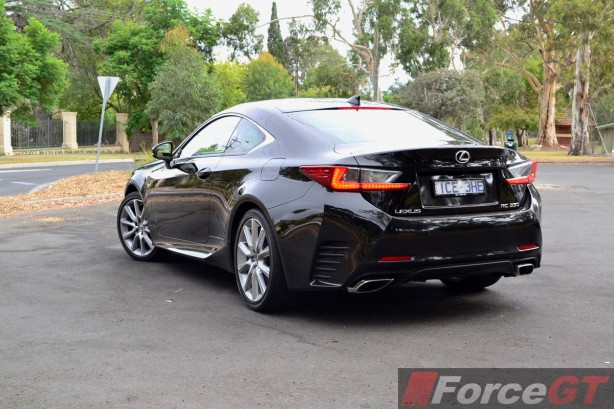 Side on, its sensuous roofline, beefy side skirts and shallow glasshouse make its German rivals look dull in comparison.

Driving the RC is like having Miranda Kerr sitting next to you. Topless. It turns head! 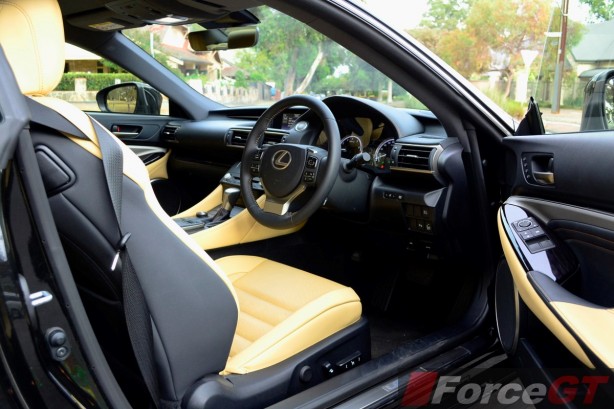 Inside however, its cabin is a little less dramatic. The dashboard is largely carried over from the IS Sedan, albeit with more cowhide covering the dash top, door trims and kneepads; the small, chunky steering is shared with other models in the showroom.

What’s new though, is Lexus’ latest Remote Touch touchpad that made its debut on the Lexus NX. It is more user friendly and reduces the clutter on the centre console.

But on the whole, the design shouts premium and quality. 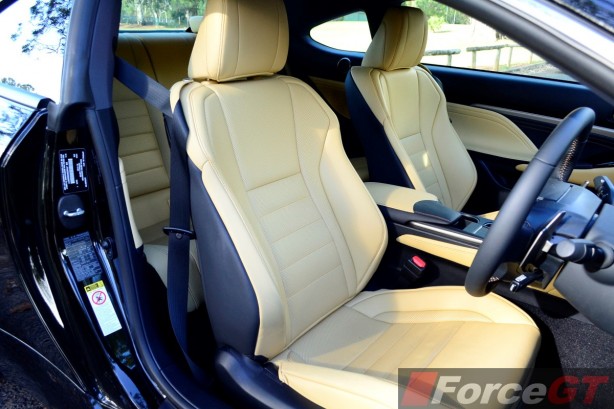 Step in through the large frameless doors and the RC’s cabin is a welcoming place to be.

There’s an air of sportiness in its design and a tangible high quality feel to most materials.  If you pick the F Sport model, there’s even a LFA inspired instruments complete with digital rev counter.

The driver and front passenger are cocooned in supremely comfortable, deeply bolstered, heated and ventilated seats. They slide forward electrically when the backrest is tilted forward via a small flap on the shoulder to ease rear seat entry. 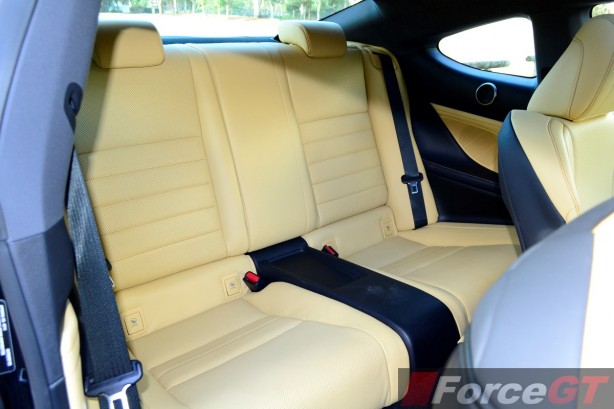 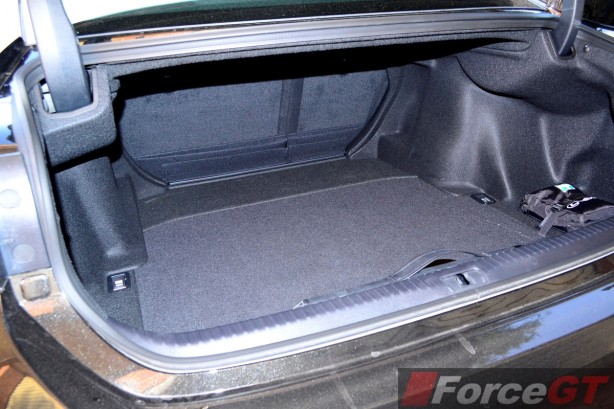 Like most coupes however, head and legroom at the back are a premium. You wouldn’t want to spend too much time tucked in back there.

Unlike the IS Sedan, the RC 350 has 60:40 split rear seat, allowing items measuring up to 1500mm to be accommodated. They can also be folded via a lever in the boot area, eliminating the need to climb through the cabin to reach the release button on the rear seat.

At the back, the boot offers 423 litres with the seats up, slightly smaller than the 4 Series coupe’s 445 litres but not a deal breaker. 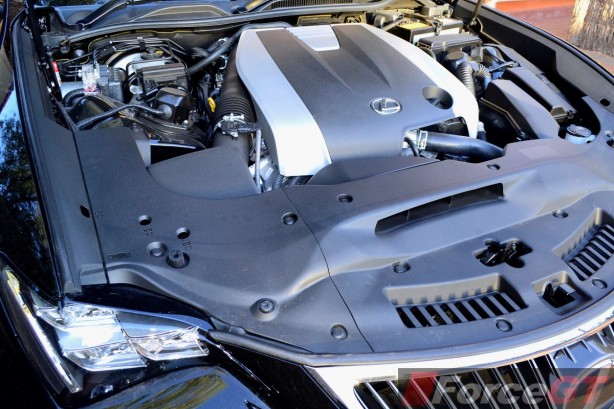 The RC is available only with a 3.5-litre dual-injection (direct and port) petrol V6 for now. The familiar unit has dual VVT-i for the inlet and exhaust camshafts and an intelligent electronic throttle.

It delivers 233kW of power at 6,400rpm and 378Nm of torque at 4,800rpm, fed to the rear wheels via an 8-speed automatic with M Mode that allows full torque-converter lock-up from second to eight gears.

It is a smooth and effortless unit with good low-end torque (although you won’t get the head pinned to the back feel of a turbo mill) and chubby mid-range on tap almost throughout the rev range. Its throttle response is near instantaneous, too.

There’s a suitably sporty engine note on open throttle, thanks to what Lexus calls the Lexus Active Generator. It uses the intake air pulse to raise the sound-pressure level at specific frequencies that are perceived to be favourable, such as at mid to high revs.

That can partly be attributed to the car’s porky 1,680kg weight, in base form – 115kg more than the BMW 420i. As a result, fuel consumption also takes a hit; with the car returning a disappointing combined average of 13.2L/100km on test. 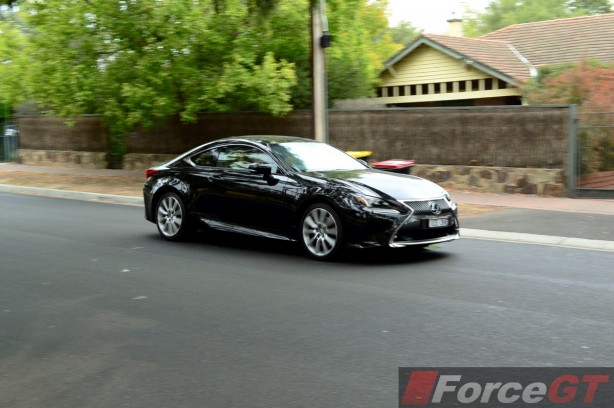 The RC 350’s chief engineer, Eiichi Kusama (who has a black belt in Aikido), says much of the inspiration for the car came from martial arts, where one uses the opponent’s force to respond.

According to Lexus, this is relevant to the development of the RC in terms of handling optimisation and also how they respond to their core rivals, whom they admit, are formidable.

The Japanese marque is also at pains to point out that the RC’s underpinnings are not just that of a reconfigured IS sedan, but a purpose-built chassis that is stiff and strong enough to be sporty yet supple enough to please traditional Lexus customers.

For that, Kusama amalgamated the stiff and responsive double-wishbone front suspension from the GS sedan, with the heavily fortified centre from the previous-generation IS Convertible, and traction-aiding multi-link rear suspension from the latest IS sedan. The new coupe also has a unique track and wheelbase of 2,730mm, and its own steering rack and suspension geometry.

The result is one of the most rigid chassis in the Lexus line-up (except for the RC F) and the core ingredient for a sports coupe.

Combine with its track-honed handling and the RC 350 is, one of the best handling cars to come out of Lexus, and betters the already impressive IS 350 sedan.

Crucially, Lexus has finally created a product worthy of challenging the status quo. 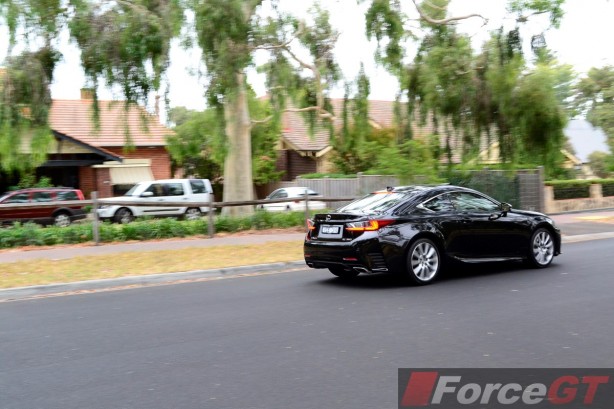 There’s an immediate sense of sportiness to the RC 350 the moment you hit the Start button. The engine fires up with a deep, authoritative growl; the driving position is low and the pedals are well spaced.

The slick 8-speed automatic dishes up ratios discreetly, swiftly and efficiently, with a low first gear for prompt acceleration off the mark, and closely spaced ratios in the intermediate gears for a chubby mid-range. In fact, its first gear is 8.5 per cent shorter than the 6-speed unit in the IS 250, while the top gear is 2.9 per cent taller.

Keen drivers can also swap cogs manually using the flappy paddles, where down changes takes just 0.3 seconds (or an even quicker 0.2 seconds if left in M mode) accompanied by throttle blipping. 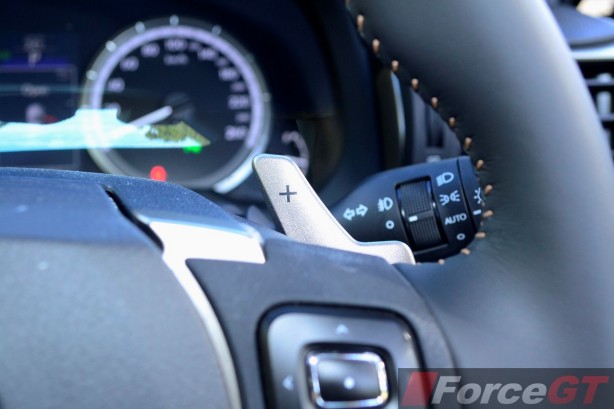 In Sport S and Sport S+ (not available on Luxury model) modes, the computer even uses a G-sensor to decide the optimal gear ratio for performance driving.

Does it work in the real world?

Yes. Left to its own devices, the transmission will automatically downshift during hard braking into a corner, and holding it through the corner, giving you immediate response to power out of the apex. Once out of a corner, it will snap into a higher ratio to maintain momentum.

The RC is also surprisingly agile for a big, heavy coupe. Its steering is quick, precise and responsive, and allows the driver to accurately place the gaping nose on its intended line of travel. Mind you, it could use with a little more feel – a common gripe with most electric power steering.

There is plenty of grip from the relatively modest 235 section tyres on our Sports Luxury test car and body roll is nearly absent. It feels composed and planted, even on 2nd gear corners, with plenty of suspension travel to deal with road imperfections. 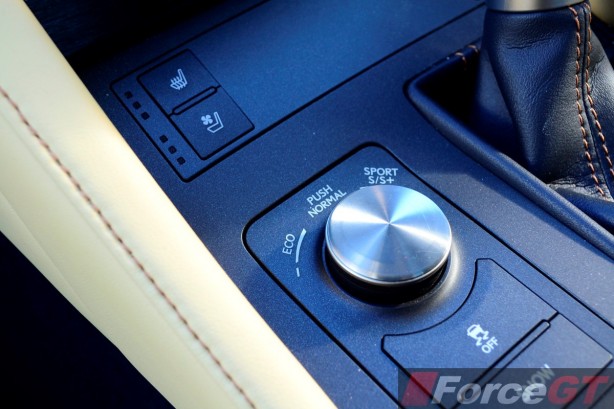 The only complaint we have is the little amber light with a car and two squiggly lines that came on every time we entered a corner faster than the computer liked us to. It’s usually accompanied by the most inappropriate braking – right in the middle of a corner – followed by complete shut off of the throttle. This happens even in Sport S+ mode!

Happily though, the ESP and traction control can be completely switched off. And with it off, you can even have lots of fun hanging the tail out!

Away from the bends, the RC 350 is a genuine cruiser. It’s quiet and refined, with lots of compliance to deal with our 3rd-world grade roads. Disappointingly however, the adaptive cruise control doesn’t bring the car to a complete stop and disengages at speeds below 30km/h. 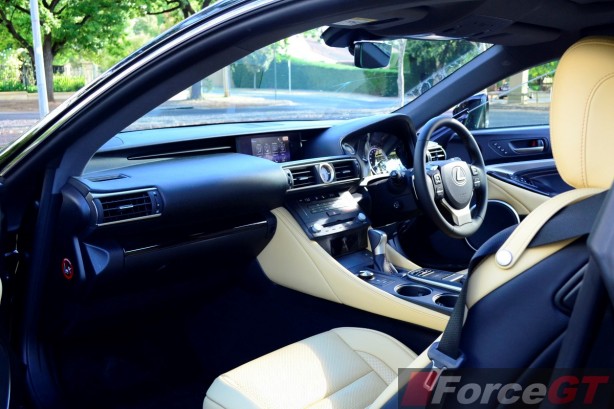 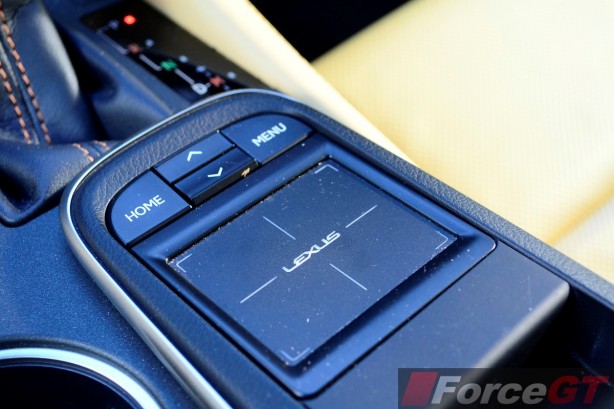 The Lexus RC 350 is unquestionably one of the most dynamically accomplished mainstream cars to come out of the once conservative Japanese brand. It isn’t as sharp as the BMW 4 Series when the road opens up, but the RC is the better, more refined cruiser in town.

Its value equation is further reinforced with better equipment and a sharp pricing.

If only the RC was 150kg lighter and more efficient….