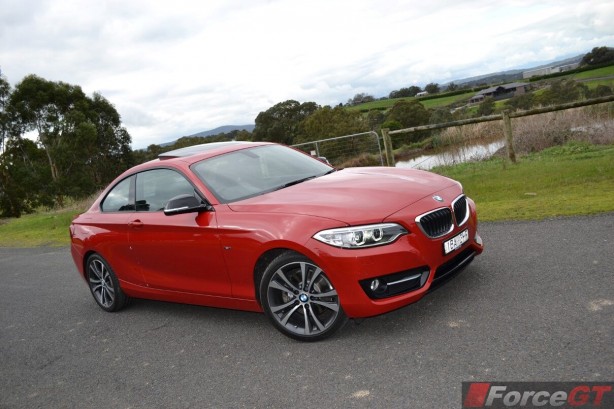 The new BMW 2 Series Coupé is the successor to the 1 Series Coupé, the entry point into the propeller badged sports coupe ownership. As the 3 Series coupe, now called the 4 Series, has grown so much in size over the years, BMW saw the opportunity to slot in a small coupe under the 3 Series. The supposedly one-class down 2 Series coupe is almost the same size as the E30 3 Series coupe from the late 80s.

So, what has the baby Beemer got to take on the likes of Audi TT and Mercedes-Benz CLA? We spent a week with one to find out.

The low nose, narrower headlights, prominent shoulder crease and wrapped-around tail lights are all packed in a lower, wider and longer body. The 2 Series is now a coupe in its own right. Like the other coupes from Munich, the 2 Series is well proportioned, no matter which angle you approach it from. 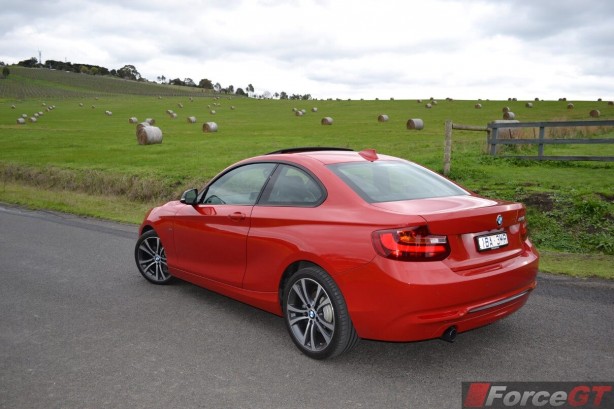 Inside, the 2 Series is all BMW – simple, contemporary and driver-oriented. The dashboard is carried over from the 1 Series hatchback, which is not a bad thing as the layered, stretched design makes the cabin feels bigger than it actually is.

Gradual standardisation means all controls and switchgear now get similar style and layout as the rest of the BMW range. They are ergonomically positioned and easy to use. The instruments are clear and the low-slung driving position is spot on.

The front row seats are very comfortable for a coupe, although the thick bolsters might be a bit squashy for larger built occupants. Typical of a small coupe, getting into and out of the rear seats will give your stomach muscle some serious workout.

Compared to its predecessor, the 2 Series Coupé is noticeably roomier at the back. There is now 6mm more headroom and 21mm more legroom for the occasional rear passengers, thanks to the 30mm longer wheelbase. Unlike coupes like the Audi TT and Peugeot RCZ, the rear seats in the 2 Series are actually good for adults.

The boot is now 20 litres deeper. At 390 litres, the 2 Series Coupé can even rival some family hatchback for cargo space. The back seats can be folded down, should you need even more space. 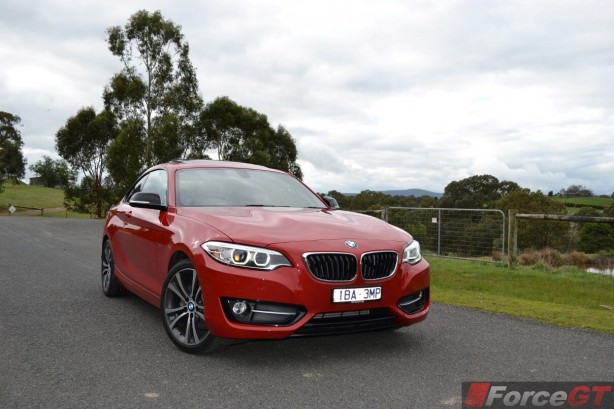 The base 220i Coupé sports a 2.0-litre four-cylinder turbocharged petrol engine developing 135kW of power and 270Nm of torque. In 228i guise, the same engine gets a different tune to produce 180kW and 350Nm.

The 2.0-litre four-pot in our 220i test car delivers respectable performance for everyday driving, although its 135kW output may not look like a lot. Its smooth power delivery from the get-go is a result of all 270Nm arriving from an impressively low 1,250rpm. The torque peaks all the way to 4,500rpm, making overtaking as swift as its 7.0-second sprint from zero to 100km/h (7.6s tested). Though as a sports coupe, we would prefer a sportier sounding engine and exhaust.

The quick-shifting auto is the highlight of the drivetrain, working the power from the engine through eight perfectly stepped ratios. In Normal mode the unit’s smooth demeanour offers a relaxing drive. Flip it to Sport or mesh the pedal and you will appreciate the enthusiastically crisp gear changes. 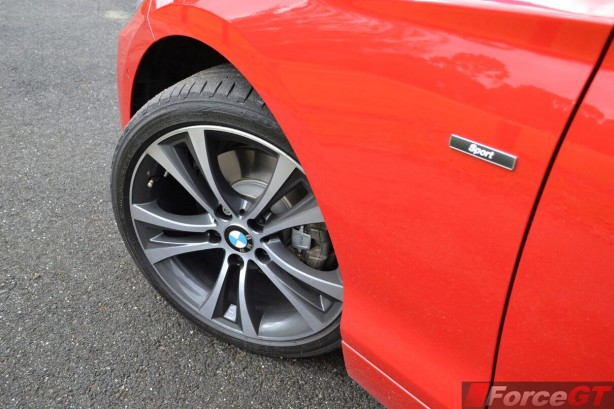 Perhaps what we like most about the 2 Series is the way it drives. If BMW models of late have compromised on driving dynamics for other things, the 2 Series Coupé is BMW back to the basics. The core attributes that define a sporty BMW – front engine, rear-wheel-drive, compact and light body – are back in the 2 Series Coupé.

Few rear-wheel-drive cars priced under $55k are as entertaining to drive as the 2 Series Coupé, other than the Toyota 86 / Subaru BRZ. The rear-drive chassis is very well sorted, striking a near perfect balance between sporty and comfort. The 50:50 front to rear weight distribution allows for neutral handling around corners, aided by excellent grip from those Bridgestone rubber.

Little seems to get in the way between the car and the driver. You get clear feedback from the sharp and precise steering wheel, so do you from the pedals. Adjust the throttle mid corner and you even get to decide how lively you want the rear end to be.

If the regular 2 Series Coupé is dynamically this good, we can only look forward to the M2 Coupé. 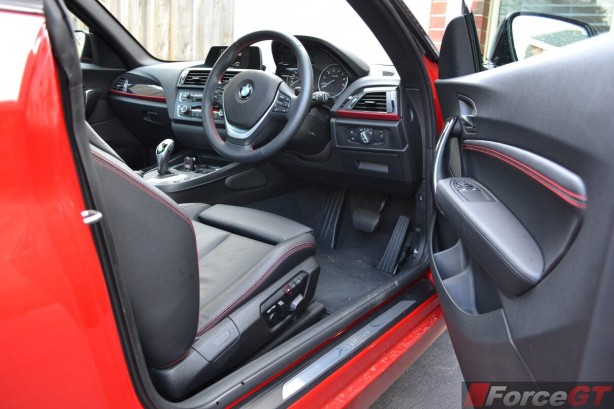 The quality of materials is a big improvement in the new 2 Series over the previous model. The cabin is solidly put together, with many panels made from the same high-grade materials used in the 4 Series. In fact, the 2 Series’ interior feels like a downscaled 4 Series cabin.

That being said, the Audi TT and Mercedes-Benz CLA still offer a bit more glamour in their interiors.

The base 220i we tested is targeted at people who want some level of sportiness without the associated fuel cost. It’s the most frugal of all the petrol variants, rated at 6.0L/100km, against our tested average of 8.1L/100km. Driven sedately, which we didn’t, an average of low sixes is achievable.

The mid-spec 228i’s claimed 6.3L/100 km on the combined cycle makes it the most balanced model in the range in terms of performance and economy, while the 220d diesel is the most economical at 4.4L/100km.

Even more respectable is the 7.6L/100km average claimed by the ballistic M235i, which is capable of blasting from zero to 100km/h in under five ticks. 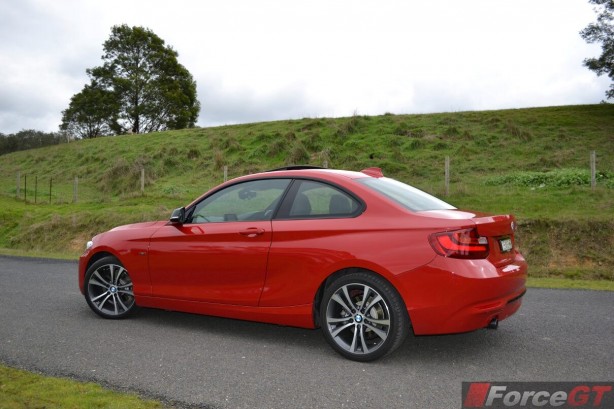 The four-cylinder petrol and diesel models now comes standard with iDrive-controlled navigation through a 6.5-inch high-resolution screen, as is synthetic Sensatec leather upholstery. Larger 8.8-inch display with Navigation Professional and real leather are only default in the flagship M235i.

Essential features such as seat heaters and Xenon headlights still come at extra costs, however. And typical of BMW, options can be very expensive, especially the M Sport package.

The BMW 2 Series Coupé might be the smallest coupe in the brand’s line-up, but it is easily our favourite small BMW.

The 2 Series Coupé shows Munich still builds some of the finest rear-wheel-drive sports cars around. Its undistorted dynamism is matched with good looks, a well appointed interior and efficient engines. For keen drivers looking for something honestly fun in the premium market, the 2 should be at the top of their shopping list.