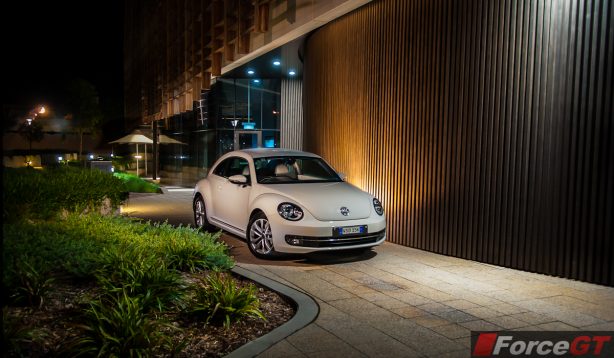 The Volkswagen Beetle is one of the brand’s oldest models. The original was launched in 1938 and has since sold more than 22 million units worldwide. It was “the people’s car” – simple, affordable and dynamically robust.

Unlike its humble forebear, the latest generation Volkswagen Beetle (VW has dropped the New Beetle name from the latest version. Now known simply as the Beetle) is aimed at style conscious, upwardly mobile individuals.

You will either appreciate its retro-inspired styling or find it a little bit pointless.

While the New Beetle of 1998 was based on VW Group’s PQ34 platform that underpinned the first-generation Audi A3, the 2013 Volkswagen Beetle sits on the PQ35 architecture pinched from the Mk6 Golf.

Naturally, expectations are high given that a) the Mk6 Golf was the dynamic benchmark of the class, and b) the Beetle’s direct rival, the MINI, is a competent handler. But, there’s only one way to find out…. 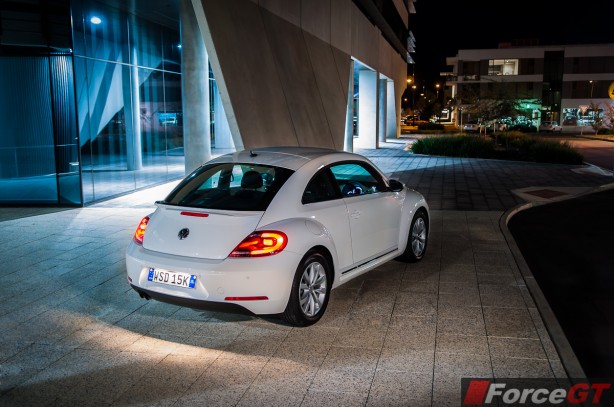 The second-generation New Beetle is as masculine as Barbie wearing gumboots, not helped either by the pointless vase and flower perched on the dash. Realising that no self-respecting beings with a Y chromosome would be seen associated with the car, the designers of the latest Beetle worked hard to give it a sportier, more masculine and dynamic appearance, while still retaining the iconic retro silhouette.

They shifted the windscreen back and extended the roof further aback. It is now substantially longer (+149mm), wider (+87mm) and lower (-21mm). The curved bonnet of the old car has been flattened slightly, while the car’s rump now more closely resembles the original Beetle as well. 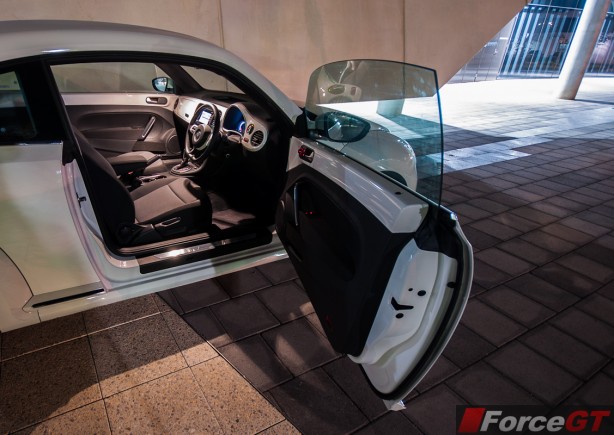 Inside the cabin, the Beetle’s designers created a distinctive yet practical interior with typical Volkswagen ergonomics. The glovebox, body-coloured dash panel and door trims, nod back to its spartan ancestor. But most importantly, the silly flower vase has been dispensed with!

The extra dimensions mean a roomier interior as well. The car seats four in relative comfort, although rear seats passengers will find headroom limited. Opening the rear hatch via the VW batch reveals a 310 litres boot space, up from 209 litres. Like most modern cars, folding the rear seats expands this to 905 litres, an extra 136 litres on the previous model.

Australia gets just a single model powered by a 1.4-litre twincharged TSI direct-injected petrol engine. It delivers 118kW @ 5,800rpm and 240Nm @ 1,500-4,500rpm and is matched with either a 6-speed manual or a 7-speed twin-clutch DSG transmission (tested here).

As it is based on the Mk6 Golf, it comes as no surprise that the Beetle drives well. Despite sporting a less sophisticated torsion beam rear suspension, body control is excellent. Its steering is well-weighted, albeit a bit slow and lacking in feedback. 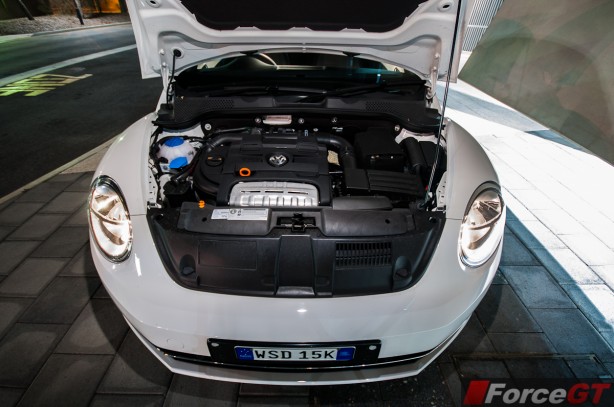 With almost the full amount of torque available from just north of idle, the Beetle launches with great enthusiasm and continues giving as the rev needle sweeps through its arc. At the same time, the DSG dishes gears out quicker than Mexicans crossing the American border.

Tip it into Sport and you get a properly engaging drive, with sharper throttle response and higher revs. The Extended Electronic Differential Lock (XDL) ensures the Bug keeps its intended line of travel through bends, with utmost conviction.

Around town, the drivetrain is impressively refined. Road noise is well suppressed and the ride is supple. The only annoyance is wind noise coming through the frameless windows, and low speed jerkiness typical of DSG gearboxes. 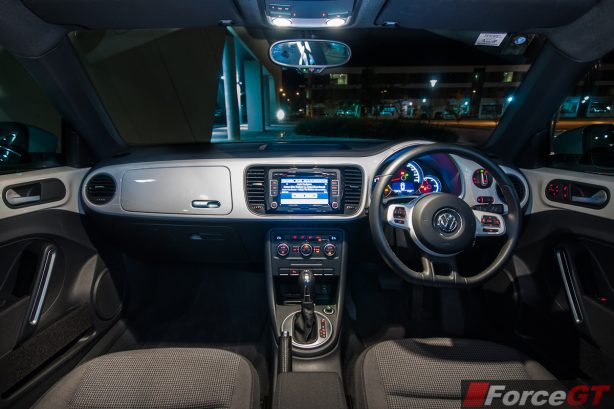 Although we can’t fault the Mexican-built Beetle’s quality, its finish isn’t up to typical Volkswagen standard. The dashboard is derived from hard scratchy plastics usually associated with bargain basement offerings.

Vanity and glovebox lights are also, uncharacteristically, missing from the car.

Although a brilliant drivetrain, the DSG especially, isn’t known for its reliability. However, the gearbox on our test car works flawlessly.

Volkswagen’s engines are some of the most efficient on the market today. Our test returned 8.2L/100km of 95 RON of mostly urban and spirited driving, with roughly 10 per cent spent on the freeway. 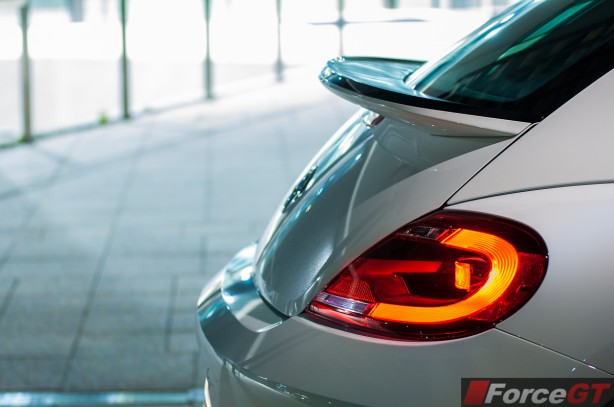 With tough new looks, an upmarket interior and decent handling, the Volkswagen Beetle is a stylish alternative to the bland looking Golf. If reliability is a concern, the slick 6-speed manual is the pick, with the added bonus of enhanced driver involvement.